After reunited with my two travel buddies in Cairo, our homeward odyssey official began. From Cairo, we flew to Athens, then to Zurich, before crossing the Atlantic back to Canada. In Greece, our plan was to spend a few hours to visit the Acropolis, had supper, and took a bit of rest before heading out to the airport. We expected to see some crowds at the world famous Acropolis, but watching hundreds if not thousands of cruise ship tourists wearing the same cap marching up the citadel hill right below us was still a shock. Despite the crowds, seeing one of the most recognizable icons of Western civilization was definitely an impressive experience.

The Acropolis is home to some of the most recognizable Classical Greek structures: the Parthenon, Propylaea, Erechtheion, Temple of Athena Nike, etc. Most of the Acropolis was constructed under Pericles during the golden age of Athens in the 5th century BC, the century that saw Athen’s victory against the Persians. The Acropolis was a magnificent collaborative work by architects including Iktinos, Kallikrates, and Mnesikles, and sculptors such as Pheidias, Alkamenes, and Agorakritos. This iconic hill was also the birthplace of democracy, philosophy, and theatre art of the Western world.

After seeing the Classical ruins, we headed down the northern slope to the Plaka quarter, a colourful and lovely neighbourhood full of lively restaurants, souvenir shops, and eye catching street art. In the evening, we picked a cosy restaurant for dinner. With English menus in hand, we ordered our dishes and I chose sirloin steak. The server tried his best to match our selections from his Greek menu. Somehow my sirloin steak was lost in translation and I ended up getting a whole grilled squid. It was a pleasant surprise and I had zero intention to swap it back to beef. The Mediterranean squid was fresh and delicious, and lived long in my memory. If it was a typical steak dinner, I would definitely not remember a single thing from that particular meal after all these years.

At 19:00 we bid farewell to the hostel staff and left Sultan Hostel of Istanbul.  We took the T4 bus from Hagia Sophia to the Taksim Square.  We headed over to the office of Kamil Koc and waited for the departure of our first night bus in Turkey.  At 09:00 the next day we arrived at Izmir, where we transferred to another bus for Bergama, the town where the famous Classical Greek city of Pergamon once stood in the 3rd century BC.  We hired a taxi from Bergama’s otogar (bus station) to the acropolis archaeological park.  I was quite excited for arriving at the ruined acropolis of Pergamon, largely due to my 2003 visit of Berlin’s Pergamon Museum, where the Great Altar of Pergamon was restored and displayed for the past 90 years.  Seeing the Great Altar of Pergamon in Berlin’ three years prior to the trip was probably the main reason why I chose to stop by Bergama on our way to Selcuk from Istanbul.  In the archaeological park, the acropolis where the high altar once stood was pretty much in ruins.  A few notable structures, including the Trajaneum (where a headless marble statue in Roman armor stood in a courtyard) and the Greek Theatre, claimed to be the steepest theatre in the ancient world, represented the highlights.  Near the base of the theatre lower, we stopped by the ruined Temple of Dionysus to pay a little respect to the God of pleasure and wine.

As the capital of Kingdom of Pergamon during the Attalid dynasty (281-133 BC), Pergamon was one of the major cultural centres in the Greek world.  After 133 BC, Pergamon became part of the Roman Empire, and assigned as the capital city of province Asia.  As trading routes shifted to Constantinople during the Byzantine era, the once Greek and Roman metropolis was transformed into a medium size city, but maintained its religious importance as it was mentioned in the Book of Revelations as one of Seven Churches of Asia.  Then came the Ottomans who transformed Pergamon into a Turkish city with mosques and bath houses that we know today.  From the first visit of German engineer Carl Humann in 1864 to WWI, the Germans had made numerous expeditions and archaeological excavations at Pergamon.  Most of their findings are now on display at Berlin’s Pergamon Museum.  After WWI, artefacts found on site were being restored and exhibited at Istanbul or the Bergama Museum.

Probably the most famous Classical artefact in Berlin, the Great Altar of Pergamon has been moved to and reconstructed in the German capital about a century ago.

The statue of Athena Parthenos was found in the ruins of Library of Pergamon in 1880.

Today, the most prominent remaining structure at the Acropolis of Pergamon is the Greek Theatre.  With a seating capacity of 10,000, the theatre was the steepest in the world.

Below the theatre lies the town of Bergama.

Off to the side at the base of the theatre once stood the Temple of Dionysus. 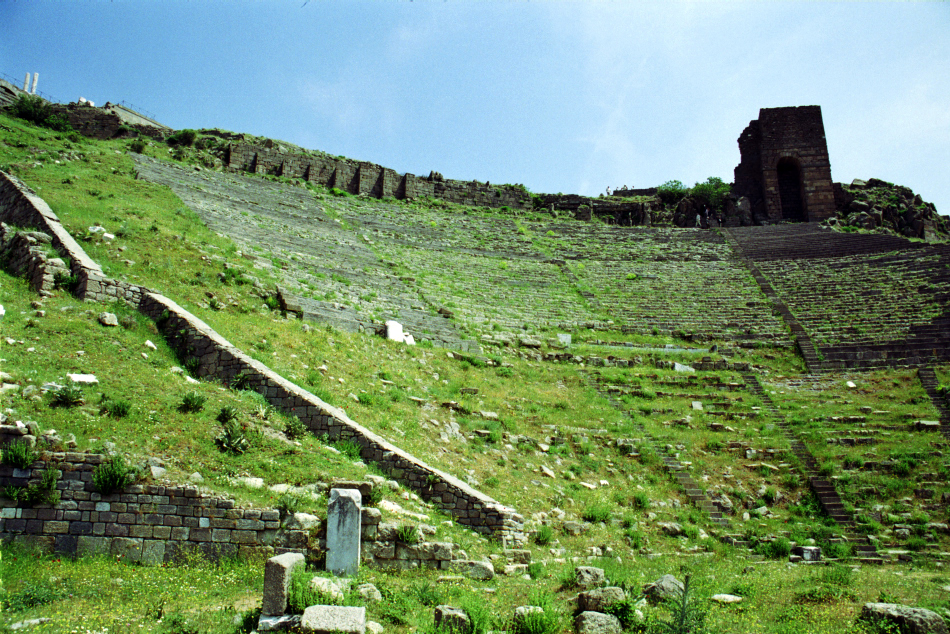 Looking up the theatre from the Temple of Dionysus allowed us to fully appreciate the scale and steepness of the theatre.

A series of stepped walkways allowed the ancient audience to disperse efficiently.

Fragments of classical cornice and frieze could be found all over the archaeological park.

One of the most remarkable structures in the acropolis is Trajaneum, the only Roman building on site. 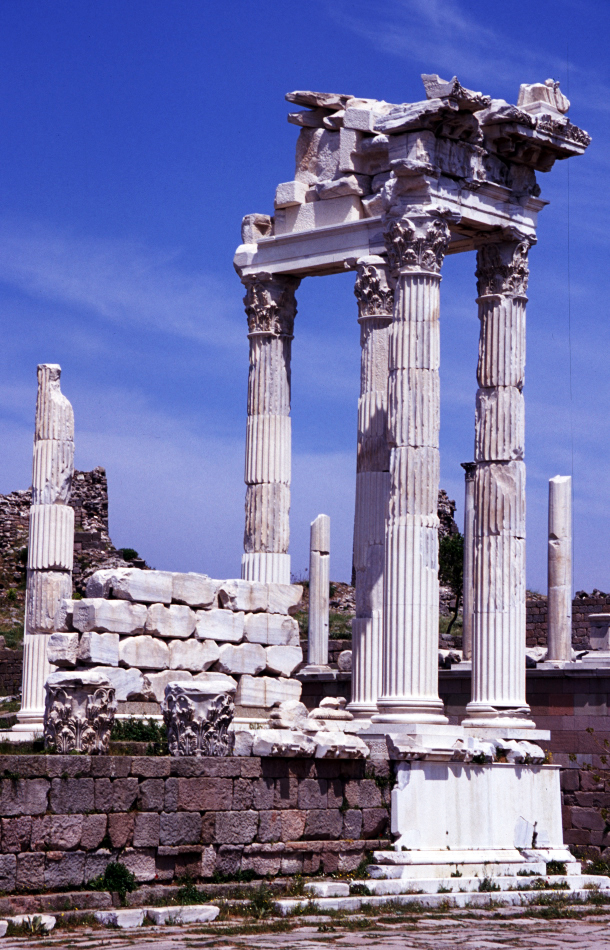 Completed by Emperor Hadrian, the Trajaneum was used to worship Zeus as well as  Emperor Trajan, Hadrian’s predecessor.

Occupying the summit of the acropolis, Trajaneum sent a clear message to the citizens of Pergamon that the Romans were fully in charge of the once Hellenistic city.

It was a pleasure to wander around the ruined acropolis and looked for the remaining architectural details.

The statue of Hadrian could still be found in the acropolis.