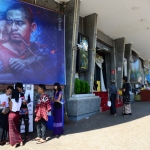 Yangon, formerly known as Rangoon, was the capital city of Myanmar (Burma) until 2006.  With 7 million inhabitants, Yangon remains as the largest city in Myanmar.  Because of our tight schedule, we only had a day to explore the downtown where decaying colonial buildings from the British era mingled with bustling daily activities of the locals, and the Shwedagon Pagoda, the religious heart and biggest tourist draw of the city.  Before that, we decided to first get a taste of the Burmese culture through sampling the local cuisine.  We weren’t particularly hungry, but would want to try out a well known noodle shop: 999 Shan Noodle House.  It was a half-hour walk to the noodle shop.  What’s better to get a quick Yangon impression than wandering its lively streets?

Venturing out of the Loft Hotel, we headed east towards the north-south thoroughfare Alan Pya Pagoda Street.  Local shops lined along one side of the street, while the opposite side was dominated by the large Park Royal Hotel.

One of the first building we encountered on Alan Pya Pagoda Street was Thamada (President) Cinema and Hotel.  Opened its door in 1958, Thamada was Rangoon’s most prominent cinema with a fully air-conditioned hall and a great example of the cuty’s Modernist architecture.

A number of snack vending carts were stationed in front of Thamada Cinema. 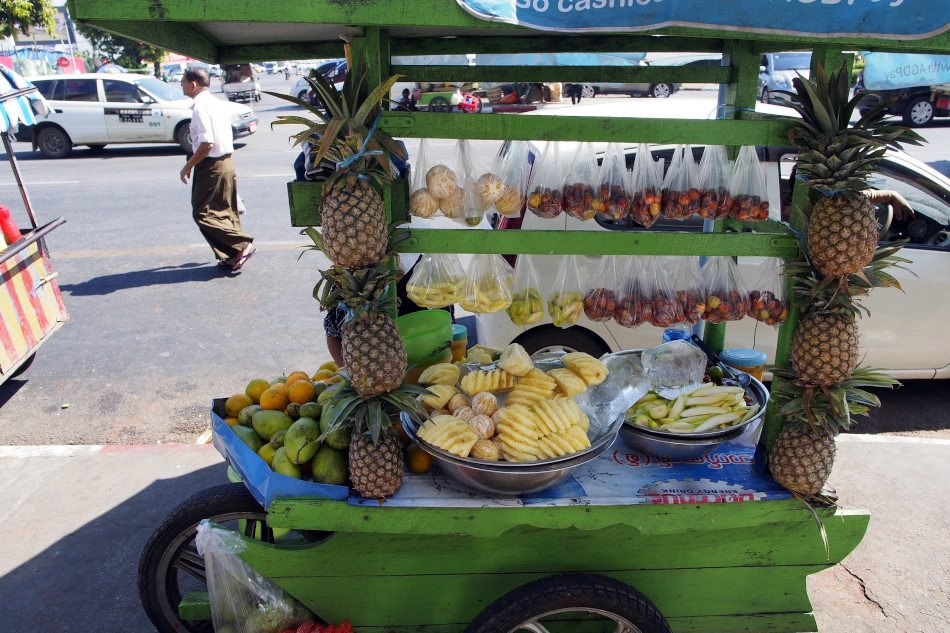 Other than skewers or salad, fruit is also common snacks in Yangon.

Renovated a few years ago, Thamada Cinema remains as a popular cinema in the present, drawing sell out shows from time to time. 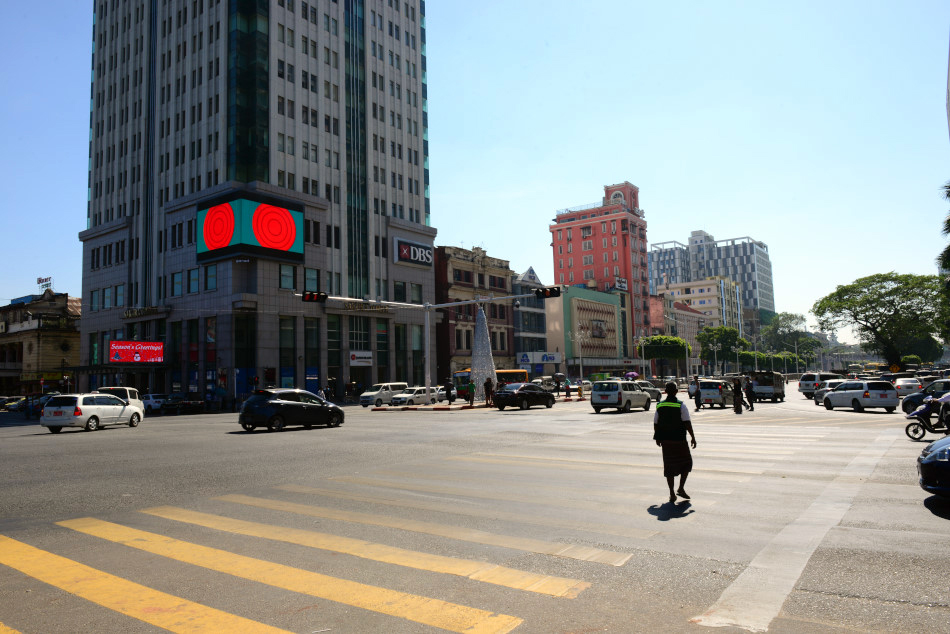 Further down the road we reached the intersection of Sakura Tower.  Built in 1999, Sakura is a 20 storey building built by Japanese investors and architects.  It offers office spaces up to international standards, with a restaurant at the top floor.  While the top floors struggled to find tenants in the first several years, Sakura is now totally full as Myanmar opens up in recent years.

Next to Sakura Tower, the 1910 Bible Society of Myanmar (British and Foreign Bible Society) was the heart of Christian evangelical society in the early 20th century.  In the 1960s, the foreign missionaries were expelled from the country, and was restructured in 1964 under national organization. 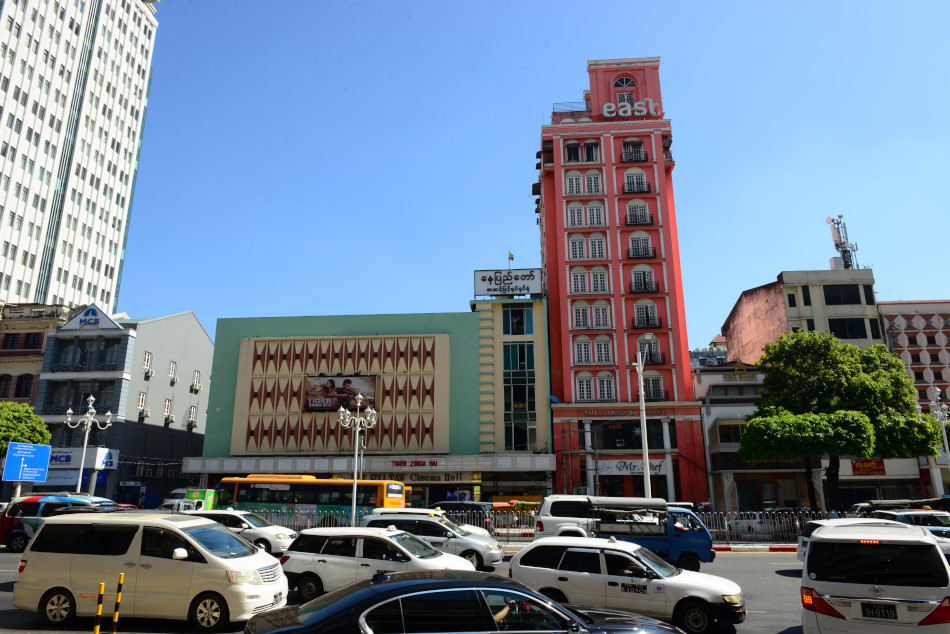 The strip of Bogyoke Road at Sakura Tower was known as Rangoon’s “Cinema Row” in the past, a designated entertainment district.  The Nay Pyi Taw Theatre with its iconic patterned facade was built in 1961.  Movie was and still remains big in Yangon (formerly Rangoon).  The modernist patterned facade was popular back in late 1950s and early 1960s in Southeast Asia. 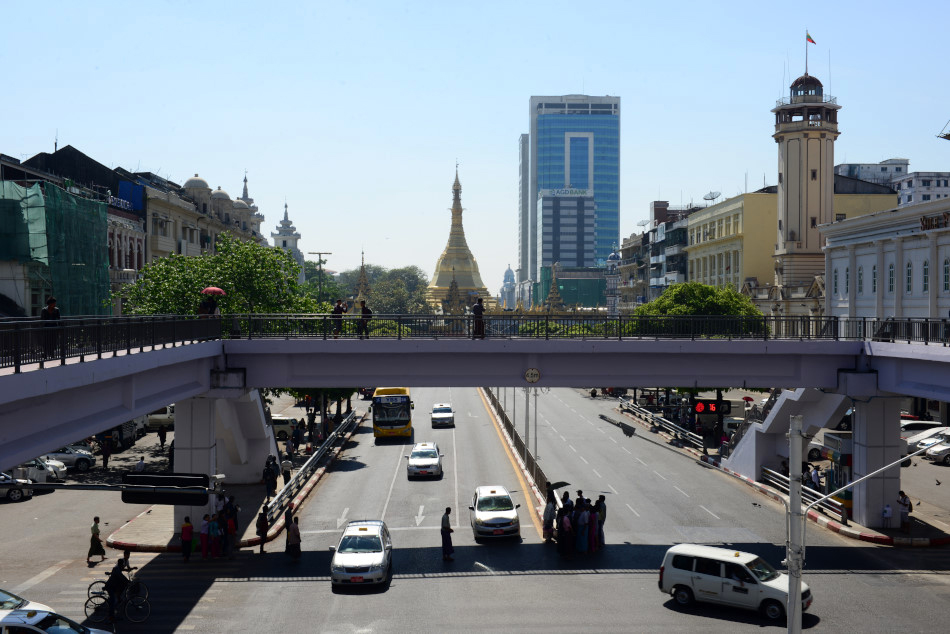 Further down we reached a busy intersection of Sule Road and Anawratha Road where a network of pedestrian overpass allowed us to gain a raised overview of this part of Downtown Yangon.

The overpass was occupied with vendors.  Pedestrians loved to stop by the railing for a look at the changing surrounding skyline.  Looking north, the top of Sakura Tower perched over the tree crown in the middle, and the Sule Shangri-La (Trader Hotel) dominates the the left side with its 500 rooms.  Built by Japanese and Singaporean architects, the hotel never really fulfilled its tourist potentials due to the West’s boycott on the junta government.  Rooms were sold at discounted prices. interestingly, it did attract a number of NGOs and UN agencies to set ups their offices here, and so as foreign journalists and some tourists.

At the southwest corner of the pedestrian overpass, a new 20 storey office building was under construction.

Further south we could see one of the city’s most important monument, the Sule Pagoda.  It is known to be one of the oldest monument site in Yangon, some said around 2600 years old.  Sule Pagoda has been and still is considered to be the heart of Downtown Yangon. 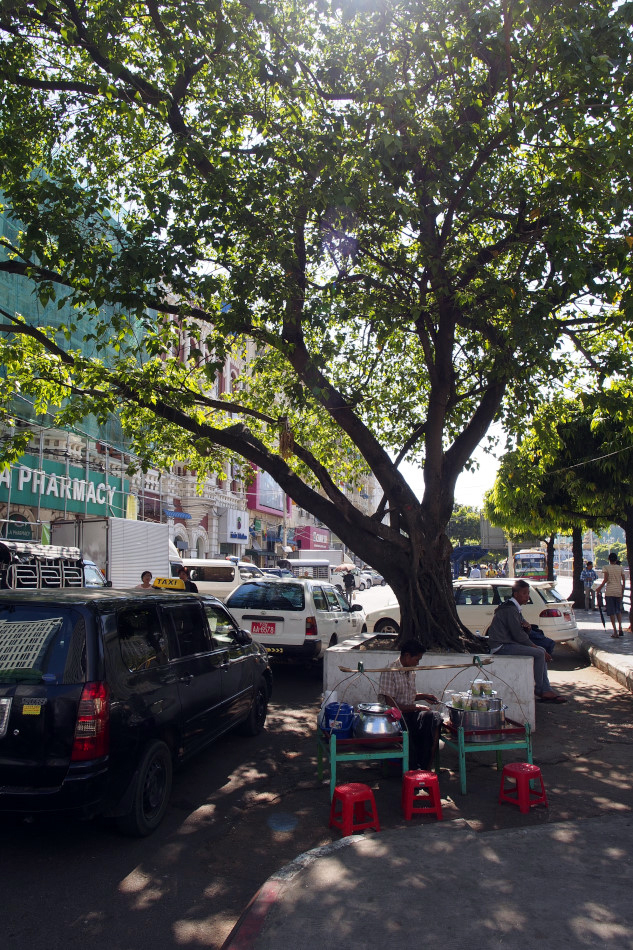 After a moment above the streets, it was time for us to return to the busy street scenes. 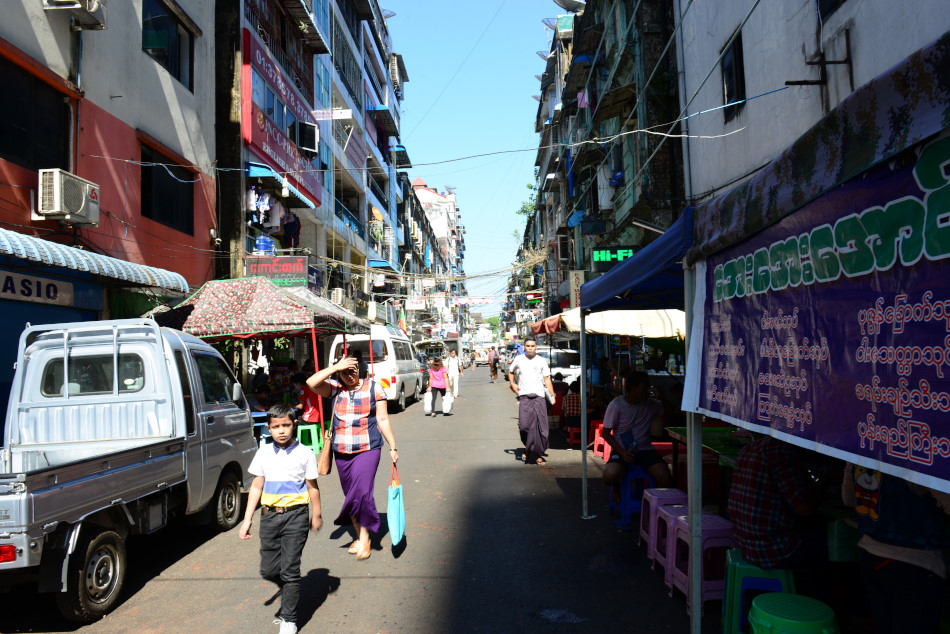 As we approached 999 Shan Noodle House, we began to explore the network of small side streets behind Yangon City Hall.

All side streets were flanked by buildings dated back to British Rangoon. 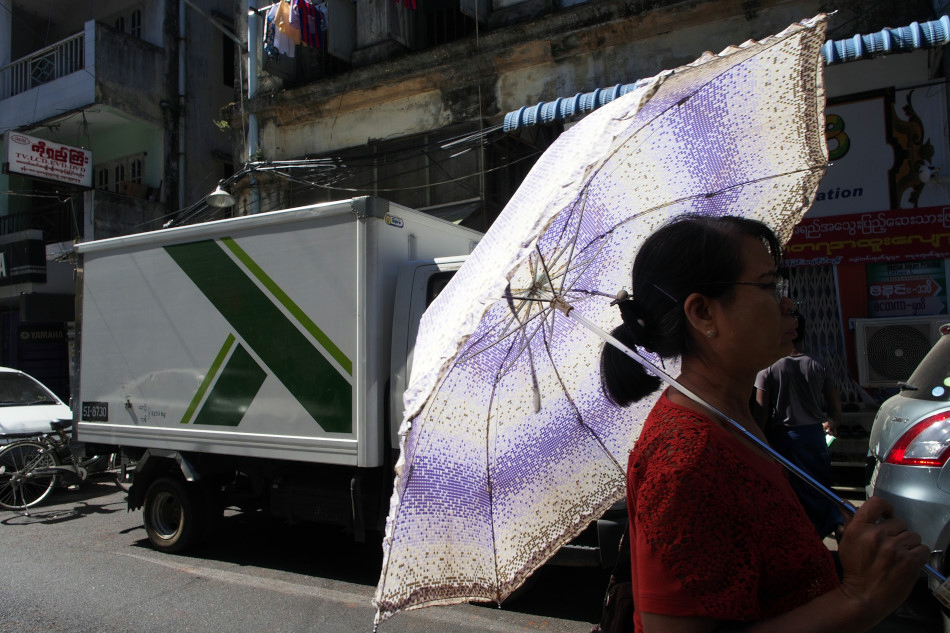 It took us several minutes to reach the right side street of the noodle house.  It was fortunate that we had portable wifi device and mobile phone which we could get on Google Map.

Food vendors could be seen on many of these side streets.  Groups of children monks were also a common sight.

After a little over half an hour of walk, we finally reached our destination – 999 Shan Noodle House.  999 is a famous restaurant in Yangon specialized in dishes from the Shan and Kachin States at Northern Myanmar.  These states border with Yunnan Province of China, which is also popular with rice noodle dishes.

The pig knuckle noodle soup was tasty, and the pork texture was just right.

After lunch, we continued to walk down the side street towards Yangon City Hall.

At the end of the street we again passed by a food vendor.  They seemed to be everywhere in Downtown Yangon, especially at the end of side streets.