Getting up at 4am wasn’t the easiest thing to do, but the temptation of watching the sunrise over the sea of clouds of Huangshan was too difficult to resist.  Given the wet weather the day before, we weren’t too optimistic about seeing the perfect sunrise.  We put on our headlamps and raincoats, carried our cameras and hiking poles, and headed out into the dark.  The air was filled with light drizzling and mist.  We decided to go ahead despite the unpromising weather.  In the dark, we hiked for about half an hour before reaching Shilin Hotel (獅林大酒店), from where a small path would lead up to Lion Peak (獅子峰), our intended spot to watch sunrise.  Followed by another small group of tourists, we found our way up the small path, passing by Refreshing Terrace (清涼台), a popular sunrise hotspot that was already filled with people.  We walked further up hoping to reach Lion Peak, but soon found out that the path to Lion Peak was fenced off.  We had no choice but switched to another lookout nearby called the “Monkey Watching the Sea” (猴子觀海).

There were half a dozen or so people at the lookout when we arrived.  We shared a rock with a woman from Shandong.  We chatted a bit as more people cramped onto the lookout.  The cloud was thick and the fog never went away.  From 5:45am to 6:15am there were a few moments when the fog subsided a little, exposing the silhouette of the rocky peaks of Huangshan’s Beihai (北海) area.  Adjacent to the lookout we could see a small rock standing on a flat mountaintop that resembled a monkey in sitting position.  This scene is known as “Monkey Watching the Sea” (猴子觀海).  No rising sun from the horizon nor vivid skies, our Huangshan sunrise experience was limited to a few moments of mountains emerging from heavy fog.  We left the lookout and returned to our hotel for breakfast.

After checking out, we began our hike over to the south side of the summit area, where a number of the popular attractions gathered.  In the fog, we slowly found our way to Yuping or Jade Screen (玉屏) Cable Car Station for our ultimate descend.  We first hiked up to Bright Summit Peak (光明頂).  At 1,840m, Bright Summit Peak is one of the highest points in Huangshan, and it also serves as a circulation hub where a few paths converge.  Everything was completely covered in fog when we reached Bright Summit Peak.  We didn’t stay long as the top was really noisy and crowded.  We followed the sign pointing to Jade Screen Scenic Area.  First we reached Turtle Peak (鳌鱼峰).  We stopped atop the “turtle shell” for a few minutes, though all we could see around us was white fog.  We continued our journey and next we reached “Ladder on the Clouds” (百步雲梯), a steep rock stair that led us up to another high point.  This side of the summit area was way more crowded with local tourists than the West Sea Canyon we visited the day before.   Again because of the fog, we didn’t stop for long.  Our next stop was Lotus Stamen Peak (蓮蕊峰), from where a steep stair could be seen leading to the famous Lotus Peak (蓮花峰).  It was unfortunately closed as well.  Continuing our journey, we finally reached Yuping Scenic Area where the granite mountains were renounced for their resemblance a Chinese screen made of granite stones.

Before we went for Yuping cable car we decided to check out the famous “Welcome Pine” (迎客松).  Renowned as the welcoming feature for all travelers since ancient times, the “Welcome Pine” has long been the star of Huangshan.  Unfortunately, due to its fame came its misery.  All local visitors love to get close to the tree for a photo.  Sometimes, they may get a little too close and actually damaged the tree and its roots.  Nowadays, the fragile “Welcome Pine” is fenced off and artificially reinforced.  At least it is more fortunate than the nearby Farewell Pine (送客松), which died a while ago.

After “Welcome Pine” and a brief stay at the Yuping area, we felt it was time for our descend, as we were hoping to catch a bus from Tangkou to Hangzhou, where we would stay the last night of our trip.  It was awfully foggy and wet during our stay at the summit area of Huangshan, but we had a good taste of its spectacular granite formations, and a few magical moments of poetic scenery. 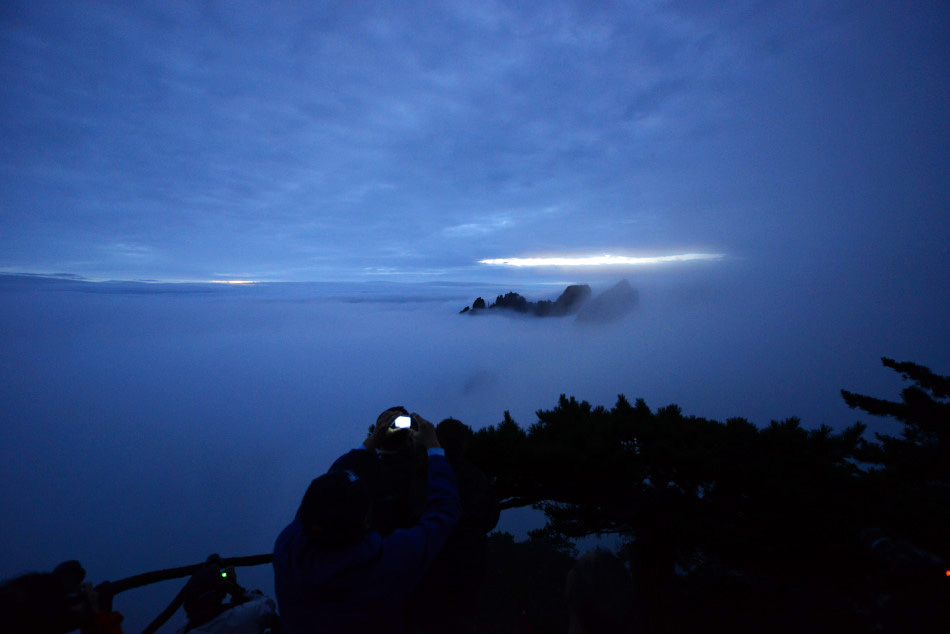 The first magical moment when the fog subsided, exposing the silhouette of the rocky peaks of Huangshan’s Beihai (北海).

From the lookout, we could see the rock formation “Monkey Watching the Sea” (猴子觀海). The sun was slowing rising above the horizon in behind.

This was the clearest moment we had during our wait for the sunrise. 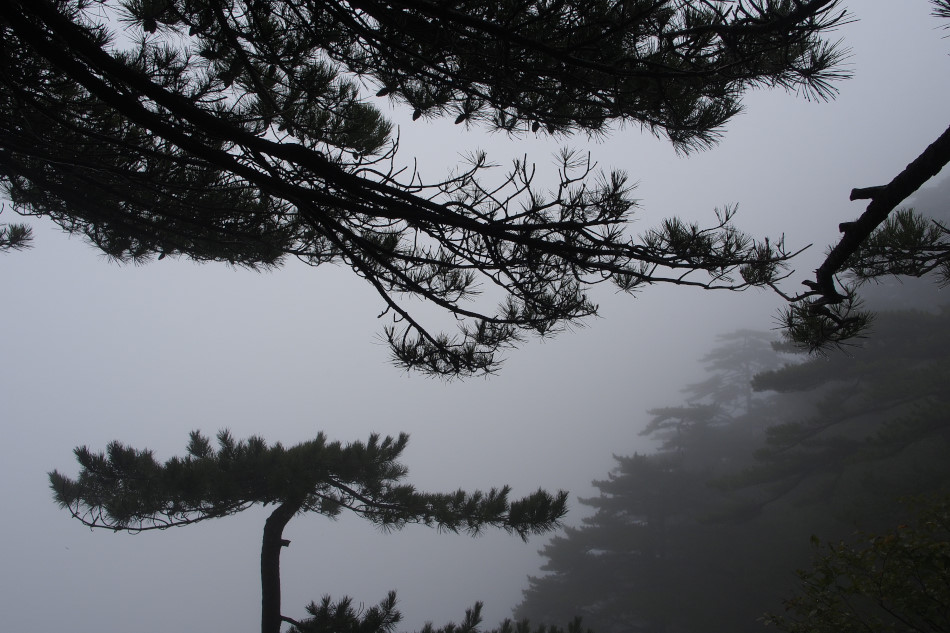 Layering of pine trees in thick fog.  Pinus hwangshanensis, or Huangshan Pine, is indeed an endemic species found only in Eastern China.

Although we could not see the perfect sunrise but we found ourselves lucky to have a few glimpses of the granite peaks in the sea of cloud in such bad weather.  After watching the sunrise, we enjoyed the quiet morning walk back to our hotel for breakfast. 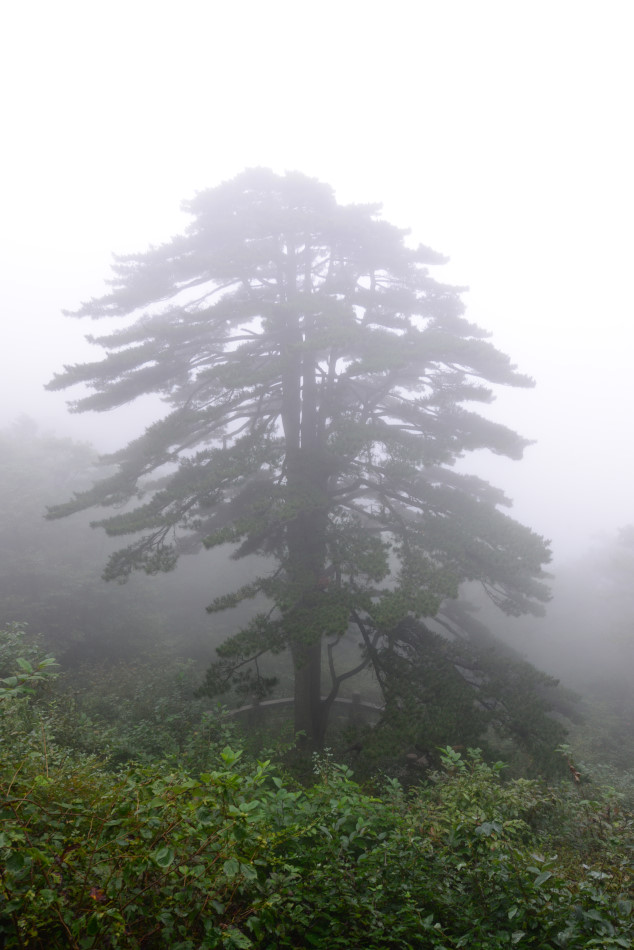 The Couple Pine (連理松) is a unique attraction especially for couples.  Most of the pine trees that we saw were oddly shaped with a few long branches stretching out but the Couple Pine is actually consisted of two tall trees with similar height and branch arrangement.

It was sometime difficult to distinguish which rock formation was natural and which was man-made. Some natural rock formations were too perfect that it had an artificial feel to it.  This was indeed the “head” of the Turtle Peak (鳌鱼峰).

This stretch of the trail was the most frustrating because of the crowd and the noise. This trail links a number of famous spots of the Yuping area, and inevitably it is very popular among day trippers and tourist groups. There were moments of sun-break. When the sun was out, it was scorching hot with the humidity.

The stone steps are leading up to the Lotus Peak (蓮花峰), the tallest peak at Huangshan. On the day of our visit, it was closed to visitors for maintenance.  Many said that Lotus Peak and Heavenly Capital Peak (天都峰) open to visitors alternatively.

The further down we got, the thicker was the fog. Visibility was low and everything was veiled with a greyish tone.

This path is leading down to the foot of the mountain from the Welcome Pine (迎客松) area. Since we had to catch the long distance bus to Huangzhou, we decided to take the cable car.

The famous Welcome Pine (迎客松) – in the far background on the left – is a magnet to the local tourists. Because of its popularity, this ancient pine tree has been heavily visited and is starting to show signs of decay. Today, special rule is in place to keep tourist crowd away from the pine tree.

A closeup of the pine needles.

Standing on the small terrace in front of the cable car station, we fixed our gaze on the moving Yuping cable car disappearing in the mist one after another.  We found the scene very romantic.

In bright sunny day, we could see better and further but the foggy weather gave a mysterious atmosphere to our Huangshan visit.

Ticket office at the Yuping cable car station on the summit. The design of the station is hardly a complement to the contemporary design of the cable car.

The cable car ride down to the mountain was quite comfortable.  It wasn’t the most crowded time of the day and we were delighted to have our own car. The cable car was designed by Austrian Doppelmayr Seilbahnen GmbH, a leading cable car manufacturer. The design gave visitors a panoramic view of the natural scenery.