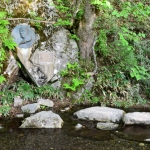 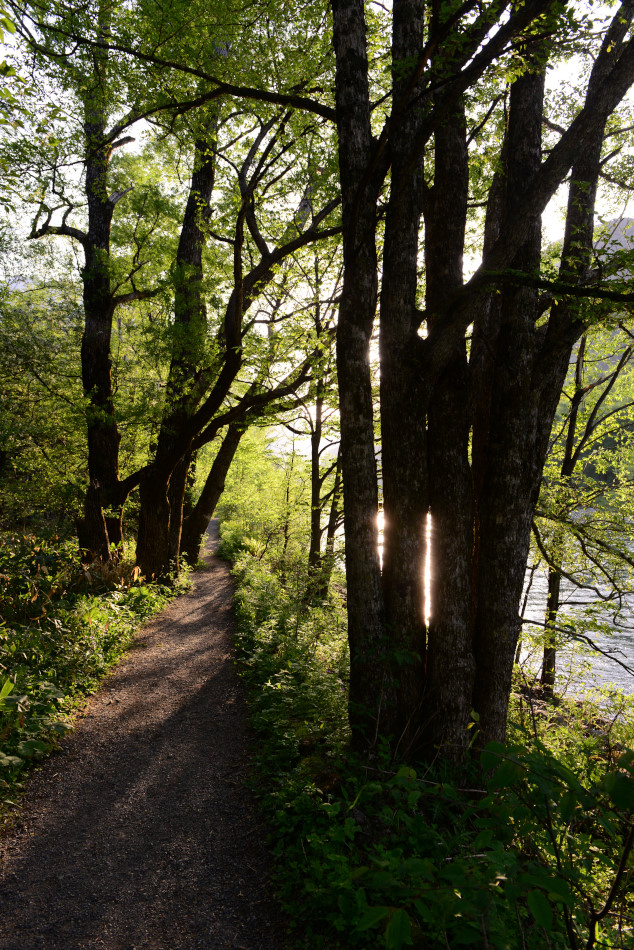 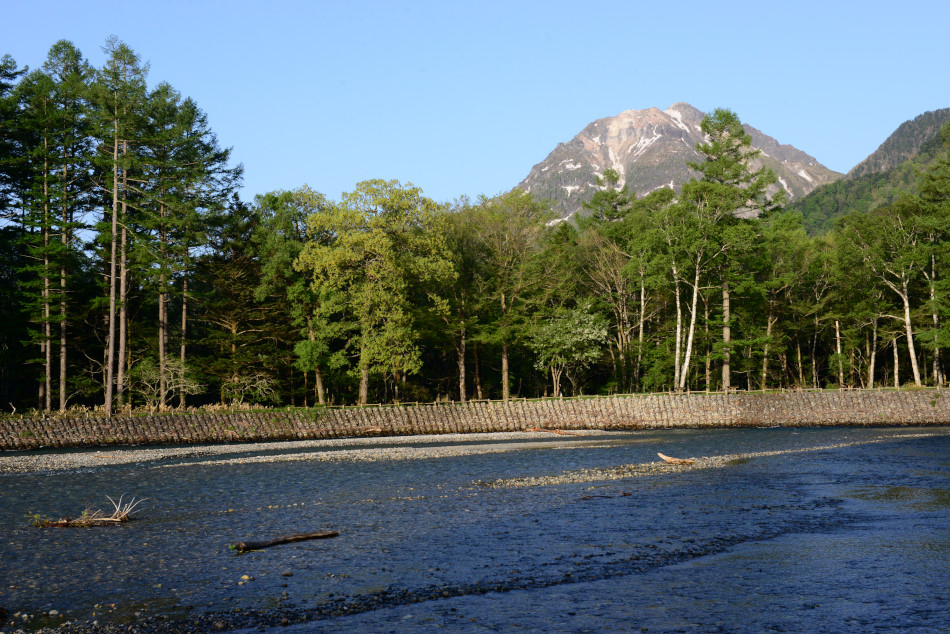 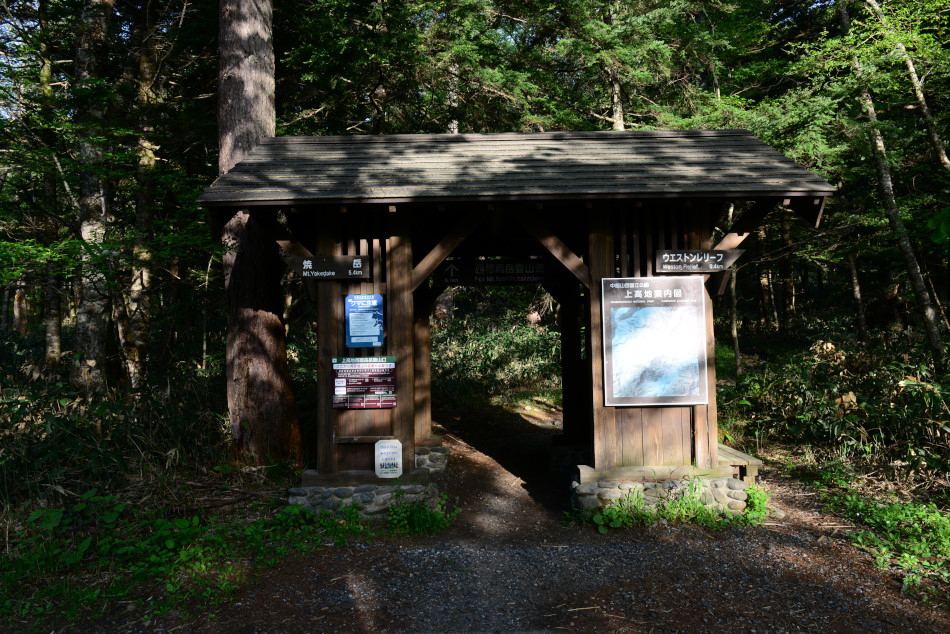 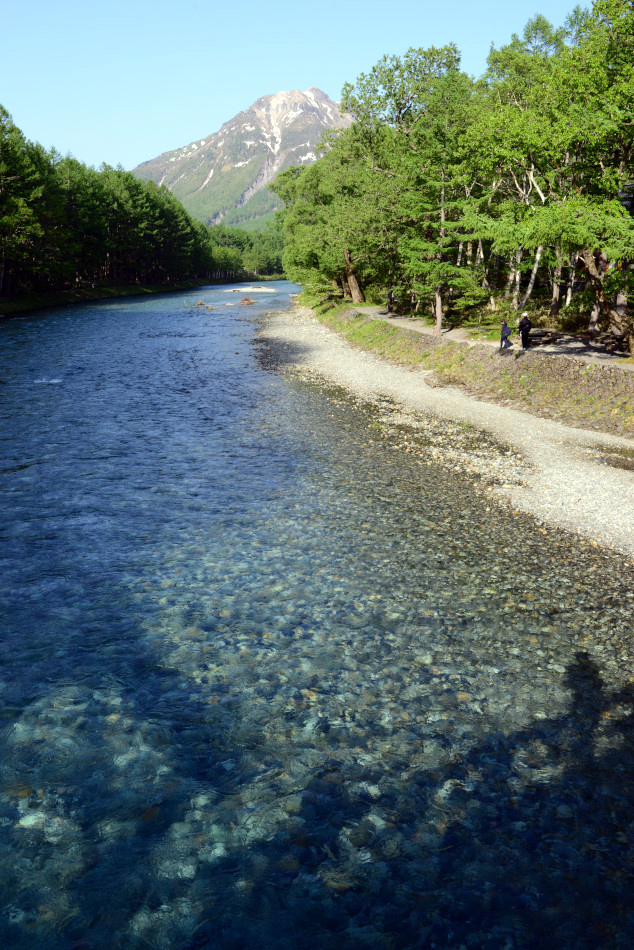 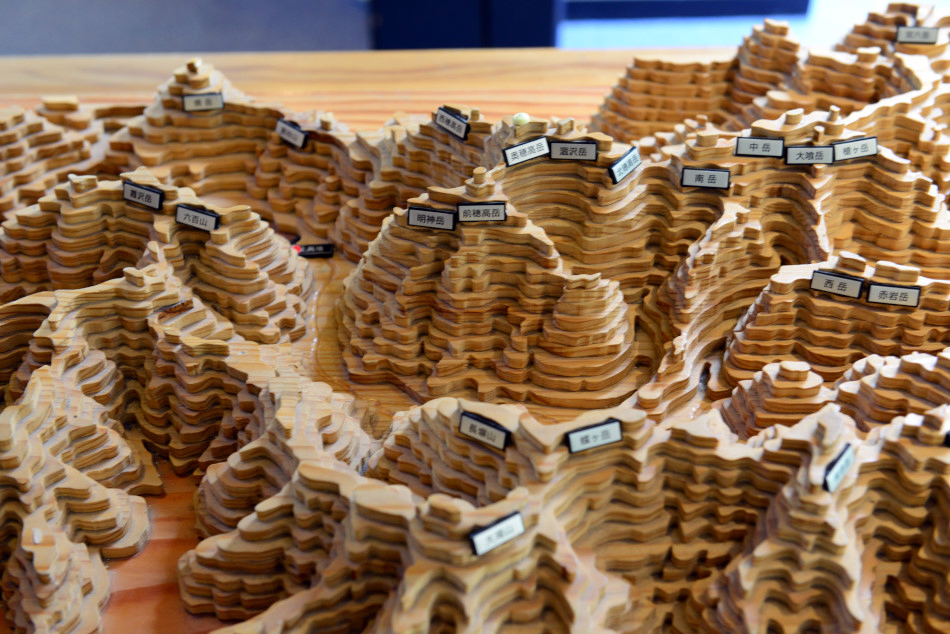 Sometimes referred to as Japan’s Yosemite, Kamikochi (上高地) in the Chūbu-Sangaku National Park (中部山岳国立公園) is a picturesque valley in the Hida Mountains (飛騨山脈) or Northern Japan Alps.  With an altitude of 1500m and a length of 18km, Kamikochi is bounded by Mount Hotaka (穂高岳, 3190m) to the north and volcano Mount Yake (焼岳, 2455m) to the south.  The turquoise water of Azusa River (梓川) flows through Kamikochi and passed under the famous Kappa Bridge (河童橋) where most tourists gather when they arrive.  Chubu Sangaku National Park was established in 1934 for natural conservation.  As the crown jewel of the national park, Kamikochi sits in the midst of alpine peaks, marshlands and hiking trails.

Most visitors come to Kamikochi from Matsumoto (松本) or Takayama (高山).  A traffic regulation was introduced in 1975 to prohibit tourists to enter Kamikochi in their own cars.  Most visitors arrive in Kamikochi by bus, either directly from a nearby town or from a bus stop next to one of the many parking lots along the main road.  A wide range of accommodation options are available in Kamikochi, from campsites to luxurious resort hotels.  We chose a mid-range mountain lodge called Nishi-Itoya Mountain Lodge (西糸屋山荘) near the Kappa Bridge.  At the heart of Kamikochi, Kappa Bridge (河童橋) is the most important landmark in the valley.  First built in 1891, today’s Kappa Bridge is the fifth iteration of the original.  There are eateries, souvenir shops and convenient stores at either side of the bridge for hikers to stock up supplies and fill up their tummies. 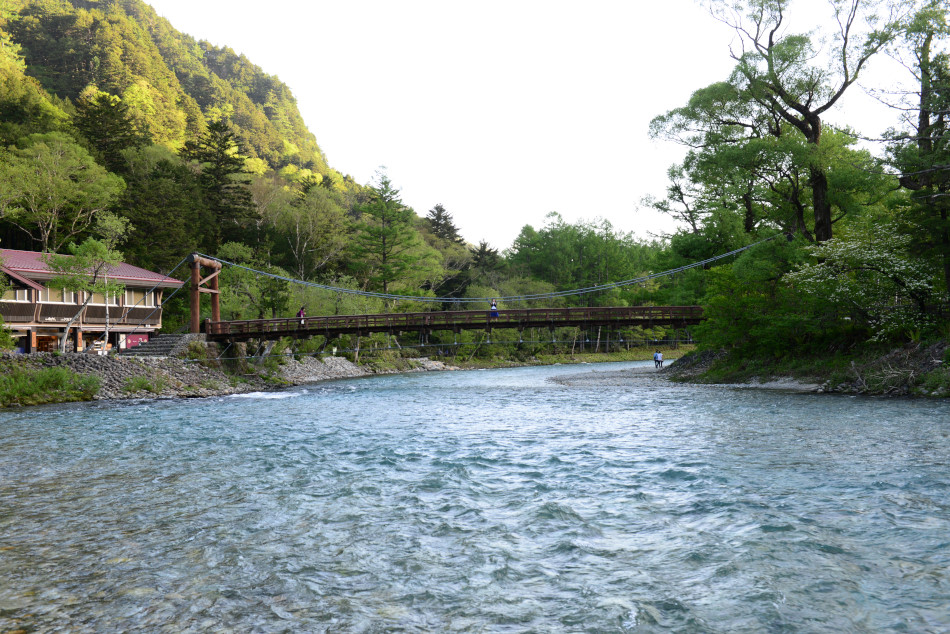 We were delighted to arrive in Kamikochi in perfect weather.  We immediately fell in love with the crystal clear water of Azusa River (梓川).

Just a few minutes walk from the bus station, we arrived at the famous Kappa Bridge (河童橋).  In Kamikochi, the bridge serves as the most important landmark. 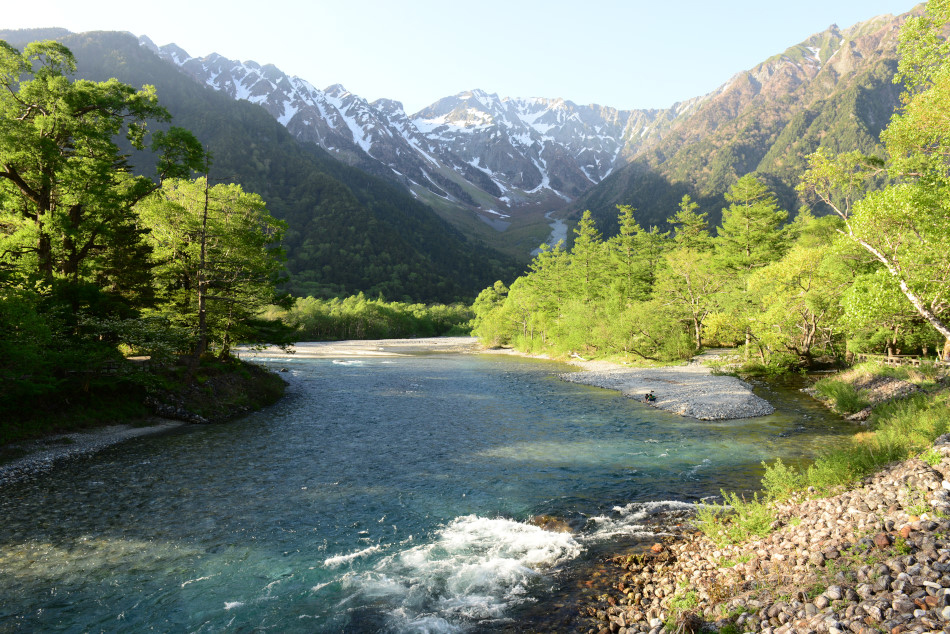 Standing at the Kappa Bridge, the iconic view of Mount Hotaka (穂高岳) and Azusa River (梓川) was quite impressive.

Looking out Kappa Bridge to the opposite side from Mount Hotaka, we could see the mighty volcano Mount Yake (焼岳). 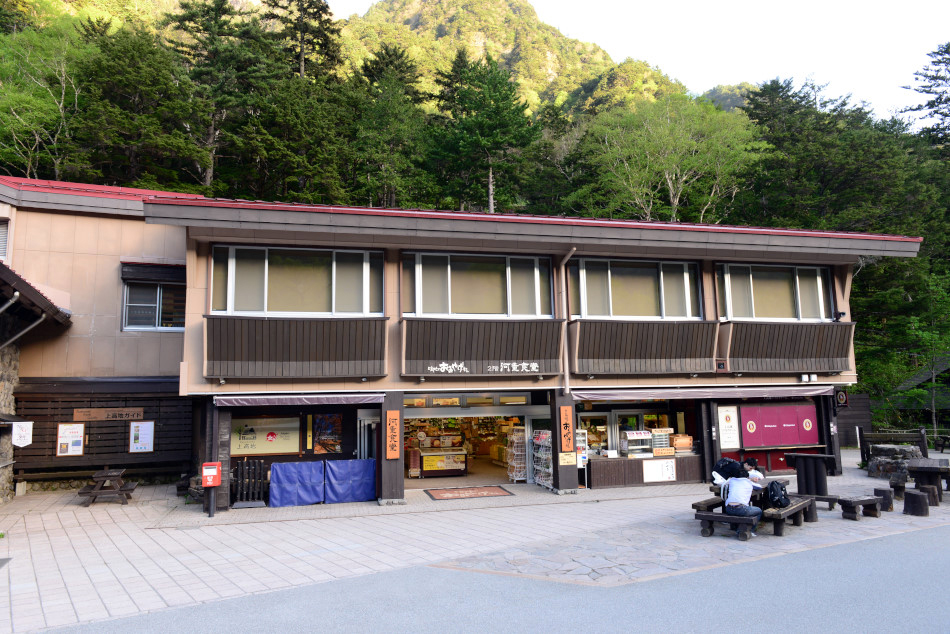 Shops right by the Kappa Bridge carry everything from snacks to souvenir.  We got ourselves local yogurt, juice and beer for the night.

A few minutes walk from Kappa Bridge, we arrived at Nishi-Itoya Mountain Lodge (西糸屋山荘) where we would stay for two nights. 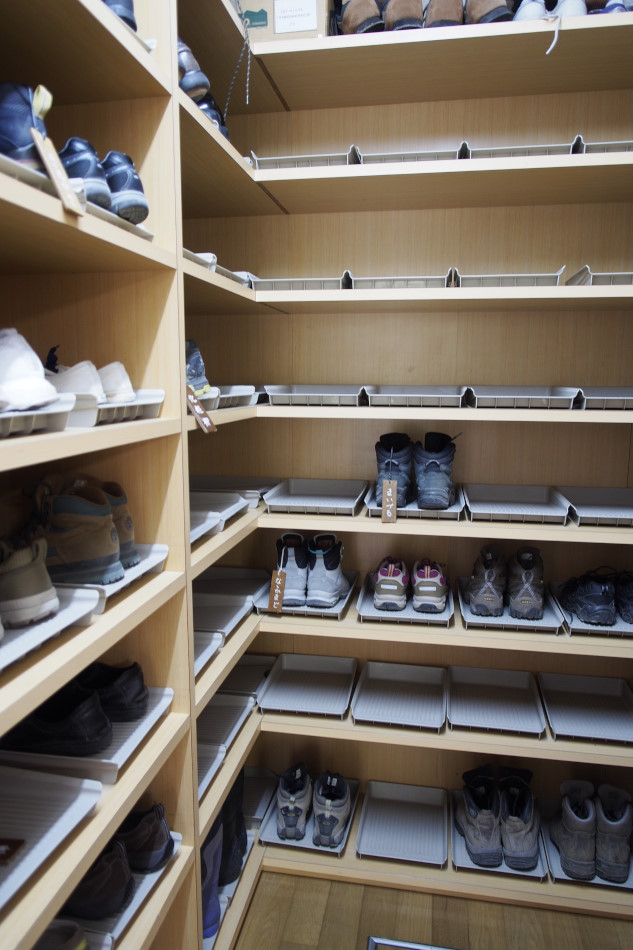 We took off our shoes at the vestibule and left them in the shoe storage room.

The spacious lobby of Nishi-Itoya Mountain Lodge was mainly finished in wood.  A heater near the reception reminded us that it could get quite cool after sunset.

Next to the lobby there was a small cafe and souvenir shop.

On the upper level, we had high anticipation for the common baths, where users could enjoy the hot mineral bath and magnificent views of the snow capped Hodaka Mountains at the same time.

Since 7am in the morning, we departed from Shinjuku Station of Tokyo, made a whirlwind tour of Matsumoto and hopped onto a train followed by a bus into the Hida Mountains, and at last arrived at our hotel room in Kamikochi in the late afternoon.

The private room in Nishi-Itoya Mountain Lodge (西糸屋山荘) was clean and spacious.  The setting was relaxing and the room was filled with fragrant of the tatami flooring.

At about 18:30, we went downstairs to the dining hall for dinner.

Just like many hotels in Kamikochi, the food served by Nishi-Itoya Mountain Lodge mainly came from the surrounding area.

After dinner, it was time to shoot some night photos.  Unfortunately, the moon was already up and relatively bright.

Tourists still gathered at the Kappa Bridge despite the darkness.

Standing on the Kappa Bridge, the picturesque view of Kamikochi was enhanced by the lights from lodges along the river.

Despite the bright moon, we could still see some stars at the darker areas in the sky.

I set up the tripod facing Dakesawa (岳沢) and Mount Hotaka (穂高岳) to capture the starry night.