We both felt asleep on the train back to Tokyo.  The normally popular tourist district of Asakusa (浅草) was largely deserted by the time we walked out Asakusa Station at around 9pm.  We didn’t want to return to our hotel yet.  We decided to wander around Asakusa, from the world famous Kaminarimon (雷門) of Sensoji (金龍山浅草寺) to the inner streets of dining, shopping and entertainment district of Rokku.  Most shops were closed except for some restaurants and street eateries.

The buildings and streetscape around Tobu Asakusa Station reveal the former glory of Asakusa when the district was a foremost area in Tokyo.

Tokyo Skytree and Philippe Starck’s Asahi Beer Hall stood out in the skyline beyond.

Surrounded by scaffolding, the Kaminarimon (雷門) of Sensoji (金龍山浅草寺) found a moment of peace with the absence of tourists. 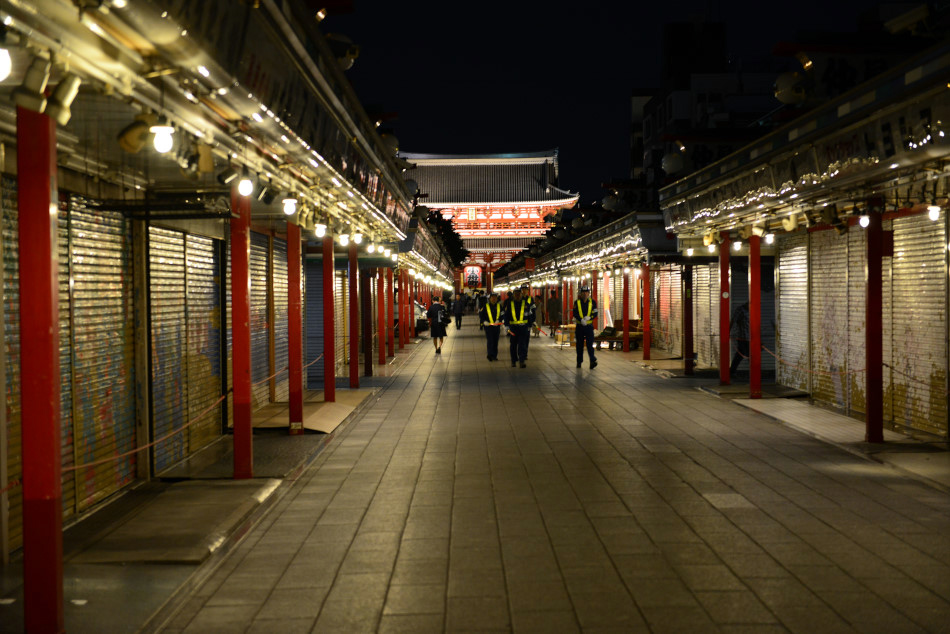 The 200m Nakamise (仲見世) Shopping Street closed for the night.  Security guards were checking the shopping streets to ensure no visitor stayed behind.

From Nakamise (仲見世), we entered a side street (雷門柳小路) into the grid network of small streets of restaurants, cafes, and bars.

Orange Street (オレンジ通り), a street famous for its orange paint lies at the centre of the dining and entertainment area of Asakusa.

Some restaurants in the area still maintains the atmosphere of the prewar days. 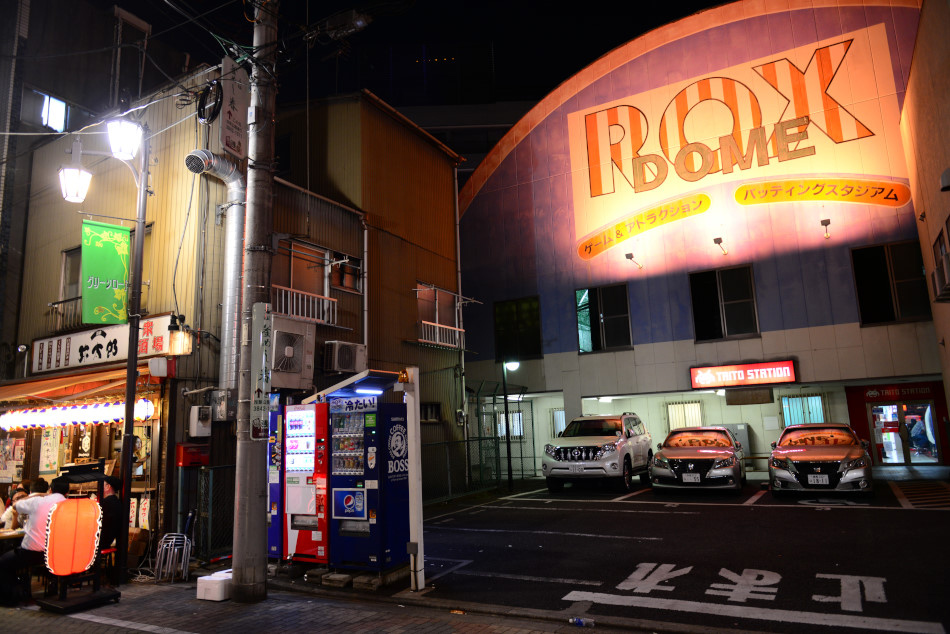 In contrast to the spirituality and history of Sensoji Temple just a few blocks away, the Rox Dome is a popular indoor batting stadium. 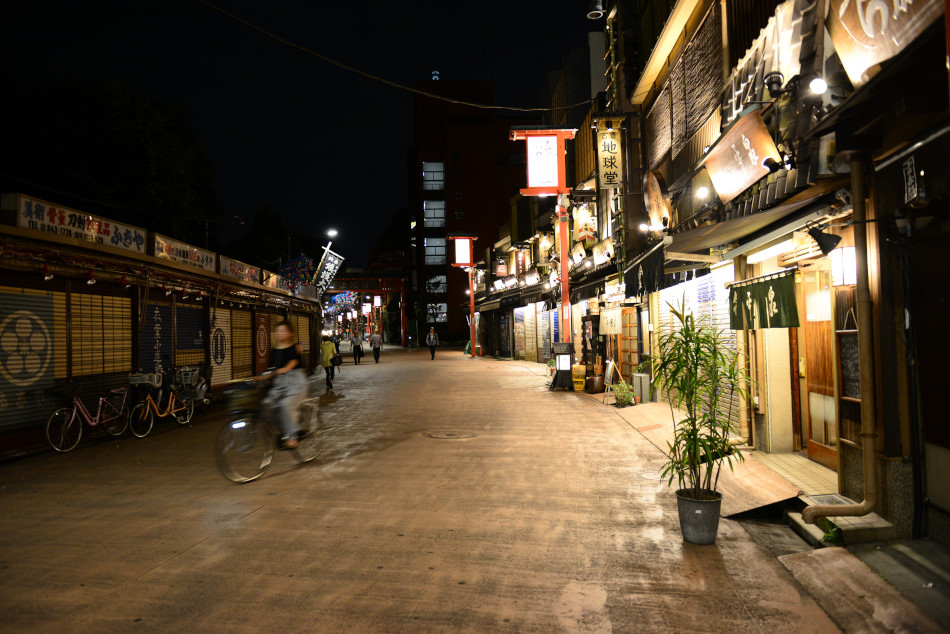 The atmospheric Dempoin Dori (傳法院通) offers a glimpse of the former theatre and entertainment district.

Not many pedestrians were around at Dempoin Dori.  However some of the restaurants were still open.  The traditional shopfronts reminded visitors the appearance of the lively high street during the prewar years. 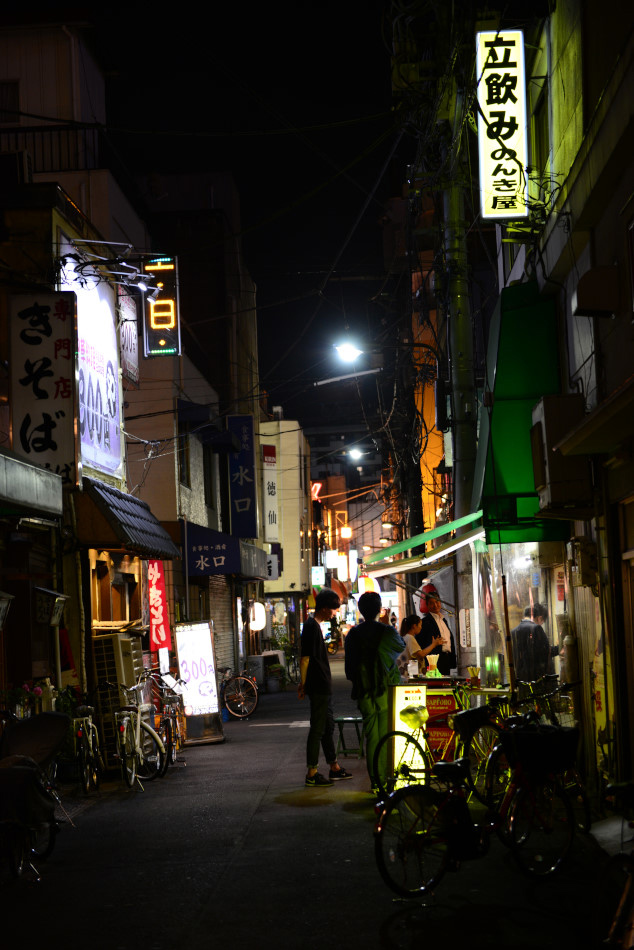 Despite its decline in the postwar years, Asakusa remains an interesting place to stroll around and get a feel of Tokyo’s history and its vibrant dining scenes.

Today, the Rokku area is still a focus of dining and entertainment experience, with outdoor eateries here and there near the junction of Don Quijote Department Store.

Most shops were closed for the night, but the street-side eateries were still quite lively when we were there. 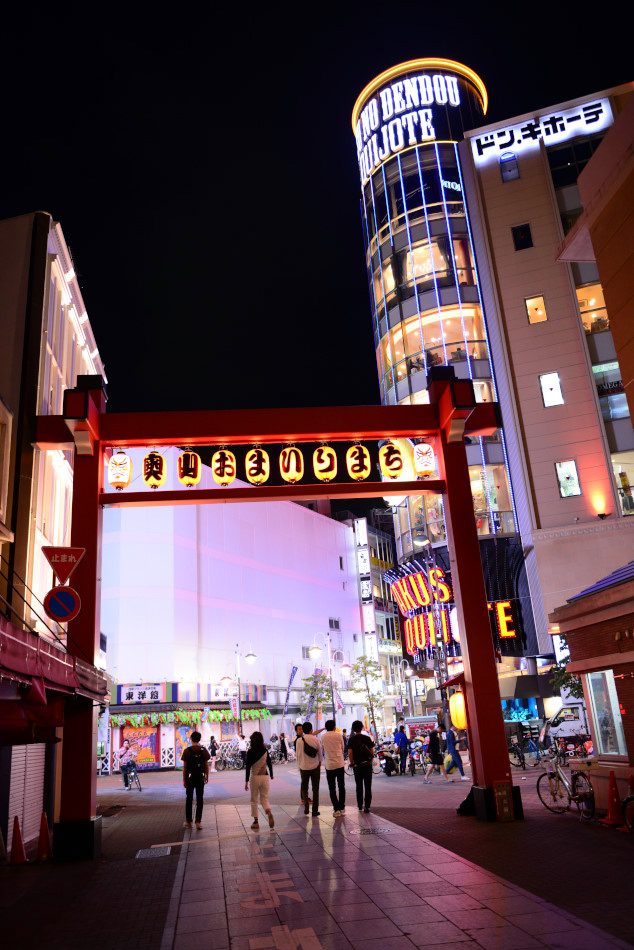 The junction in front of Don Quijote Department Store was brightly lit up by neon lights of theatres and shops.

Apart from the street eateries and traditional shops, there are also covered arcades in the area providing another alternative shopping experience.

After strolling for an hour or so, we headed back to Asakusa Station and took the metro back to Shibuya.  Passing by the narrow alleyways near the station, the Tokyo Skytree across Sumida River could be clearly seen at the street end, revealing a new chapter of shopping and entertainment just a stone throw away from Asakusa.