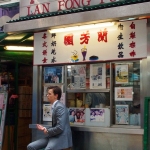 In 2016, “dai pai dong” was added as a Hong Kong English term in the Oxford English Dictionary, referring as “a traditional licensed street stall, typically with a small seating area, selling cooked food at low prices; (now more generally) any food stall of this type.” The term “dai pai dong” 大牌檔 literally means “big license stall”, which attributes to their bigger license paper compared to other street vendors. In Chinese, “dai pai dong” can also be written as 大排檔, meaning a “row of line-up stalls”. Street hawkers have been around in Hong Kong for over a century. The number of street hawkers increased dramatically after WWII, when unemployed citizens were eager to make a living by setting up all sort of vendor stalls on the street, including food stalls. In response, the government put forward “dai pai dong” licenses as a measure to regulate and standardize the food stalls. During its heyday between 1950’s to 1970’s, some say there were more than 3000 dai pai dongs across the city. To control street hygiene, avoid traffic congestion and give priority to urban developments, the government stopped issuing dai pai dong licenses in 1956, and restricted license transfer to spouse only, eliminating the chance of passing the business down the generation. As the city’s economy boomed in the 1960’s and 1970’s, dining options exponentially increased. Along with the government’s constraints and fierce competition of dining options, undesirable hygiene, absence of air conditioning, and the relatively crowded seating have all led to the dwindling of dai pai dongs. In 2011, there were 28 dai pai dongs left in Hong Kong: Central (10 stalls), Wanchai (3 stalls), Sham Shui Po (14 stalls), and Outer Islands (1 stall). From one of the most popular causal dining options in the 1960’s to a disappearing urban heritage that appears as diorama in history museums nowadays, the rise and fall of dai pai dongs reflects the rapid evolution of Hong Kong in the latter half of the 20th century.

Often promoted as a unique component of Hong Kong’s culinary heritage, scenes of dai pai dongs are often displayed as backdrops in museums and amusement parks. A typical dai pai dong consists of a 4′ x 6′ green metal stall used as kitchen, and a long bench topped with three small wooden stools as extra seating. In the past, the number of customers was restricted to two folding tables and eight portable chairs. Opened for breakfast, lunch, dinner or late night meals, dai pai dong may serve congee, noodles, stir fry, dessert, and/or coffee/tea. Despite street stalls are disappearing fast, dai pai dong dishes and their cooking techniques have been well preserved at many neighbourhood restaurants in Hong Kong. Often described as good wok hei (鑊氣), which literally means excellent “breath of wok” or the rich aroma and flavour of the wok, the spirit of dai pai dong cuisine remains as one of the essential aspects of the local cuisine. While the taste of dai pai dong may live long, it is the vibrant street ambience, the causal interactions with vendors and fellow customers, and the carefree dining experience topped with cheap beer and loud laughter that would certainly be missed.

Man Yuen Noodles (民園麵家), a former 80-year old dai pai dong in Soho, Central, was the spark that ignited the city’s attention on dai pai dong conservation. In 2005, there were 30 dai pai dongs left in Hong Kong. Wong Kwong Hing (黃光慶), the license holder of Man Yuen Noodles, passed away. The Lee brothers, disciplines of Wong’s father and the operators of Man Yuen for many decades, attempted to continue the hawker license but were rejected by the government. A number of district councillors, legislators, and 3000+ Hong Kongers made a petition, urging the government to let the Lee brothers continue with the business. Their petition failed, and the famous street stall was forced to close down. Yet, the 2005 incident successfully captured the media’s attention and brought out the issue of the dying culture to the public. The conservation effort gained momentum in the next couple of years, and eventually led to the change of license regulations in 2008, allowing non spousal license transfer to be considered. Despite the effort, the numbers of dai pai dongs continue to drop. Without anyone’s notice, the end of dai pai dong could become reality in less than a generation’s time. 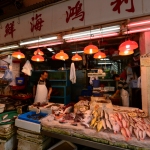