In 1888, the same year when Peak Tram began operating up the slope of Victoria Peak, “Kowloon Ferry Company” was also established for managing the first regular steamboat services between Kowloon Peninsula and Hong Kong Island. Soon, the company expanded to a fleet of four ferries, and was renamed to “Star Ferry Co Ltd” (天星小輪), the name that is still in use today. Named by National Geographic Traveler as one of the “50 Places of a Lifetime” and topping the list of “Top Ten Most Exciting Ferry Rides” by the Society of American Travel Writers, it is no doubt that Hong Kong’s Star Ferry has been on the radar of international travelers for quite some time. For about HK$4 (US$ 0.50), anyone can enjoy a moment of peace crossing Victoria Harbour. In the past century, as a series of land reclamations have shortened the distance between Kowloon Peninsula and Hong Kong Island, piers in Central and Wanchai have been moved numerous times, and ferry rides across the Harbour have become shorter. No matter how short the ride has become, the star ferry experience still offers some of the most rewarding views of Hong Kong’s skyline. To have a moment of relaxation, we always prefer taking the ferry to Tsim Sha Tsui on the Kowloon side when time allows. The ride is particular lovely at sunset and night.

In 1888, Indian Parsee businessman Dorabjee Naorojee Mithaiwala established Kowloon Ferry Company and operated the first regular ferry service between Hong Kong and Kowloon, taking bread, cargo and passengers with his steamboat Morning Star. In 1890, three more boats, Evening Star, Guiding Star and Rising Star joined the service. Upon retirement, Mithaiwala sold his ferries and company to another British-Indian businessman Sir Paul Chater’s (遮打), one of the first business mogul who was responsible and involved in establishing many large corporations in Hong Kong, including Hongkong Land (置地), Hongkong Electric (港燈), Dairy Farm (牛奶公司), Kowloon Wharf (九龍倉), etc. In the 20th century, the fleet of Star Ferry continued to grow as different generations of ferry piers were erected in Central, Wanchai and Tsim Sha Tsui. Today, the Star Ferry has eight boats in total, with an average age of 58 years old. Since the completion of Cross-Harbour Tunnel in 1972 and the Harbour crossing Mass Transit Railway (MTR) in February 1980, Star Ferry is no longer the main means of public transportation between Hong Kong and Kowloon. It does, however, carry a sense of history and collective memory of the bygone era. For both locals and tourists, the ferry also offers arguably the best way to enjoy the skyline of Hong Kong. Taking the MTR or driving through the Cross Harbour Tunnel, one can hardly notice the famous harbour. 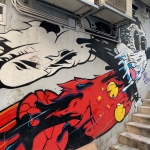 For 50 years, lampposts, electrical boxes, concrete pillars, pavements, benches, planters, and retaining walls on the streets of Hong Kong could be seen as one large canvas for the “King of Kowloon” (九龍皇帝) to leave his unique calligraphy works. Sometimes, he wrote to proclaim his ancestral land ownership of the Kowloon Peninsula before the British rule, while at other times he would write about his family. Seen by many as acts of a crazy man, the “King of Kowloon” or Tsang Tsou Choi (曾灶財) was probably the most well known graffiti artist the city had seen in the 20th century. Fined by the government numerous times, insulted by neighbours, and even disowned by his own family, Tsang Tsou Choi was mocked by Hong Kong for decades. Whenever his calligraphy was washed or painted over by the authorities, he would restore the works right after. His works were largely seen as public nuisance until the 1990’s, when local artists, fashion designers, art directors, interior designers, furniture makers, graphic designers, musicians began to use Tsang’s unique calligraphy on design products. In his final years, Tsang’s works finally began to gain public recognition with successful shows both in Hong Kong and abroad, including the Venice Biennale in 2003, and even went for auctions at the Sotheby’s.

A decade after Tsang’s death (2007), street art in Hong Kong has already entered a new chapter. Far from the vibrancy and sophistication of London’s or New York’s, street art is nonetheless much widely accepted and welcomed by the public in Hong Kong nowadays. In recent years, the city has been frequented by international street artists, such as Invader from France, who has secretly put up his iconic pixelated 8-bit video game images all over the city. In December 2019, the popular show “Banksy: Genius or Vandal?” arrived in Hong Kong and created quite a stir on the social media. The free spirit, unique artistic expression, cool character, coupled with satirical imagery, political controversy, and social criticism of street art have been welcomed by the young generations, especially in the era of social media when everybody has something to say and share.

In Hong Kong, one of the most popular areas to see interesting street art is Central-Sheung Wan (中上環). Thanks to HKwalls, the non-profit organization who has been organizing annual street art festival since 2014, several neighbourhoods in Hong Kong have already become hotspots showcasing the talents of local and international artists. In their debut year of 2014, HKwalls paired artists with properties owners in Sheung Wan and successfully added 17 street murals in the neighborhood, then another 50+ works in Sheung Wan and Stanley Market in the following year. The event moved to Sham Shui Po in 2016, Wong Chuk Hang in 2017, then returned to Central and Western District in 2018 before moving on to Wanchai (2019) and Sai Kung (2021). HKwalls has successfully brought in great artistic talents from all over the world to Hong Kong, transformed the urban scenery of old neighborhoods, and raised public appreciation of street art to a whole new level.

For a city well known of its quick, dramatic and relentless urban changes, the impermanent and transient beauty of street art suit perfectly to echo the ephemeral spirit of Hong Kong. Here if you see an interesting street art, you better document it right away. Next time around, the mural may be gone forever.