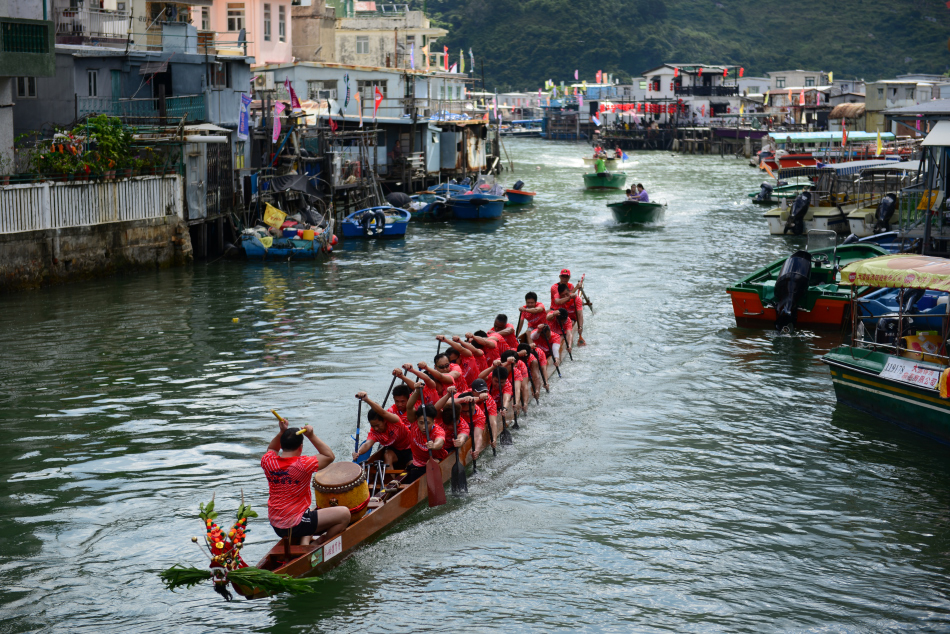 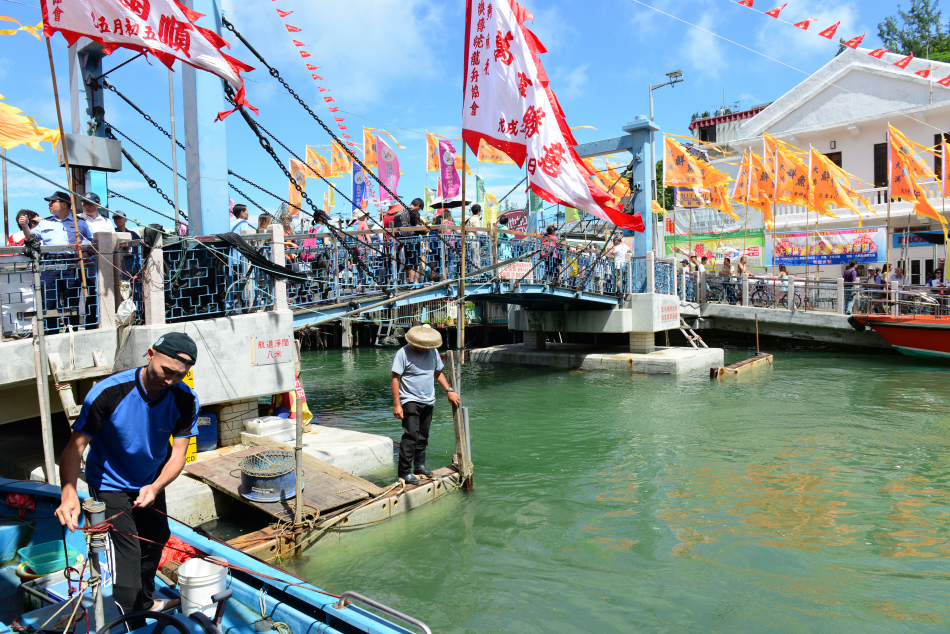 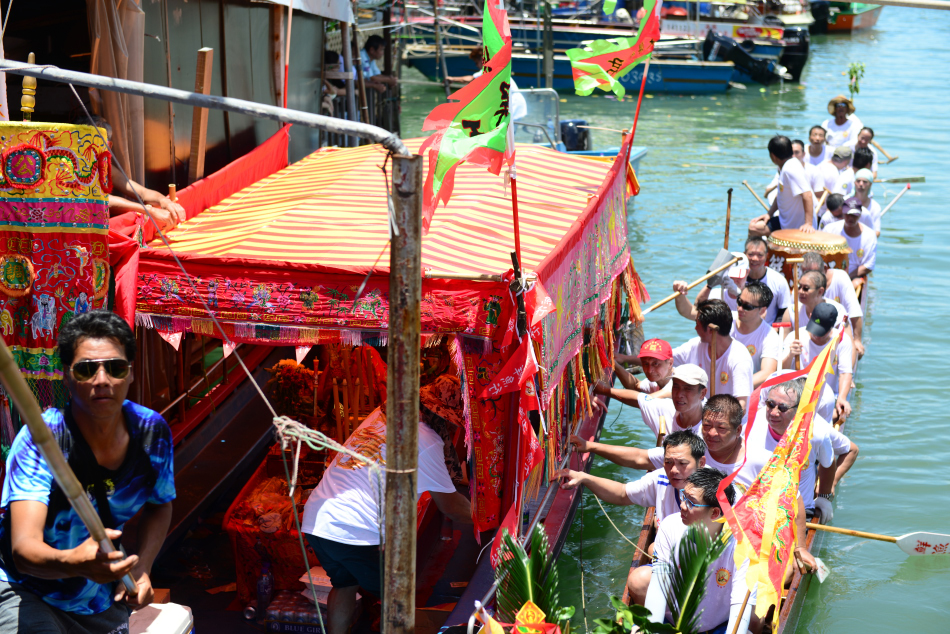 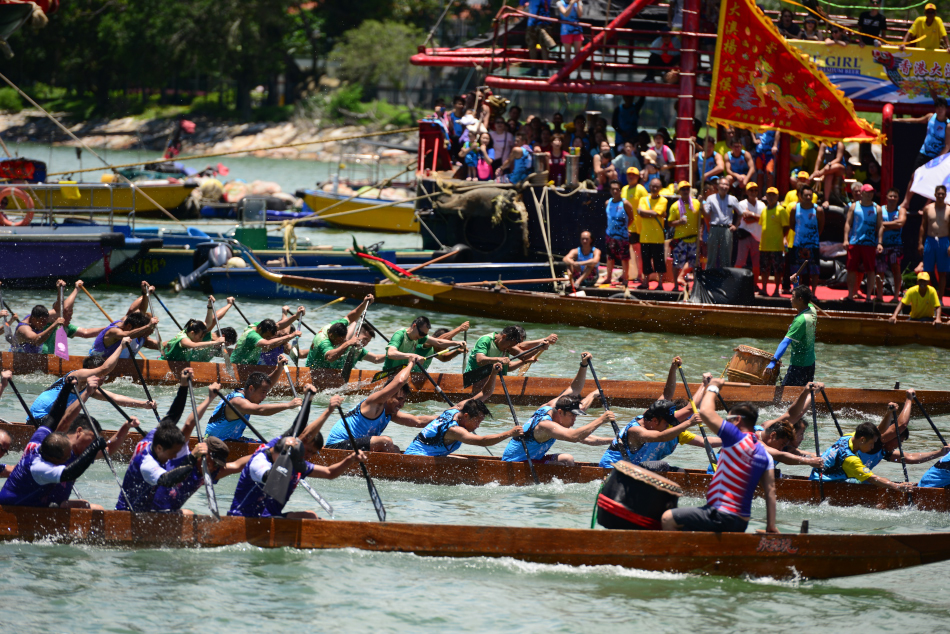 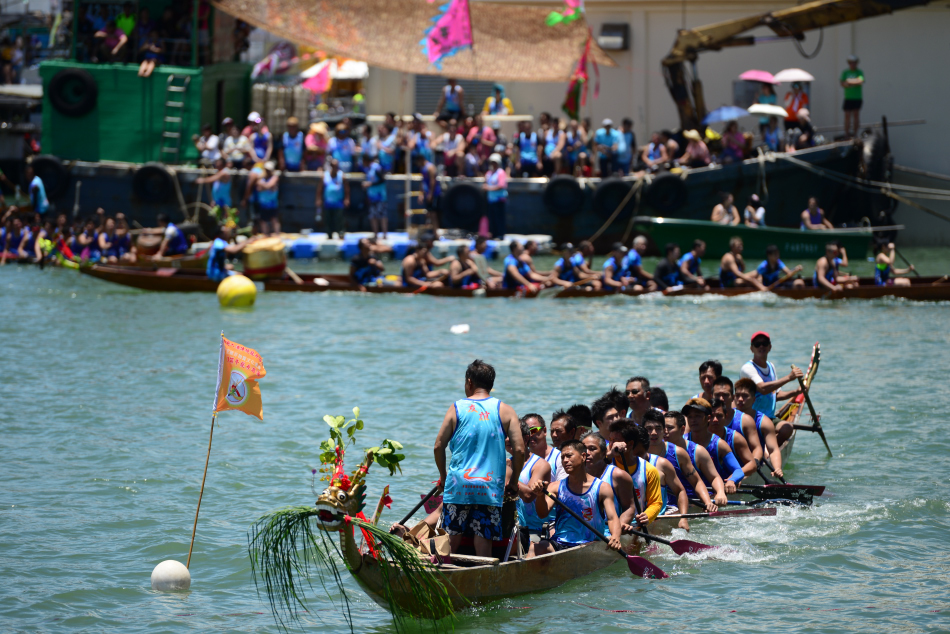 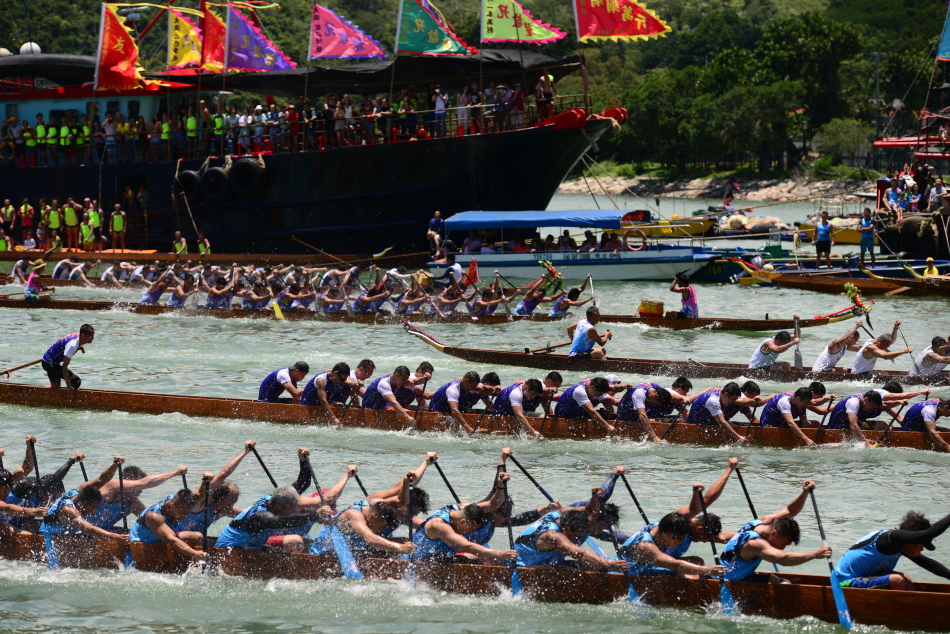 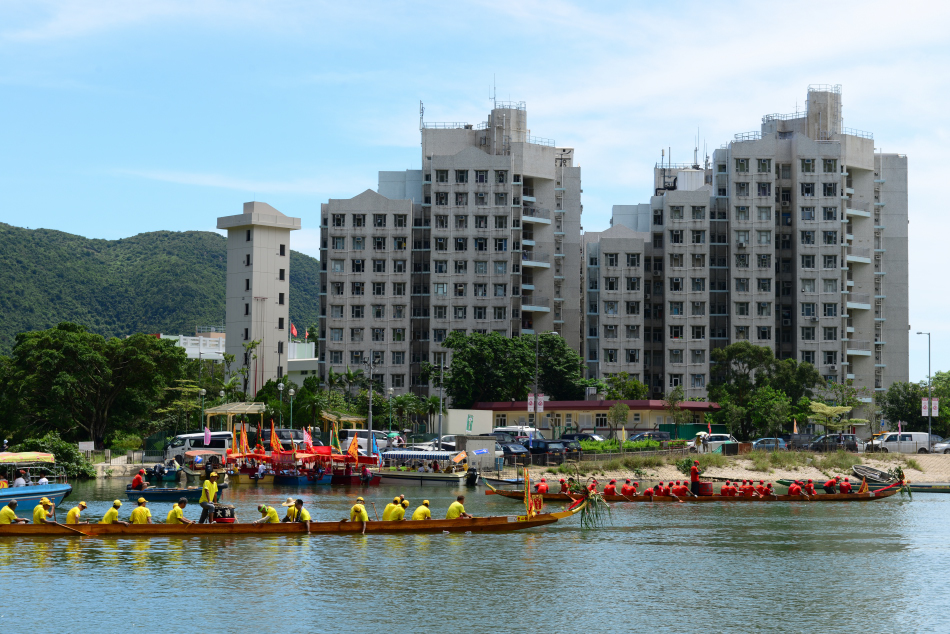 The trail from Fan Lau to Yi O was less well maintained than the path we walked in the morning.  It took us about 40 minutes to walk from Fan Lau Sai Wan (分流西灣) to the farming village of Yi O (二澳).  This was our second visit of Yi O.  A little over two years ago, we came to Yi O and found a beautiful valley where a few farmers trying hard to reintroduce rice farming back to Lantau Island.  Yi O, a farming village with over two hundred years of history and over a thousand villagers in its heyday, became an abandoned village in the 1970s when the last of its inhabitants moved out to the city.  In 2013, a farming cooperative secured a 30-year lease after negotiations with the original four clans of villagers to re-cultivate the land of Yi-O for organic rice paddies.  Since then more lands were cultivated and more helpers were hired each year.  Over 10% of Yi-O’s land had been worked on to develop the farm-to-table business.  In the past, growing rice in a constantly lightly flooded plot in front of village homes was a self-sustainable way of living for Yi-O inhabitants.  Nowadays, the cooperative tried to revive this method, but were still experimenting with more efficient ways to yield more crops.  Under the late afternoon sun, the golden rice paddies revealed a lovely rural dream.  In the era of enormous concerns regarding food safety, the farming experiment of Yi-O might prove crucial for Hong Kong to reduce some degree of reliance on food imports. 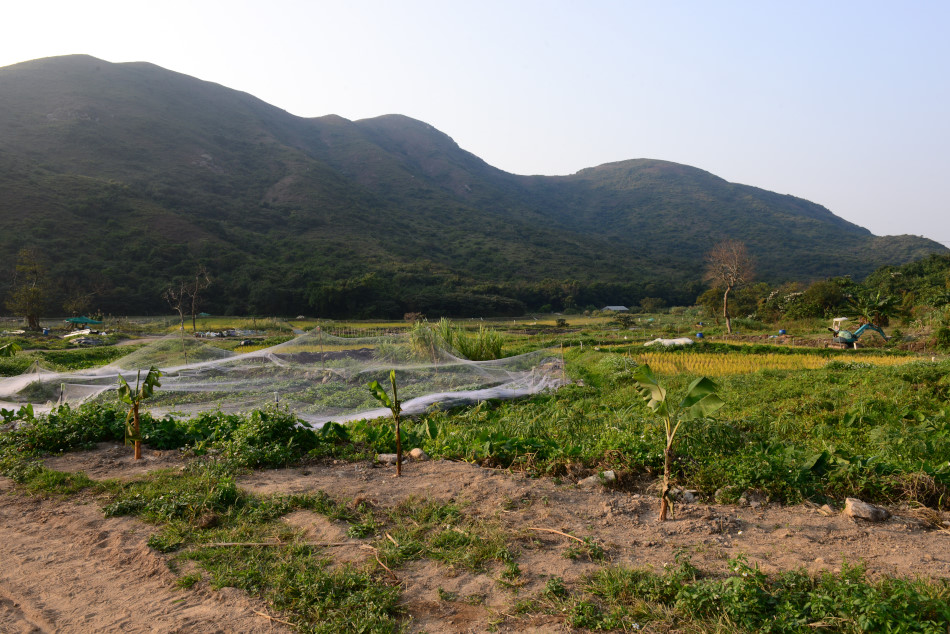 Yi O lies in the embrace of lush-green mountains from both sides.

The golden rice paddies looked promising.  Perhaps it was almost harvest time for these fields.  Because of its small output, it isn’t easy to buy a bag of rice from Yi O.  The farming cooperative has a small shop in Tai O to promote their products.

We found our way to the main path in the middle of Yi O, and continued to walk north towards Yi O Bay. 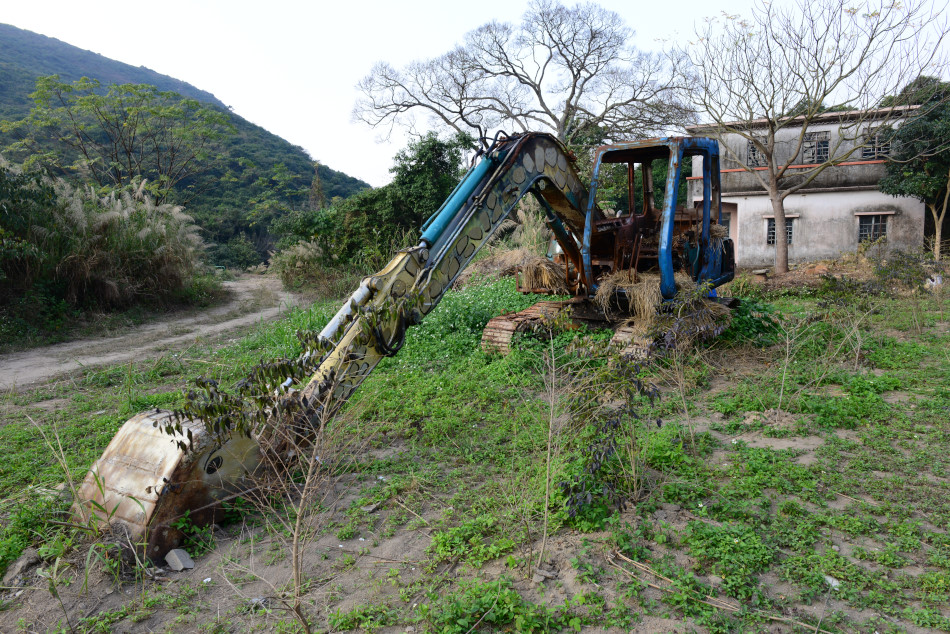 Winding through the village of Yi O, we could still encounter a number of abandoned homes and construction equipment.

The sun was low and so as the tide when we reached Yi O Bay.  The tidal flat is the ideal place for mangrove trees to thrive. 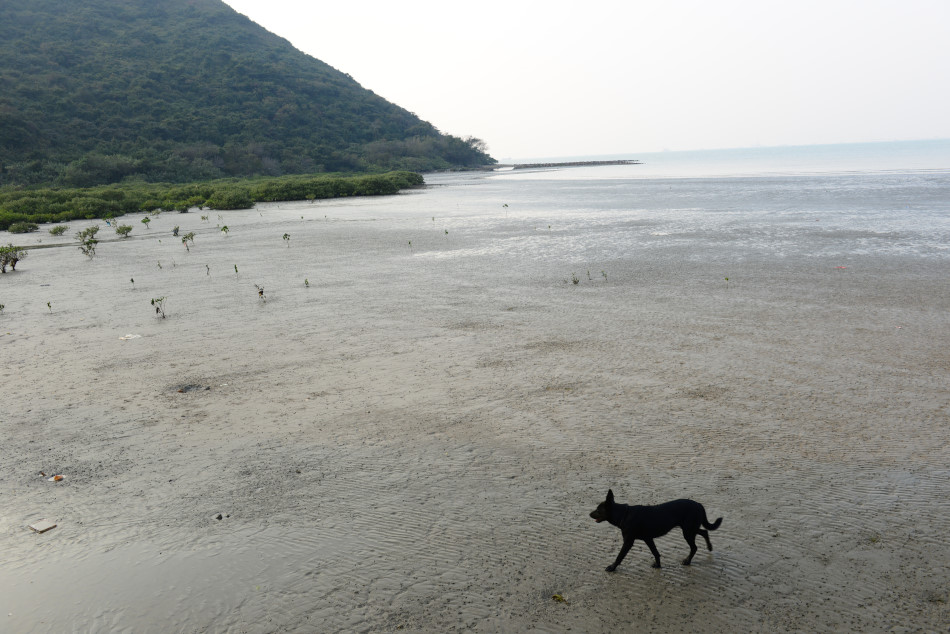 As we left Yi O Bay and headed towards Tai O, a few dogs came the opposite direction towards Yi O.  One by one the dogs walked across the mudflat and disappear into the village of Yi O.

Reflection of the western sun and distant mountains and the incoming tidal water on the mudflat of Yi O Bay was quite picturesque. 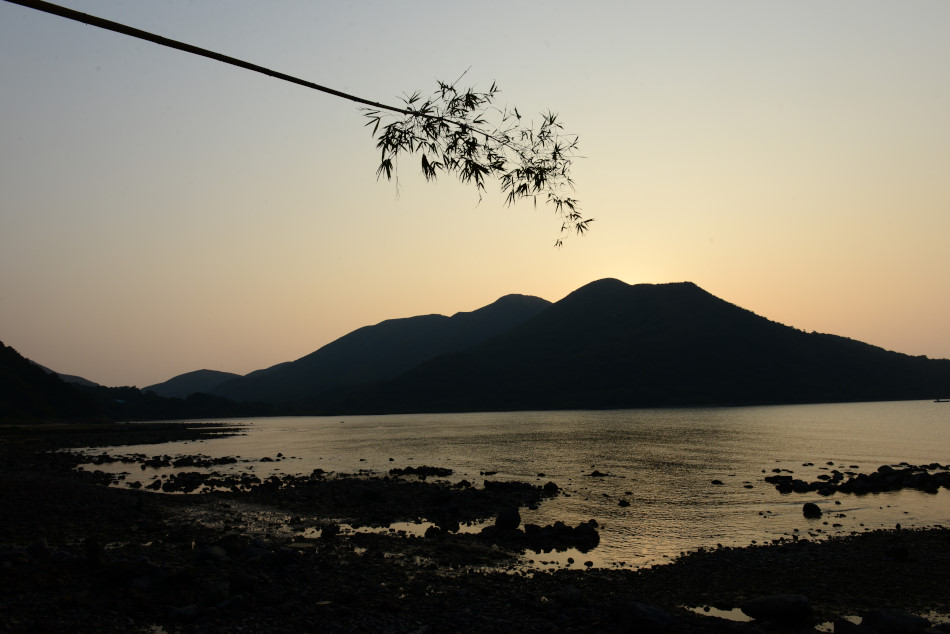 The sun was fading fast behind the silhouette of mountains adjacent to Yi O.

The flag of Yi O flew high at a nearby concrete pier. 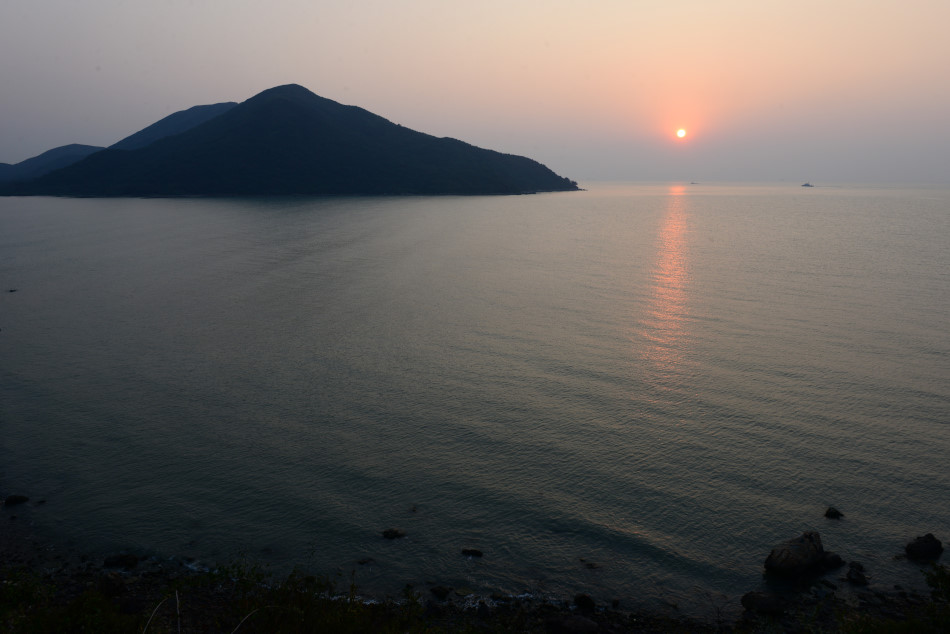 Despite the hazy weather, the sunset over Pearl River Estuary was quite spectacular.

About an hour after we left Yi O, we arrived at the small village of Fan Kwai Tong (番鬼塘), across the bay from Tai O.

We walked across the Tai O Promenade from Fan Kwai Tong (番鬼塘) to Tai O (大澳).  The tide was coming in as the last twilight faded.

In early evening, the popular Tai O wasn’t as busy as we thought.  Without the tourist groups, it was our first time to experience the charm of Tai O as a tranquil fishing village but not a busy tourist trap with vendors trying to sell you all kinds of souvenirs and snacks.

Without the tourists, we could leisurely admire the beauty of the fishing community.  After a long day of hike, we decided to have dinner in Tai O before returning to the city centre.

As we entered Tai O, vendors selling dried seafood to tourists were about to close their stalls. 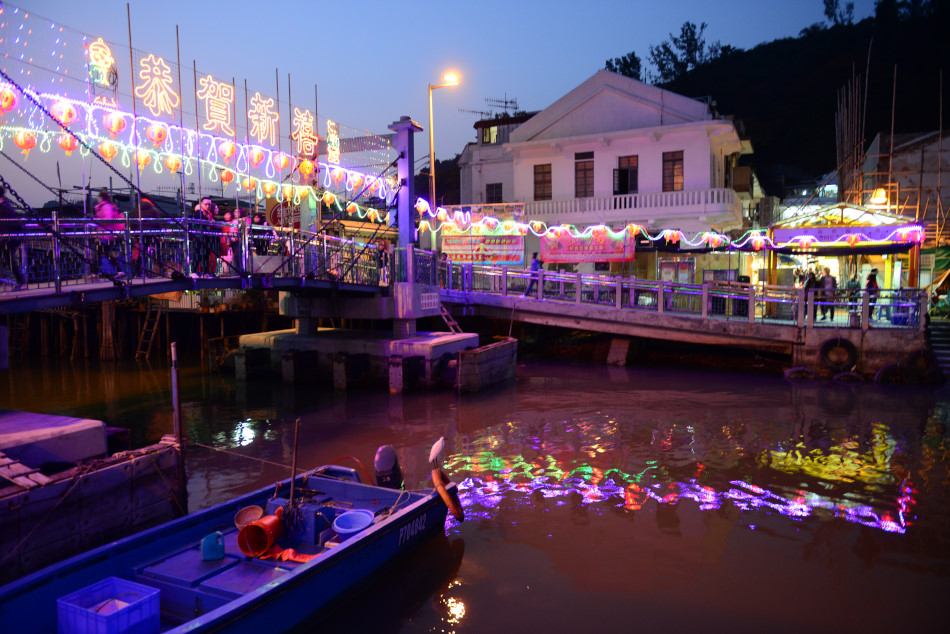 We soon reached the iconic suspended bridge of Tai O.  The festive lights from the Chinese New Year were still up.

We crossed the suspended bridge to enter the main part of the fishing village.

Without the noise from tourists, Tai O was quite peaceful.  Many inhabitants were preparing dinner in their stilt houses.

We passed by an interesting shrine dedicated to the deity of the local land.

Tai O Community Centre is the main venue for cultural activities at the fishing village. 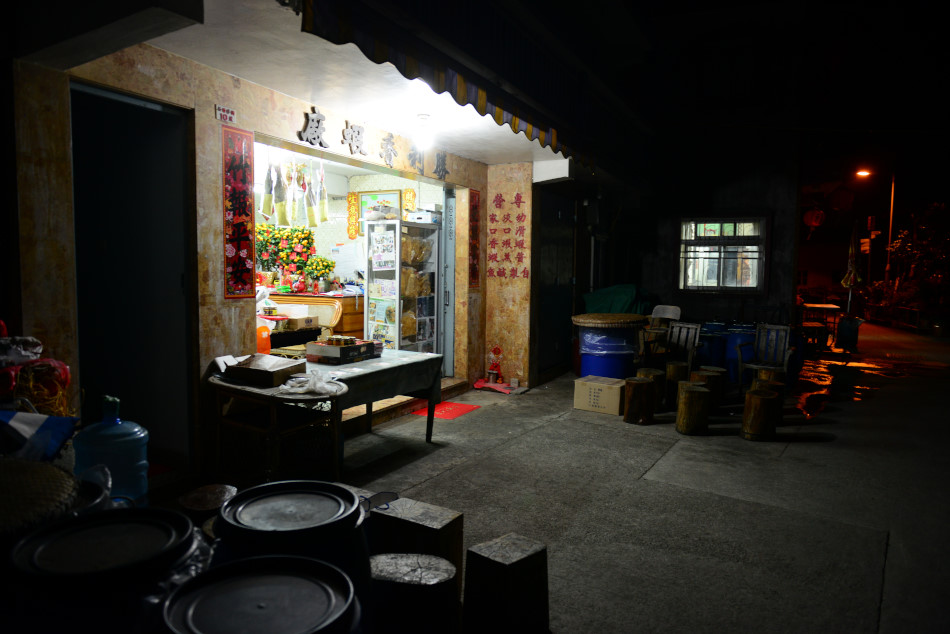 We passed by a number of shrimp paste shops and manufacturers, an industry that Tai O has been famous for many generations.  Many of the shops were already closed for the day. 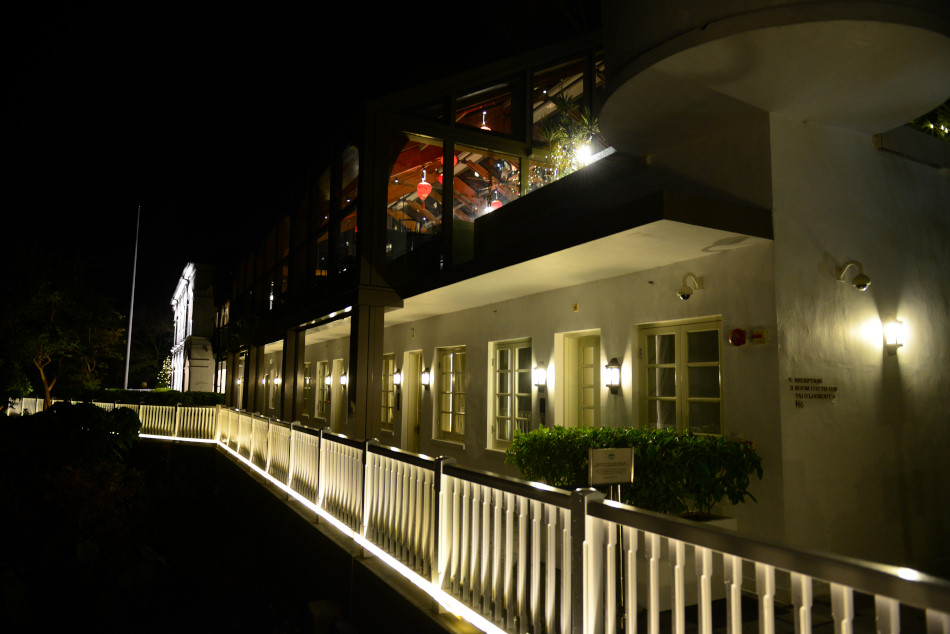 After wandering through Tai O, we ended up at Tai O Heritage Hotel.  The hotel was established in 2009, after extensive renovations were carried out for the historical police station built in 1902.  We dined at the glass roofed restaurant Tai O Lookout in the hotel.  The food was nothing spectacular but the historical setting of the complex and the airy atmosphere of the glassy building offered us a pleasant experience to finish the day. 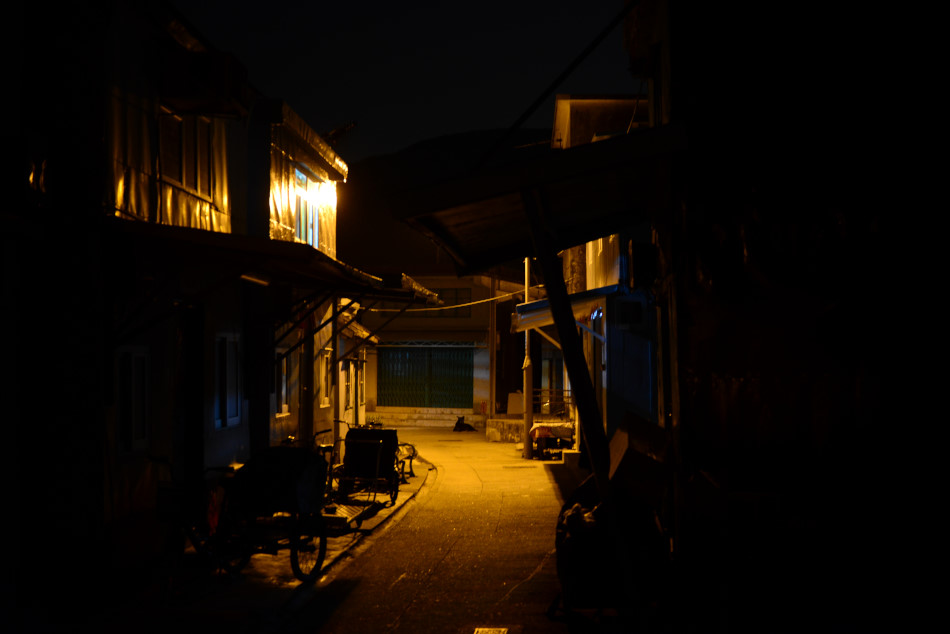 After dinner, we strolled through the village once again heading for the bus station at the village entrance. 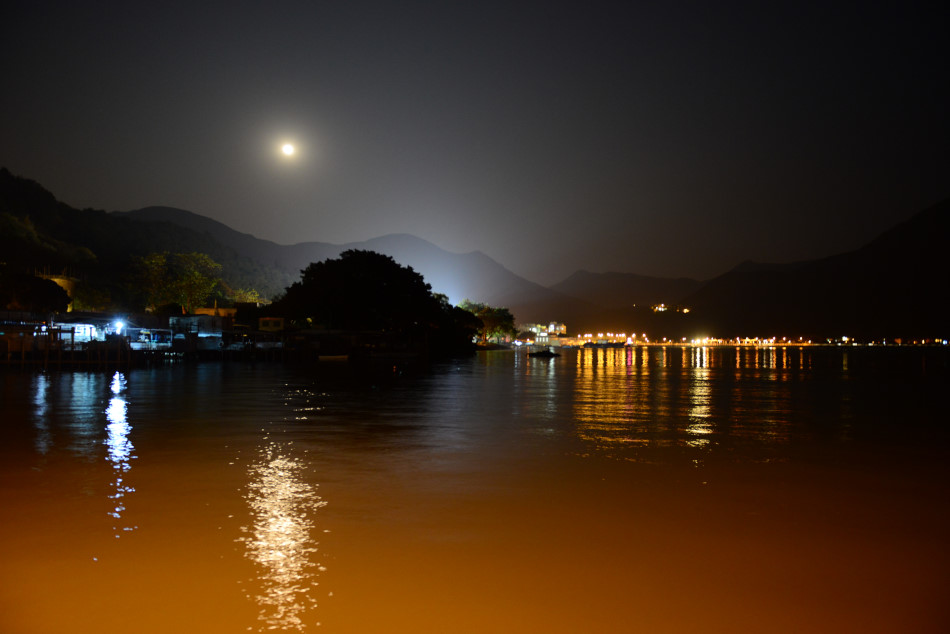 The tide was much higher than an hour or two ago, and so as the moon. 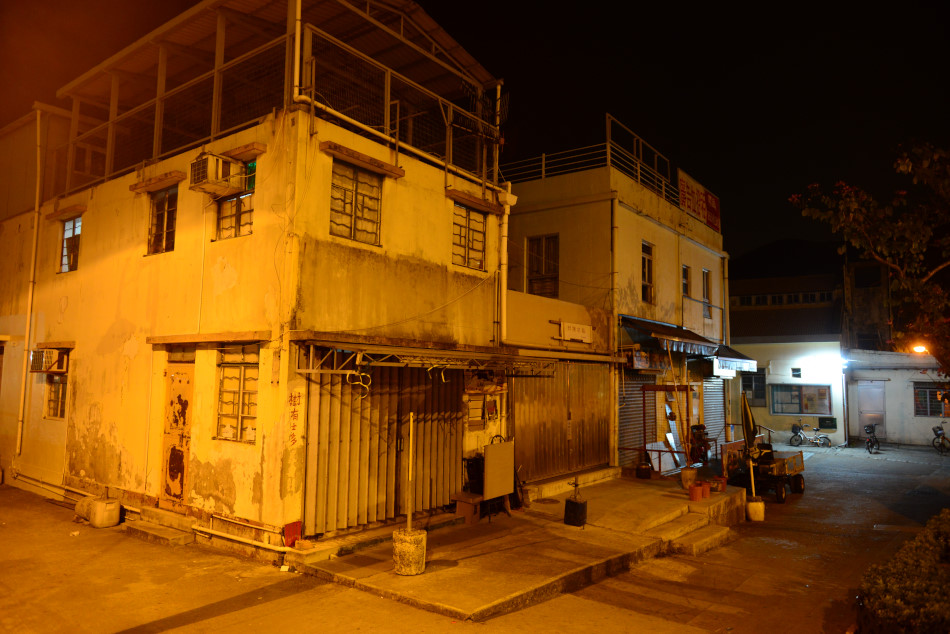 All the stores near the bus station were closed.  We waited for about ten minutes before boarding a Lantau bus for Tung Chung at North Lantau, where we would switch to the MTR, Hong Kong’s super efficient metro system, to return home.