One thing truly amazing about Hong Kong is the proximity of untouched nature from its bustling commercial downtown and the ease of access by means of public transportation.  At the northeast of Hong Kong, the lush green hills, turquoise water and sandy beaches of Sai Kung is popular for hikers, beachgoers, bikers, kayakers, and all kinds of nature lovers.  The tallest of the three steepest peaks in Sai Kung, Sharp Peak (蚺蛇尖, literally translates to Python Snake Peak in Chinese) is often considered the Holy Grail for hikers in Hong Kong.  At 468m, Sharp Peak is not the highest peak in the city, but its steep slopes, prominent existence in the area, and the fantastic views of East Sai Kung’s subtropical coastline from the peak makes it a unique hiking destination.  During weekends, the area can get a little crowded, including the trail that heads up the Sharp Peak.  Though the scenic views from the peak and the reward of chilling out on the pristine beaches below make all the efforts of scrambling up the steep rocky slope of Sharp Peak among groups after groups of fellow hikers more than worthwhile.

Bus 94 from Sai Kung City to Wong Shek Pier dropped us off at the trailhead at Pak Tam Au (北潭凹).

After about an hour on the MacLehose Trail, we passed by the tranquil village of Chek Keng (赤徑) and deviated from the main trail at Tai Long Au (大浪坳), we reached the small trail heading towards Nam She Au (蚺蛇坳), where the ascend of the Sharp Peak officially began.  A few signs were erected between Tai Long Au and Nam She Au to warn against anyone who wished to reach the summit of Sharp Peak due to the treacherous conditions of the mountain trail.

Along the way we could see traces of rain erosion due to recent downpours.

Soon we were on our way walking up the first steep section of the ascend. 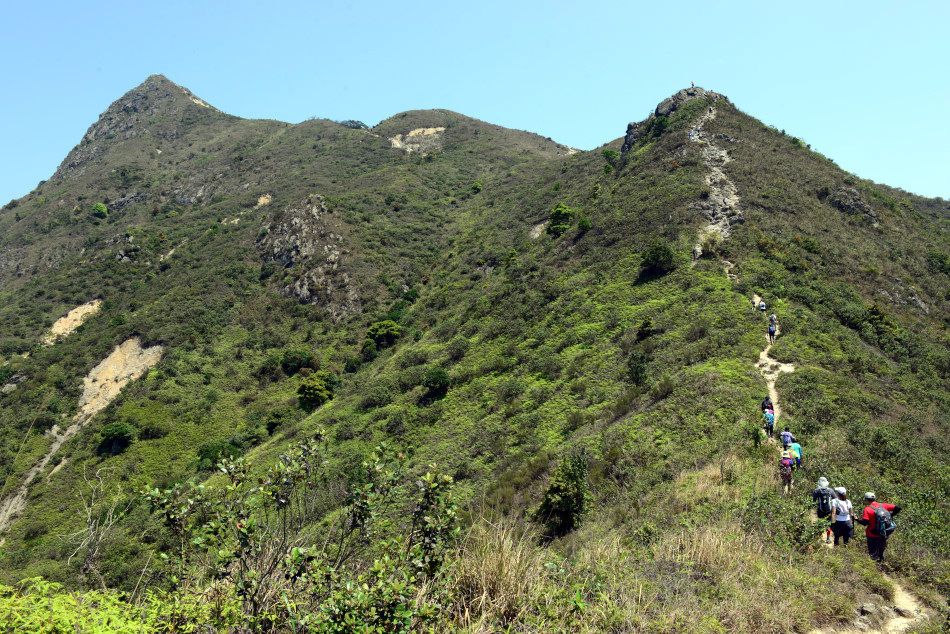 The trail was exposed with hardly any shade.  Despite its difficulty and relatively remoteness, the trail up the Sharp Peak was far from peaceful because of the crowds. 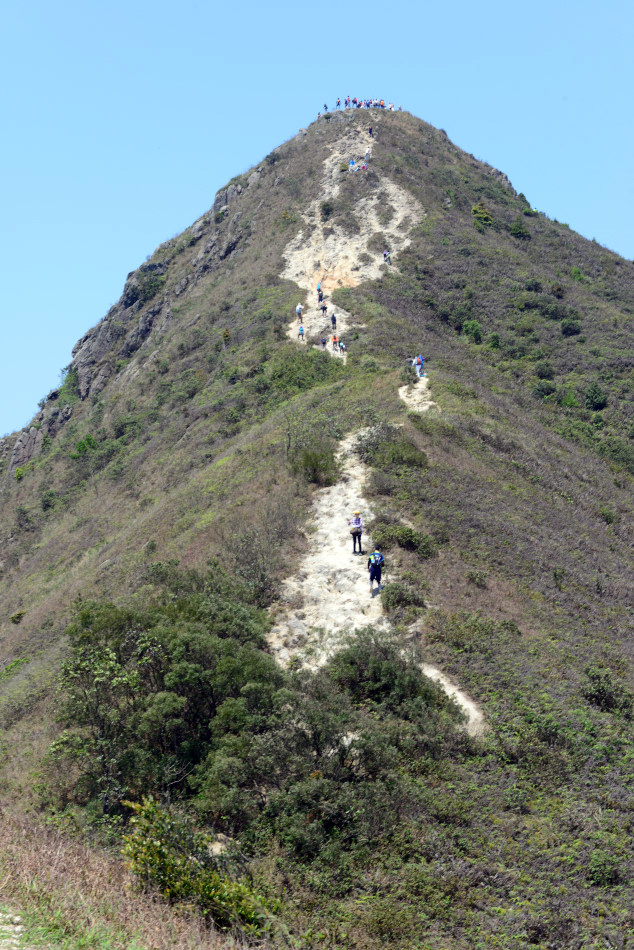 It was exciting to see that the summit was get closer.

Looking back down the route we came up, views of the beaches of Tai Long Wan (大浪灣) were quite amazing despite the haze.

There were several sections of the trail that we needed to scramble up the slope using our hands.

After about two and a half hours from the trailhead, we finally reached the summit of the Sharp Peak.  The small summit area was filled with hikers of all sort. 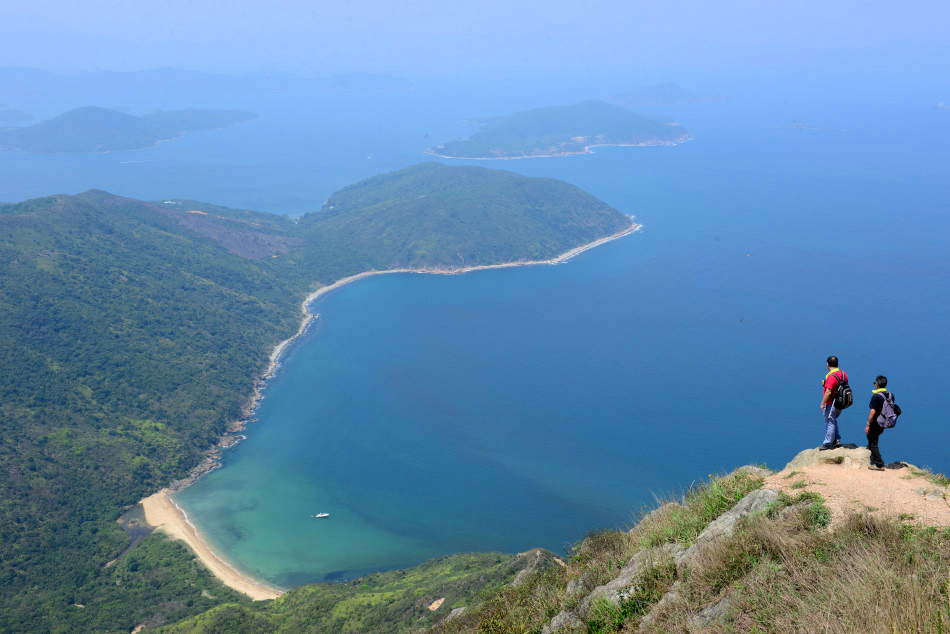 From the summit of Sharp Peak, the view of Nam She Wan beach (蚺蛇灣) below, and the Peninsula of Ko Lau Wan Tsui (高流灣咀) and Grass Island (塔門) beyond was incredible despite the haze.

Some hikers prefer to climb the north ridge of Sharp Peak from She Wan beach (蚺蛇灣).  The north ridge is well known for its steepness, especially the last part of the trail where grabbing onto the metal ribbon was essential.

The descend down towards Mei Fan Ten (米粉頂) is not a walk in the park either, especially when one is already tired from the ascend.

The route of Mei Fan Ten (米粉頂) was slippery at parts due to loose gravel.

The summit of Sharp Peak already appeared like distant memory. 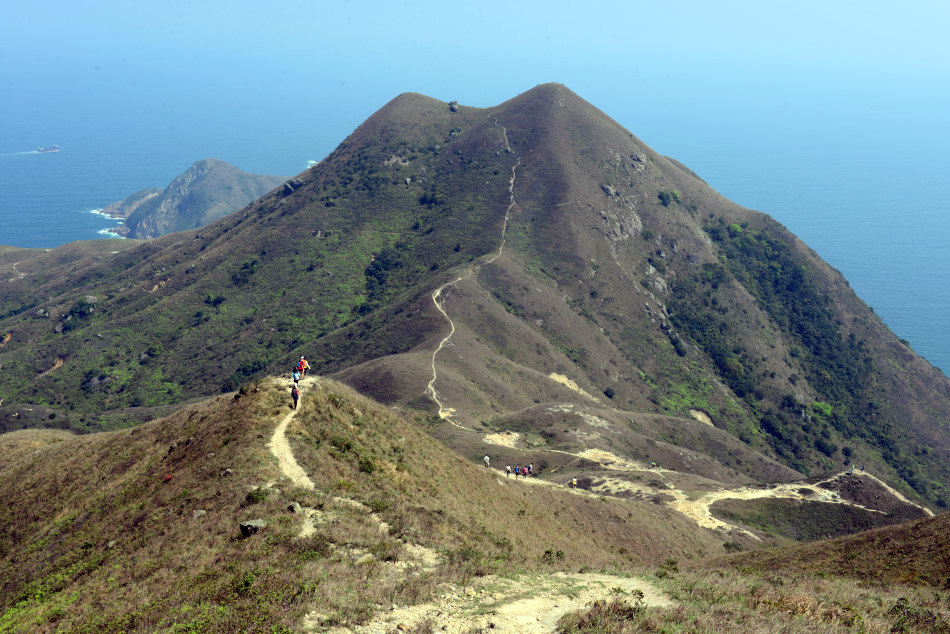 Ahead of us was Tung Wan Shan (東灣山),  a saddle shape hill overlooking Tung Wan.

After about an hour of descend we were approaching the pristine beach of Tung Wan. 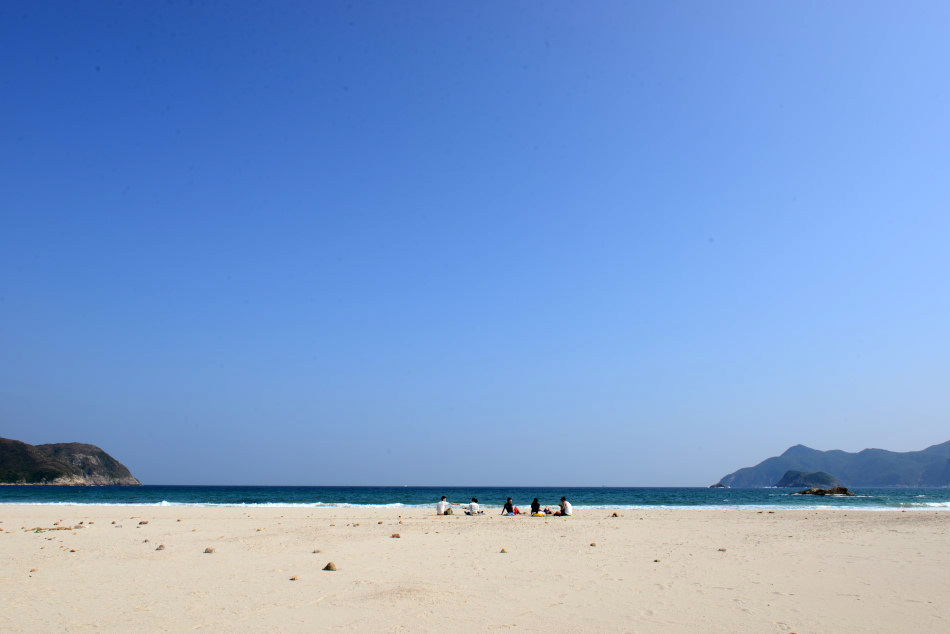 Due to its remoteness, there are no lifeguards and shower facilities at Tung Wan.

There were hardly anyone on the beach too except hikers.

Swimmers who make the effort to Tung Wan (by hiking or private yacht) may enjoy the beautiful water of South China Sea without the crowds commonly found in other beaches in Hong Kong. 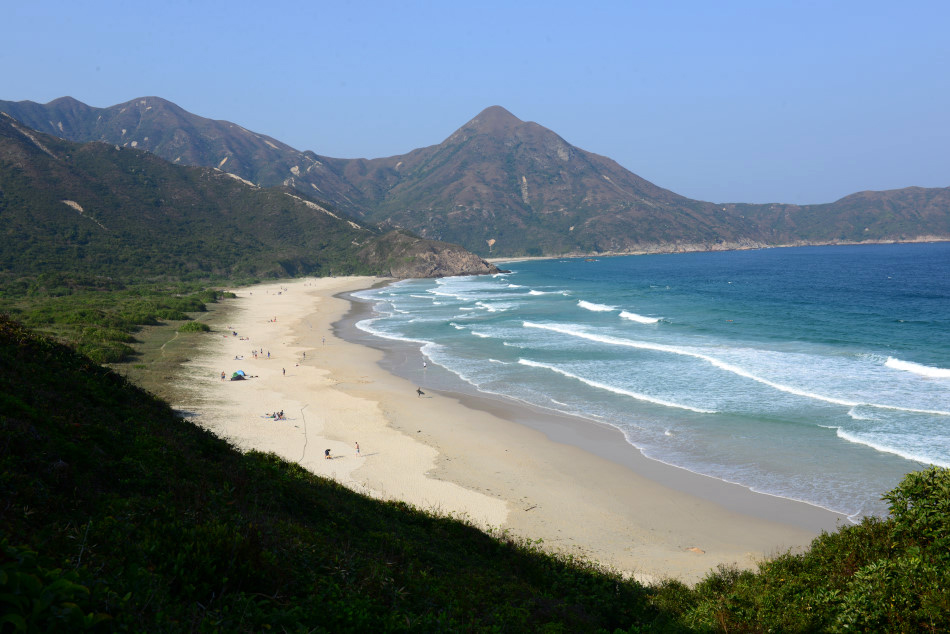 The second beach Tai Wan (大灣) is the biggest of the four beaches. 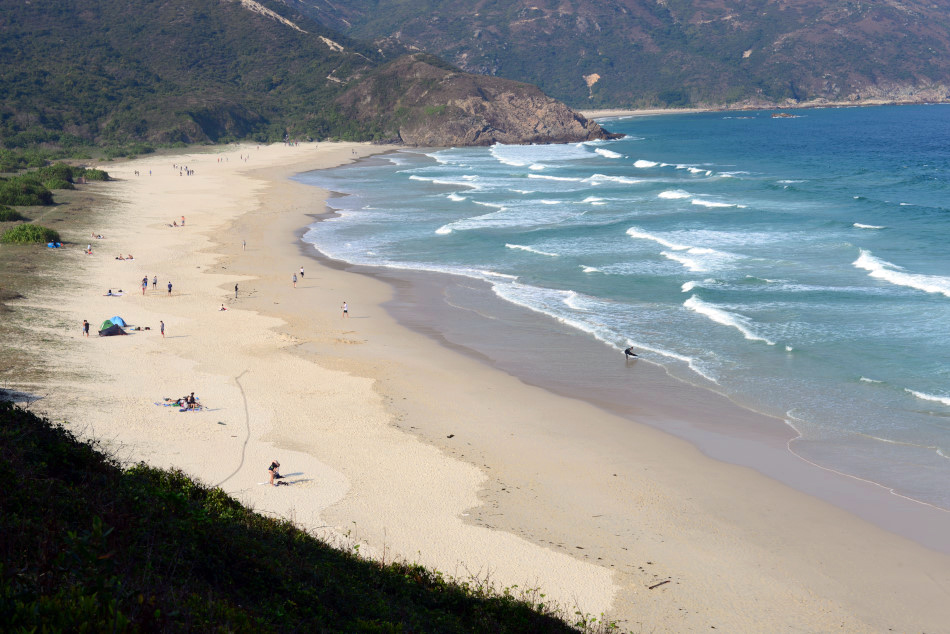 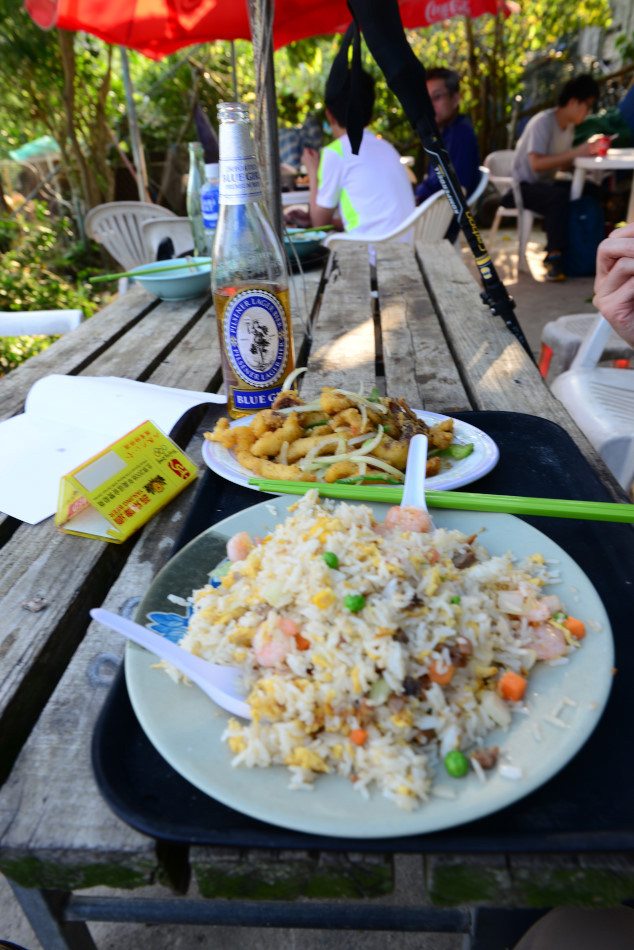 At Ham Tin Wan (鹹田灣), we finally had a chance to sit down at a beach eatery and washed down a plate of fried rice with beer.

Lying lazily on the sand of Ham Tin Wan (鹹田灣) and looking back at the majestic Sharp Peak, it was hard to imagine that we were standing on the summit just a few hours prior. 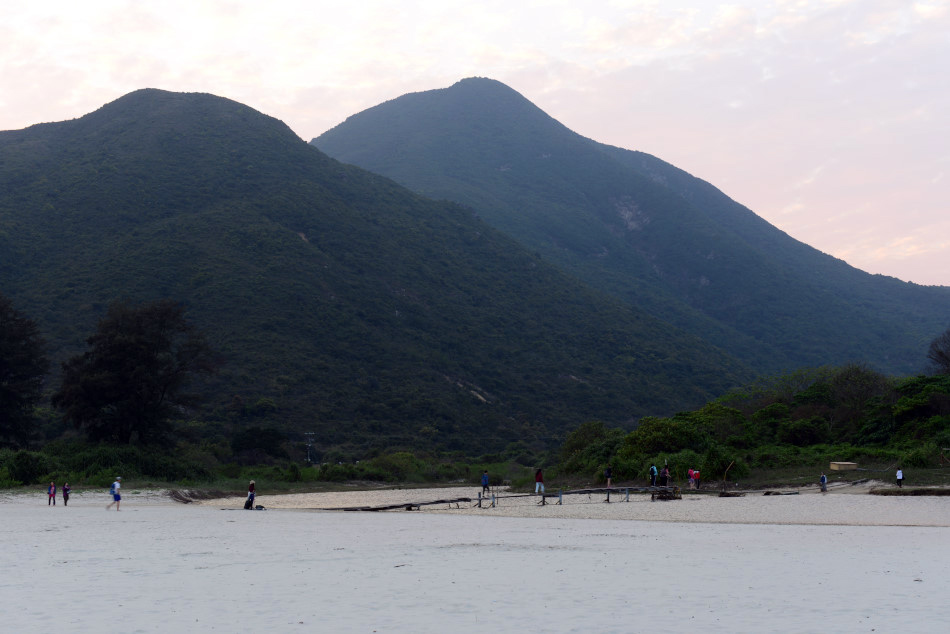 Ham Tin Wan (鹹田灣) is the beach in Sai Kung that we visit the most.  The beach is accessed via a narrow wooden bridge. 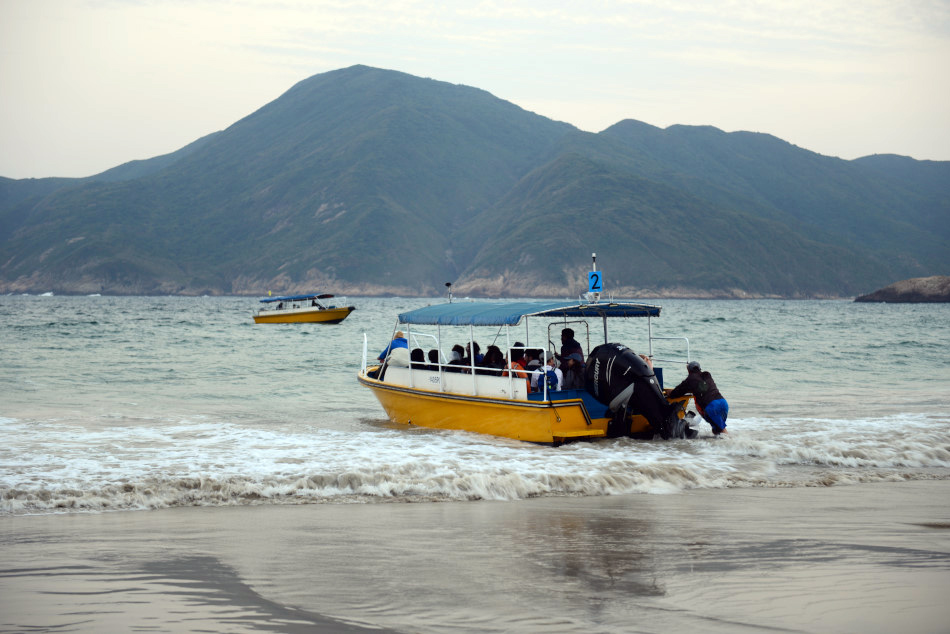 In the evening, we were too lazy to walk another hour over to Sai Wan for the village bus.  We decided to jump onto a motor boat for an exciting but bumpy 45-minutes journey back to Sai Kung city.

Hong Kong has over 200 outlying islands, and only a handful are inhabited.  North of Sai Kung Peninsula (西貢), at the intersection of Mirs Bay (大鵬灣) and Long Harbour (大灘海), the small Grass Island or Tap Mun (塔門) lies across the South Channel from Ko Lau Wan (高流灣) Village in northeast Sai Kung.  At its peak, about 2000 inhabitants lived on the Grass Island.  They were mainly farmers or fishermen.  Today, only about 100 residents stay on the Grass Island, mainly as shopper or restaurant keepers to serve the influx of tourists during weekends and holiday, when the island would turn into a large camp ground for leisure seekers from all around the city.  Simple seafood eateries, a ferry pier, a Tin Hau Temple, an abandoned school, unique rock formations, old village homes, and a few stores catered for weekend tourists, Grass Island is a getaway destination for anyone who is willing to venture this far out from the city.

From Wong Shek Pier in Sai Kung, we took a local ferry out to the Long Harbour (赤徑海) heading towards Grass Island.

Other than a newer cluster of buildings built in 1964 with a charity aid from New Zealand, most village homes on the Grass Island are located near the pier.

Near the pier, we stopped by a simple eatery for lunch.  The local squid is really fresh and delicious. 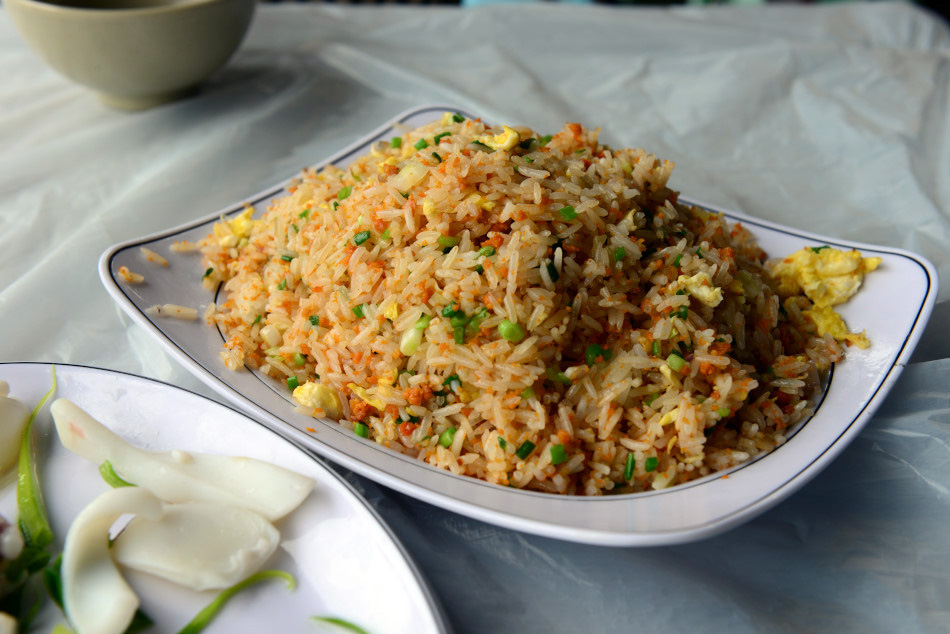 Sea urchin fried rice is a popular dish in many fishing villages in Hong Kong. 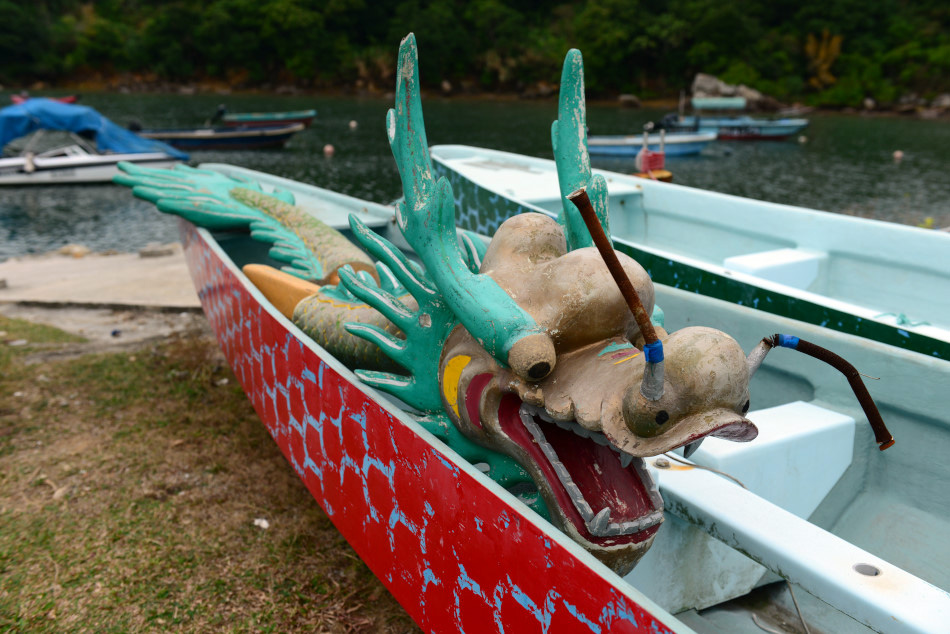 A few dragon boats were lying around a small waterfront area. 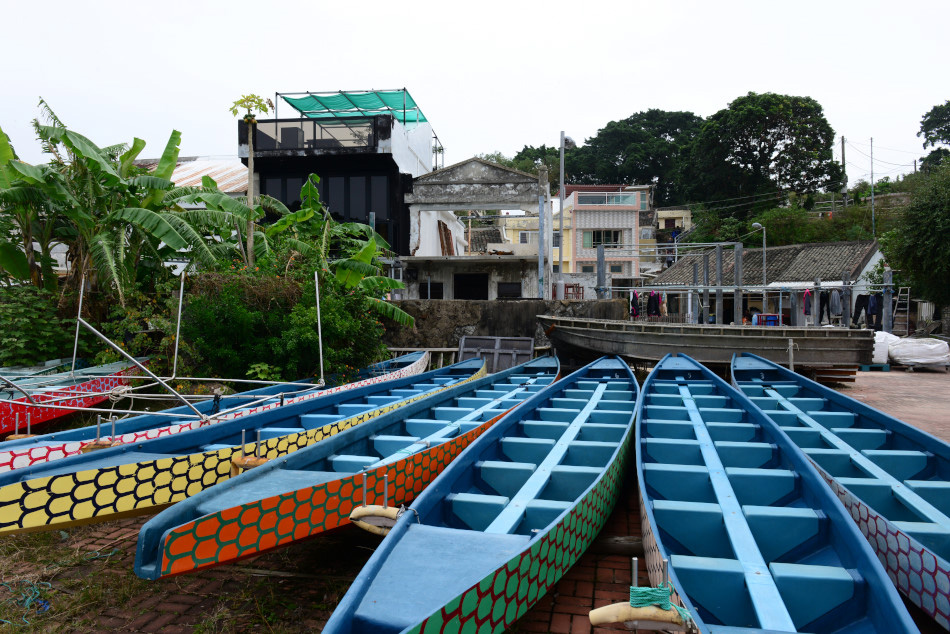 During Tuen Ng Festival, there would be a dragon boat race at the Grass Island. 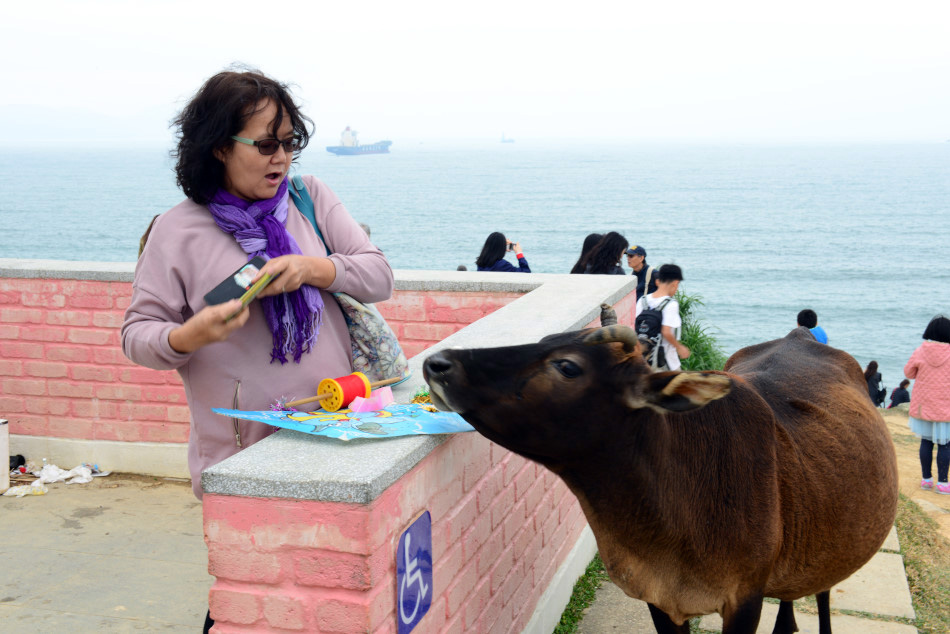 A small trail off the main street of the Grass Island led us to a popular open area above the eastern shore of the island.  The space is crowded with camping tents, kite-playing visitors and feral cattle.

The sloped open lawn seemed had endured heavy foot traffic throughout the years.  The silhouette of the iconic Sharp Peak on the Sai Kung mainland provided the best backdrop for Grass Island.  In a clear day, the water should have been blue and Sharp Peak lush green. 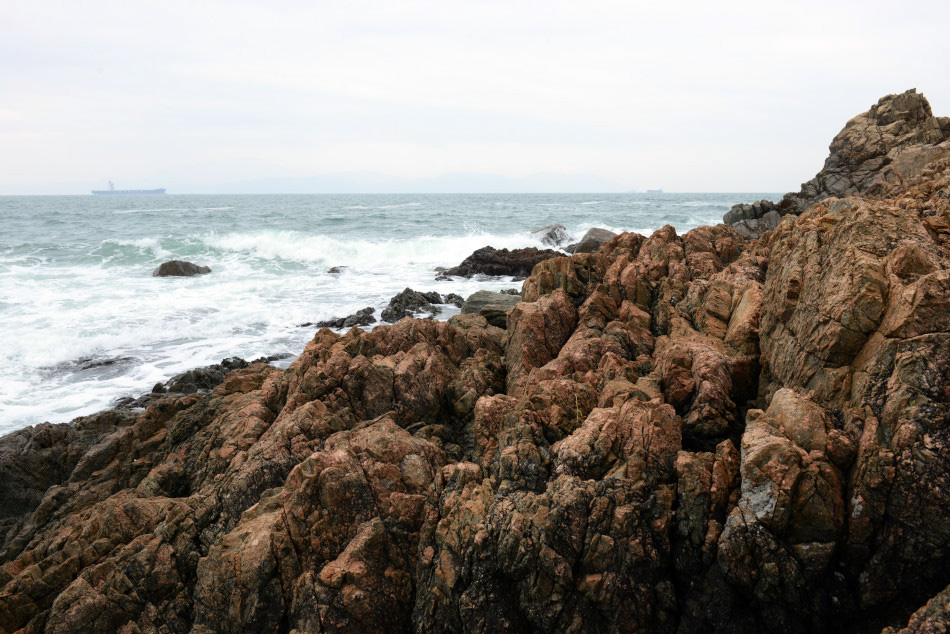 From the hilltop overlooking the open lawn, we followed a off the beaten trail that winded through dense woods for half an hour and eventually arrived at the rocky beach of Che Wan (車灣).  This was probably the most difficult hike on the island.  Our aim was to seek for a seaside rock called the Dragon’s Neck (龍頸筋). 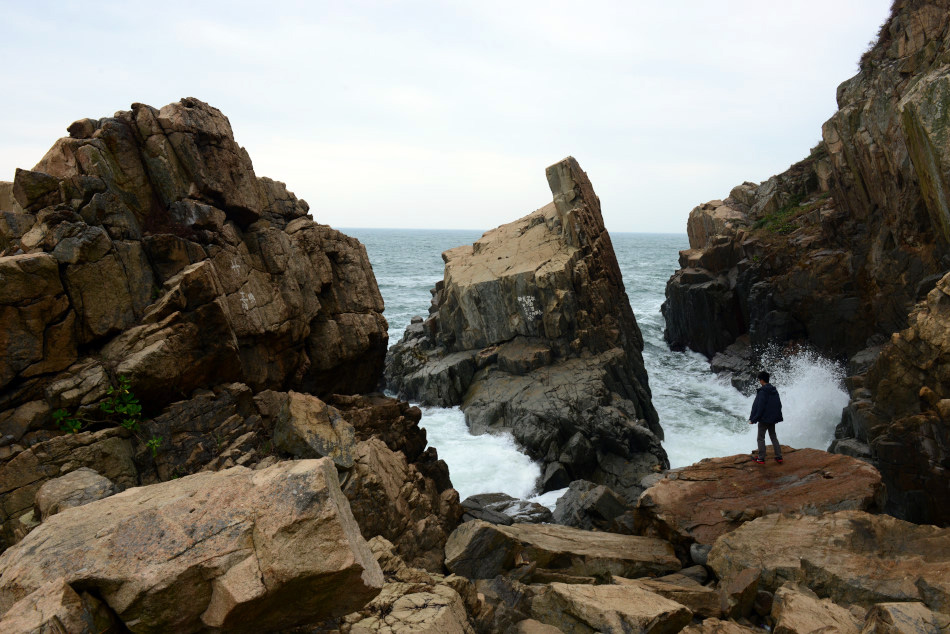 The Dragon’s Neck (龍頸筋) is one of Grass Island most famous natural feature.  It is frequented by hikers as well as visitors who come for fishing.

Back to the top of the lawn, we followed another footpath down the east coast of the island.  Along the path, some visitors set up tents and picnic areas, some went for fishing at the rock beaches, some braved the cliffs for rock climbing, some continued to fly their kites on the windy slopes.  The Grass Island is truly a small leisure paradise for all. 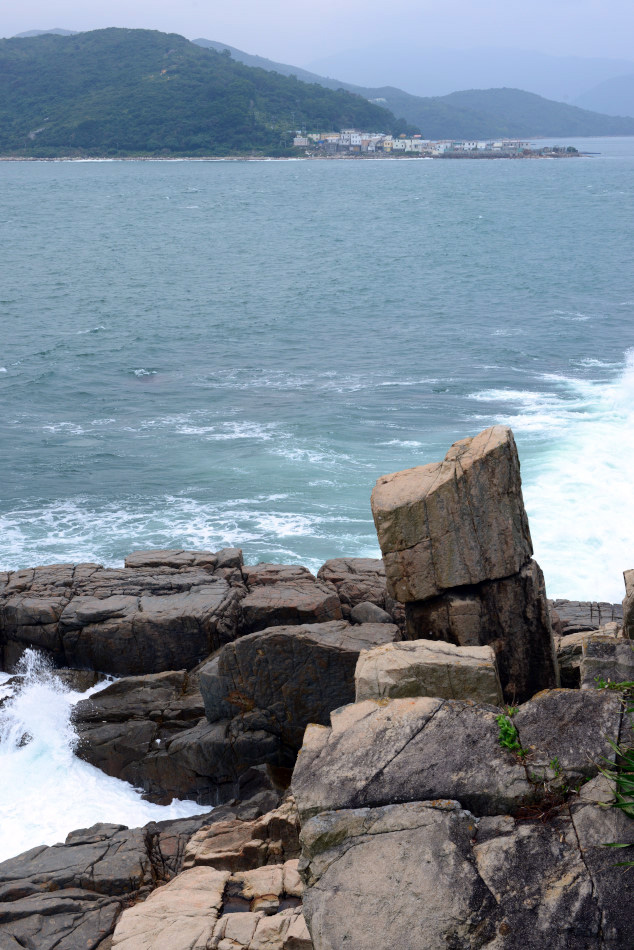 Another well known rock feature was the Lui’s Stacking Rocks (呂字疊石).  Two similar stone cubes, one sitting on top of the other, resemble the Chinese character of the surname “Lui”.

Looking at the Lui’s Stacking Rocks (呂字疊石) from afar, it was hard to imagine how the stacking rocks were formed in the first place.

The entire day was cool and grey while we were on the Grass Island.  The wind was a little strong, and so as the waves. 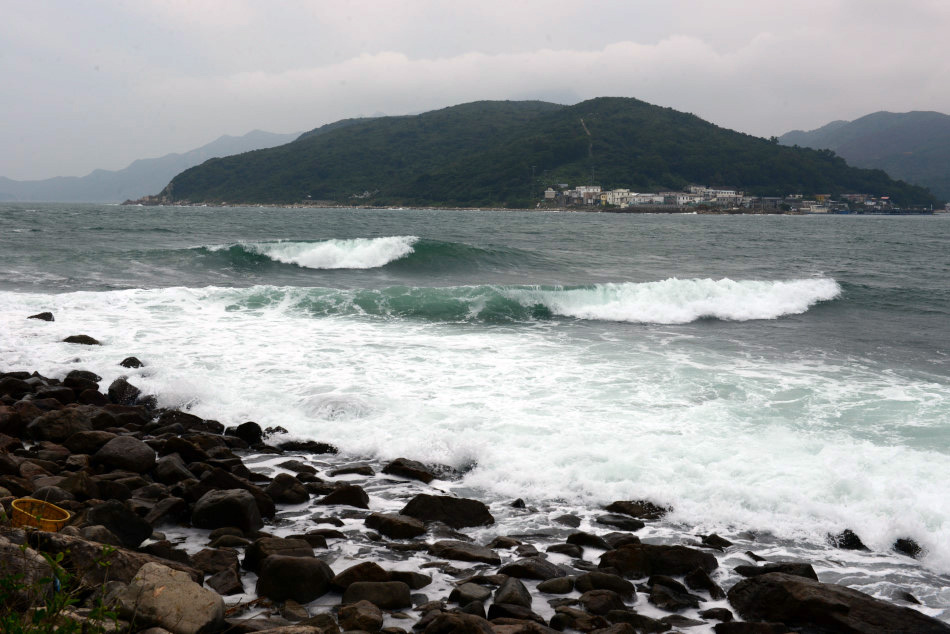 Ko Lau Wan(高流灣) at Sai Kung Peninsula seemed pretty close from the southern tip of the Grass Island.  The sea was a little rough in between, in the 400m wide channel of Tap Mun Mouth (塔門口). 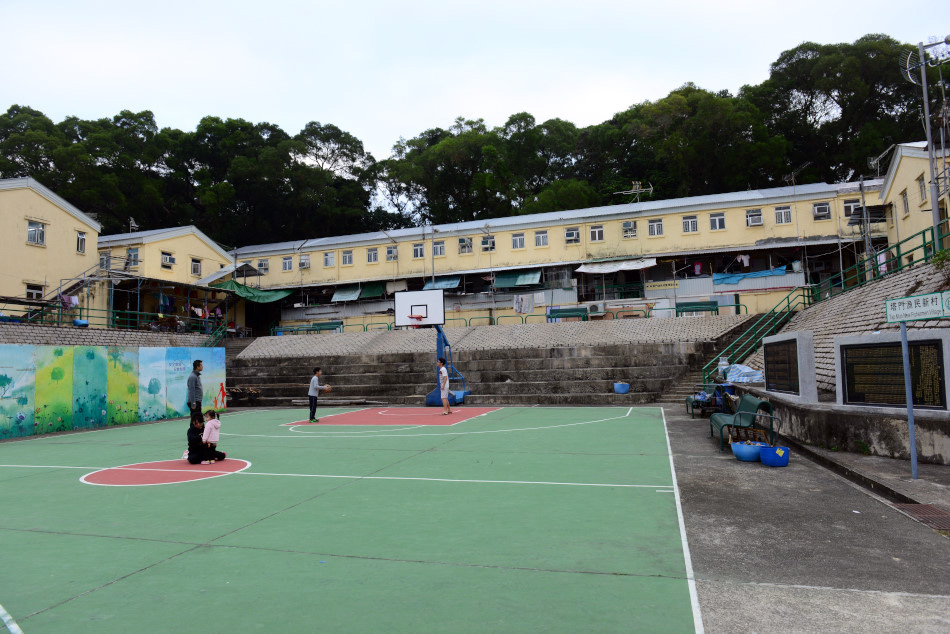 The utilitarian New Village of Tap Mun was erected in 1964 by a charity from New Zealand.  The houses are still occupied today. 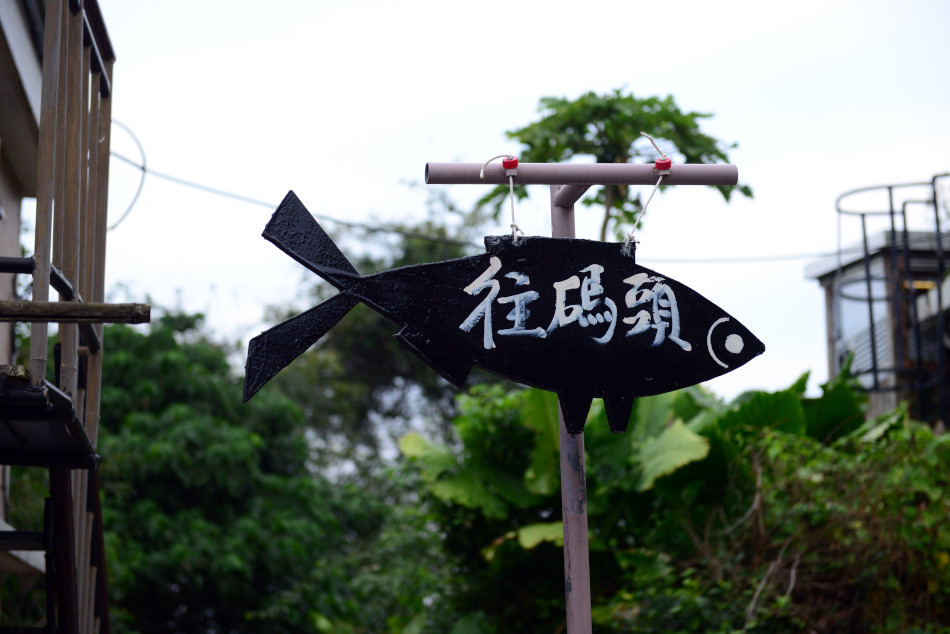 After the New Village, we were getting close to the pier again.

We could see the incoming ferry while on our way walking to the pier.

As we boarded the ferry, the sea and the fish farming areas seemed calm and relaxing.

After half a day on the small and remote Grass Island, it was time for us to return to Wong Shek Ferry Pier in Sai Kung.