Well known for its skyscrapers, Hong Kong actually has another face of lush green hills and pristine beaches to counterbalance the overwhelming urbanity. In fact, out of 1092 sq.km, about three quarters of Hong Kong’s land area is countryside comprised of hills, woodlands and beaches. No matter from which district in the city, nature is never far way. In 1976, the Country Park Ordinance was passed to enforce nature conservation. Under the ordinance, 24 country parks (郊野公園) have been established so far, protecting about 440 sq.km of natural landscape. Across the city, many neighbourhoods are situated within close proximity from one of these country parks, where Hongkongers treat them as urban backyards for morning exercises, afternoon picnics or evening hikes. For us living in Central and Western District, our closest backyard is Lung Fu Shan Country Park on the hill right behind Hong Kong University. We sometimes thought of walking up Lung Fu Shan and the adjacent Victoria Peak to catch the first glimpse of morning sun over the famous Hong Kong skyline. This has yet happened, but we do occasional short hikes when weather permits. From our home, it is just several minutes of bus ride to the trailhead of the 2.75km Lung Fu Shan Trail. Between Victoria Peak (太平山) and Mount High West (西高山), Lung Fu Shan or Hill Above Belcher’s (龍虎山) is a 253m hill right above the main campus of Hong Kong University. In 1998, Lung Fu Shan Country Park was established to protect the small patch of forest around the hill. With just about 0.1% of the total area of all country parks, the city’s smallest country park is home to almost one third of all species of birds, butterflies, amphibians, reptiles and mammals found in Hong Kong. Given the park is situated at less than 30 minutes walking distance to the central business district, Lung Fu Shan is surprisingly valuable to the city’s biodiversity.

Before Lung Fu Shan Country Park was established, I visited the Pinewood Battery (松林炮台) on Lung Fu Shan with my parents several times. Completed in 1905 by the colonial government, the historical battery was heavily damaged during WWII. In the Battle of Hong Kong (December 1941), the battery was under rounds of air raids before it was abandoned on 15th of December 1941. In the 1980’s the military structures were pretty much lying in ruins. For me as a child, the ruined battery was a great place for picnic or to play hide and seek. 11 years after the establishment of Lung Fu Shan Country Park, the ruined structures were listed as Grade II historical buildings in 2009 and become one of the main features in the park. Display boards and a trail linking all the major structures are set up are provided on site to tell the story.

On a fine Friday afternoon, we decided to drop by Lung Fu Shan Environmental Education Centre near the park entrance at Kotewall Road (旭龢道). Operated by Environmental Protection Department and University of Hong Kong, the small interpretation centre housed in a listed historical bungalow just a stone throw away from Hong Kong University was a pleasant surprise. Built in 1890, the 131-year bungalow was home for the watchman who protected the adjacent Pokfulam Filter Beds, the facility used to filter drinking water for Pokfulam Reservoir nearby. The former watchman’s residence is now converted into the visitor centre of Lung Fu Shan Country Park, welcoming anyone who wishes to know more about the ecology and biodiversity of the area. Apart from insect specimens and wildlife photographs, we were particularly interested in the videos interviewing the former residents of the bungalow complex, who were occupying the three historical houses in the complex until 1996. At the centre, we had a delightful chat with the staff there and picked up The Pulse of Nature – Mid-Levels West, a book of writings, illustrations and photographs that offers a variety of perspectives that explores the natural context of Mid-Levels West around Lung Fu Shan. 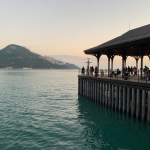