With its extensive waterway and transportation network, Tunxi (屯溪) has long been a trading centre in the Anhui region since ancient times.  Today, it also serves as a good base for visiting the two UNESCO world heritage sites in Anhui, Huangshan (Yellow Mountain) and the Huizhou villages.  Also known as Huangshan City (Yellow Mountain City), Tunxi is conveniently connected to the mountain trailheads and the cable car terminals at the mountain foot with frequent buses.  At the heart of the old town is the well preserved historical main street simply called Laojie or Old Street (老街) which is about 1.27km long running in the east-west direction. Laojie reached its heyday in the Qing dynasty when it served as a commercial hub for businesses, especially tea trading. Today, Laojie has become a popular souvenir street, serving tourists heading to and from Huangshan.  Timber buildings and restored Huizhou buildings with white washed walls flanked both sides of the pedestrian street.  Vendors sell all kinds of souvenirs from the region, such as tea leaves, ink-stones, chili sauce, etc.  At night, vivid lighting and vibrant retail activities lit up the old buildings of Laojie, enhancing the enchanting atmosphere of the pedestrian street.

The Laojie of Tunxi offered us an introduction to Huizhou (Anhui).  For two nights the Youth Hostel at Laojie provided us a comfortable base to explore the unique architecture, food, and culture of the region.

With its white washed walls and dark tiled roofs, Laojie remains as a showcase of traditional Huizhou architecture in Anhui.

Timber panels are still being used as shop gate along Laojie.

Some of the better preserved buildings have been converted into museums. Wancuilou (萬粹樓) Museum has a display of private antiques collections. 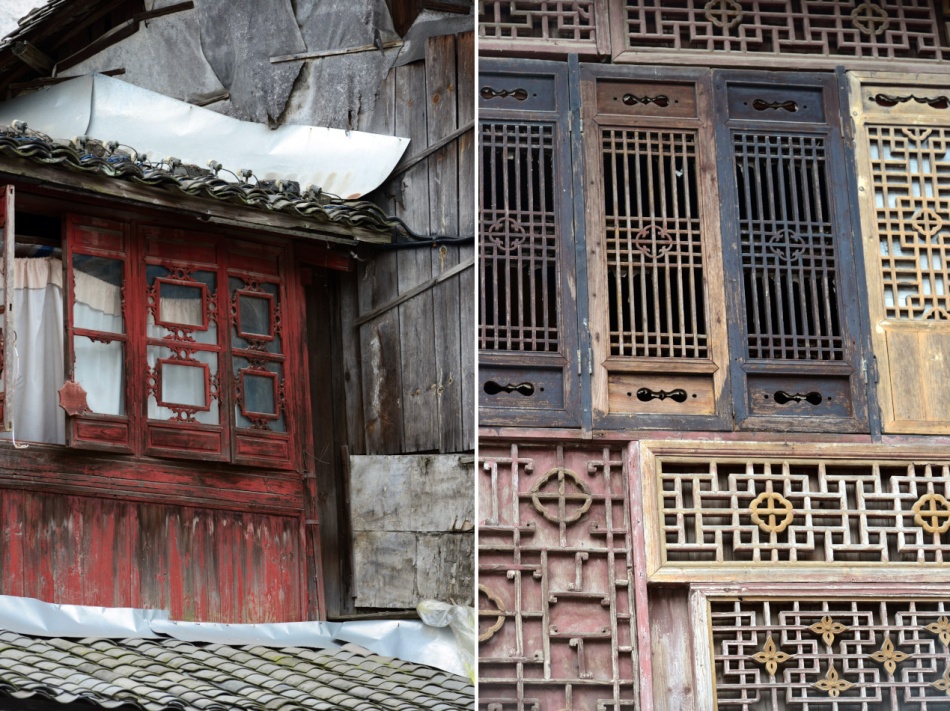 Vendors selling all kinds of souvenirs from traditional paper to spicy sauce revealed what Anhui is well known of among local tourists.

For us, the century-old herbal medicine shop was one of the most attractive shops at Laojie.

Meishi Renjia (美食人家 ) is a popular restaurant near the entrance of Laojie. We tasted a number of local dishes including dumplings, handmade noodle with meat+bean sauce, bamboo shoot salad and stuffed lotus root with sweet sticky rice in osmanthus syrup.

A restaurant specializes in Huizhou cuisine has a little booth at the front of the restaurant selling fried hairy tofu (毛豆腐).

In the midst of traditional Huizhou architecture, two buildings stood out with their western touches.  One of the buildings was decorated with a communist star and the washes of old blue paint on other one revealed the building’s past glory and uniqueness.

Stone products such as these bowls are popular here. 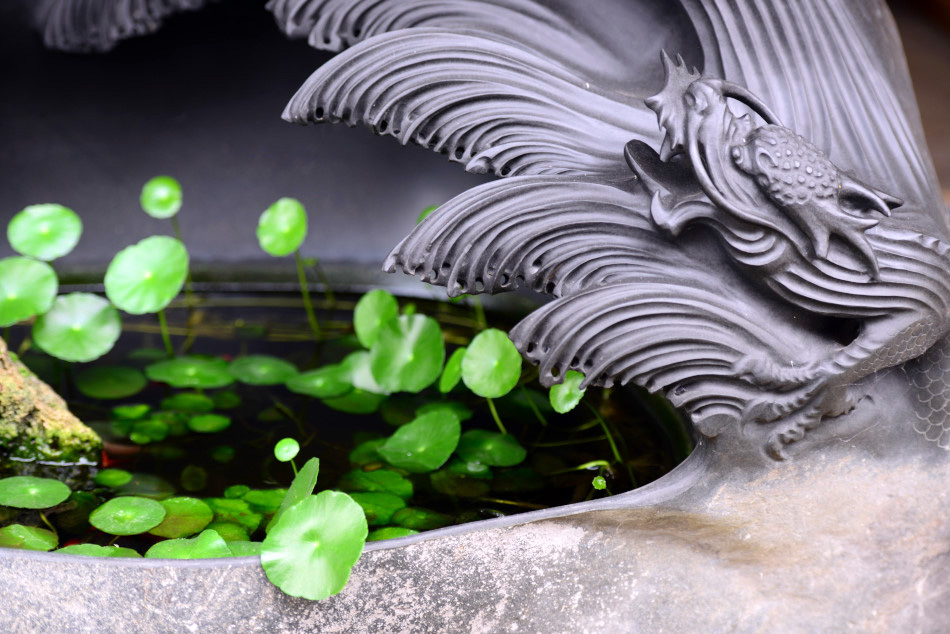 Despite writing with ink and brush is no longer popular nowadays, the famous She inkstone (歙硯) from She County in Anhui  with meticulously carved figures remain as a popular souvenir from the area. 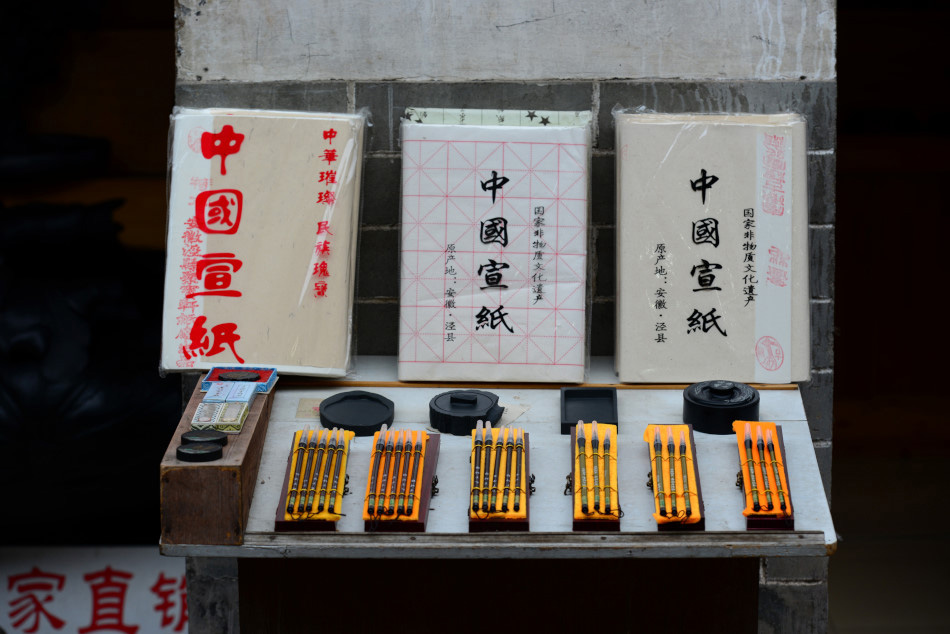 Other than inkstones, Chinese brushes and xuan paper are among the most popular souvenir available in Laojie.

Xin’an River lied in south of Laojie, where a local fisherman was testing his luck. 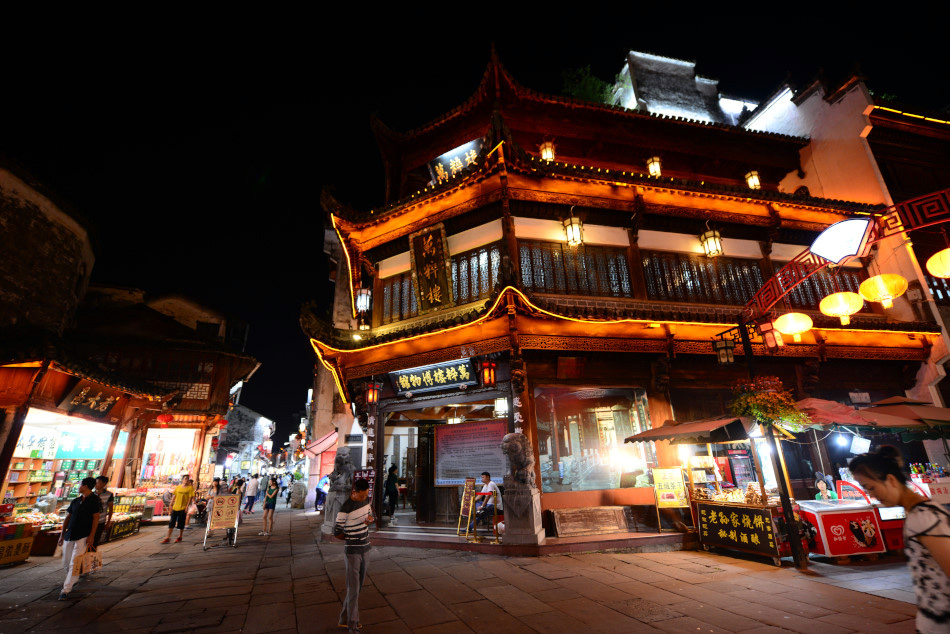 There are many restaurants serving Huizhou cuisine in the Laojie area which makes Laojie easily become a popular place for social gathering.

Most shops were open till late at night. 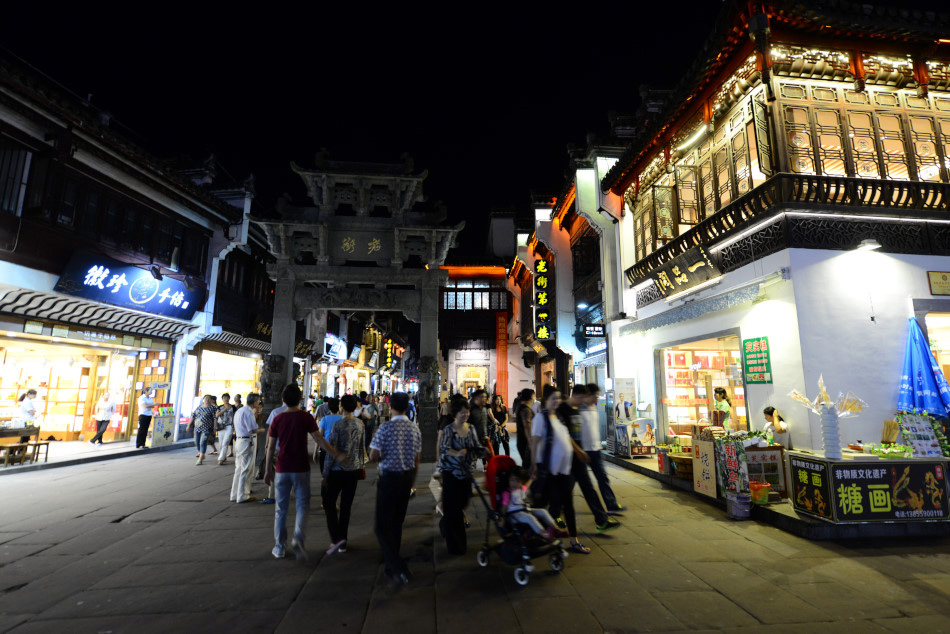 The entrance gateway of Laojie is a popular gathering place for tourists and the locals. 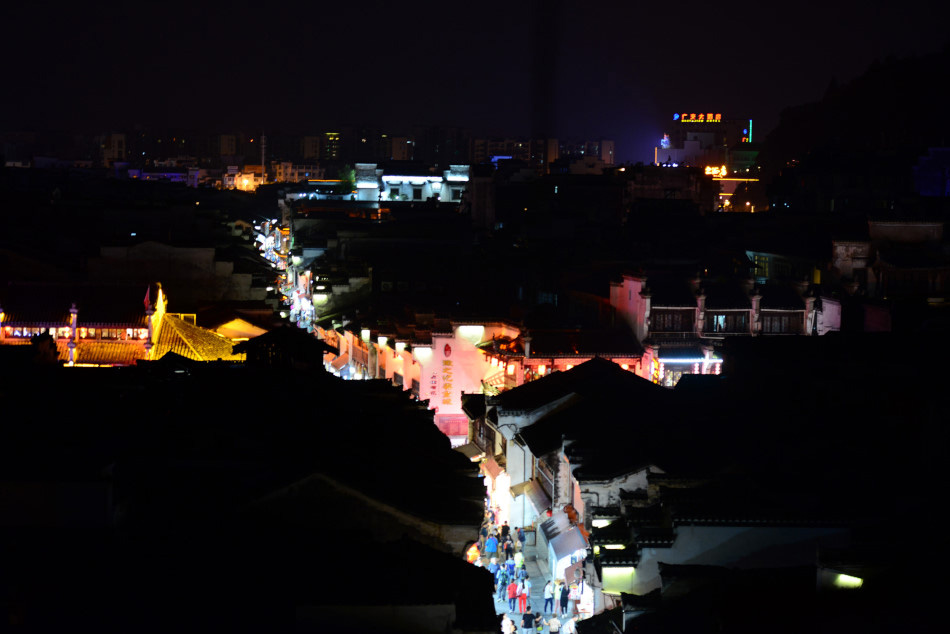 This is the view of Laojie from our hostel window. The street remained active until late at night. 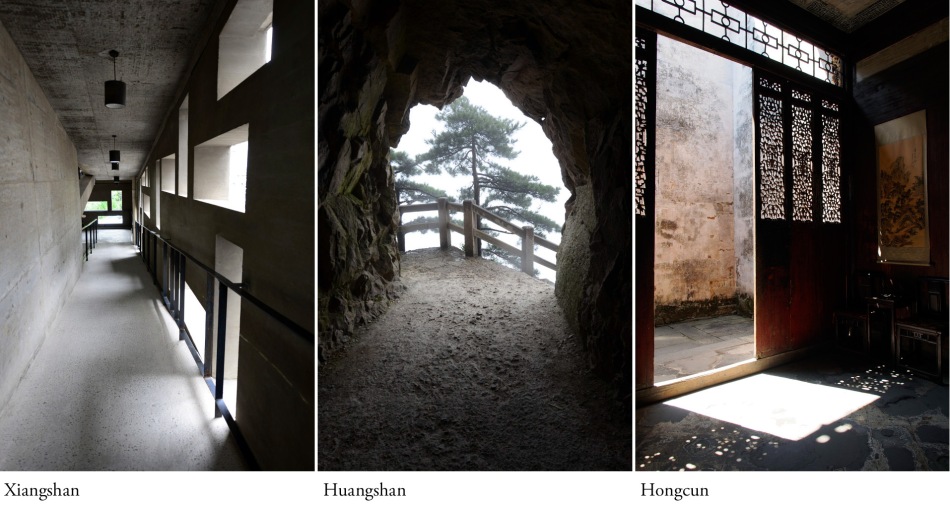 In Mid-September, we made a short trip to the province of Anhui Southern China. It has been over a decade since we last backpacked in China. Compared to the culture of arid yellow earth, mighty military history and ancient Buddhist temples in Shanxi and Hebei that we visited in the past, Anhui and the surrounding areas belong to a landscape of green teas, lotus ponds, and misty mountains.

From Hong Kong, we first flew to Hangzhou, the capital of Zhejiang Province, from where we took a bus to the town of Tunxi. Also known as Huangshan City, Tunxi is the transportation hub for most travelers visiting Huangshan. A stroll on the Laojie (Old Street) in Tunxi prepared us to the crowded experience that may happen in any tourist spots frequented by local visitors. We took Tunxi as the base to visit Hongcun and Xidi, the famous ancient villages nearby that captured the imagination of many movie directors and local painters. On Huangshan (Yellow Mountains), the magical mountains renowned for the mysterious scenery, we spent two days braving the centuries old stepped trails awaiting for magical moments when spiky granite peaks revealing themselves under the veil of mist and fog. Returning with burning knee pains and muscle ache from Huangshan, we had a dose of China’s contemporary architecture at the National Academy of Art in Xiangshan, near Hangzhou. While this brief visit reminded us our fond travel memories in China, it may well reignite our interest in making longer journeys in other parts of China in the near future.