Passing through the Siq once again, we entered Petra at around 08:30.  Before reaching the theatre, we made our way to a stepped path towards the High Place of Sacrifice.  For an hour we hiked up the hill behind the Royal Tombs with occasional views of the ruined city and surrounding landscape.  We finally reached the high alter where ancient Nabateans made sacrifices to their gods, an open area with a raised platform for ceremonies.   From High Place of Sacrifice we walked west toward Wadi Farasa and the Snake Monument.  At Wadi Farasa, we arrived at the Tomb of Soldiers.  Due to the sculpted armour on the statues, many believe the tomb were belonged to some Roman officers in the 2nd Century.  Though some historians disagreed, arguing that many architectural elements on the tomb facade actually predated the Roman Conquest of Petra, and the tomb was probably constructed in the 1st Century.

At around 14:30 we made it to the Snake Monument, a destination that requires one of the longer tourist hikes.  It took us a while to actually locate the snake monument.  In fact, we saw the monument only after a local Bedouin pointed it out for us.  At the Snake Monument, we encountered a Bedouin family who still lives in Petra.  There were two kids in the black Bedouin tent (probably made with goat hair according to traditions). We played football with them for about 15 minutes before heading back.  Before Petra was designated as a World Heritage Site in 1985, there were about 150 Bdoul Bedouin families living in the caves of Petra.  After Petra was inscribed in the UNESCO World Heritage list, most families were relocated to the new village of Um Sayhoun nearby.  Today, about 10 families who refused to move out still remain inside the archaeological park, living off mainly from the tourist industry.

Back at the Royal Tombs, we decided to hike up the hill opposite to the famous Treasury for the famous birdeye view.  The steps were steep, and the hike took approximately 45 minutes.  The view was quite impressive despite the Treasury was in shade.  On our way down, we got ourselves a can of refreshing pop.  Without it, we would probably take us two times longer to reach the exit of Petra.

The Cult Chamber is an interesting and mysterious small building in a valley in Wadi Farasa East.  Its original purpose was unknown.

The boulders and stones surrounding the Cult Chamber are resulted from occasional flash floods.

Known as the Renaissance Tomb, Tomb BD 229 contained features that resemble the style of Italian Renaissance.

The interior of Renaissance Tomb was excavated in 2003. Containing 14 pit graves, all had been looted in the Middle Age.

Near Wadi Farasa, the Soldier Tomb complex once housed a tomb and banquet hall accessed via the central courtyard surrounded by columns. 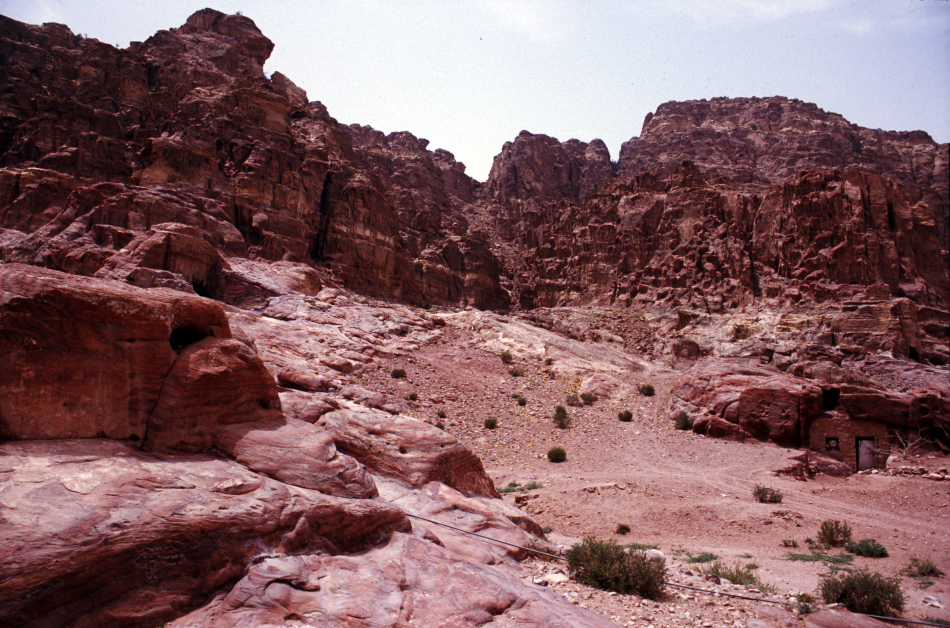 At the area of the Snake Monument, we arrived at an open valley with tombs and small structures along the rock cliffs.

It is hard to believe such rugged landscape was once hosted a majestic capital city.

We were distracted by a group of goats appeared near the Snake Monument.

The goats belonged to a Bedouin family living in the area.

Since 1985, most Bedouins living in Petra were relocated in a modern settlement nearby.

We met the two Bedouin kids who invited us to play football with them.

We had some brief fun with the Bedouin kids despite the afternoon heat.

Back at Palace Tomb, we decided to head for the lookout of Jabal al-Khubtha.

The 40 minute hike to Jabal al-Khubtha proved more than worthwhile. 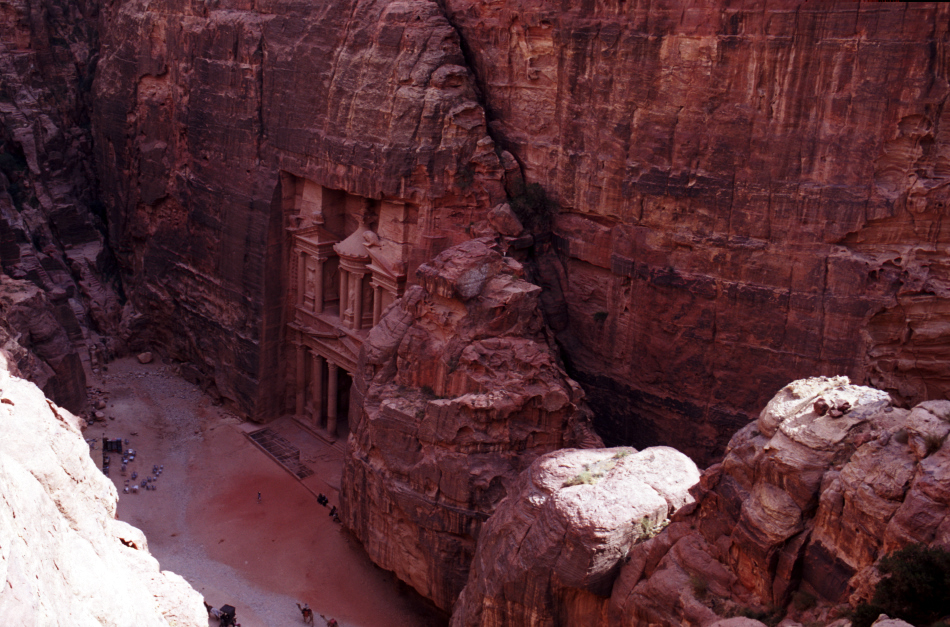 Jabal al-Khubtha offered one of the best view of the Treasury.

Unless arriving at Jabal al-Khubtha in the morning, one would likely find the Treasury in shade.