At the ancient crossroad where Silk Road caravans crossed the trade routes of the Jordanian Rift Valley, the Rose City once thrived as a major trading hub between the Asia (China, India and Arabia) and the Mediterranean world, and the capital of Nabataean kingdom.  From 4th century BC to the 4th century AD, Petra flourished for seven centuries until the shifting of trade routes and the Galilee Earthquake of 363 AD, which led the city into a irreversible decline.   Petra was enlisted to UNESCO’s World Heritage List in 1985 and has become one of the most iconic attraction in the Middle East, thanks to After a peace treaty was signed in 1994 between Jordan and Israel, tourism has thrived in Jordan ever since.  From 138,577 in 1994 to 918,136 in 2010, tourist numbers have skyrocketed until the Syrian Civil War broke out and greatly affected international tourism throughout the region.  Back in 2006, our two full days at Petra was definitely the biggest highlight of our experience in Jordan.

After a long day on the King’s Highway, we had some good rest at Petra Moon Hotel.  After an early breakfast at 6am, we quickly headed down the road for a 5-minute walk to Petra’s ticket office.  After obtaining our tickets, we walked over to the entrance of the Siq, a narrow gorge serving as the natural entry path into the lost city.  At several occasions, the Siq became so narrow and dark that made us felt like walking in a tunnel no wider than a car.  A water channel, at about 1m above ground, was carved on the cliff surface along the Siq, reminding us the marvelous engineering in the ancient times that brought water from flash floods into Petra for storage and daily use.

At the end of the Siq, about 1.5km from the gorge entrance, we arrived at the spot where every visitor would stop for the iconic photo of the rock-cut Treasury (Al Khazneh).  No matter how many times the Treasury has appeared on travel photos and TV travel shows, nothing could prepare us emotionally for our first encounter with the stunning view.  Groups after groups of tourists gathered in front of the iconic Treasury building to take photos.  Taking the iconic photo of framing the Treasury between the narrow Siq passage without any tourist required good patience.  Unlike how Steven Spielberg depicts in his movie, fans of Indiana Jones and the Last Crusade would be disappointed to find no deadly traps, fancy sculptures or glittering treasure behind the famous rock facade.  The interior of the Treasury is actually just an empty cave carved out from the cliff.  Legends have it that robbers and pirates might have used the building to store their looted objects.  Probably this explains the reason why the building is called the “Treasury”.  Though most archaeologists would agree that the Treasury was likely used as a temple and a royal tomb of the Nabataeans. 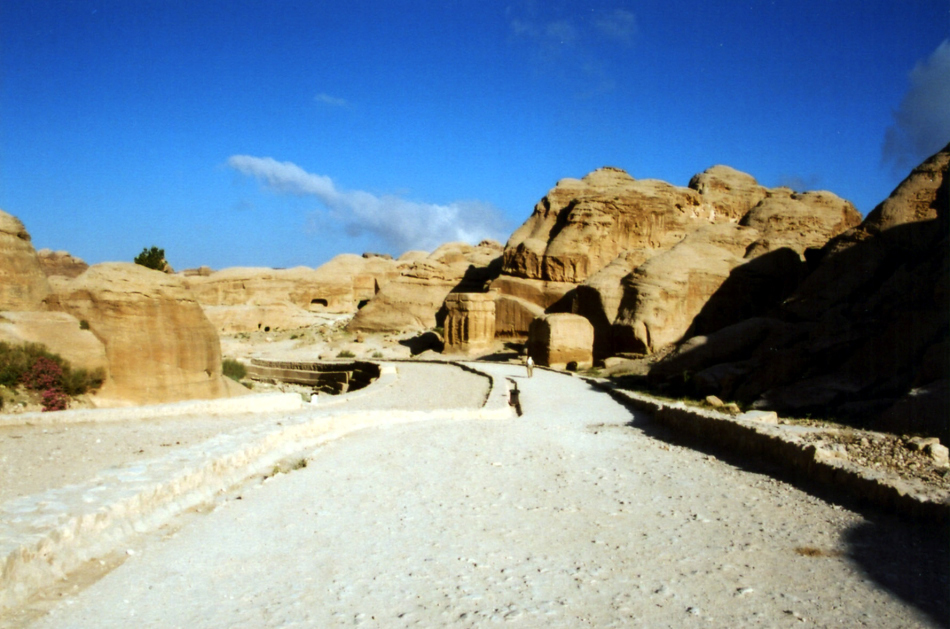 A sandy path led us towards the entrance of the Siq.

One of the first monuments we encountered was the Obelisk Tomb.  The four obelisks on the tomb facade are actually nefeshes, pointed pillars to embody the people buried in the inner chamber.

The rugged desert canyons at Petra is largely made of sandstone. 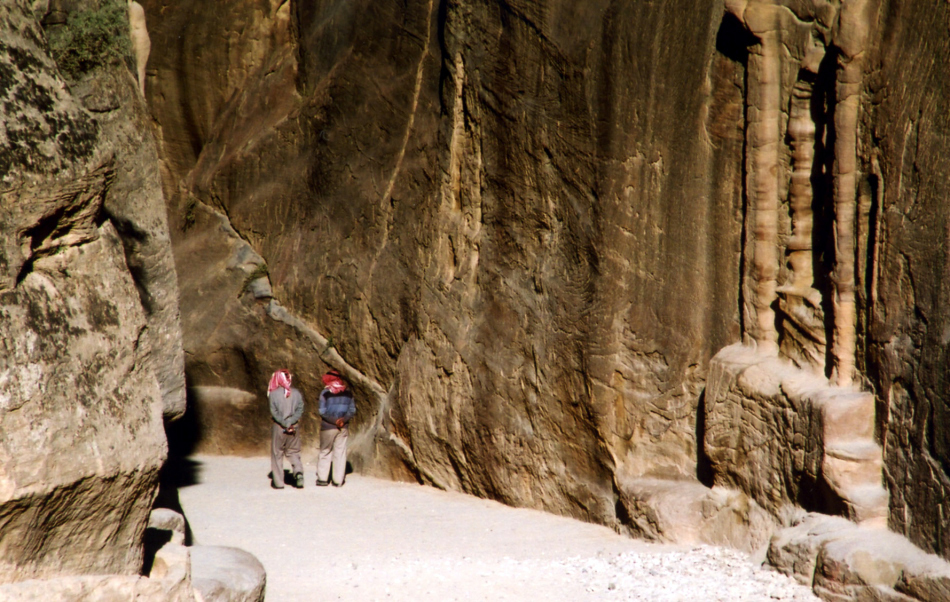 We followed a few local visitors to enter the Siq, the winding and narrow canyon leading into the lost city. 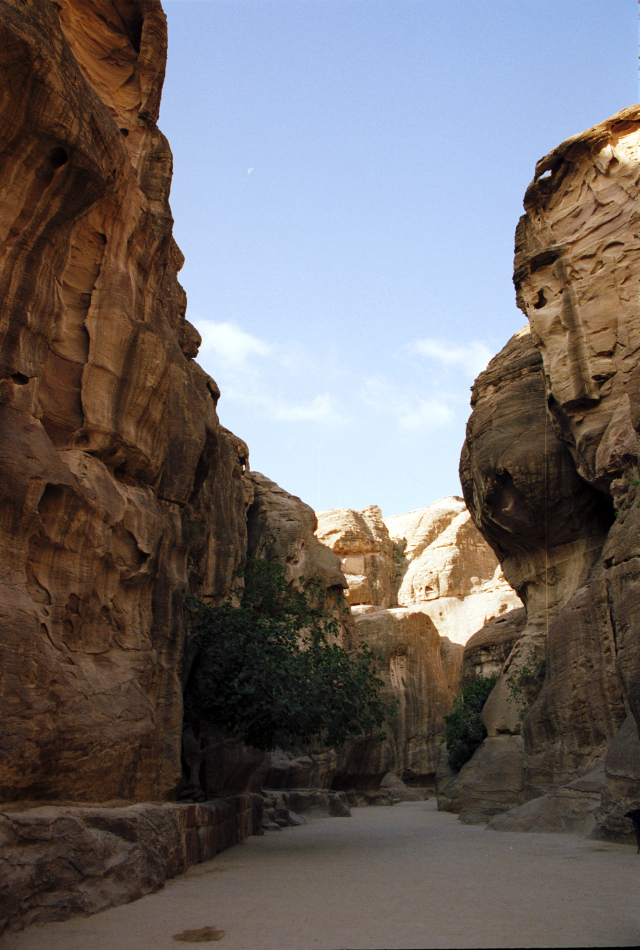 The 1.2km Siq passage provides the most dramatic approach to the lost city.

The Siq is formed by a geological fault split apart by tectonic forces.  The height of the cliffs range from 91 to 182m in height.

From aerial photos one can clearly see how narrow the Siq is – a split in the rose-red sandstone plateau no wider than 3m at some points. 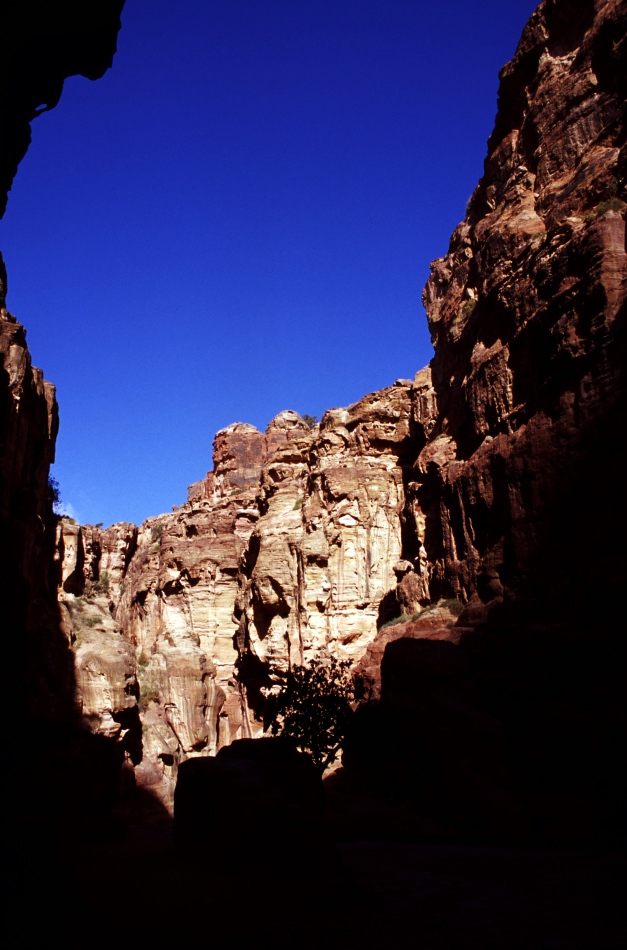 Under the early morning sun, the rock cliffs along the Siq glowed in a golden colour.

Certain parts of the Siq are in shade for almost the entire day.

The 1.2km long water conduits along the Siq are still visible.

The water conduits and the pavement were built in the last decades of the 1st century BC.

At last, the majestic view of the Treasury of Petra emerged between the cliffs. 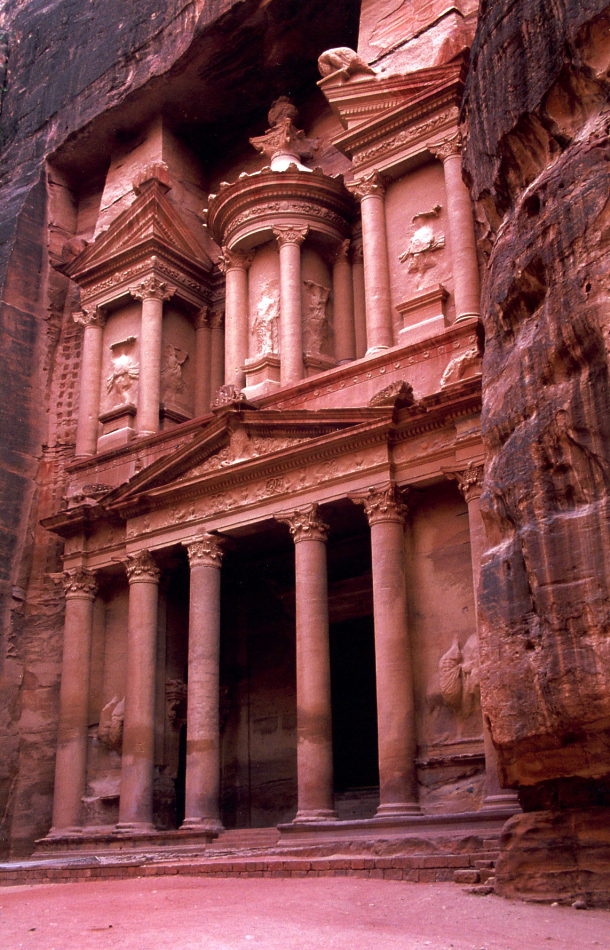 The famous rock facade of the Treasury was a prominent filming spot for Steven Spielberg’s Indiana Jones and the Last Crusade.

The Treasury, or Al-Khazneh, was carved out of the sandstone rock cliff as the mausoleum of Nabatean King Aretas IV in the 1st century AD. 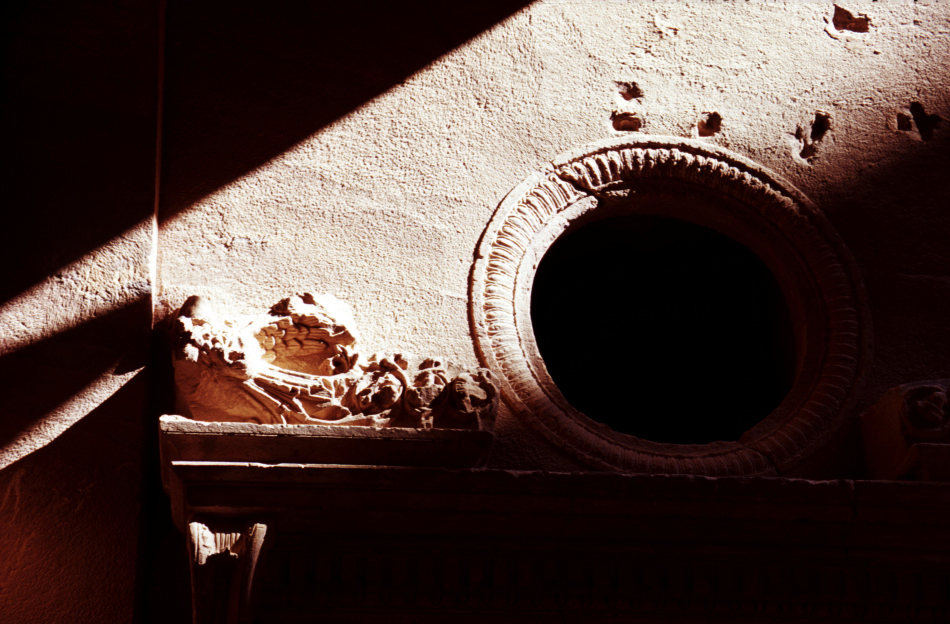 In the 19th century, nomadic bedouins in the region believed the iconic structure contained treasures left by bandits or pirates.

Humidity from tourist crowds and years of touching and rubbing have caused damages to the sandstone building.