After Sulamani, Dhammayangyi and Thatbyinnyu, Win Thu suggested we could shift to see some smaller and unique temples in the nearby area.  We headed south from Old Bagan to the village of Myinkaba.  We first stopped by Napaya Temple to check out the Brahma sculptures.  Instead of Buddhist images, Napaya is famous for its Hindu wall relief.  The temple was smaller than what we imagined, but the relief was quite remarkable and unique.  We stayed in Napaya for a short while, then moved on to Manuha Temple, one of the oldest temples in Bagan.  Manuha was quite interesting for us because firstly it still remained as an active worshiping place and secondly it housed several prominent Buddhist statues.  Lastly we dropped by the Gubyaukgyi, another small temple famous for its Jataka murals.  Luckily temple keeper was around and we were allowed to get into the temple. 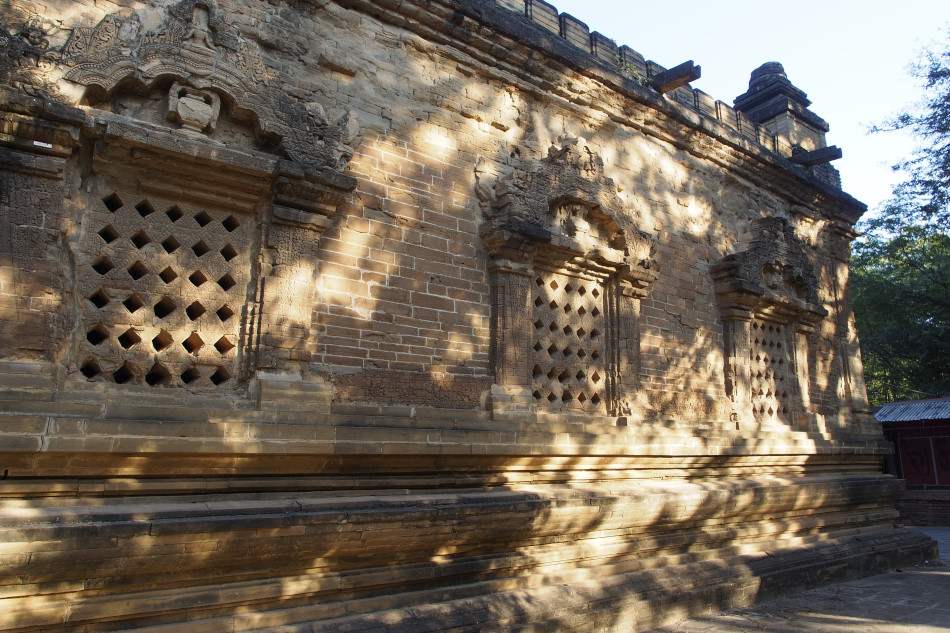 With the small openings on the brickwork, Napaya Temple was small and dark inside and we were the only visitors. 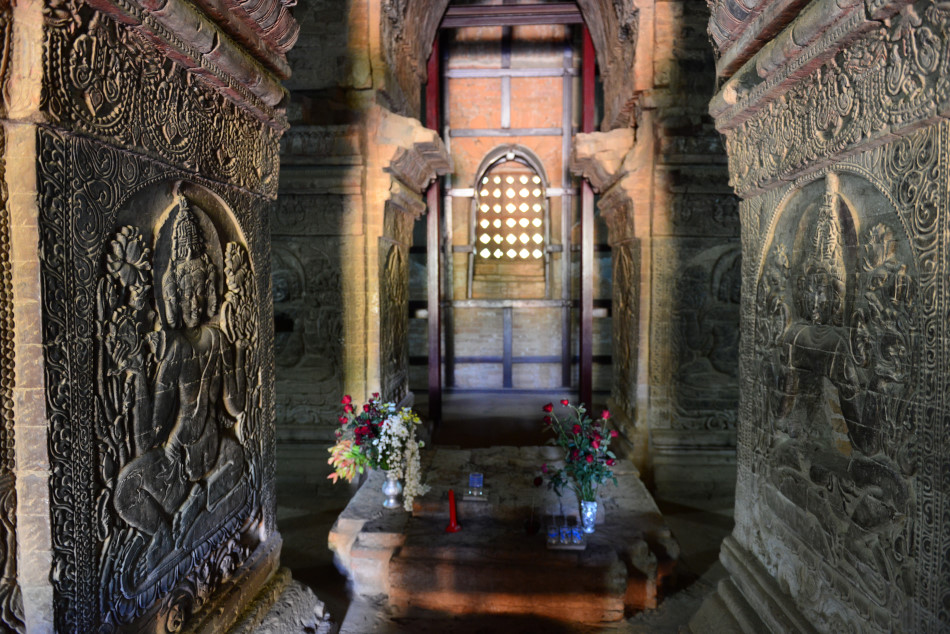 At the centre of Napaya, there was the main altar surrounded by the Brahma relief sculptures. 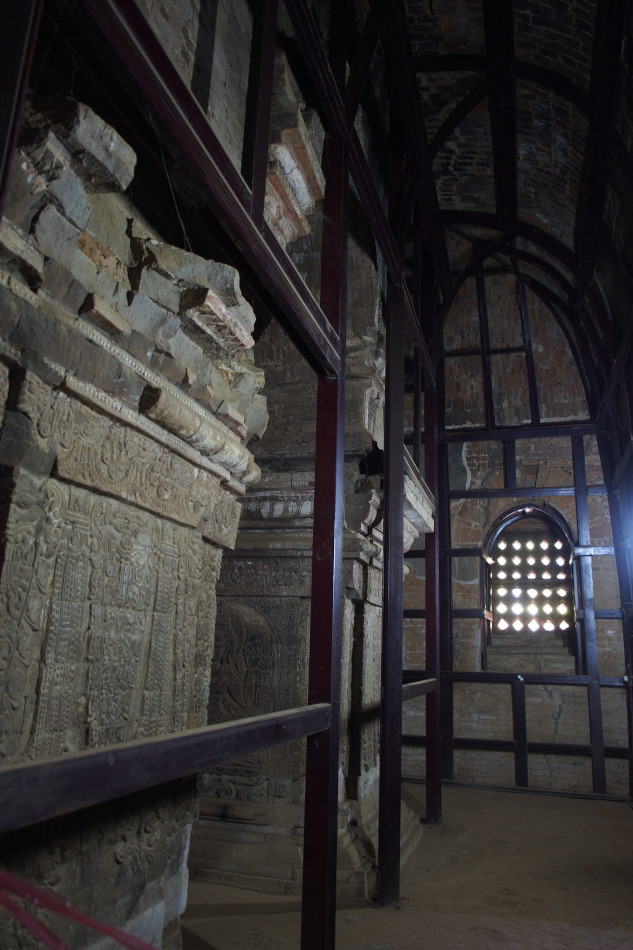 Though not pleasant to the eye, the metal sub-frame inside Napaya Temple helps to prevent further deterioration of the original structure. 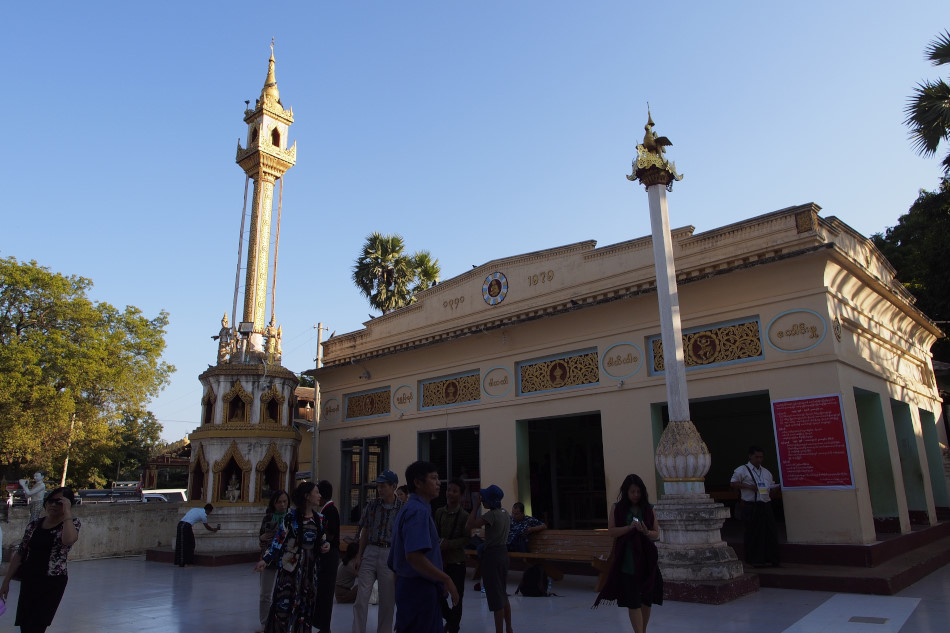 Near the Napaya, the Manuha Temple offered a completely different picture: a busy place of worship full of local visitors. 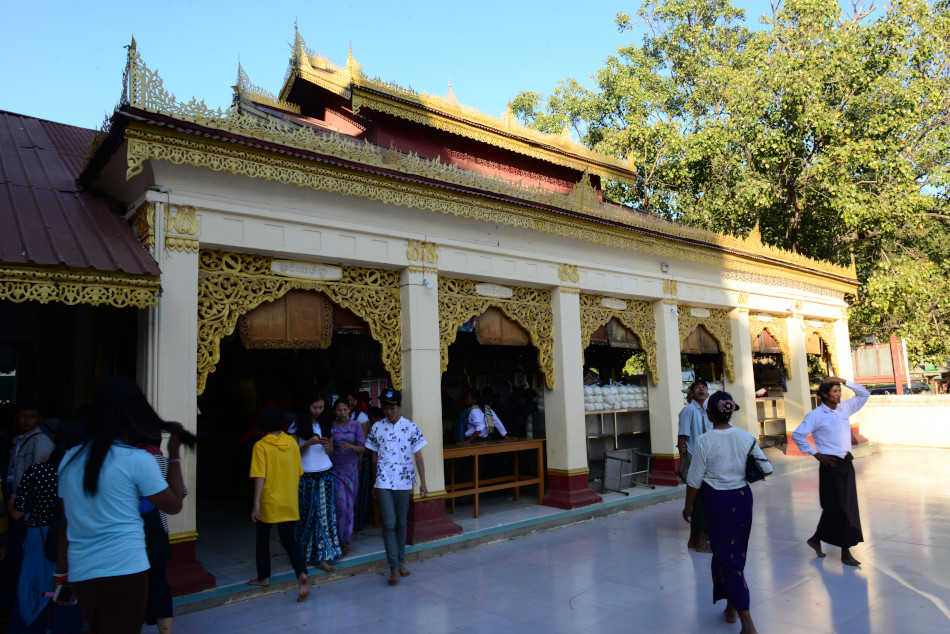 There are several buildings and four different images of Buddha at Manuha Temple. 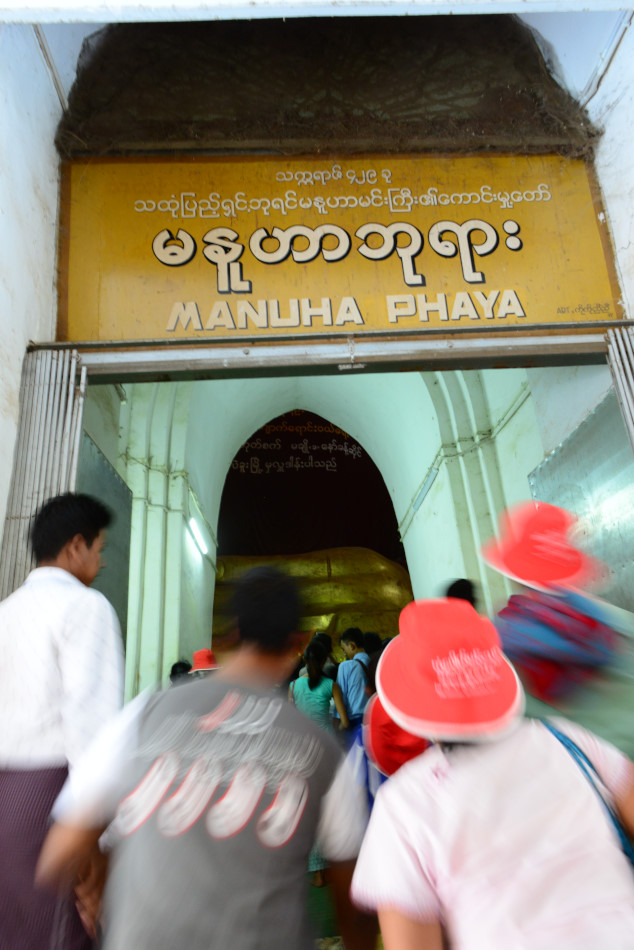 The largest seated Buddha image is located in a building at the centre of the temple complex. 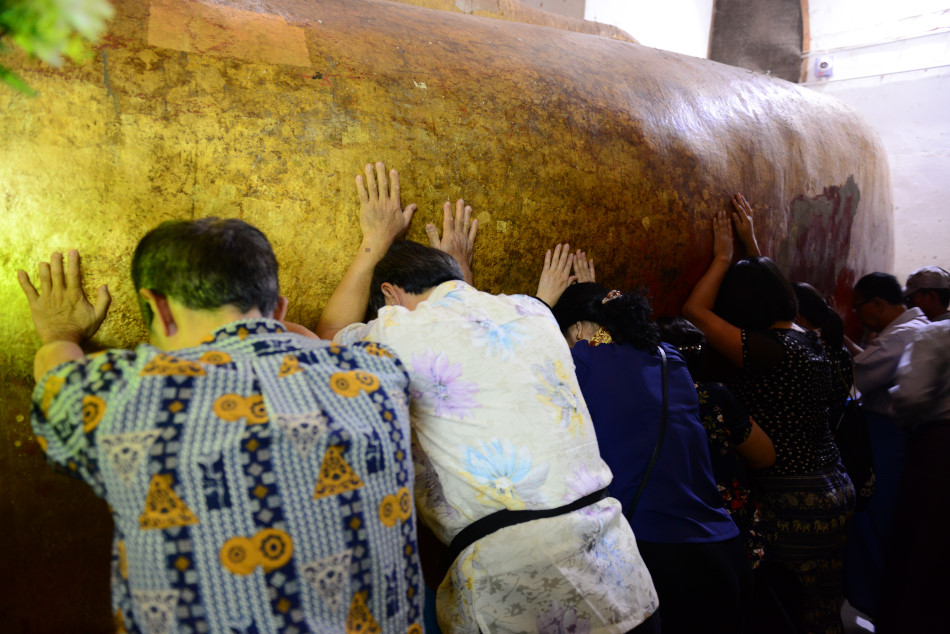 A large crowd of worshipers gathered at the base of the Buddha statue. They placed their hands and faces onto the golden statue, and murmured prayers with their eyes closed. 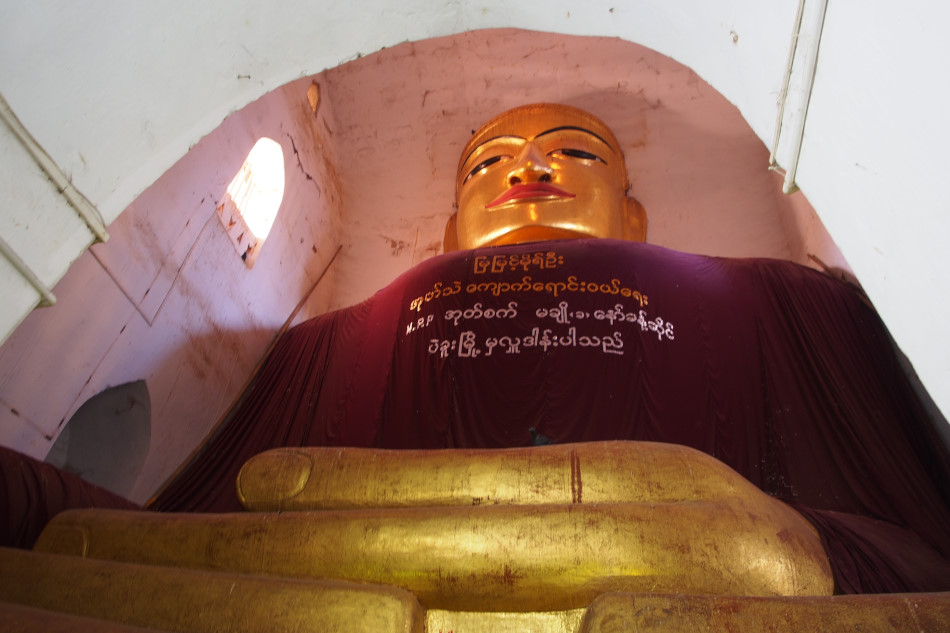 We were overwhelmed by the scale of the Buddha when standing right in front of the statue. 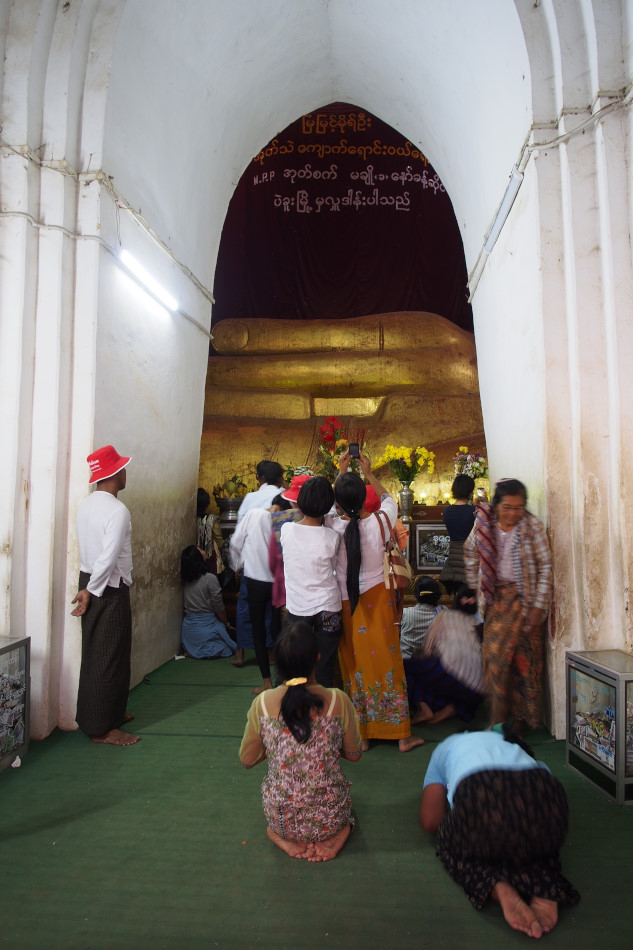 We stood behind the worshipers.  Through the entrance archway, we could only see the base of the Buddha and his crossed legs. 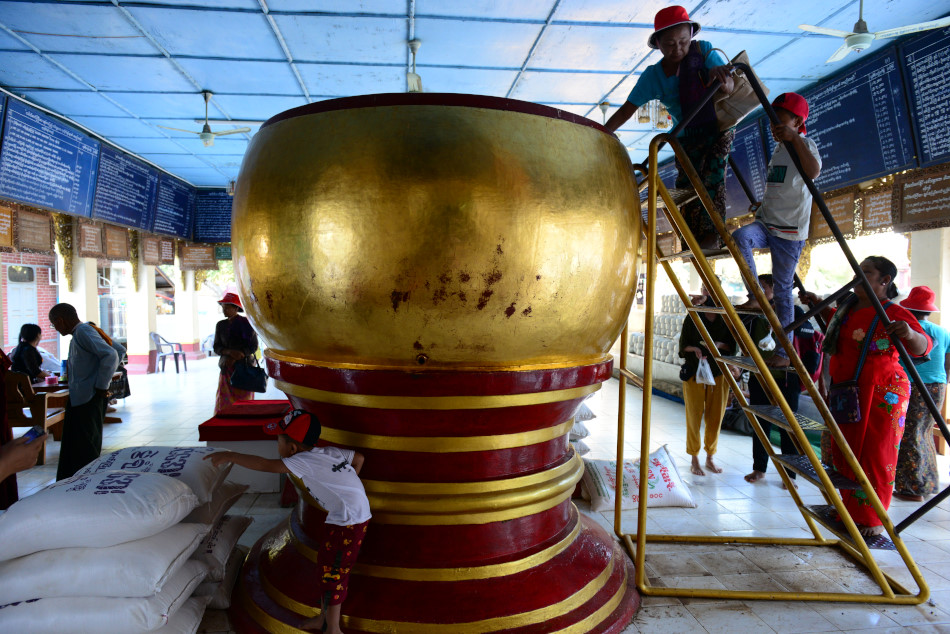 Right across from the seated Buddha, there was huge golden alms bowl on display.  Visitors lined up to climb a ladder and look inside the bowl. 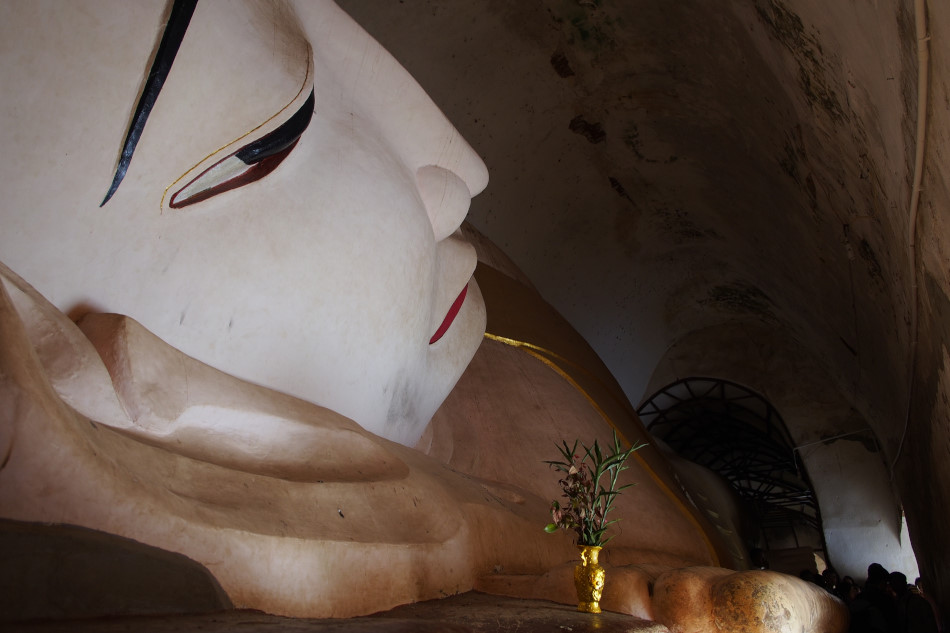 In another building, we came face to face with a 90 foot reclining Buddha, a fine example of the iconic posture of the Buddha lying on his right about to enter the parinirvana. 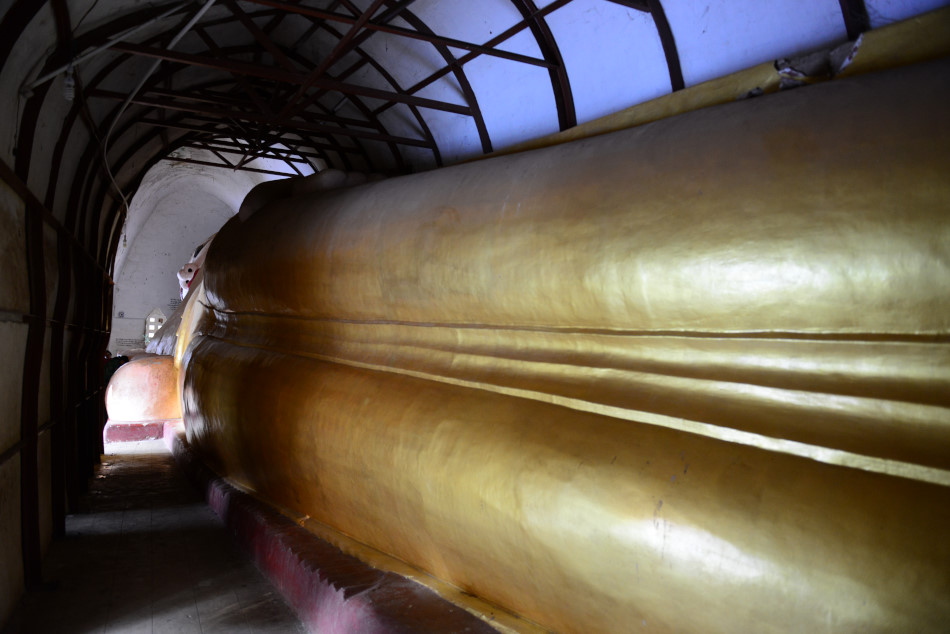 The reclining Buddha is housed in a simple shelter just large enough to cover the lying statue. 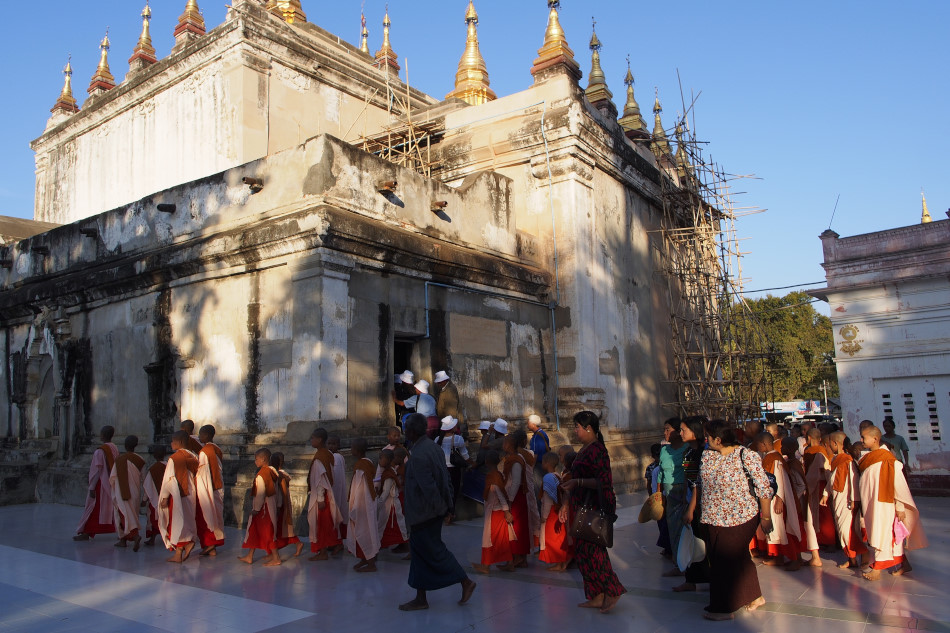 A group of young monks walked past the building that houses the reclining Buddha. 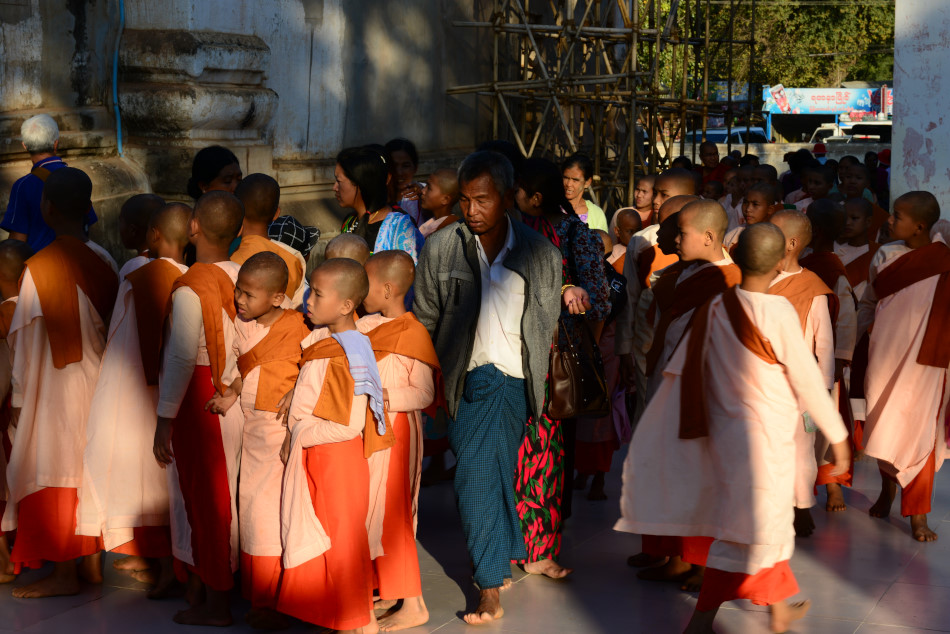 Young monks is a common scene throughout Myanmar. 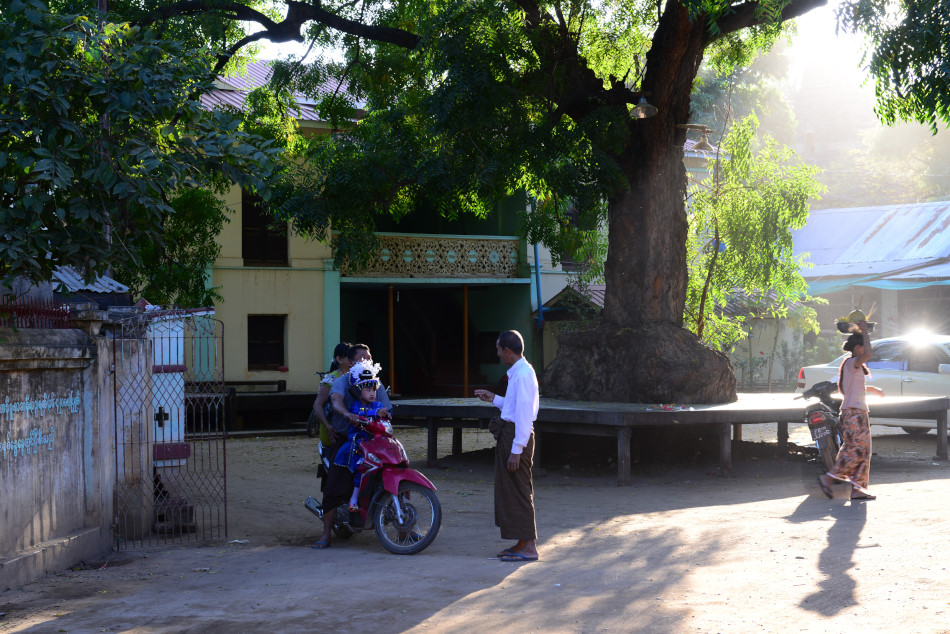 After Manuha Temple, we followed Win Thu back to the sleepy village of Myinkaba. 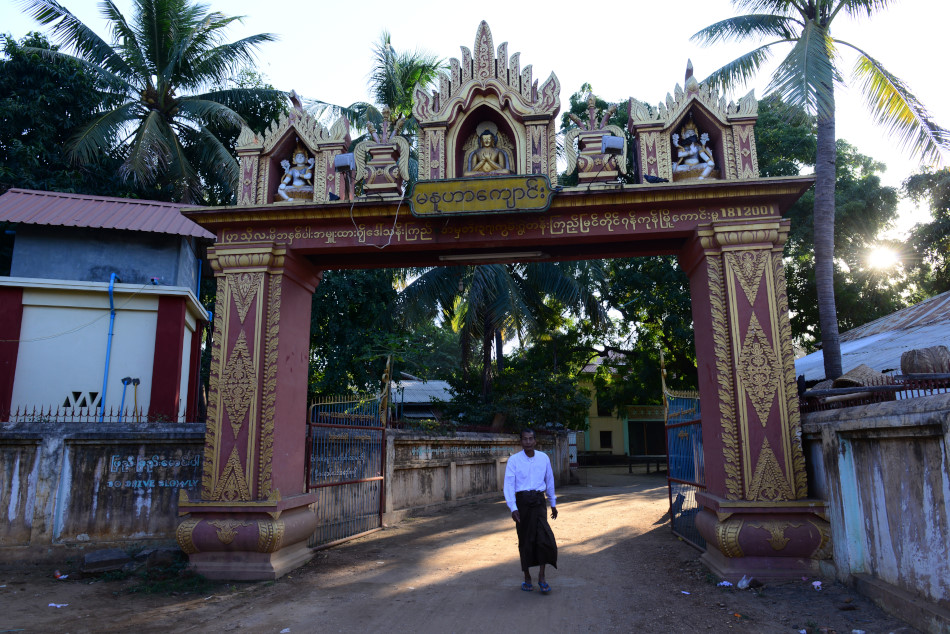 The village of Myinkaba is famous for traditional lacquerware. 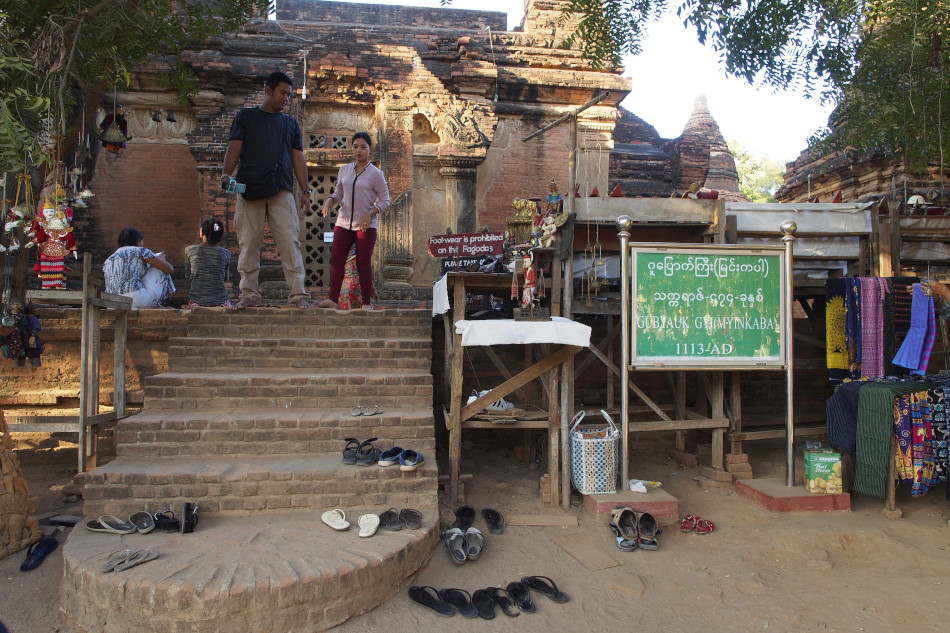 The last temple we visited in Myinkaba was Gubyaukgyi Temple.  We came to see the well preserved frescoes made by the Mon people. 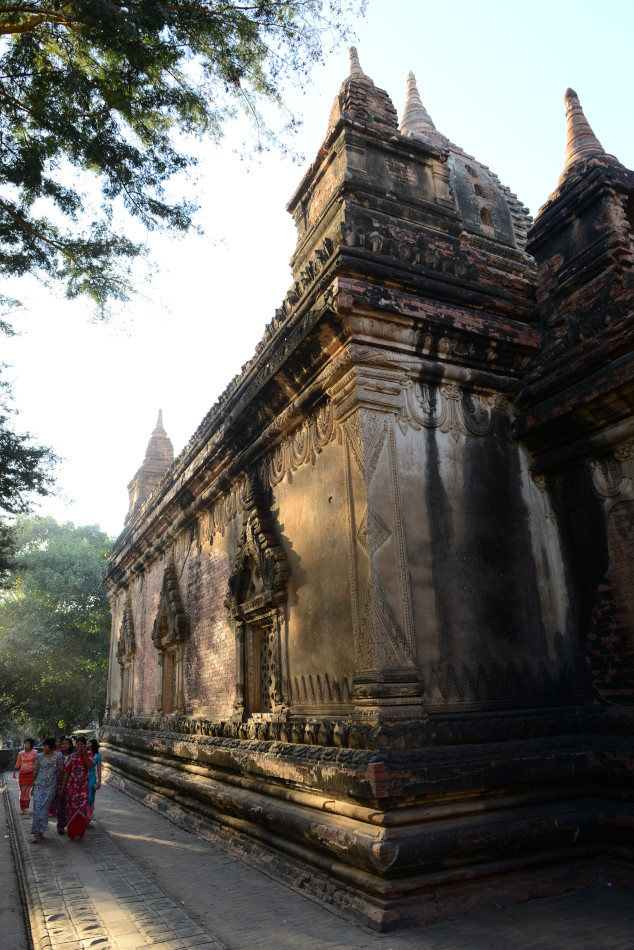 Built in 1113 AD by Prince Yazakumar, Gubyaukgyi Temple is another small gem with fine examples of Indian and Mon architectural ornaments. 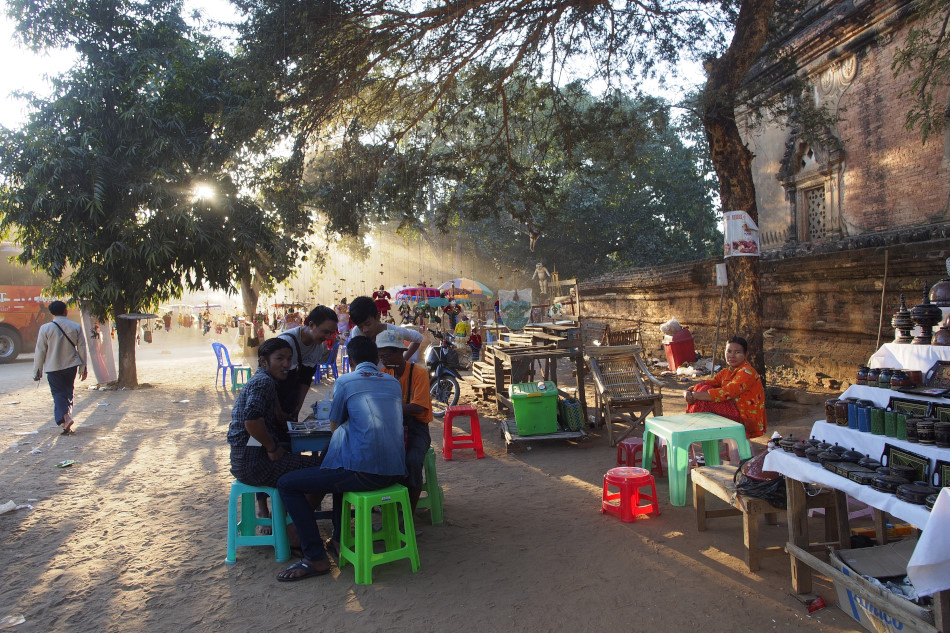 We were lucky that the temple keeper was around to let us in to check out the frescoes.  Outside the temple, souvenir and puppet vendors gathered under the late afternoon sun. 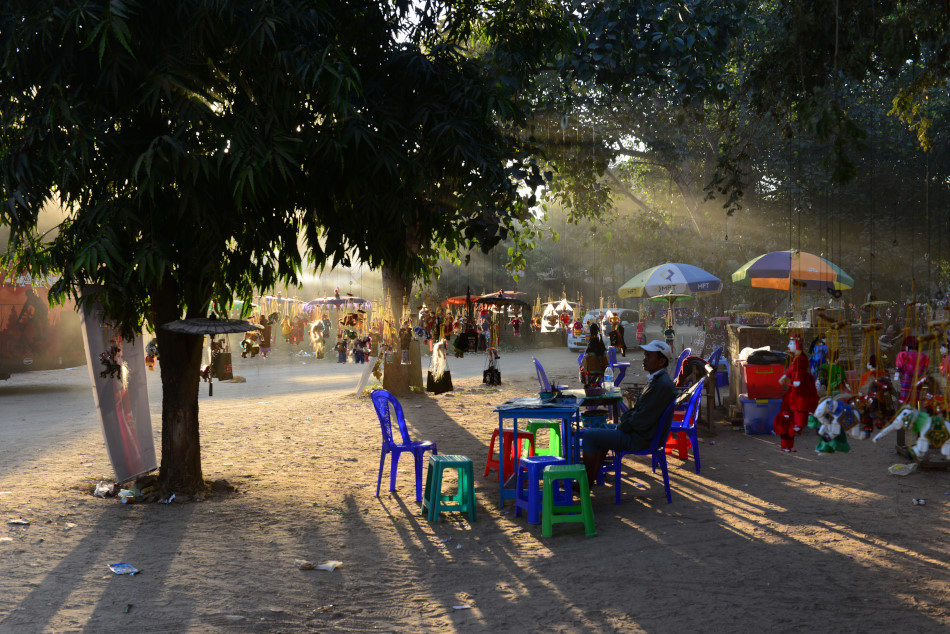 The sun was already quite low after our visit of Gubyaukgyi, urging us to find a good spot to watch Bagan’s sunset one last time.