Considered as the first empire in Myanmar, the legacy of the ancient Bagan Kingdom is what drawn all visitors coming to the dry plains at the eastern bank of the Ayeyawaddy River today.  With over 2000 ruined pagodas concentrated around a few villages, Bagan is truly one of the most wonderful place to visit in Southeast Asia.  After seeing Shwezigon, probably the most active temple still popular with pilgrims today, we moved on to check out some of the less intact pagodas nearby.

The first was Htilominlo Temple.  Built on the spot where King Htilominlo was chosen as the next king, Htilominlo was eventually named after the king himself.  Topped with a sikhara, an ornamental tower originated from Hindu architecture in Northern India, the 46m pagoda is a majestic brick structure plastered with stucco carvings. 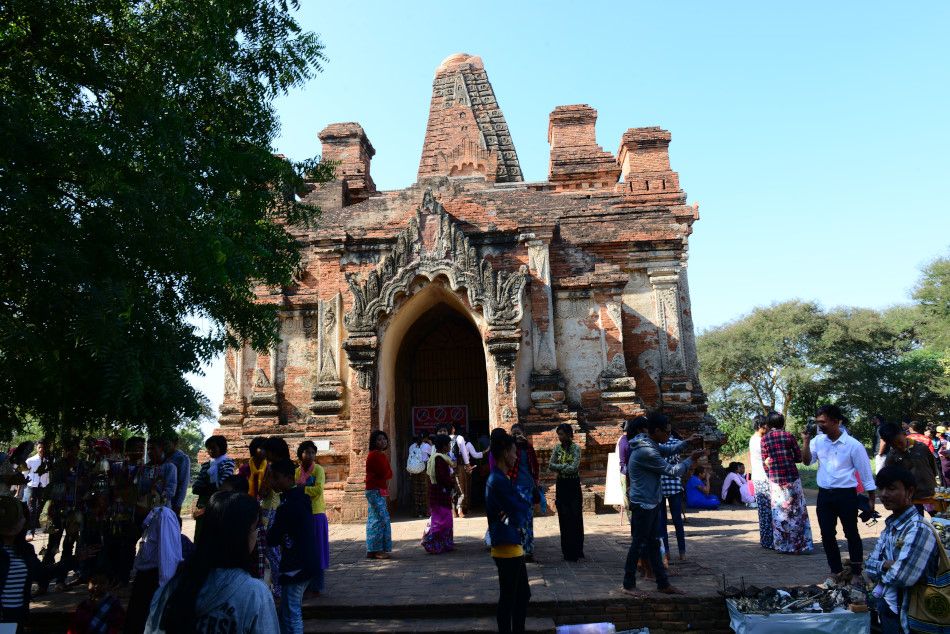 Built in the 13th century, the Htilominlo is about 46m tall.  The temple was damaged by earthquake in 1975.

Among all the tourist souvenirs on display at Htilominlo, local puppets seemed to be the most eye-catching.

Well known for its detailed plaster work, Htilominlo is a popular temple among the 2000+ pagodas in the area.  The sikhara at the top was under scaffolding during our visit.

There is one gilded Buddha figure at each of the four worship halls facing the four directions. 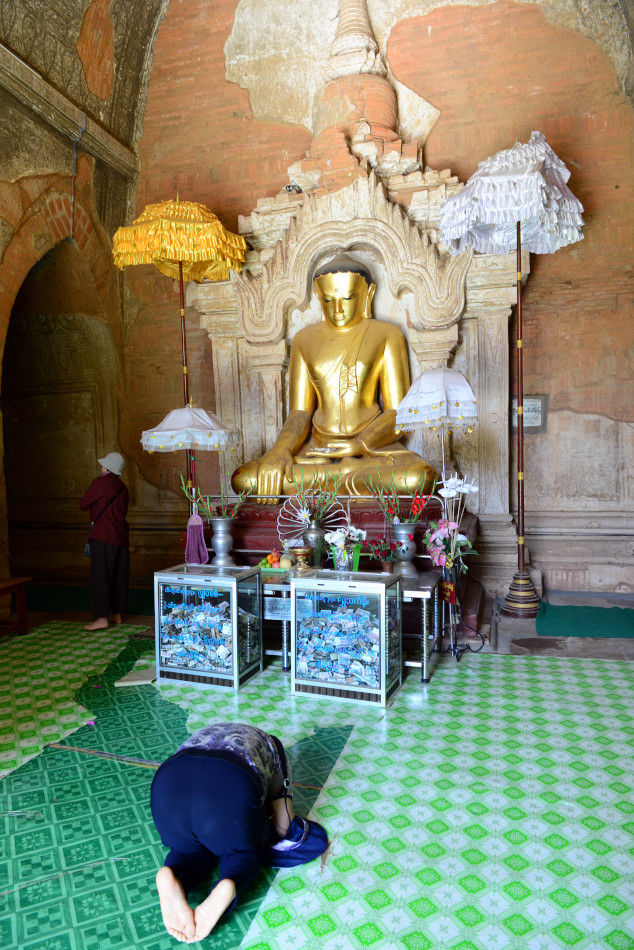 Each of the four Buddha figures is unique in appearance.  Pilgrims usually visit all of them for the worship. 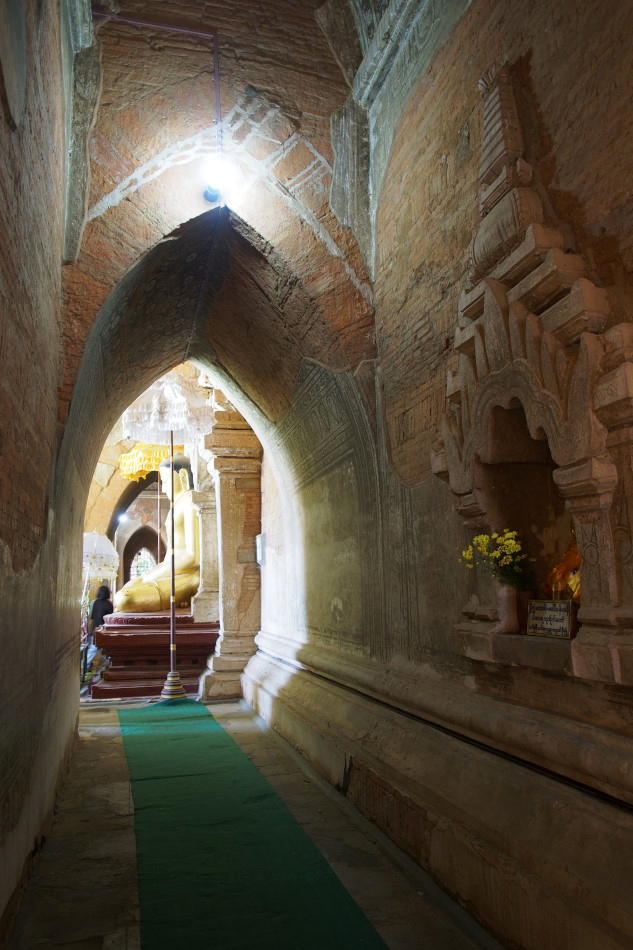 The four main worship halls are connected by vaulted corridors running around the core of the main structure.

The interior of the architecture is full of archways and vaulted corridors. 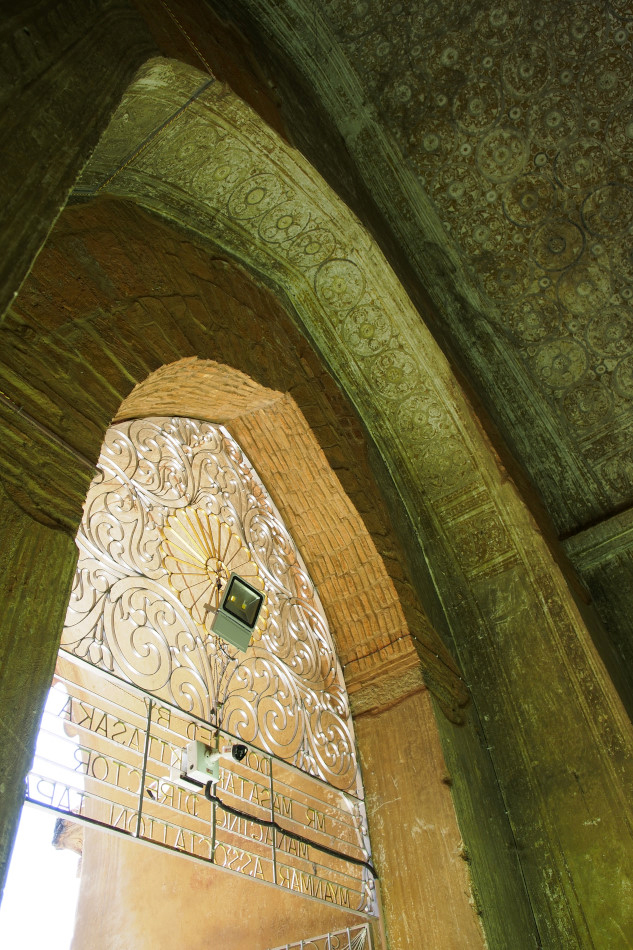 Some of the fading fresco can still be seen inside Htilominlo. 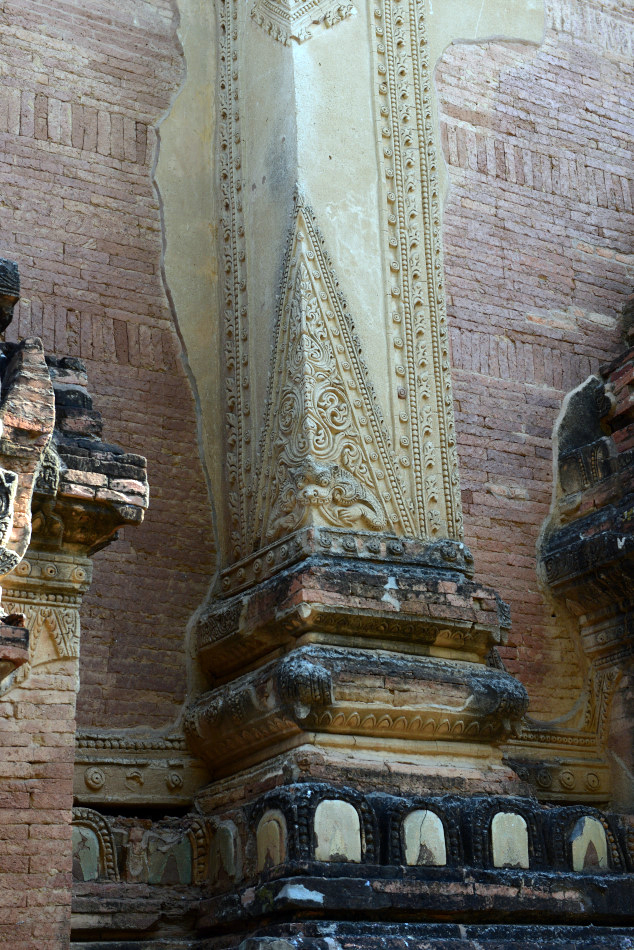 After an interior loop, we walked around the temple to check out its exterior decorations.  Some of the beautiful plaster work and glazed terracotta plaques were still visible. 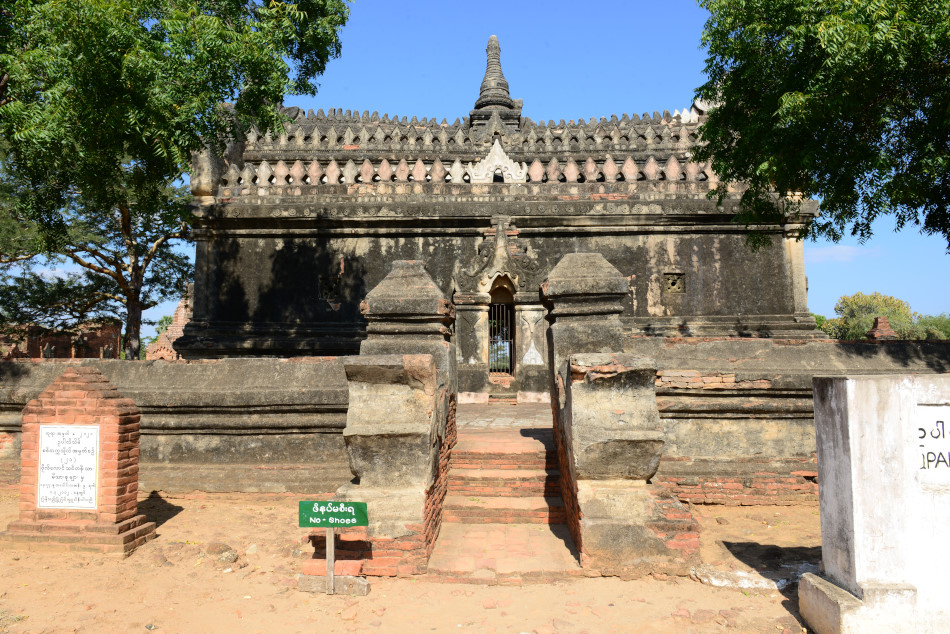 Across the road from Htilominlo, we reached a smaller building called Upali Thein.  Built in the 13th century, this building houses some fine frescoes from the 17th century.  The interesting roof battlements attempted to mimic a type of historical Burmese wooden architecture that can no longer be found today. 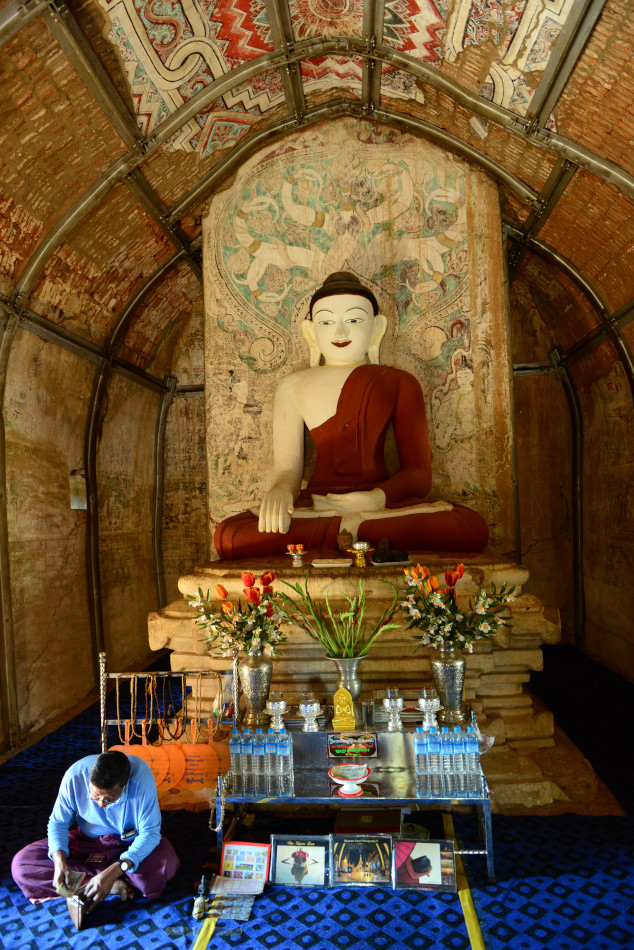 We were fortunate that the usually locked Upali Thein was open while we were there.

We wandered around a cluster of stupas nearby.  These stupas varied in size and form, and were constructed in different eras. 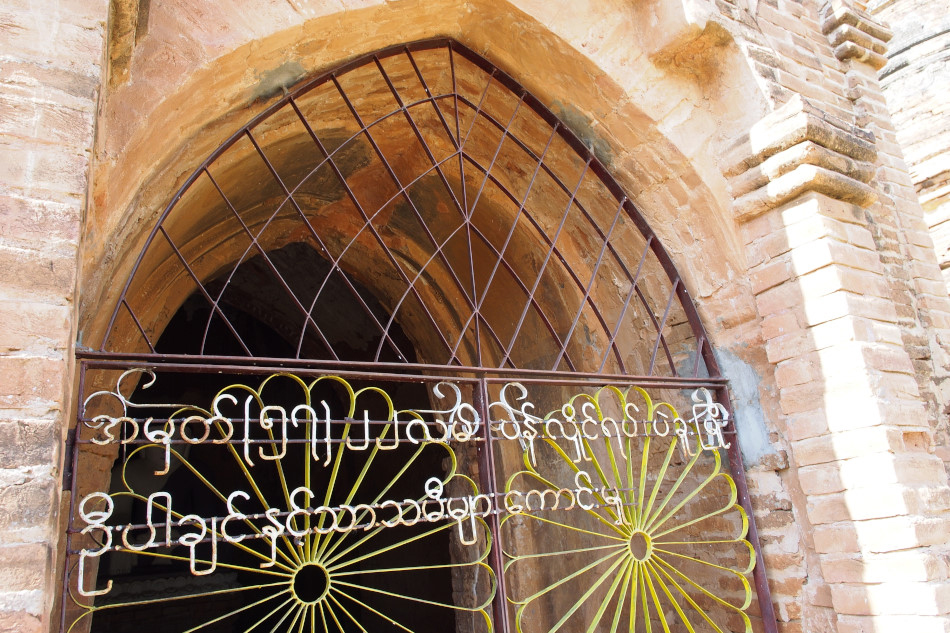 In the past, constructing stupas in Bagan was considered a religious good deed of the donor.  Stupa donors in Bagan ranged from businessmen to officials and even kings.  Names and addresses of the donor were often presented at the entrance gate. 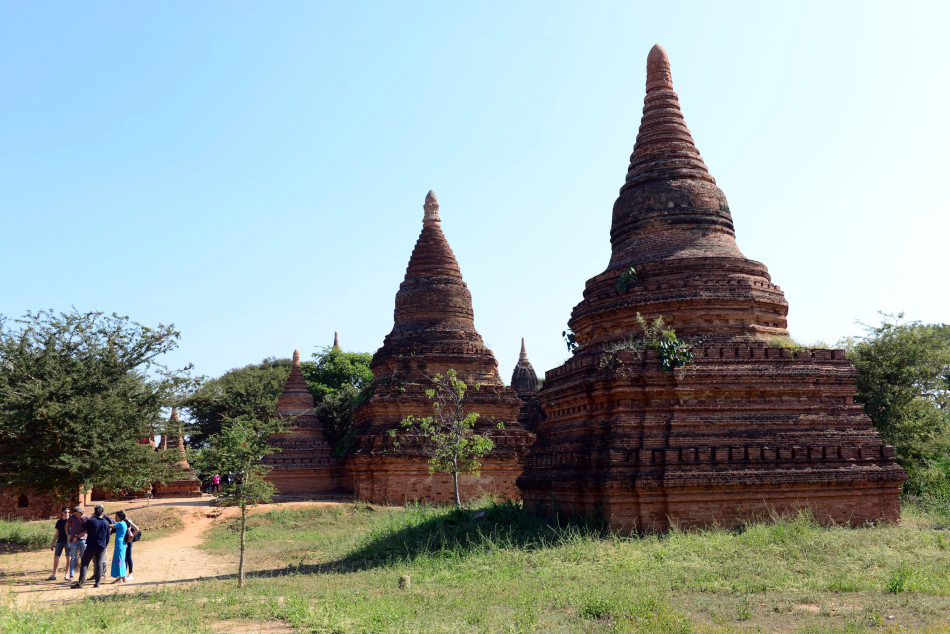 Constructing stupas was a competitive business in the old days among the wealthy class.

Today, most of the 2000+ surviving stupas and pagodas stand in partial ruins, except the most prominent ones that are still serving as places of worship for Buddhist pilgrims.

Centuries of competitive stupa constructions put Bagan at the top of the list of attractions for Myanmar. 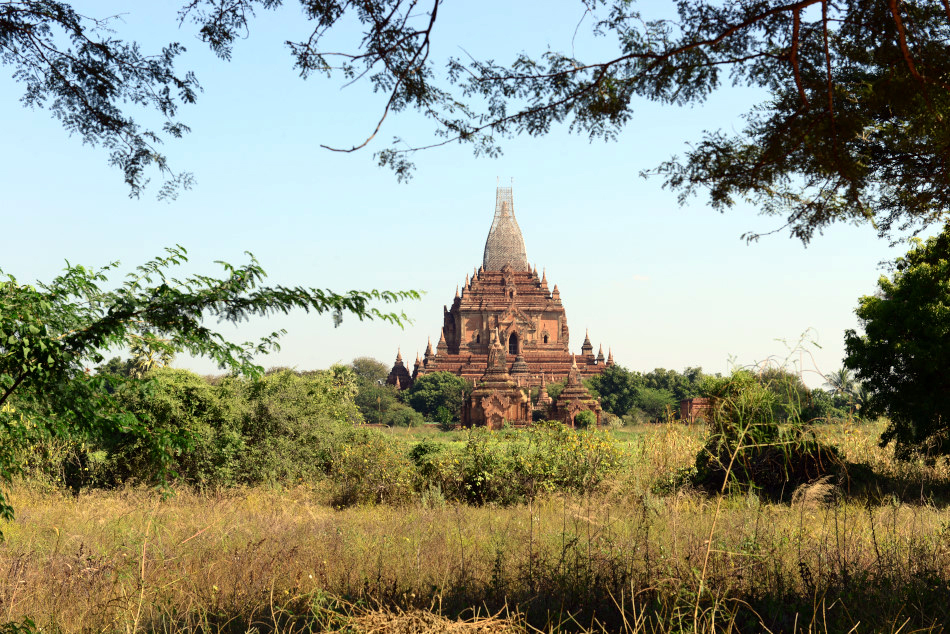 Looking back at Htilominlo from afar, we could truly sense that our two-day feast of temple and stupa hopping would be a really special experience.  Unlike Angkor in Cambodia where majestic temples are overtaken by the powerful rainforest, Bagan is a romantic landscape picture consisted of layers of pagodas scattered across the horizon.

For lunch, Win Thu took us to a local restaurant nearby. 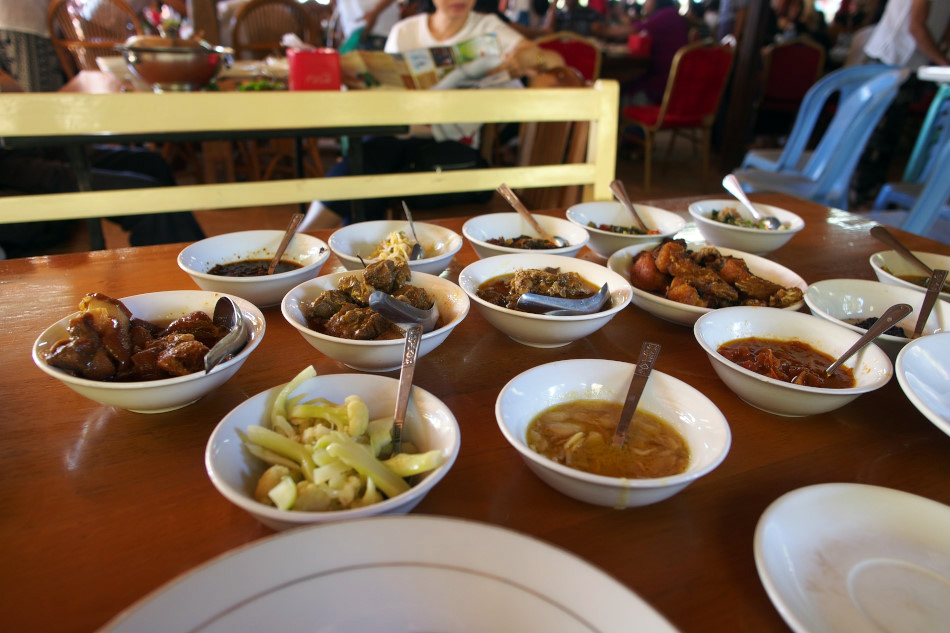 There was no menu as all customers were given the same dozen or so small plates of local dishes and a large plate of rice.

Housed in a simple shed, the restaurant kitchen was filled with the scent of charcoal.