After we put down our bags into the hotel room, we couldn’t wait but to venture out into the alleyways of Barkhor Old Town.  Soon we arrived at a security checkpoint where we needed to show our ID and put our bags through the x-ray.  A little further beyond the checkpoint was a much wider stone paved street where almost all pedestrians moved in one direction.  We knew we had arrived at the famous Barkhor Street (八廓街).  We were all sleepy from the red eye flight.  Angela got a bad headache from the high altitude.  We had no particular itinerary for the day.  We took our time to walk around the Barkhor Street, taking in the energy and Tibetan atmosphere of the ancient street, and dropping by the nearby Summit Cafe and Spinn Cafe for brief breaks.

Kora (སྐོར་ར) is the term for a pilgrimage circumambulation for Tibetan Buddhism around a sacred site or object in the clockwise direction.  In Lhasa, if not the entire Tibet, the most popular kora route is undoubtedly the Barkhor Street (八廓街), the pedestrian circuit around the Jokhang Monastery (大昭寺).  For over 1300 years the stone paved circuit was the most sacred pilgrim route for Tibetan Buddhists.  Tibetan King Songtsen Gampo erected the Jokhang Monastery in 647, and the pilgrim path around the temple soon followed and had since then evolved into Barkhor Street.  On the hand-polished stone pavers, uncounted pilgrims stepped on the Barkhor everyday, some would even perform prostration while moving clockwise along the Barkhor.  Apart from prostrating, some pilgrims also spin their prayer wheels, chant mantra, or count their rosary beads.

Nowadays, other than its spiritual identity, Barkhor Street has also become a prime tourist destination of Lhasa.  Souvenir shops have lined up along both sides of the famous street.   For tourists, following the local pilgrims to stroll along Barkhor Street is compulsory.  Beyond souvenir stores and gemstone shops, visitors may find religious shops selling all kinds of items for the pilgrims.  For us, the Barkhor Street was the place that we walked by several times each day during our stay in Lhasa.

The route from our hotel opens to the Barkhor Street at the south side of the Jokhang Monastery, near a colourful flag post.

Many locals were dressed in traditional clothing while walking the kora on the Barkhor.

A turn near the colourful flag post led us to the square in front of Jokhang Monastery, where a group of pilgrims and tourists congregated.

At the Jokhang Square, local pilgrims passed by another colourful flag post.

There were constantly pilgrims prostrating in front of the Jokhang Monastery. 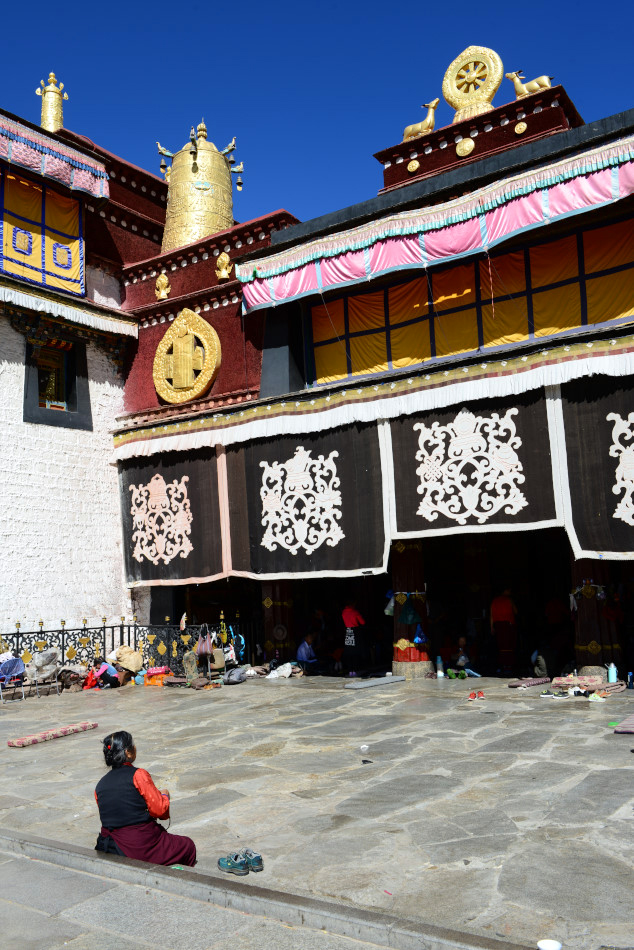 Visitors can no longer get in the original main entrance of Jokhang Monastery.

The original main entrance of Jokhang Monastery has become a small plaza for prostrating pilgrims and spectating tourists.

Going north from the Jokhang Square, the Barkhor Street gets narrow again into a retail street. 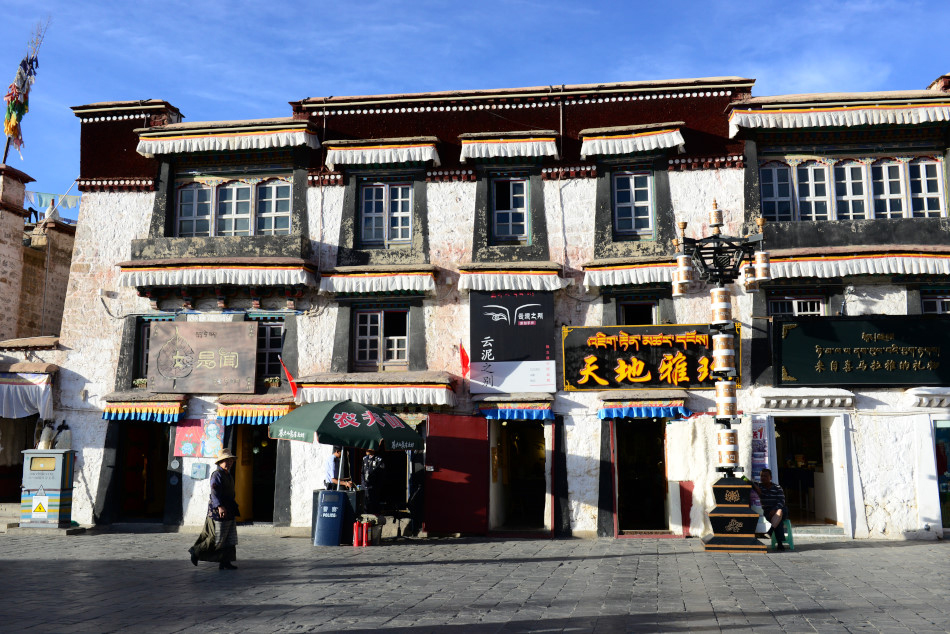 The Barkhor Street is flanked both sides by traditional Tibetan houses.

Along the Barkhor, there are quite a number of benches and seating areas for the pilgrims. 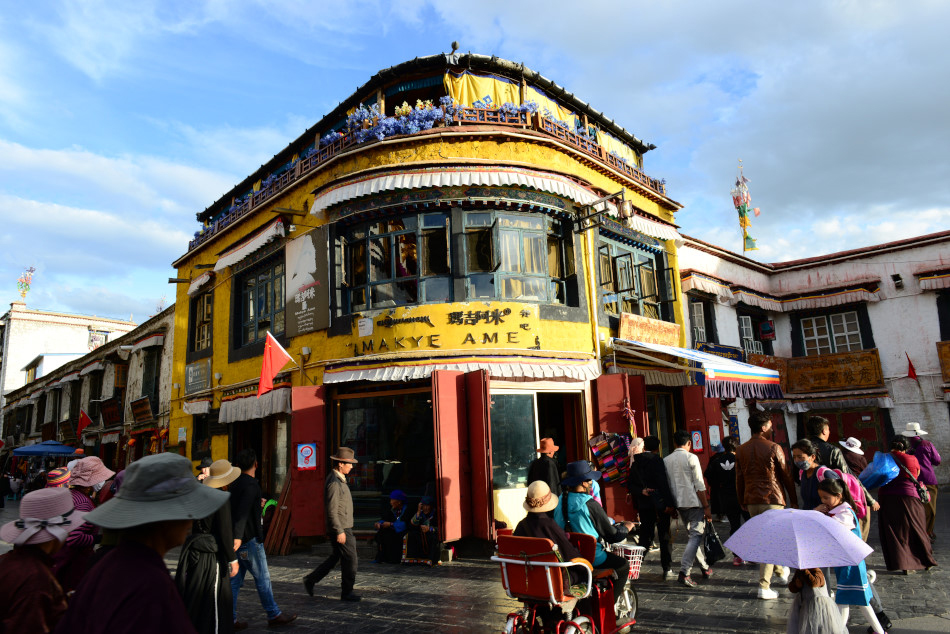 Makye Ame is a famous restaurant bar at the southeast corner of the Barkhor.  Legend has it that Tsangyang Gyatso, the 6th Dalai Lama, met the girl he loved at this bar in the 17th century.

There are also hidden courtyards behind the traditional Tibetan houses on the Barkhor, where young artists and artisans gather to promote a new generation of Tibetan culture, as well as cool cafes and interesting bookstores targeted at the local youngsters.

Late afternoon is a popular time to walk the Barkhor, when the fierce highland sun becomes a more bearable.

Apart from Jokhang Monastery, there are a number of historical buildings at Barkhor, including this former office of the Qing government representatives. 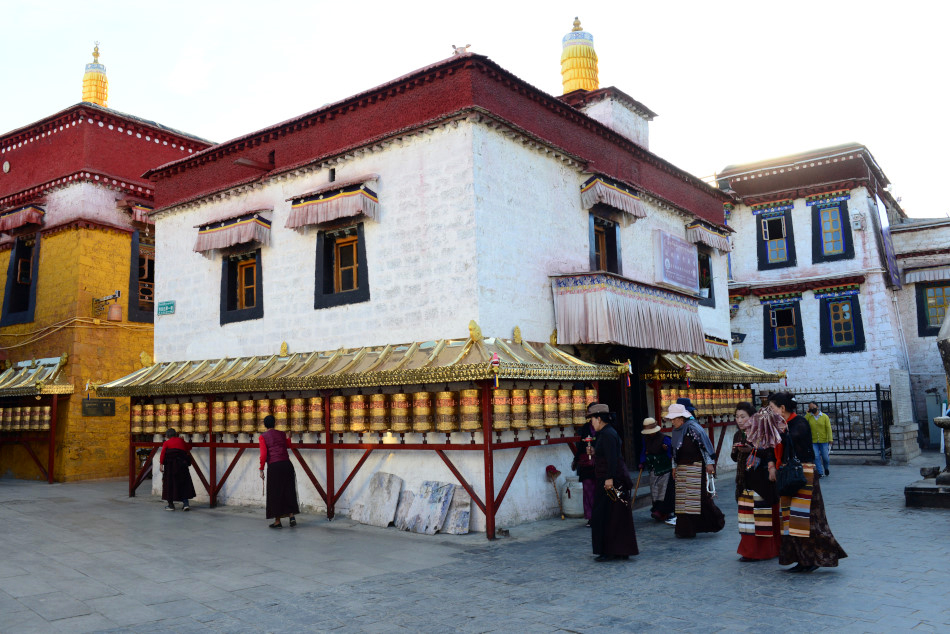 Smaller in scale than the famous monasteries, local Buddhist temples such as this one on the Barkhor Street is equally interesting with vibrant worshiping scenes. 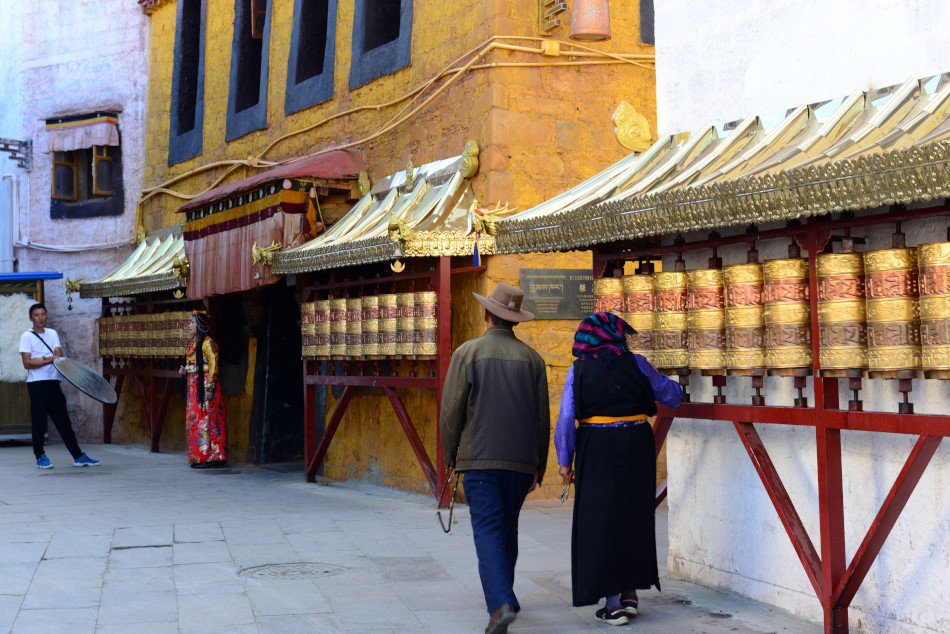 Both pilgrims and tourists love to interact with the Buddhist prayer wheels. 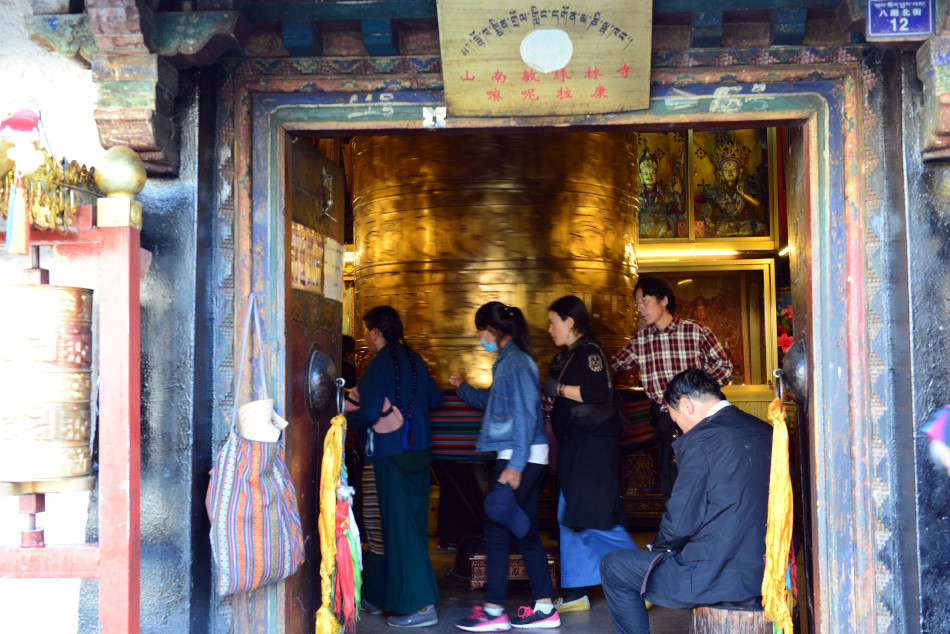 Inside the small temple there is a much bigger prayer wheel where pilgrims move clockwise with the turning wheel inside.

Police has a strong presence at Barkhor Street, with security stations set up at certain spots. 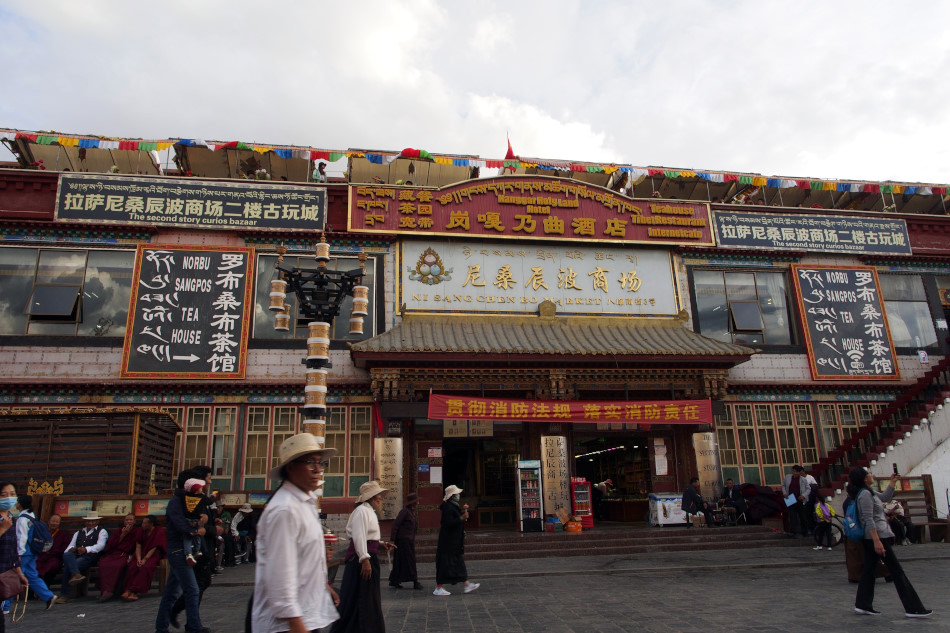 Tea shops and shopping centre of gemstone shops dotted around the Barkhor Street.

Before sunset, Barkhor Street can get pretty crowded with pilgrims and tourists. 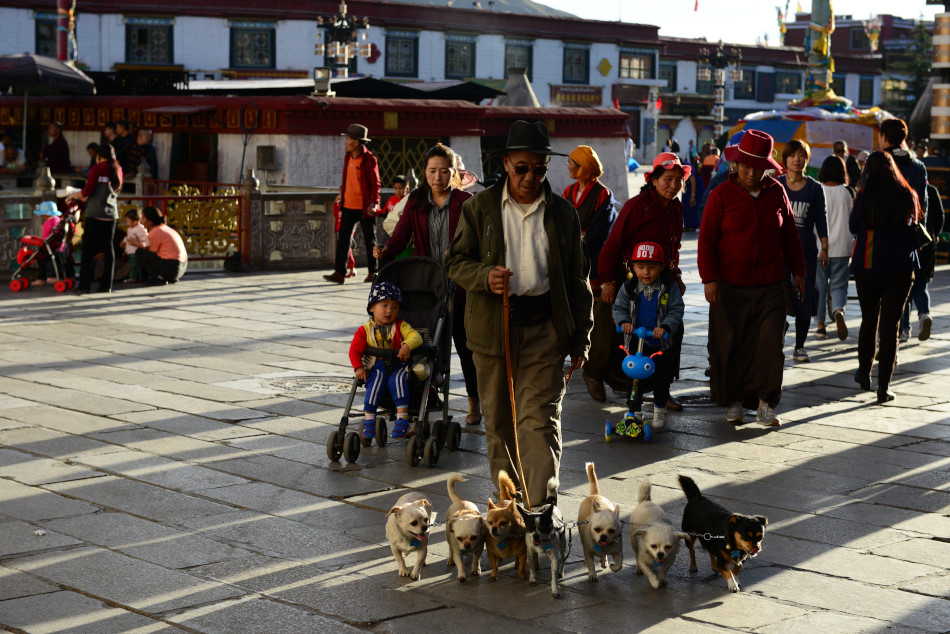 Among all the pilgrims and tourists that we had seen on the Barkhor Street, probably this old man and his seven dogs had captured the most attention.