Hong Kong has its charm as a vibrant metropolis and financial hub in the Far East, but it also has its issues of insanely expensive housing and tremendous gap between the rich and poor.  New immigrants, elderly and young people living in bunkers about the size of coffins (known as “coffin homes”) have made the headlines in recent years while at the same time government’s land sales and housing prices have skyrocketed to record levels.   Because of its concentration of inexpensive tiny bunkers and decades-old apartments, Sham Shui Po (深水埗), an old neighborhood in West Kowloon, has often been associated with issues of poverty and urban decay.

With its vibrant street markets selling everything from cheap electronics, second hand appliances, clothing, toys, and a wide range of DIY parts, from buttons and fabrics, to cables and motors, Sham Shui Po seems like one huge flea market.  Beyond the chaotic appearance, however, visitors may find a special nostalgic charm in this neighborhood, with traces of the beautiful old Hong Kong that have been mercilessly replaced by cold and glassy highrises, luxurious malls, and uninspiring chain-stores throughout the city.  A walk in Sham Shui Po is a diverse journey full of chaotic street markets, affordable and unpretentious food, lovely heritage buildings and much more. 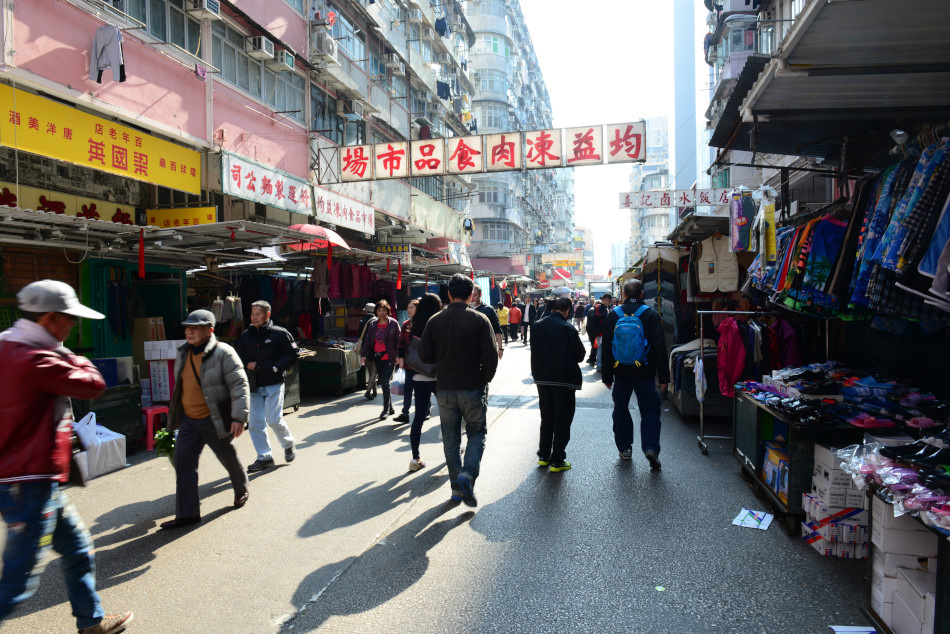 Compared with many upscale residential neighbourhoods and the city’s commercial heart, the streets of the relatively less affluent Sham Shui Po are much more human and pedestrian oriented.

Sham Shui Po still has a variety of traditional businesses from Old Hong Kong, such as a high concentration of pawnshops.

Some old apartment flats in the area have been converted to subdivided rental bunkers.  The worst type is called “coffin homes” due to their tiny size similar to real coffins. 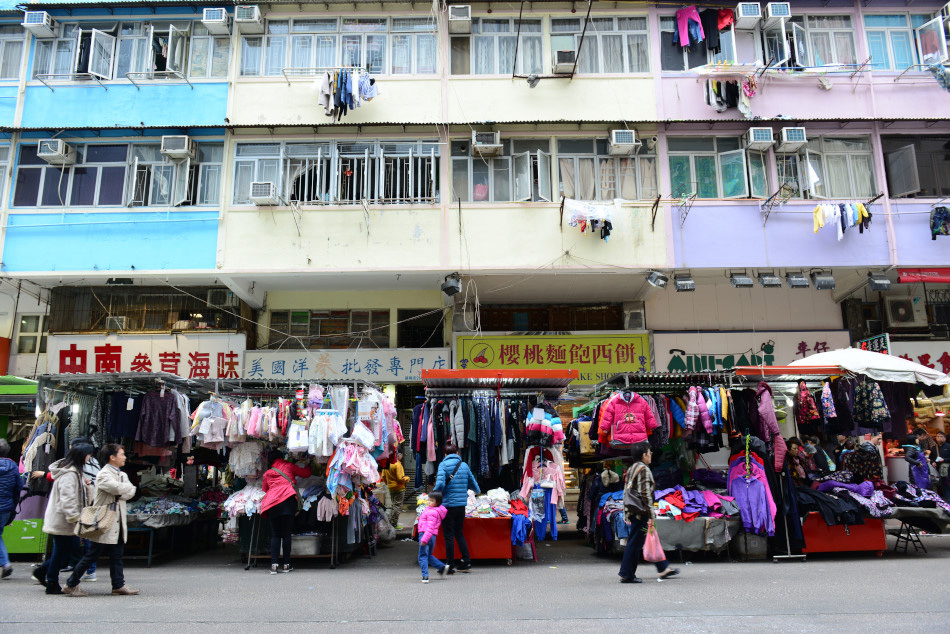 Quite a number of streets in Sham Shui Po are famous for street markets. Catering for different clientele, each market zone is more or less designated for a distinct type of merchandises. 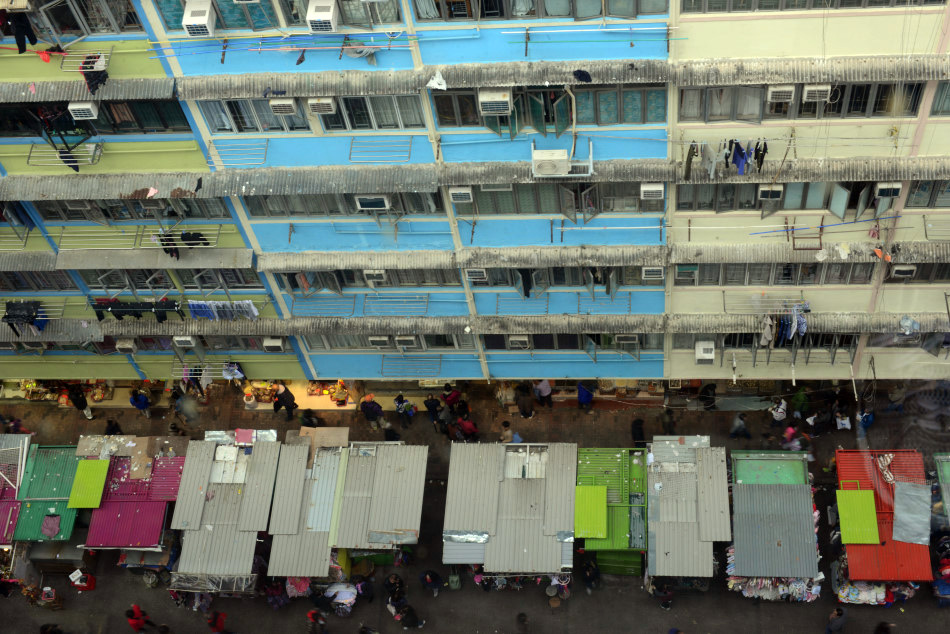 Looking from above, the streets of Sham Shui Po seem like an abstract painting composed of rows of colour swatches. 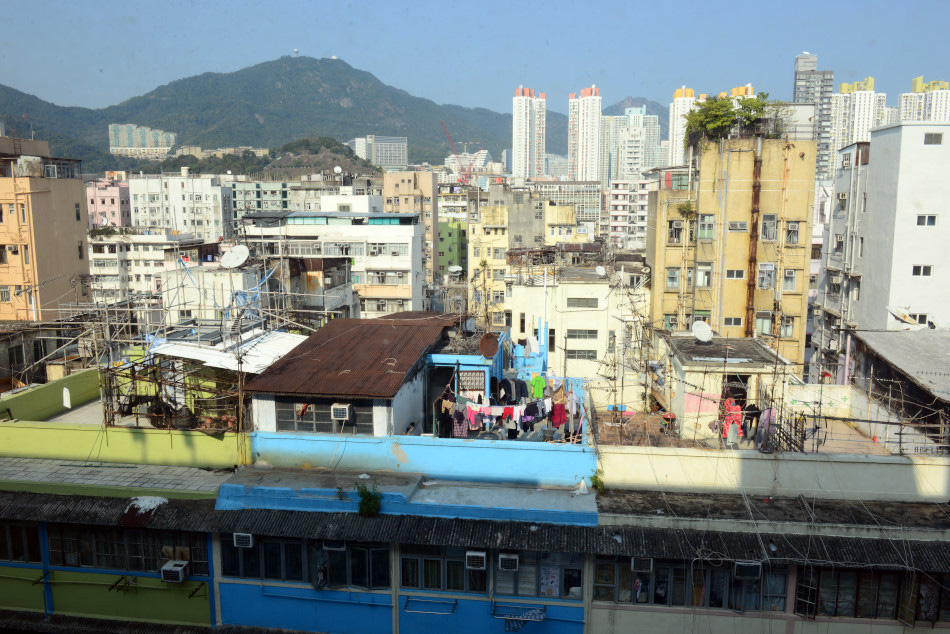 While the streets are vibrant and chaotic, the rooftop level seems like a totally different world.

Ki Lung Street (基隆街) is popular with customers looking for DIY supplies for clothing, including fabrics, buttons, ribbons, trims, zippers, you name it.

Nicknamed Street of Beads, Yu Chau Street (汝州街) is another street in the area famous for DIY clothing accessories. 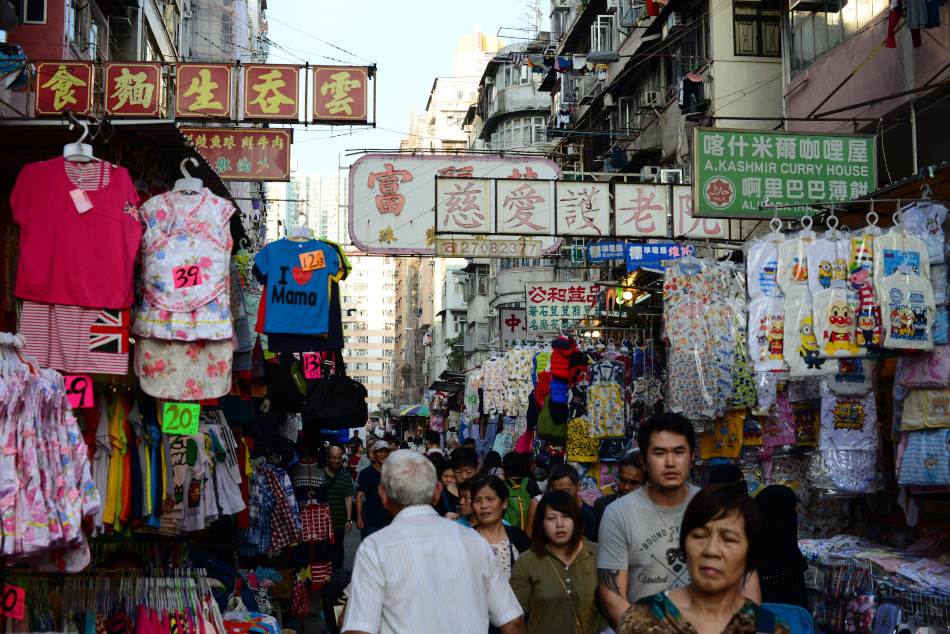 Known as the miniature of Sham Shui Po, Pei Ho Street (北河街) is a market street famed for its fine clothing in really affordable prices. 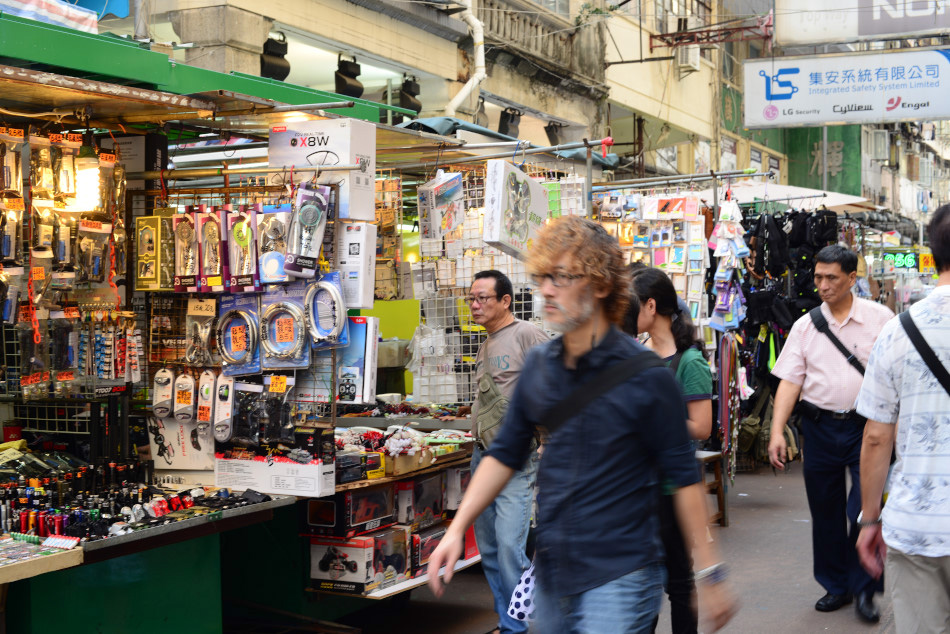 There are many stalls at Apliu Street (鴨寮街) specialized in electronic repair.

Other than shopping, food lovers also have their reasons to visit Sham Shui Po for some of its more small, traditional and down-to-earth eateries that are disappearing fast in other areas of the city.  Sun Heung Yeung (新香園 (堅記)) on Kweilin Street (桂林街) is one of the most popular Hong Kong style cafe in Sham Shui Po, famous for its beef and egg sandwiches. 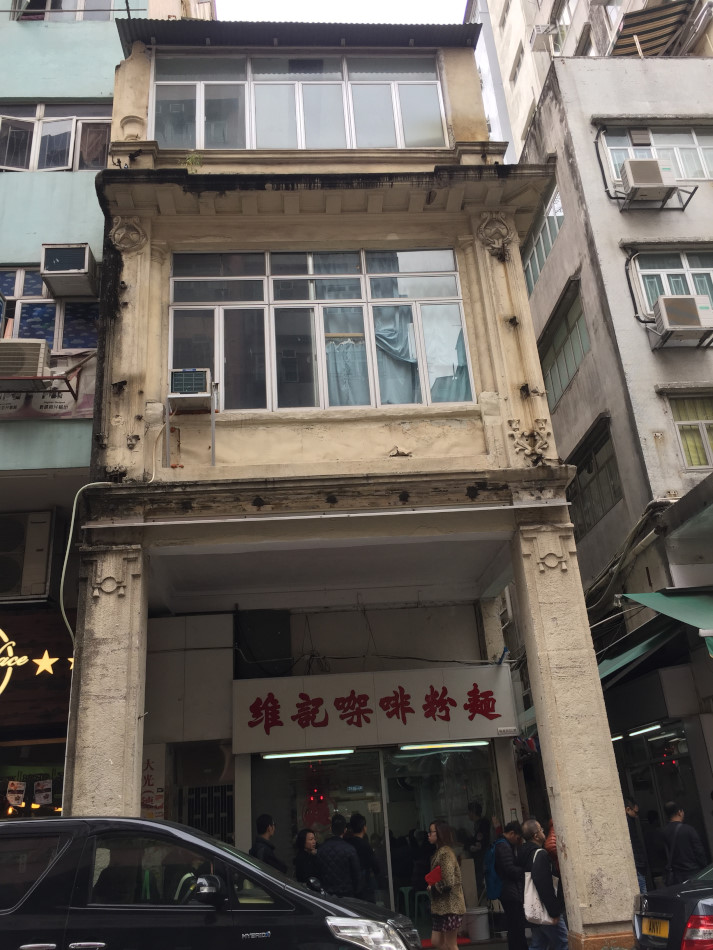 Kung Wo Dou Bun Chong (公和荳品廠) or Kung Wo Soybean Product Factory is another major attraction for food lovers.

With over a century of experience, Kung Wo Dou Bun Chong (公和荳品廠) sell all kinds of bean curd or tofu products. 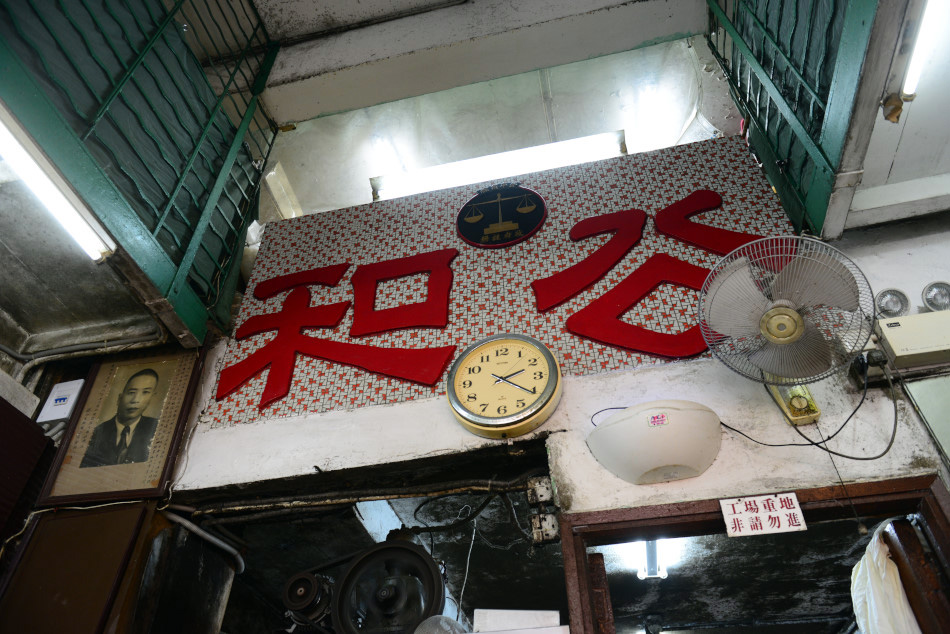 Even the interior of Kung Wo Dou Bun Chong (公和荳品廠) is full of nostalgic ambience. 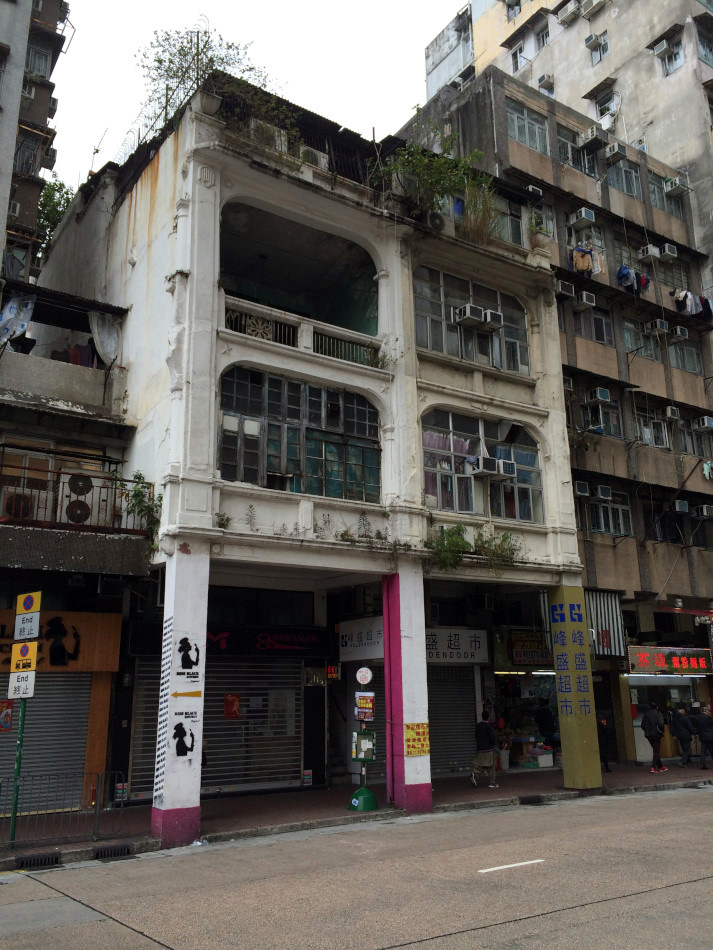 Sham Shui Po still has a considerable amount of tong lau (唐樓) or old tenement buildings with a covered colonnade on street level.  The ground floor was usually occupied by a small shop, such as a pawnshop or food vendor.  This type of architecture once dominated much of Hong Kong before 1960’s. 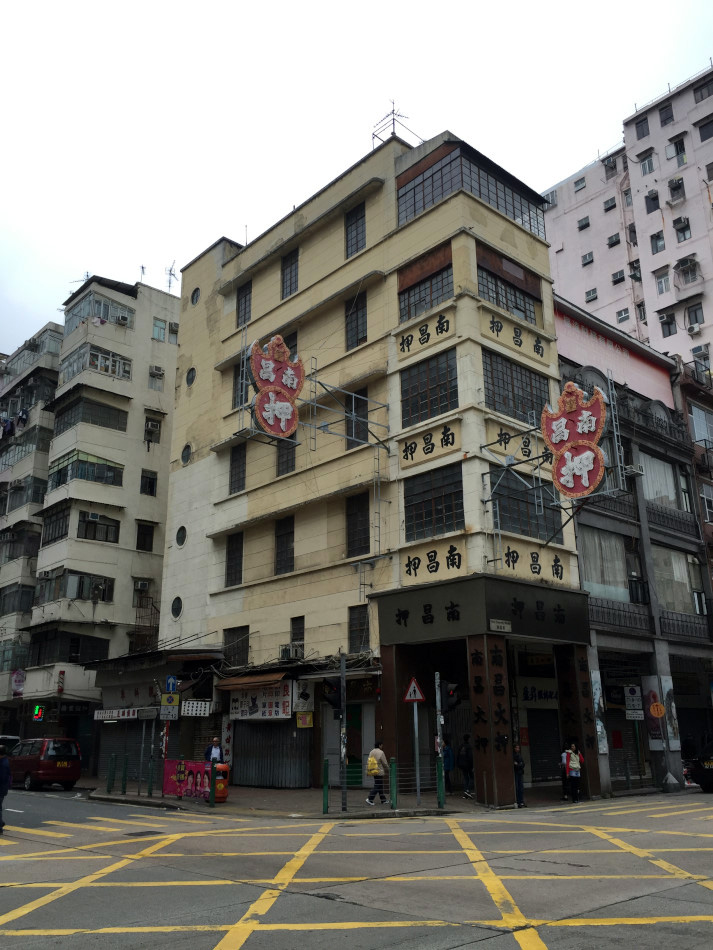 The 5-storey Nam Cheong Pawn Shop at 117-125 Nam Cheong Street was built in the 1920’s.  Even the iconic cantilevered pawnshop signage have becoming rarer nowadays. 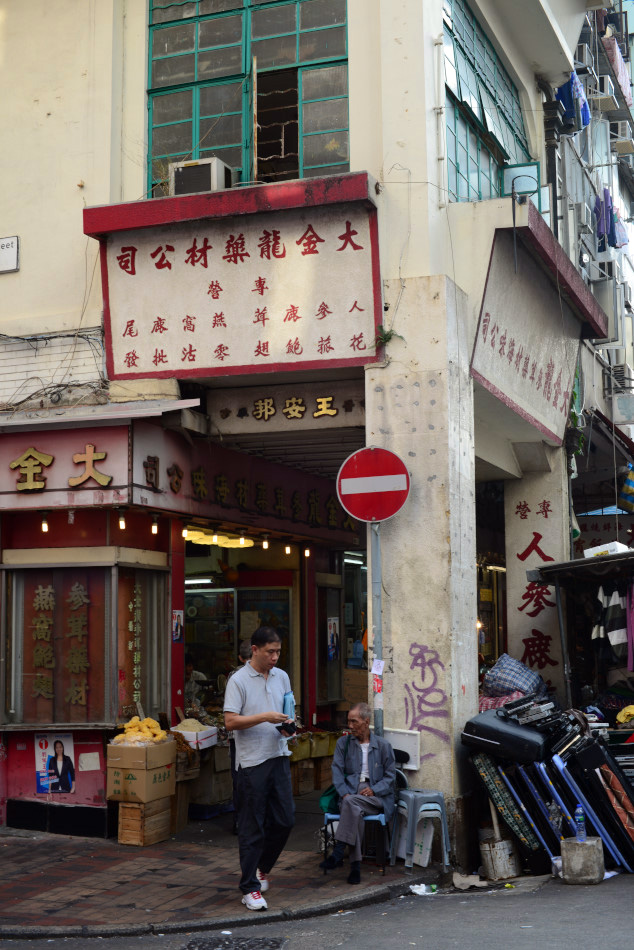 58 Pei Ho Street is probably one of the most famous heritage buildings in the area.  Built in 1920’s and served as a pawnshop until the 1970’s, it was then converted into a shop selling dried seafood until present days.

The curved balcony of 58 Pei Ho Street is quite unique.  The amazing feature window a level above the street is such a lovely design gesture back in the old days when there was less vehicular traffic.

Built in the 1940s, Hang Jing Pawnshop is no longer in business.  The colonnaded area is now used as an outdoor workshop of a nearby shop.  On the columns, beautiful calligraphy of the former pawnshop is still visible. 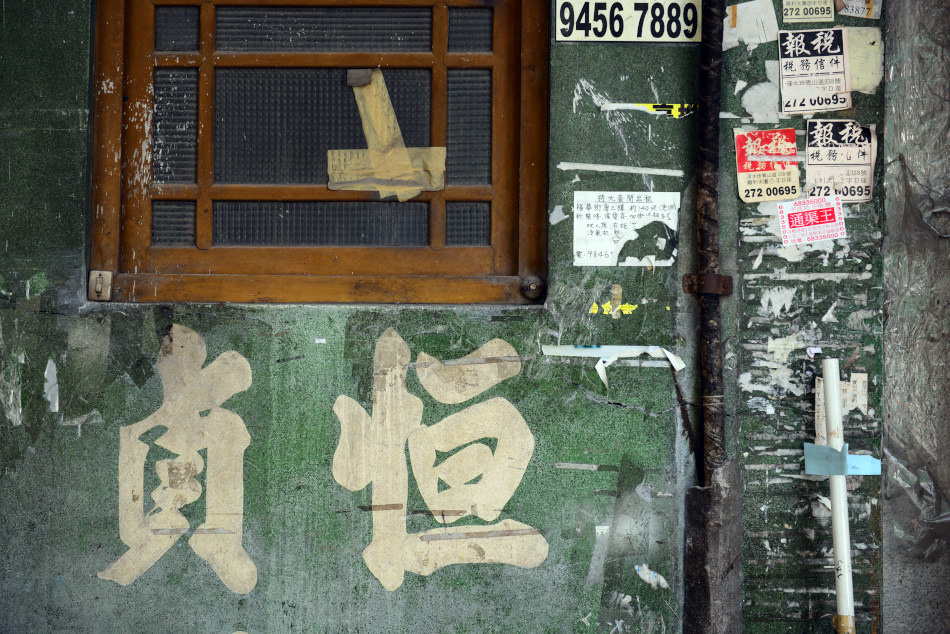 On the concrete wall of Hang Jing Pawnshop, the old calligraphy set in the plaster represents a bygone era