In the middle of the 5th century, Buddhist Master Pui To (杯渡禪師) from India arrived in Tuen Mun, where at that time was a military outpost where foreigners were required to go through immigration customs.  Legend has it that Pui To traveled in a “wooden cup” across the sea, and therefore was named “Pui To”, which literally means “cup sailing”.  Pui To decided to stay in Tuen Mun to host religious ceremonies and teaching sessions for the stationed soldiers.  He settled on the mountain above the military station and practiced meditation regularly in a cave.  His name was widespread across the region, and his residing place (a grotto and hut) soon became a place for pilgrimage.  In the next 1500 years, this pilgrimage site had been considered as the origin of Buddhism in Hong Kong.  In 1829, the To clan built a Taoist institution known as Tsing Wan Kwun (青雲觀) just adjacent to the pilgrim site of Pui To.  In the 1910s, Chan Chun-ting bought the adjacent land to redevelop Tsing Wan Kwun.  His plan made a big twist in 1918 when Chan was converted to Buddhism.  Instead of a Taoist temple, Chan developed the Tsing Shan Monastery (青山禪院), which encompassed Buddhist halls, Pui To’s grotto, as well as the Taoist Tsing Wan Kwun.  The monastery and Taoist temple fell into legal dispute after Chan Chun-ting died in 1932.  In 1998, the case for Tsing Shan Monastery concluded at the High Court.  The court ruled that the Monastery would become a public institution managed by a charity trust.

We arrived in Tuen Mun by bus No. 962 all the way from Causeway Bay.  It was a grey day and it seemed that rain patch might come in any minute.  In the first glance, Tuen Mun New Town appeared like another uninspiring satellite town built in the 1970s by the British government to resolve the housing issue of Hong Kong.  Adjacent to the new town, the lush green Castle Hill (青山) was partly hidden in the mist.  We came to visit what claimed to be the oldest temple in Hong Kong.  From Tsing Shan Village, the winding Tsing Shan Monastery Path was a decent uphill walk to the monastery. 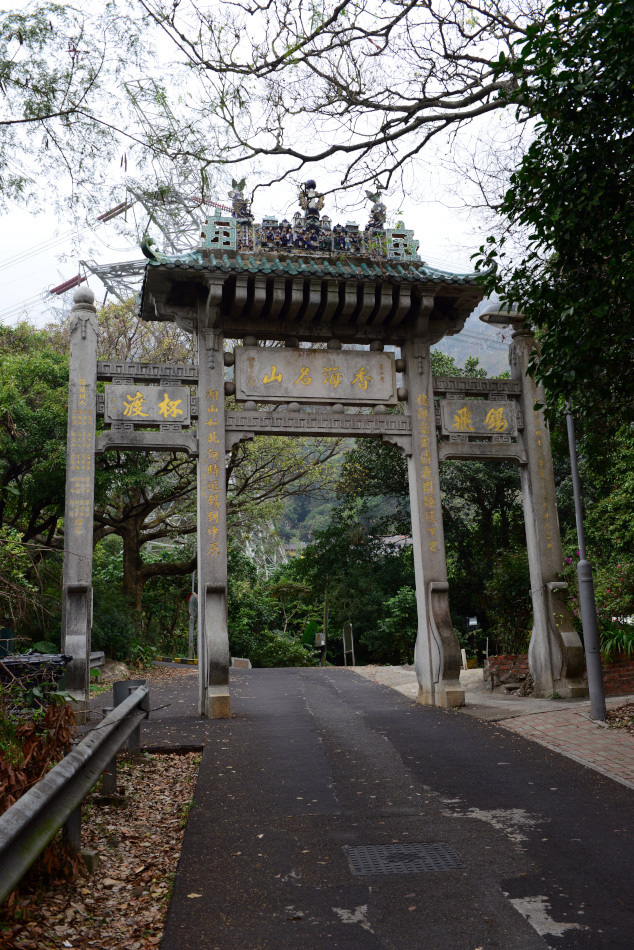 With relaxed hearts, we slowly climbed the Tsing Shan Monastery Path to the famous Pailou (牌坊).  On the Pailou, the calligraphic inscription 香海名山 or “Fragrant Sea and Prestigious Mountain” was written by Hong Kong Governor Sir Cecil Clementi (金文泰) in 1929.  Clementi was a British administrator who possessed deep knowledge of Chinese culture, fluent in Cantonese and mastered the skills of Chinese calligraphy.

The front gate (山門) of Tsing Shan Monastery was renewed in 2009 into the current appearance.

The first thing that caught our attention was a portrait of Maitreya (彌勒佛) displayed on the wall of the Guardian Pavilion (護法殿).

To the right of the Guardian Pavilion (護法殿) stood the Tsing Wan Kun (青雲觀).  The original heritage building was the oldest structure in the entire Tsing Shan Monastery.  Against advise of conservationists, the old structure was controversially demolished in 2004 by the To family, the owner of the monastery.  A new building in style of the Tang Dynasty was erected in its place. 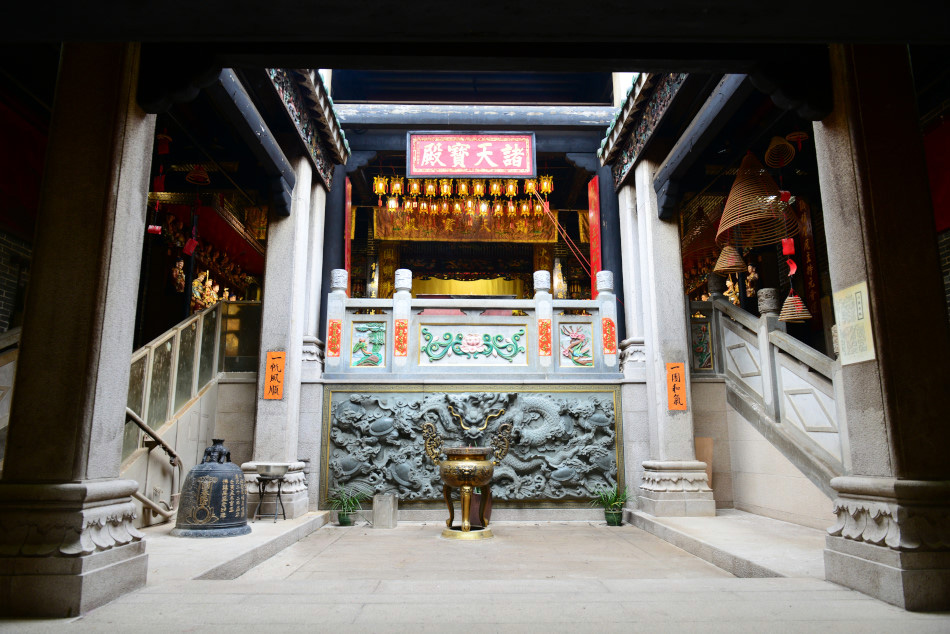 Despite the relatively new building, there were still a number of historical items inside the Tsing Wan Kun, such as the bronze bell in the courtyard. 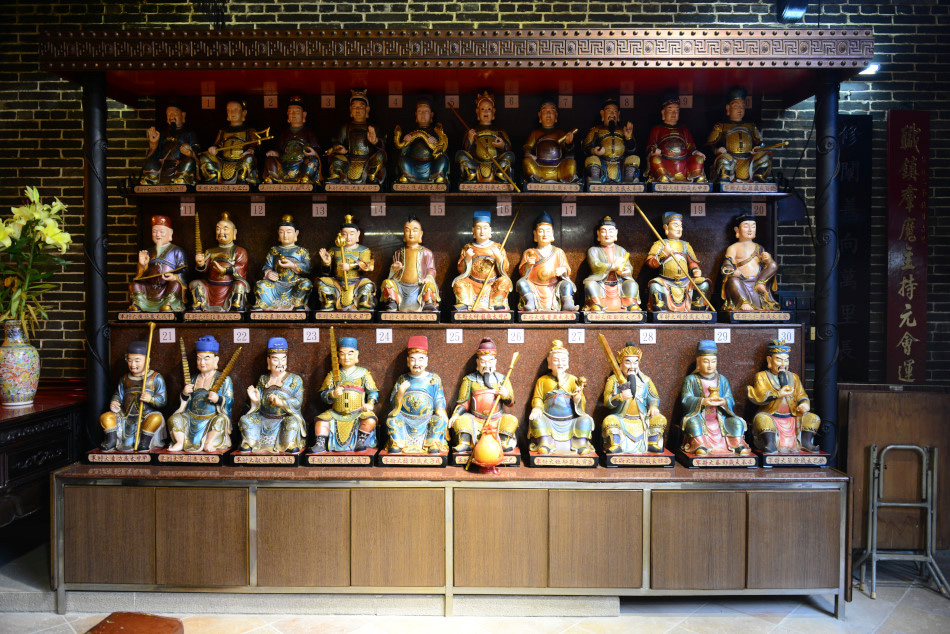 Inside the Taoist Tsing Wan Kun, there were quite a variety of deities for worship, such as the 60 Tai Sui deities (太歲), a group of deities created from the orbiting stars directly opposite to the Jupiter in Chinese astrology.  Worshipers would come each year to pay respect to a specific Tai Sui deity according to his or her birth year.  Other than the Tai Sui, the central altar was dedicated to Doumu (斗母), the mother deity of the Big Dipper.

Other deities could be found in the upper chamber of Tsing Wan Kun.  Like many Taoist temples, Tsing Wan Kun houses a variety of traditional deities. 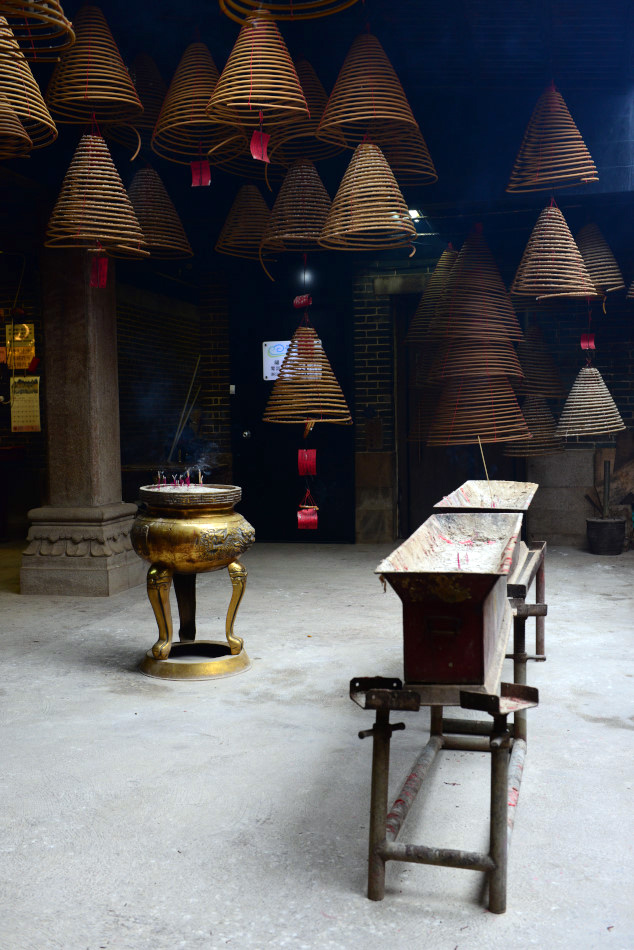 The atmospheric inner hall of Tsing Wan Kun was filled with suspended incenses. 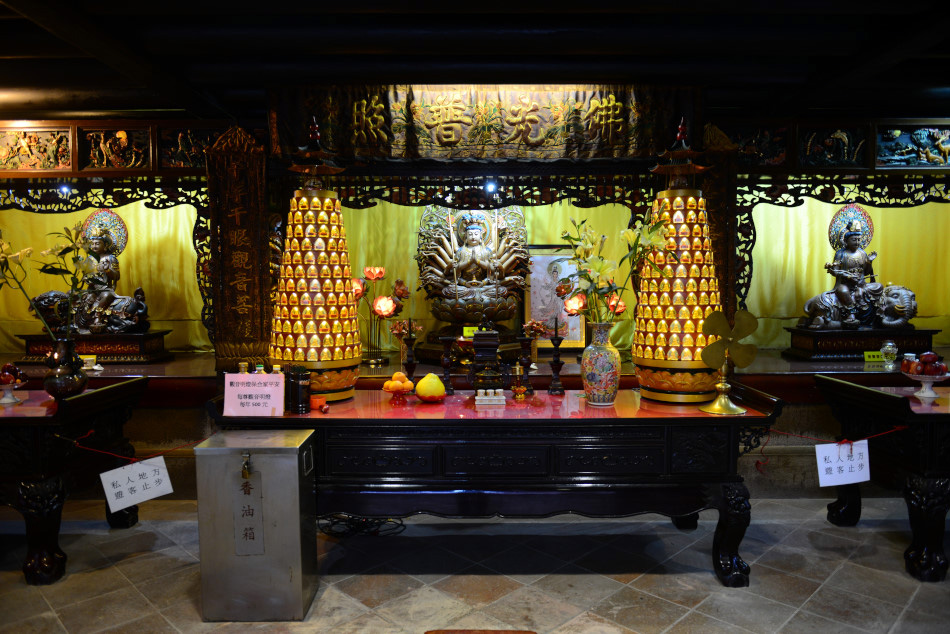 Buddhist figures like the Guanyin was present in the inner hall of Tsing Wan Kun.  Most believe that the Chinese Guanyin originated from Bodhisattva Avalokitesvara. 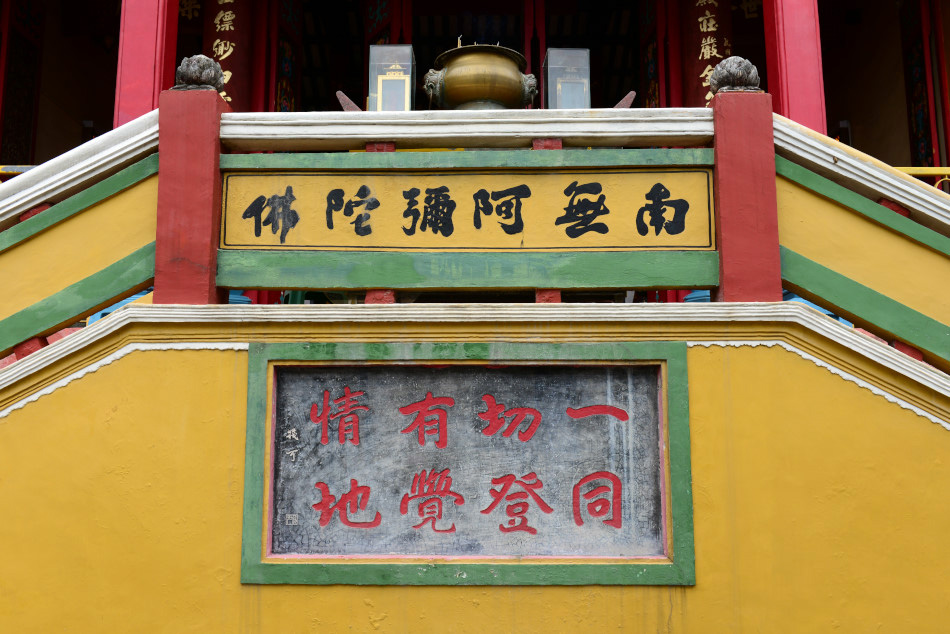 Back to the entrance courtyard of Tsing Shan Monastery, we followed the path to the back of the Guardian Pavilion and arrived at the Grand Hall (大雄寶殿).  Eight characters were inscribed on the front wall, “Everything on Earth Has Ties and Reaches Nirvana Together” (一切有情、同登覺地).

The Grand Hall (大雄寶殿) was dominated by the altar of three Buddha statues.

On the side walls of the Grand Hall (大雄寶殿), there were a series of tiny niches each with a bodhisattva figure lit up from above, many were marked with a donor’s name.

Outside of the Grand Hall, we could clearly see the interesting roof detail of Guardian Pavilion (護法殿) 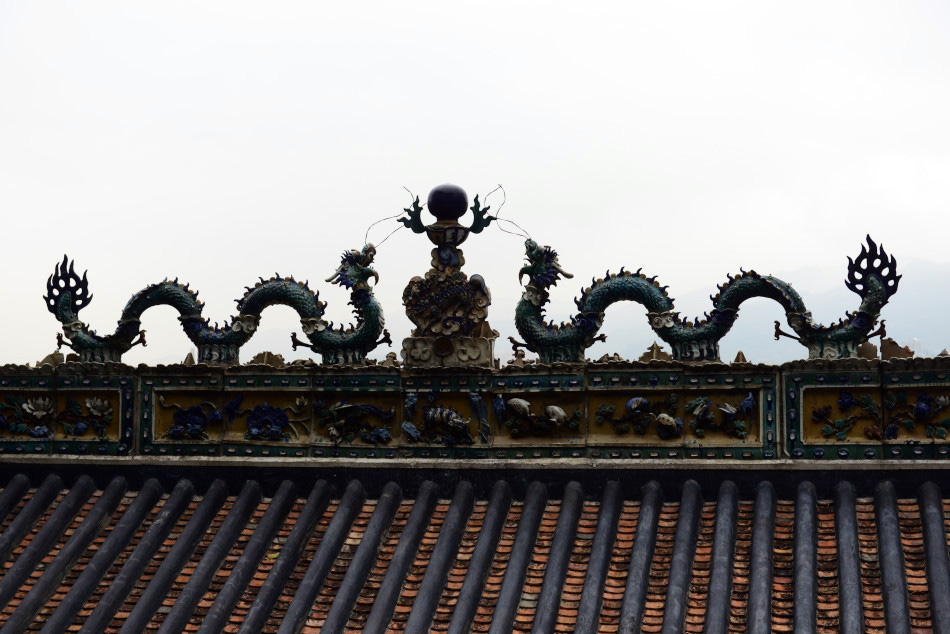 And a ceramic lion at the side hip of the roof.

On the upper part of Tsing Shan Monastery we reached a open platform overlooking town centre of Tuen Mun below.

One of the highlight of the monastery’s upper platform was the shrine at what believed to the the grotto where Master Pui To (杯渡禪師) meditated.

Near the grotto, there was a offering table and a wall of plaques with donor’s names.

Near the grotto, a small stair led us up to another platform where a three-tier Buddhist stupa (時輪金剛佛塔) stood.

Further up the hill stood the ruins of the old Abbot’s Chamber (方丈室). 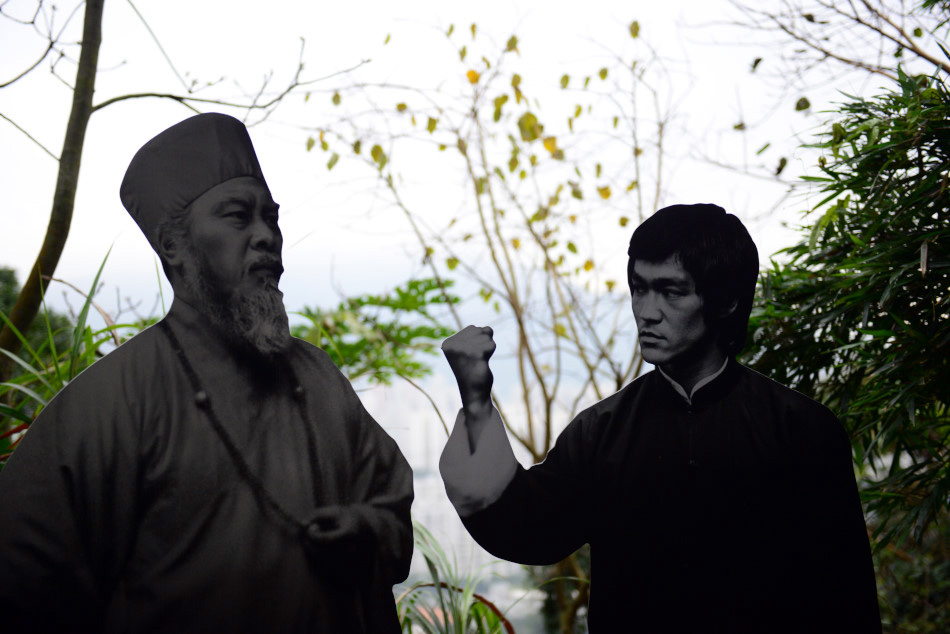 As we turned away from the ruined Abbot’s Chamber, we spotted the profile of two people standing at a lookout.  Soon we found out they were actually life size paper cut of passed actors Bruce Lee (李小龍) and Roy Chiao (喬宏).  In 1973, Lee, Chiao and their crew members came to Tsing Shan Monastery to film a scene of “Enter the Dragon” (龍爭虎鬥).

Back down to the level of the grotto, we passed by a garden and the Gate of Harmony (和合山門).  On both sides of the gate, the inscriptions stated that “No sweeping is needed for pure land.  No closing is needed for empty doors” (淨土何須掃,空門不用關).   At the end of the garden stood a yellow pailou.  It was part of the original Hall of Scriptures (藏經閣). 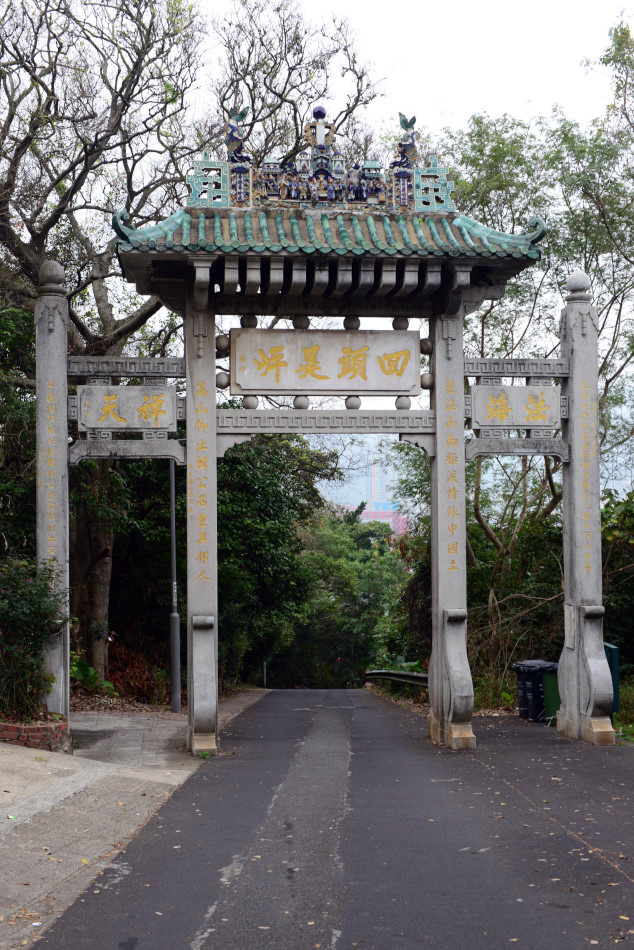 After a decent stroll of the monastery ground, it was time for us to head back downhill.  We passed by the Entrance Pailou once again.  Instead of “Fragrant Sea and Prestigious Mountain” ( 香海名山) at the front of the pailou, this time the back of the Pailou read as “Repentance is Salvation” (回頭是岸).

After the descend, we soon reached a large public square and the historical Hau Kok Tin Hau Temple (后角天后廟 ).  Tin Hau was the deity that former fishermen of Tuen Mun prayed for a peaceful return from the sea.

In the public square, a large bamboo pavilion was erected, probably as a stage and performance theatre for traditional Chinese operas.

We walked southwards along the Tuen Mun River Channel.

Since 1970s, Tuen Mun new town has been developed into a city with close to half a million of population. 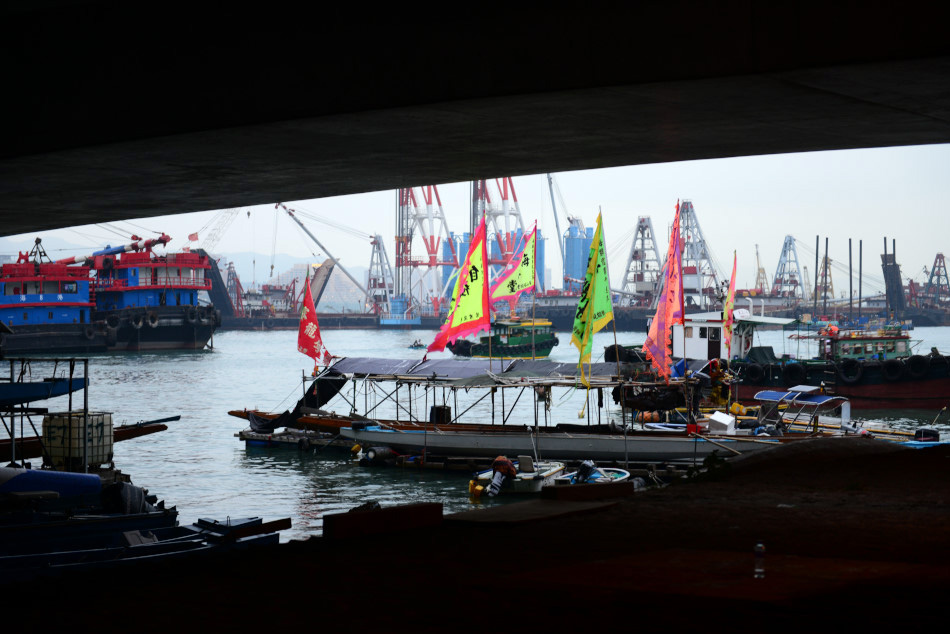 Boats by the shore at the mouth of Tuen Mun River reminded us that Tuen Mun was once a fishing village. 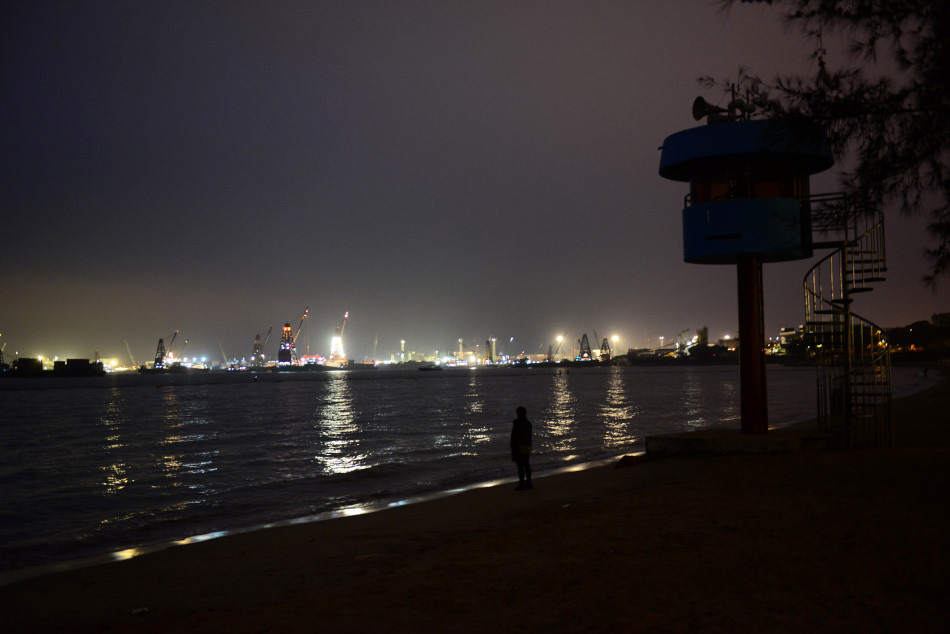 In the evening, we walked to the mouth of Tuen Mun River and reached the Butterfly Beach (蝴蝶灣) in the dark.  The Inner River Dock (內河碼頭) where container ships to and from China’s Pearl River would stop for customs.