After we came back from Fushimi Inari Taisha, we thought it would be a good idea to find a place for lunch in Downtown Kyoto.  There was still a few hours before our 18:30 flight.

We opted for a revisit of Nishiki Market (錦市場), the five block long market street known as “Kyoto’s Kitchen”.

For the past few days we didn’t really have a decent meal of sashimi.  We ended up sitting down at a sashimi restaurant Nishiki Daimaru Yoshi (錦大丸).  The restaurant was hidden behind its fishmonger shop.

At this popular restaurant, we were the first customers sitting down at the long counter in front of the food preparation area.

There was only set lunch available.  We wouldn’t mind as long as the sashimi was fresh.  The set included sashimi, tempura and grilled fish. 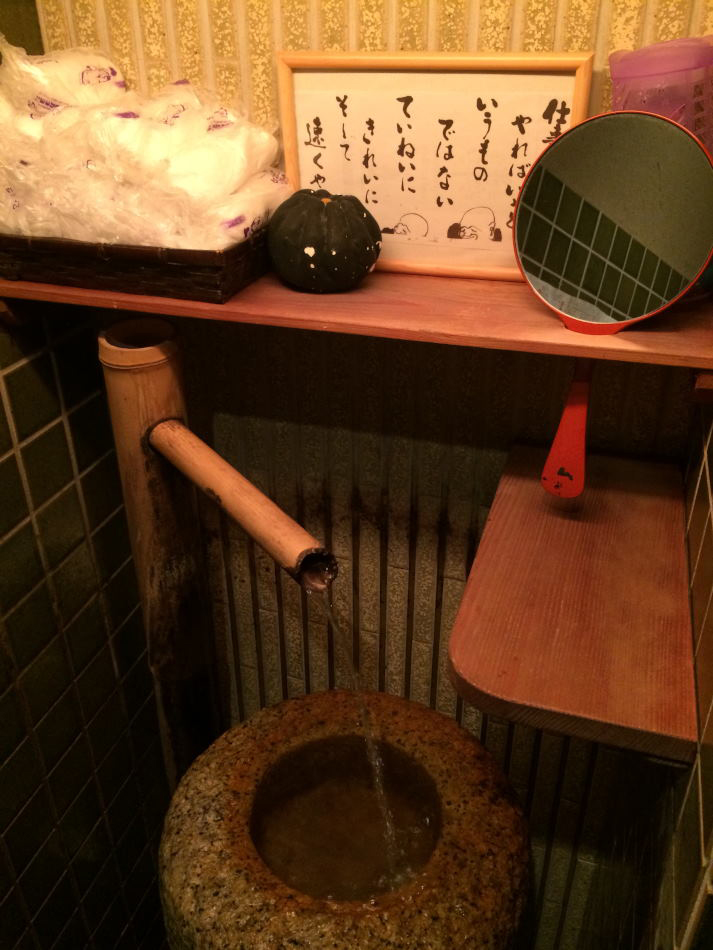 The washroom at the restaurant was small but full of character.

After lunch, we went outside of the Nishiki Market and arrived at the back side of Daimaru Department Store.  There was a small vendor selling farmer’s produce.  We couldn’t resist but bought a few items to bring back to Hong Kong.

Then we headed back into Nishiki Market for another stroll.

We passed by a vendor selling all kinds of traditional sweets and snacks.  We picked up some regional roasted peanuts.

There were quite a few shops selling Tsukemono (漬物, Japanese pickled snacks).  Many items were seasonal. 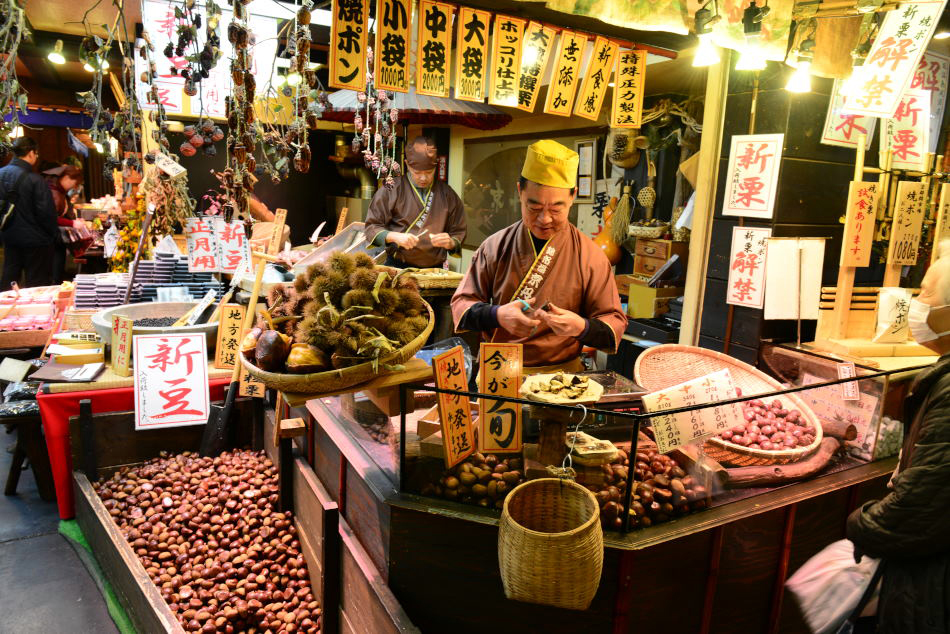 Then we passed by the chestnut shop where we bought some delicious local chestnuts before.

At the end of Nishiki Market, we arrived at the entrance of Nishiki Tenmangu Shrine, a Shinto shrine conveniently located at the heart of the downtown.

Another shop worth noting in the area was Tamaru Inbo (田丸印房), a Hanko shop, a store selling traditional stamps and seals made of wooden or stone blocks.  With over a century of professional reputation, Tamaru Inbo was a great place to check out Japanese hanko.

From Shijo Dori, we walked east to the Kamo River (鴨川).   We decided to walk south along the river for a final stroll along the peaceful river.

The weather was perfect for a relaxing stroll. 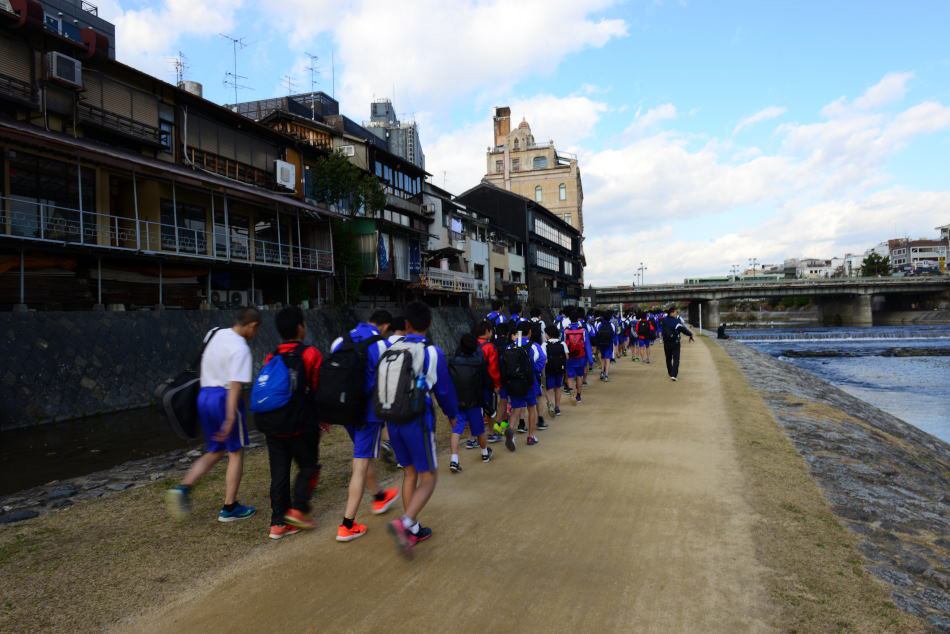 Like us, many preferred to take the route along the river instead of the city streets.

We passed by many restaurants facing the river.  Hopefully next time we would be able to enjoy a meal at one of the many waterfront dining patios during the summer months.

We left the riverbank when we reached Gojo Dori Street.  We decided to get a good cup of coffee before leaving for the airport.

We landed on a cafe called Efish just south of Gojo Dori, at Kiya-machi Dori, a small neighborhood street sandwiched between the Kamo River and Takase River (高瀬川).  Unlike several blocks up north where Kiya-machi Dori represented the vibrant restaurant and nightlife scene of the city, here the narrow street became a laid-back neighborhood alley. 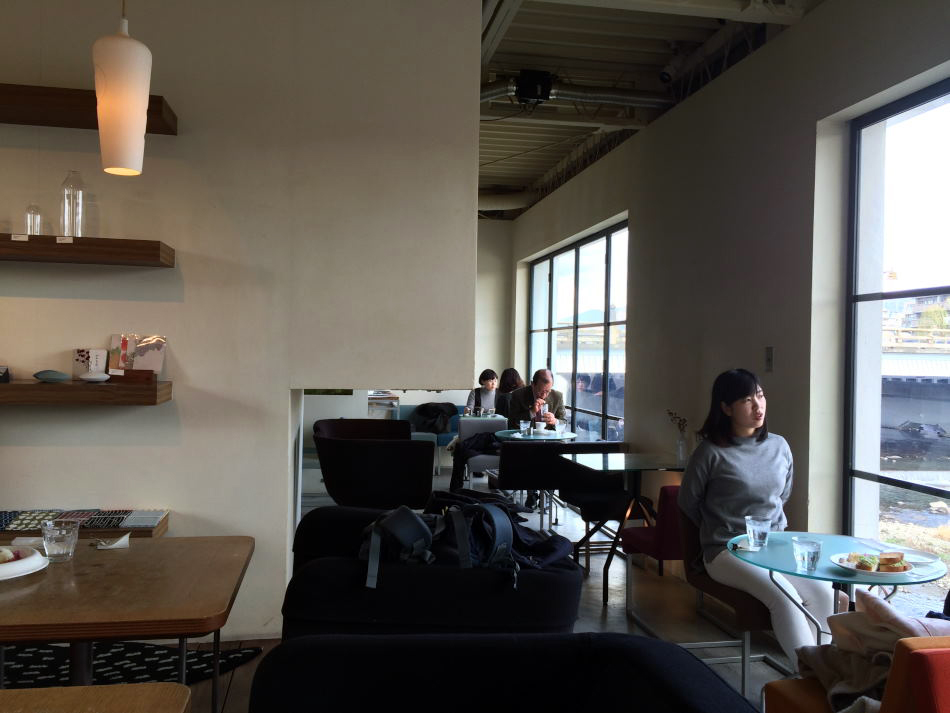 Efish is great for its relaxing atmosphere by the river.  Other than refreshing food and drinks, Efish also showcased cool design housewares inside the cafe. 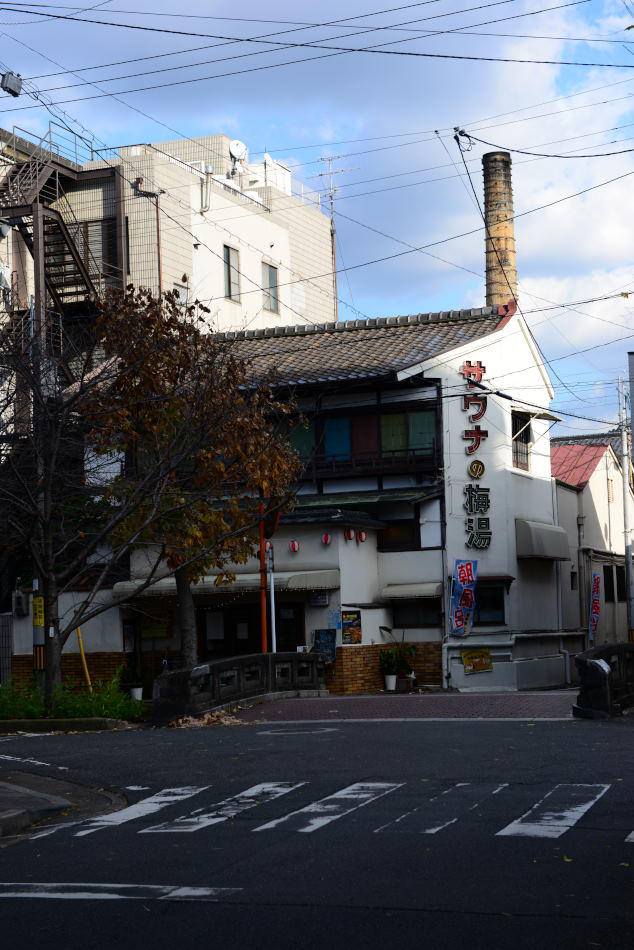 On our way from Efish to Kyoto Station, we walked past Umeyu Rakuen (サウナの梅湯), a retro 80-year old bathhouse.  In 2015, 25 year-old Yusuke Minato, a long-time devotee to traditional bathhouses, took over the declining bathhouse and transformed it into a hip venue to promote traditional bathing, as well as occasional gigs and flea market.  We didn’t have time for a soak and would have to save it till next time.

After another few minutes of walk we could see Kyoto Tower from a distance.  A big crow on the treetop over our head was making loud noises, as if yelling out our parting wishes with the ancient capital.

Minutes later we reached the futuristic Kyoto Station once again.  We took the escalators down to the basement to pick up our backpacks at the lockers and hop on a Haruka Express for the Kansai Airport.  As the train leaving the station, we were already planning for a return trip sometime in the near future.  Kyoto was and always will be the perfect venue for us to dwell in the power of heritage, nature, and spirituality whenever we were overwhelmed by the dull and routine work lives.

This concludes the record of our 5-day Kyoto trip in December 2016.