Modeled after Kinkakuji (Golden Pavilion), Ginkakuji Temple (銀閣寺, Silver Pavilion) is probably the most popular Zen temple in Northern Higashiyama.  Unlike Kinkakuji which was the cultural focus for Kyoto aristocrats, Ginkakuji was always the  centre of cultural activities for the majority throughout history.  As a Zen Buddhist temple, Ginkakuji was also named Jishō-ji (慈照寺).  It was a focus of the local cultures, and influential in a number of traditional arts, including tea ceremony, flower arrangement, poetry, theatre, horticulture, and architectural design.  Consisted of several temple buildings including the Silver Pavilion, a dry sand garden and a lush-green moss garden, Ginkakuji represents the grand finale at the northern end of the Philosopher’s Path.  After Honenin Temple, we finished the remaining portion of the Philosopher’s Path and turned right onto Ginkakuji Sando (銀閣寺参道), the approaching route that led us to the famous Zen temple. 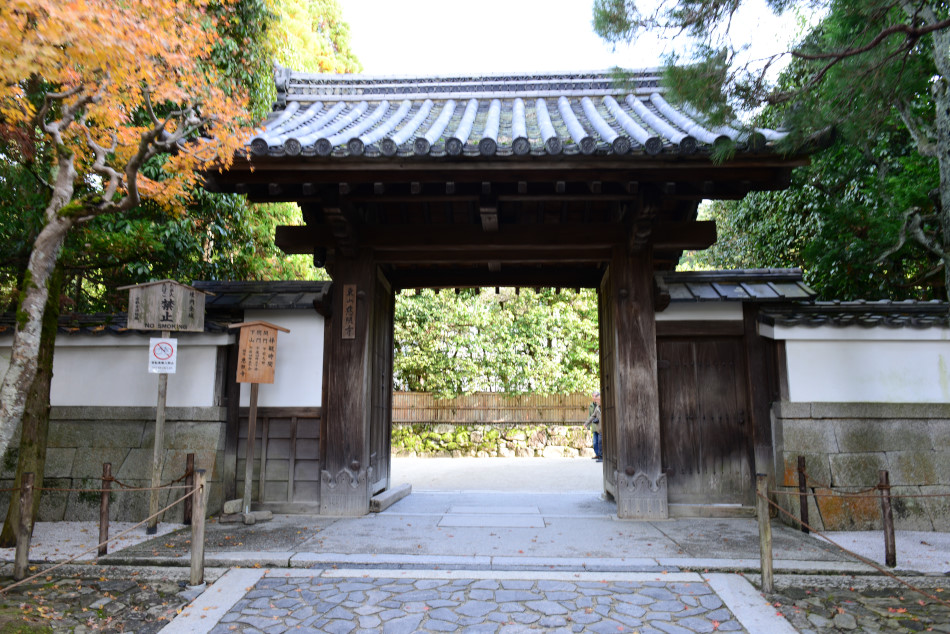 Beyond the main gate, the Ginkakuji Fence (銀閣寺垣) stood right in front of us.  We turned right and walked towards the ticket office. 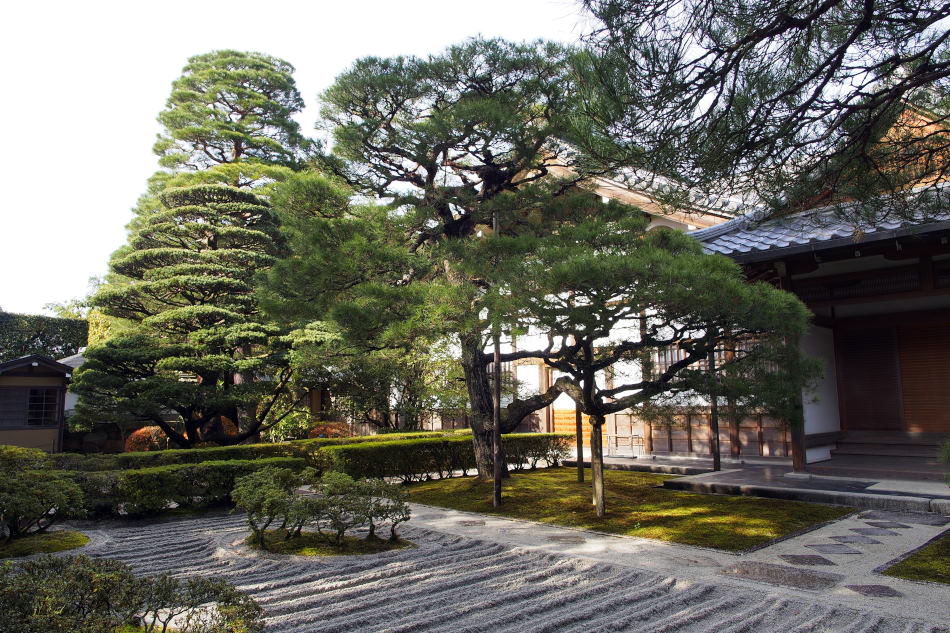 After getting our tickets, we immediately entered a small dry Zen garden.  A few pine trees stood in magnificent gestures. 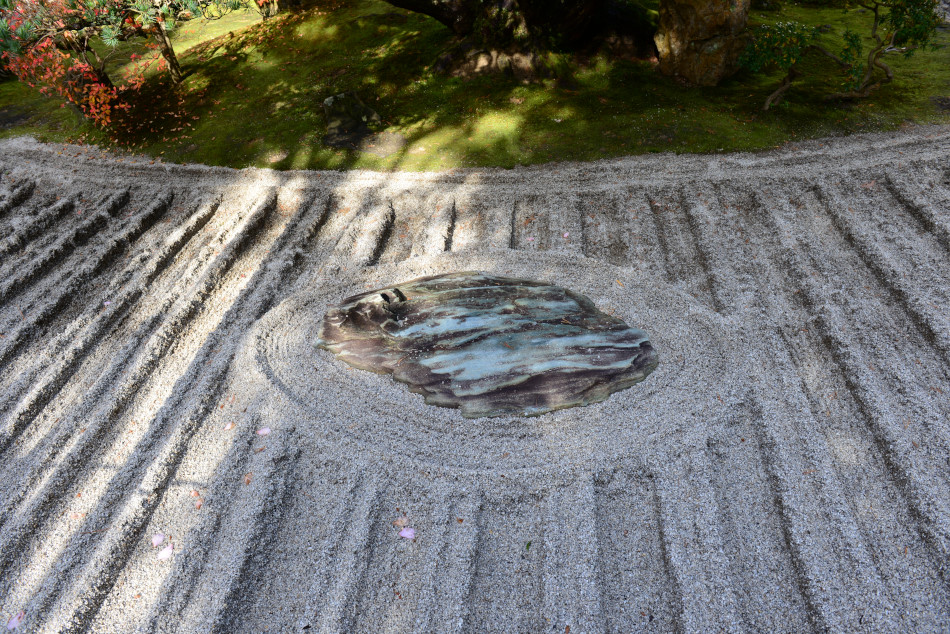 Everything in the dry Zen garden was carefully thought out and maintained. 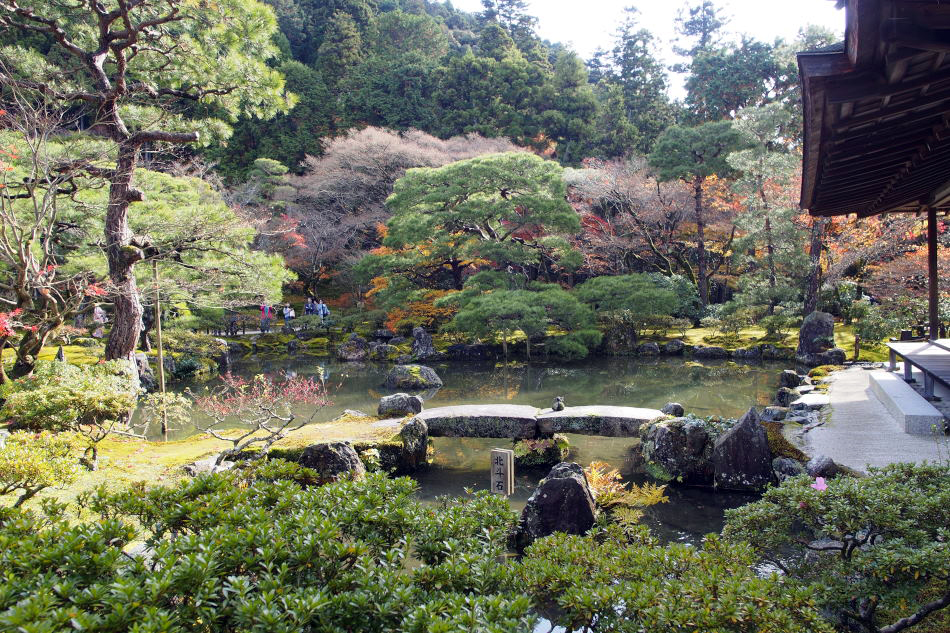 Going through the Hoshokan Gate, we arrived at the main temple ground.  Everything in the main garden centred at the Kinkyochi Pond (Mirror Pond). 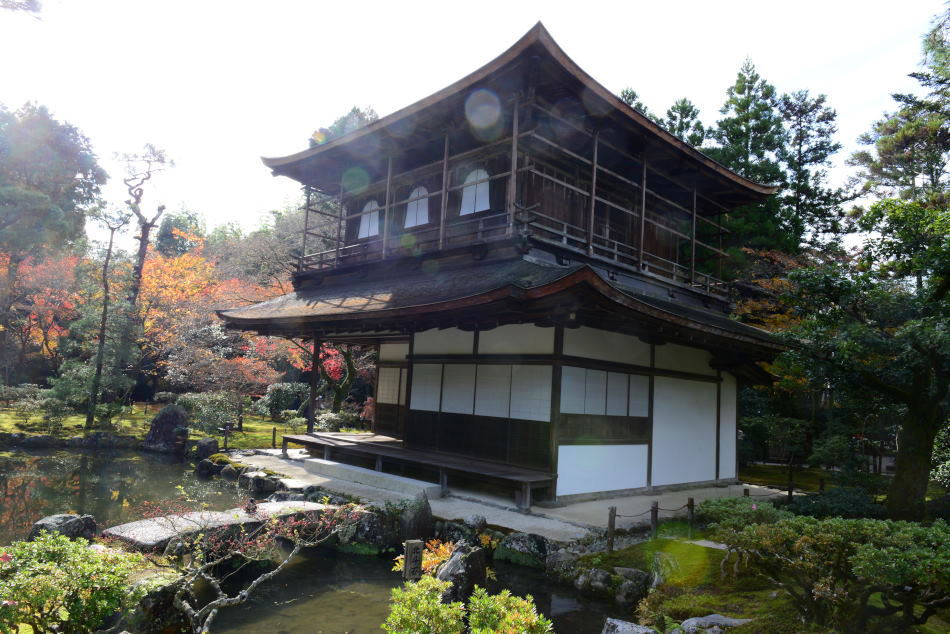 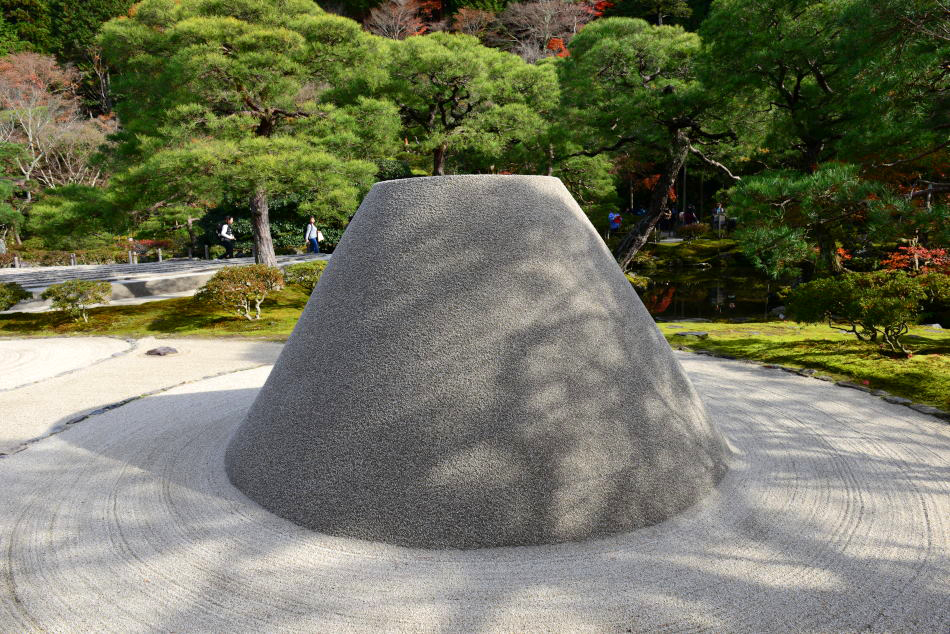 As we began to stroll along the garden path, we immediately arrived at the unique sand garden.  The first unique feature was the Kogetsudai (向月台, Moon Viewing Platform). 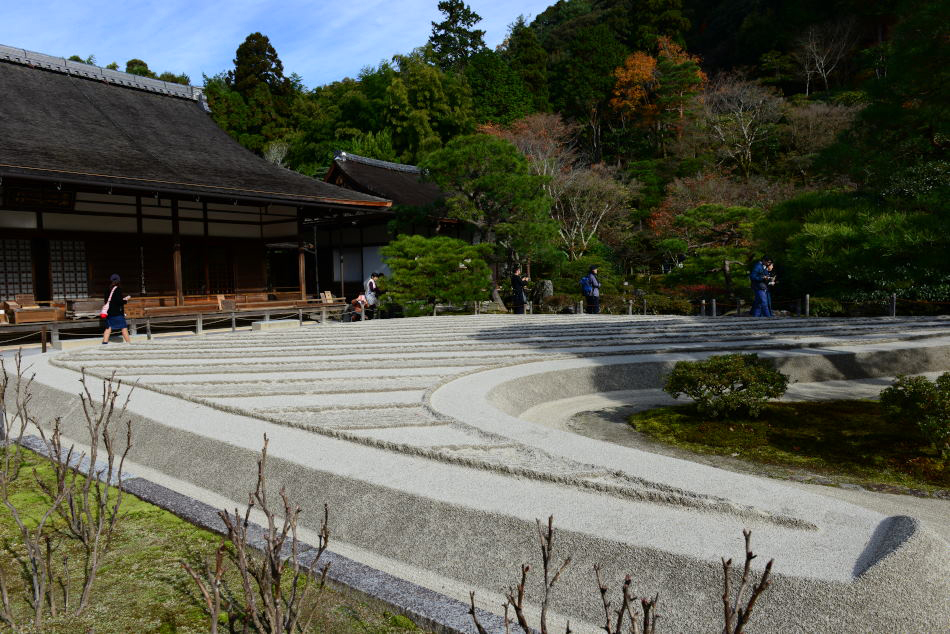 The path brought us around the Ginshadan (銀沙灘, Silver Beach) in front of Hondo (Main Hall). 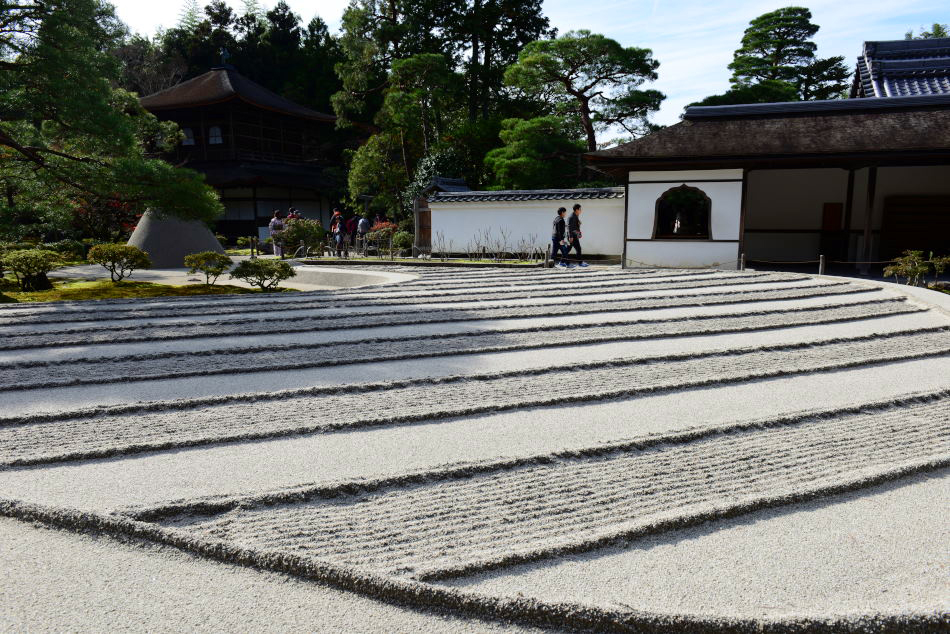 The linear patterns of the Ginshadan (銀沙灘, Silver Beach) were carefully maintained. 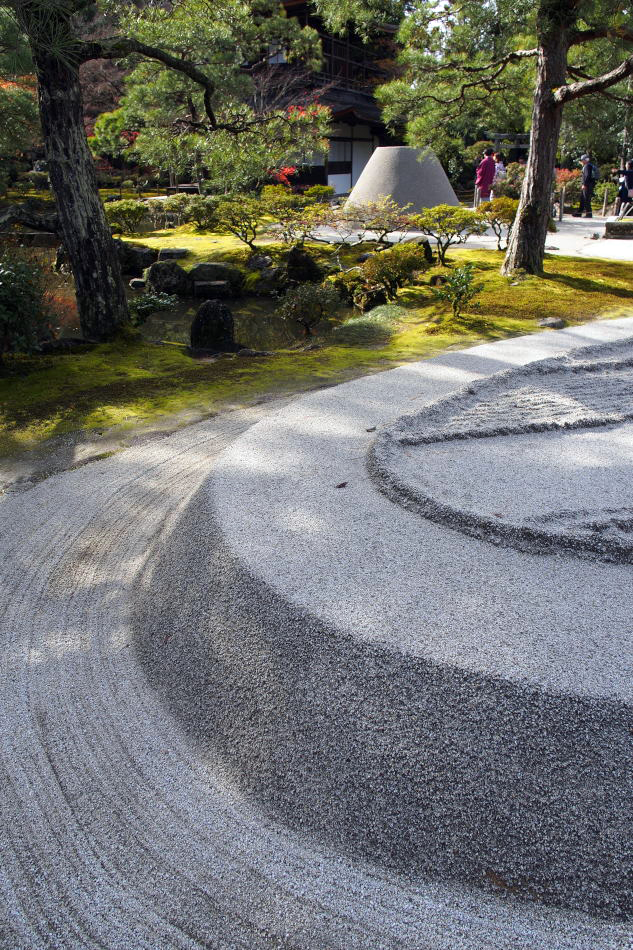 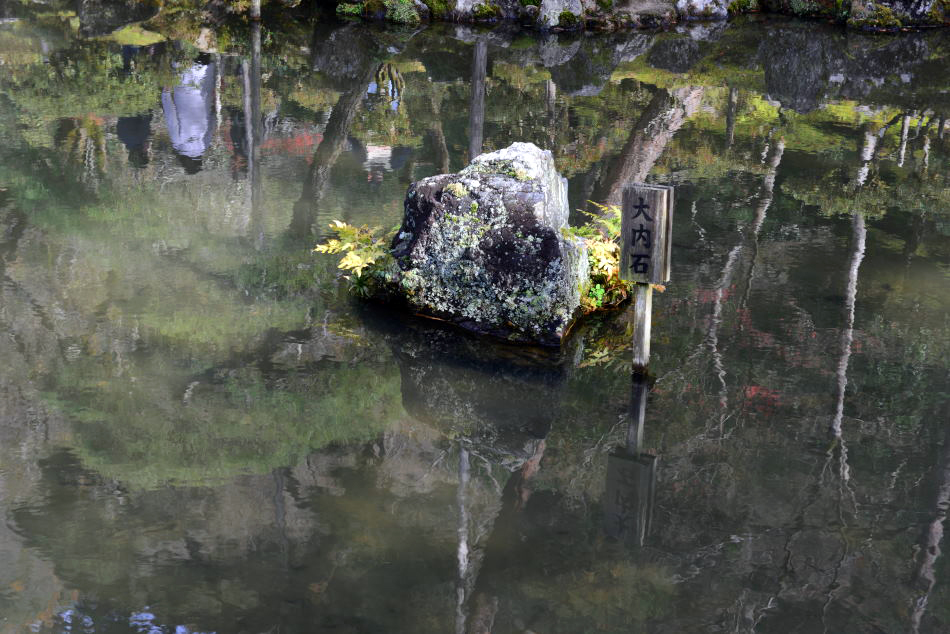 A moss-covered rock in the Kinkyochi Pond (Mirror Pond) stood like a sculpture in the water. 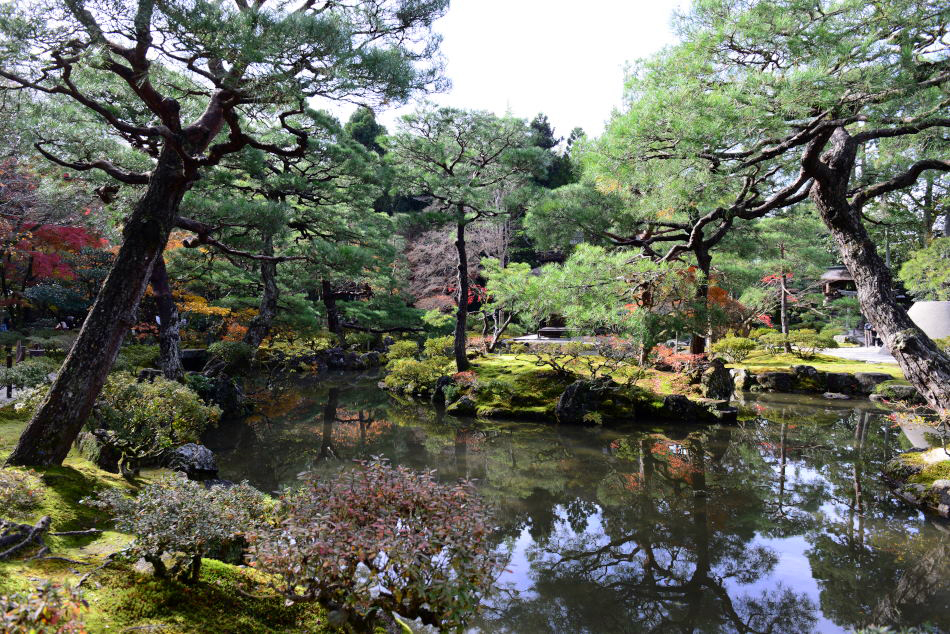 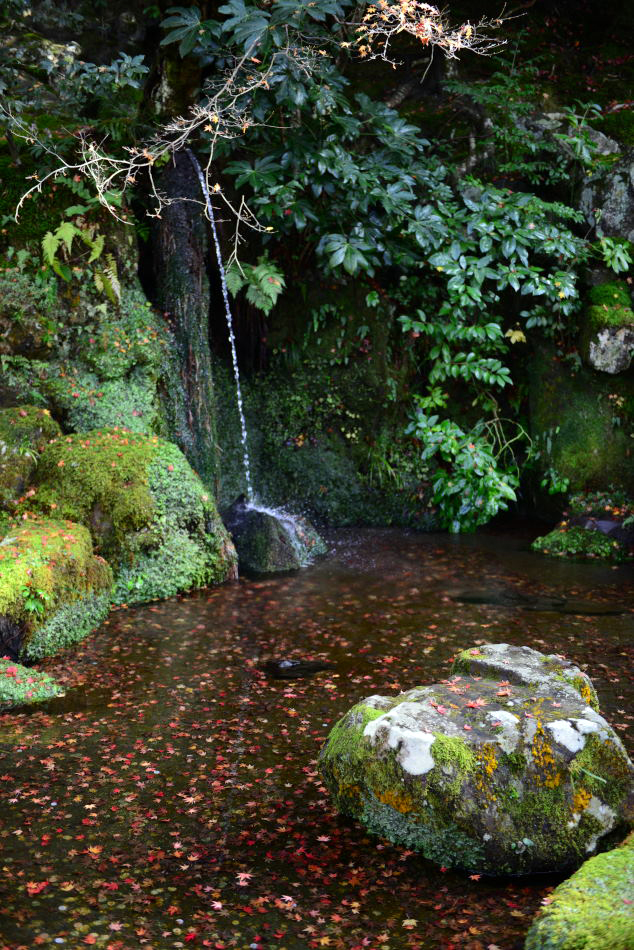 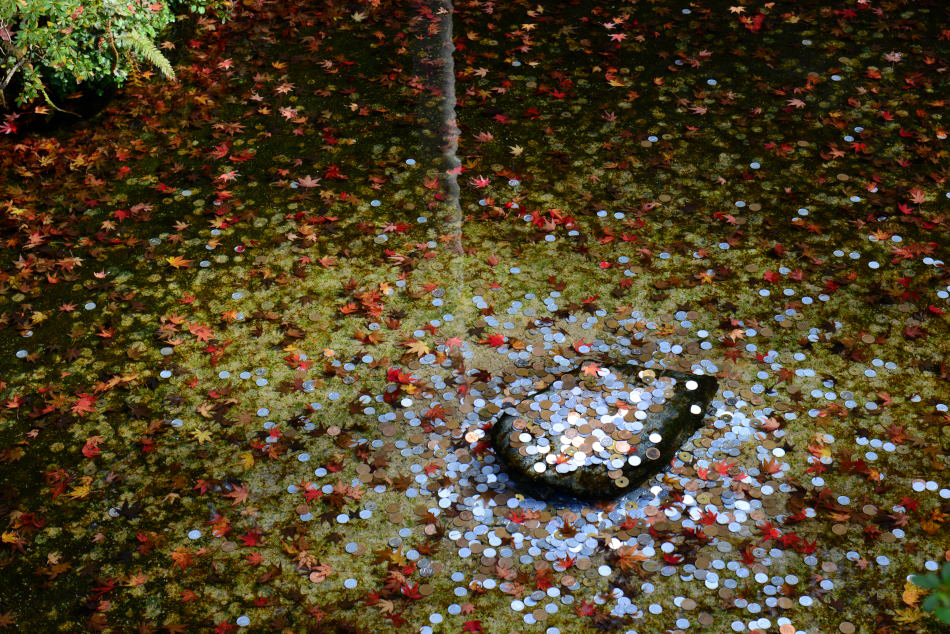 The Sengetsusen waterfall (洗月泉) had become a fountain of wishes, where visitors would throw coins onto the stone in the water to make wishes. 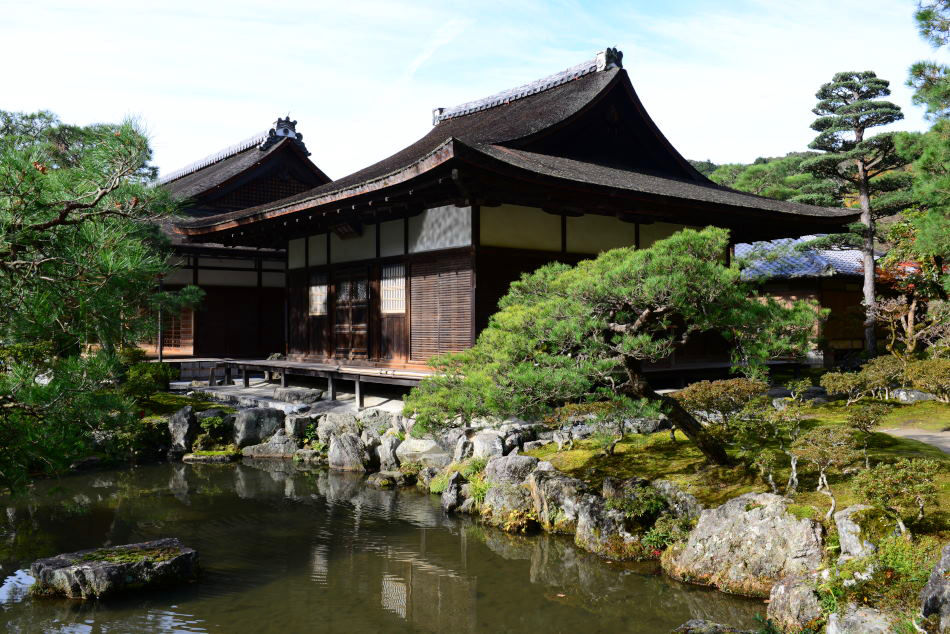 Leaving the Togudo Hall (東求堂) and Hondo behind, the path began to climb up gently onto the hill behind the temple. 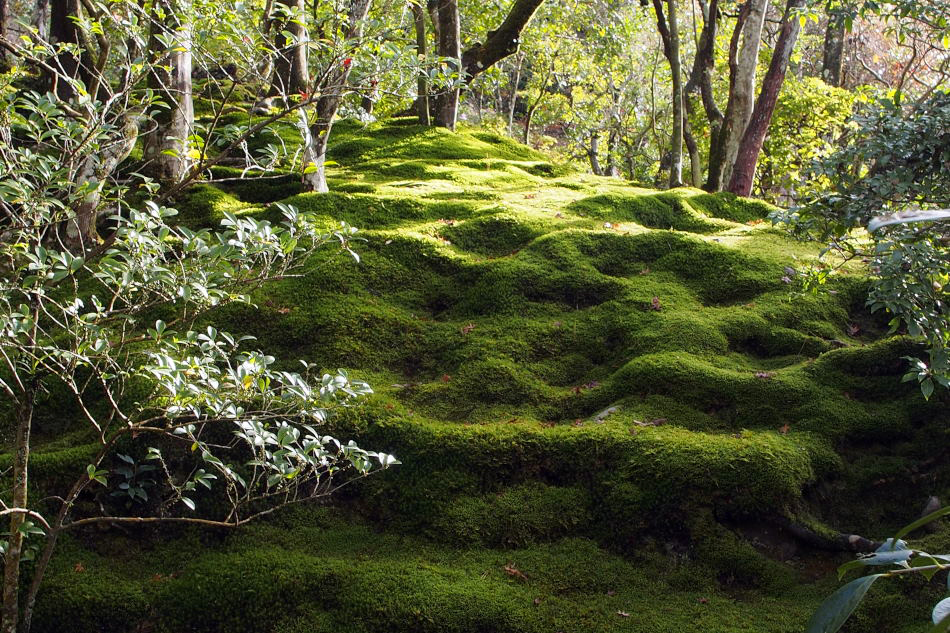 The undulating ground of the slope was covered with lush-green moss. 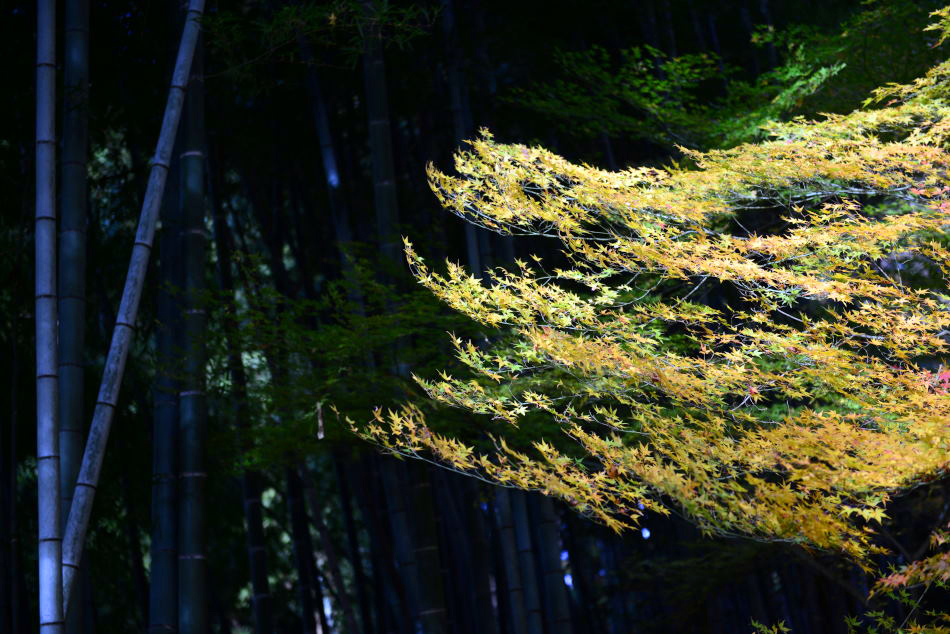 A good mix of vegetation on the hill, including maples and bamboo. 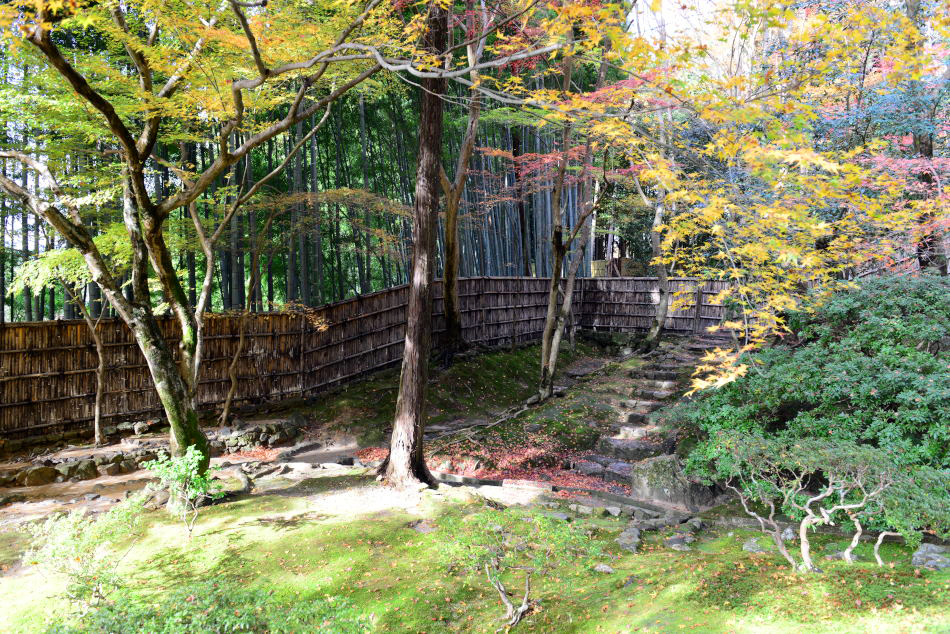 The path led us to a corner at the temple ground where the Ochanoi (Well for Tea Ceremony) was located. 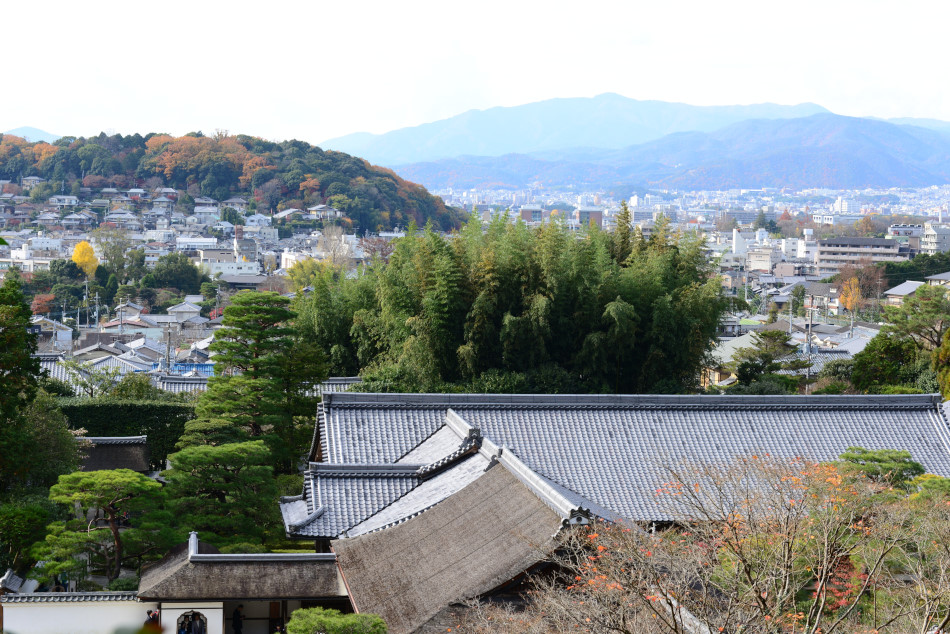 On the hill, the view back down towards the temple buildings and the Kyoto scenery beyond was spectacular. 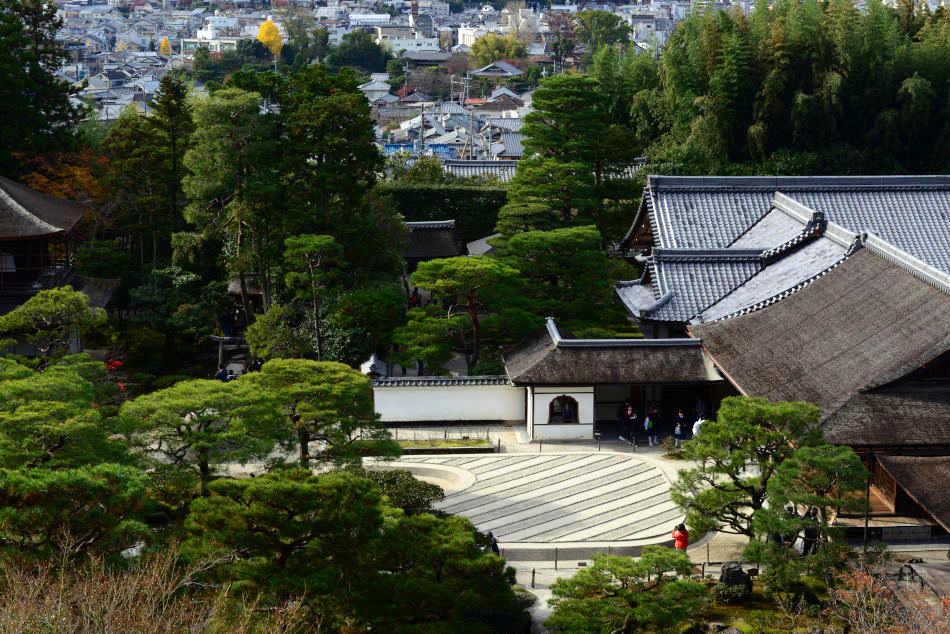 Looking down to the Ginshadan, the linear patterns of the Silver Beach looked really neat. 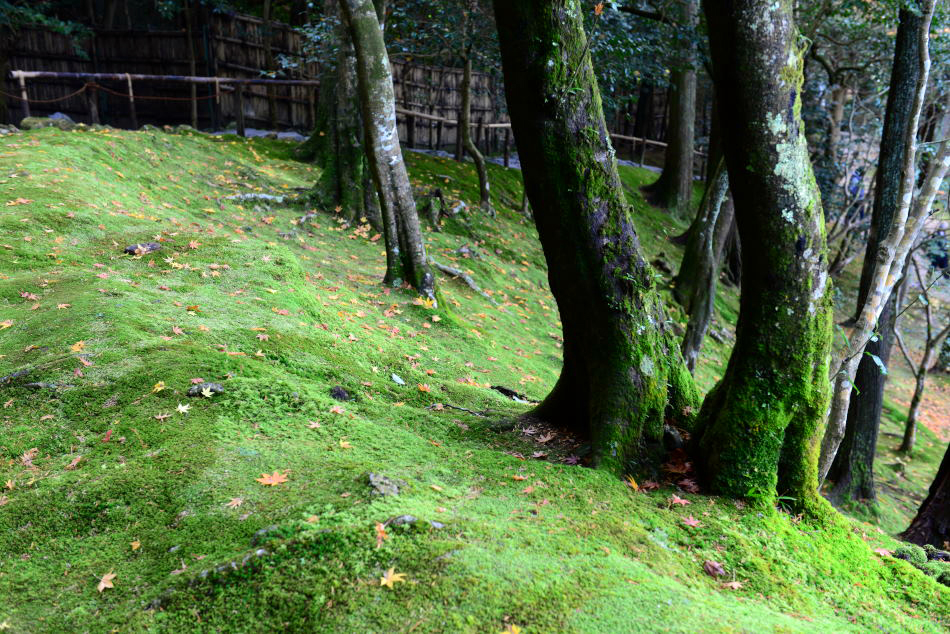 The path followed the topography led us gradually downhill back to the level of Kinkyochi Pond.  Along the way, we passed by the beautiful slopes covered with green moss. 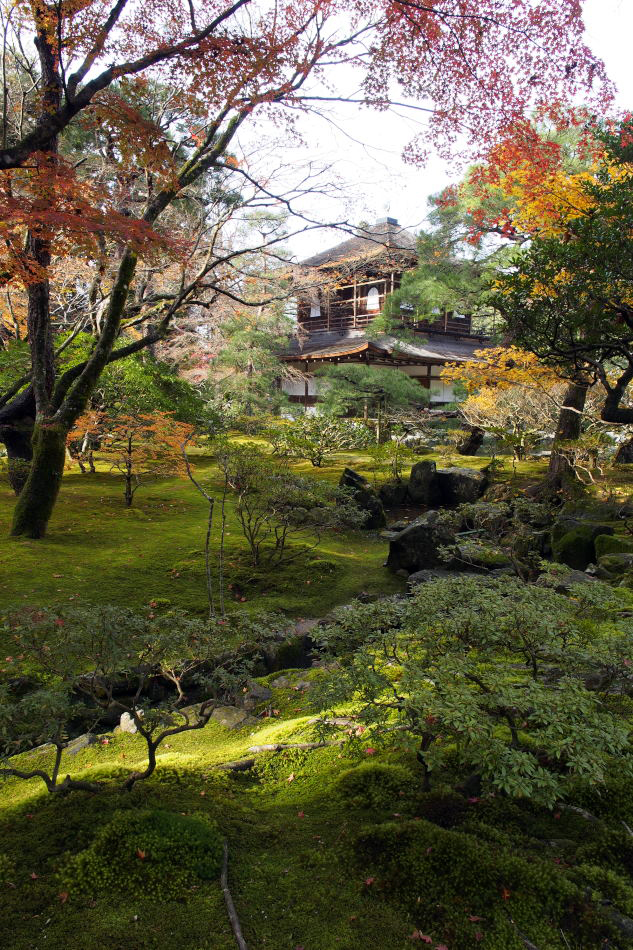 On our way out of Ginkakuji, we had a last peek at the Silver Pavilion beyond the autumn maples and the beautiful moss garden.