Claimed to be the oldest Zen Buddhist temple in Kyoto, Kenninji Temple (建仁寺) is a Buddhist temple famous for its zen gardens and traditional paintings in Gion (祇園).  Kenninji was founded in 1202 by Buddhist priest Eisai/Yousai (明菴栄西).  Two times Yousai went to China and brought back with him Zen scriptures and tea seeds, from which Zen Buddhism and the practice of green tea drinking flourished in Japan ever since.  As a result, Yousai was also considered to be the founder of the tea ceremony in Japan.  Since the 14th century, Kenninji was considered one of the five most important Zen Buddhist temples in Kyoto, known as the Gozan (五山十刹制度) or the Five Mountain System.  Today, Kenninji stands at third in this ranking system, behind Tenryuji (天龍寺) and Shokokuji (相国寺), and ahead of Tofukuji (東福寺) and Manjuji (万寿寺).  On top of this five temples is Nanzenji, which serves as the leading Zen Buddhist temple in today’s Kyoto.

Today, with its meditation gardens, ancient teahouse, and timber halls, Kenninji serves as a tranquil oasis in the busy and dense neighborhood of Gion.  We entered the Kenninji compound from its North Gate at Hanamikoji Dori.  Once inside, we took off our shoes and paid our admission at Hojo (方丈).  Inside Hojo, one of the most popular art work on display was “Fujin and Raijin”, a pair of two-folded screen depicting the Wind and Thunder Gods by Tawaraya Sotatsu (俵屋 宗達) from the early 17 century.  The dry landscape garden in front of Hojo was also quite impressive, so as the traditional paintings on the sliding doors of the building, including the Cloud Dragon (雲龍図) and Seven Sages of the Bamboo Grove (竹林七賢図).  But for us, the most amazing artwork at Kenninji was Twin Dragons (双龍図), a 11.4m x 15.7m ceiling mural by Koizumi Junsaku in the Hatto (法堂), or Dharma Hall to celebrate the 800-year anniversary of the temple.  Completed in 2002, it took Koizumi Junsaku two years to finish this enormous ceiling painting in the gymnasium of an elementary school in Hokkaido.

Also worth noting was the Toyobo Tea-house, a two mat tea room dated back to the 16th century.  We peeked through an opening into the tea-house and saw a simple interior with tatami flooring and a semi-open partition supported by a natural wooden branch as column.  Before leaving, we spent a considerable period of time at Choontei Garden (潮音庭), a beautifully constructed zen garden surrounded by wooden verandas.  At Choontei, there were three stones at the centre of the courtyard, representing Buddha and two Zen monks.  Choontei was also the perfect courtyard to sit on the veranda and admire the autumn maples.  On our way out, we passed by another small courtyard which named as ○△□.  The serene garden introduces landscape components such as a tree in circular planter or a square area of gravel as visual representations of ○△□, which symbolized water, fire and earth.  The spiritual experience of the gardens, the lovely visual palette of the dark timber, green moss and crimson maples, and the refreshing breeze and warm sunlight enabled us to enjoy a moment of meditation.  Leaving this tranquil dimension, we would meander through Gion, cross the picturesque Kamo River, and enter the busy streets of Downtown Kyoto. 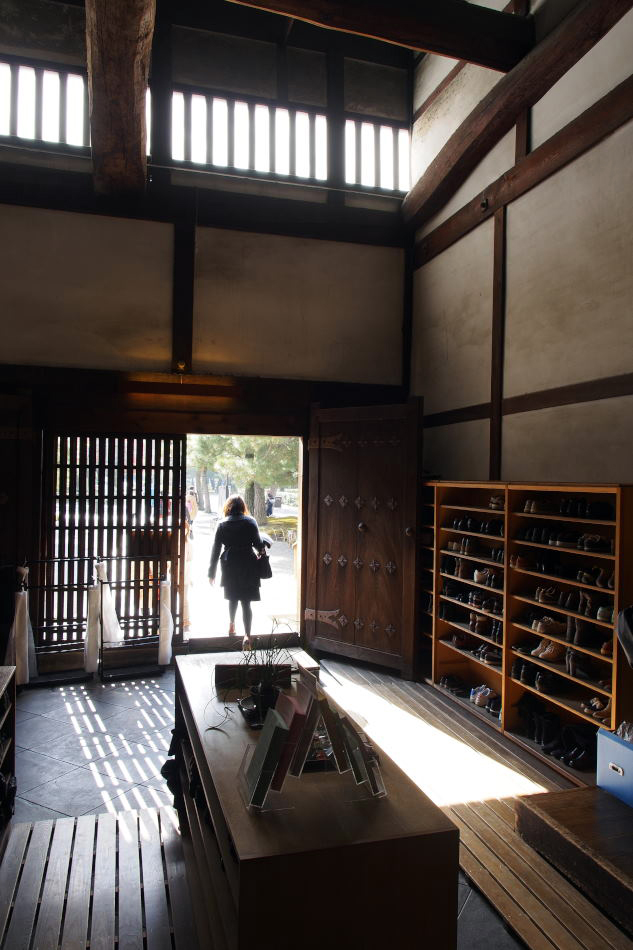 The first thing of the visit was to take off our shoes.

“Fujin and Raijin”or the Wind and Thunder God, is the most popular artworks in Kenninji Temple.

Visitors sitting by the veranda of Hojo to admire the dry landscape garden. 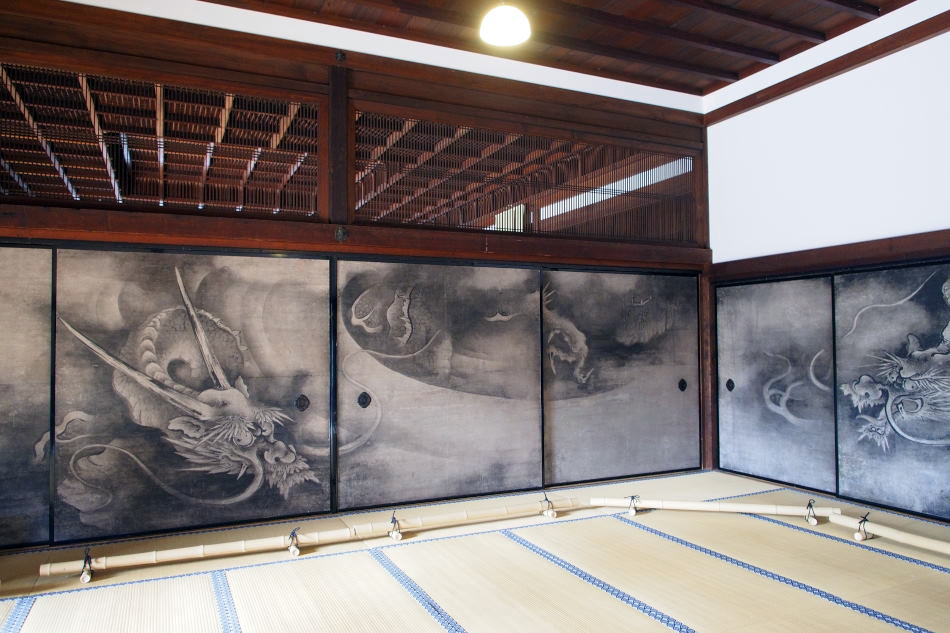 The Cloud Dragon screen paintings at the Hojo were by 16th century artist Kaiho Yusho.

The elegant prayer hall of Hojo with the painting of Seven Sages of the Bamboo Grove (竹林七賢図) on the sliding screens. 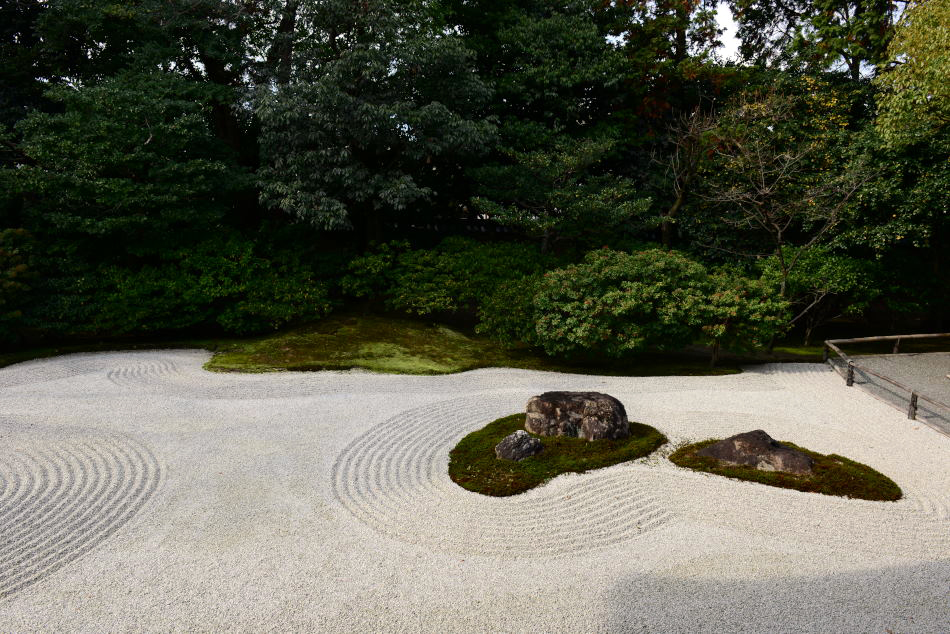 Zen Garden or the dry landscape garden at Hojo.

Visitors relaxed themselves at the veranda in front of the Zen Garden.

We saw quite a number of young women dressed traditional kimono dress in several sights of Kyoto, including Kenninji. 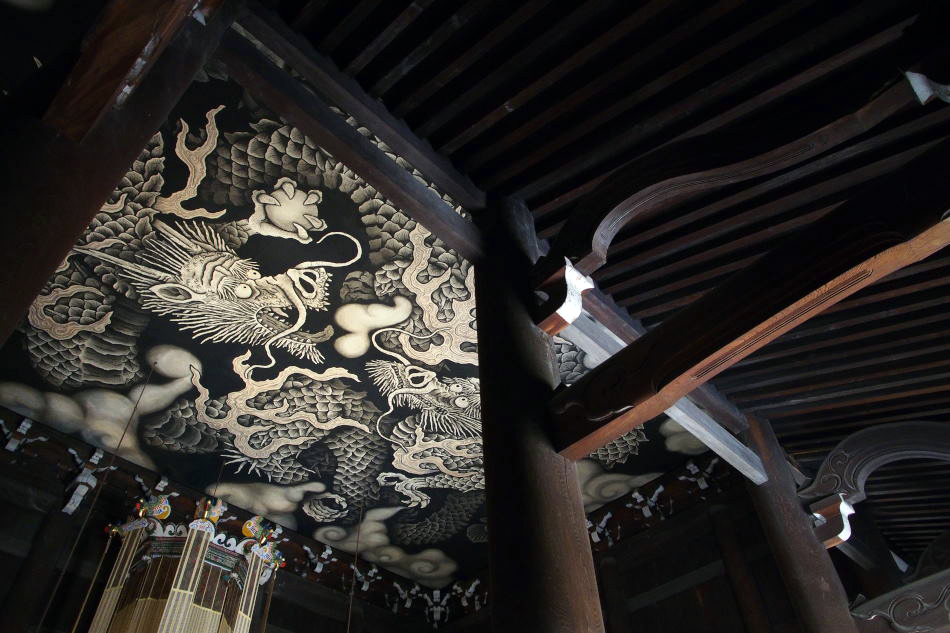 The enormous ceiling mural of Twin Dragons (双龍図) in the Hatto (法堂) or the Dharma Hall. 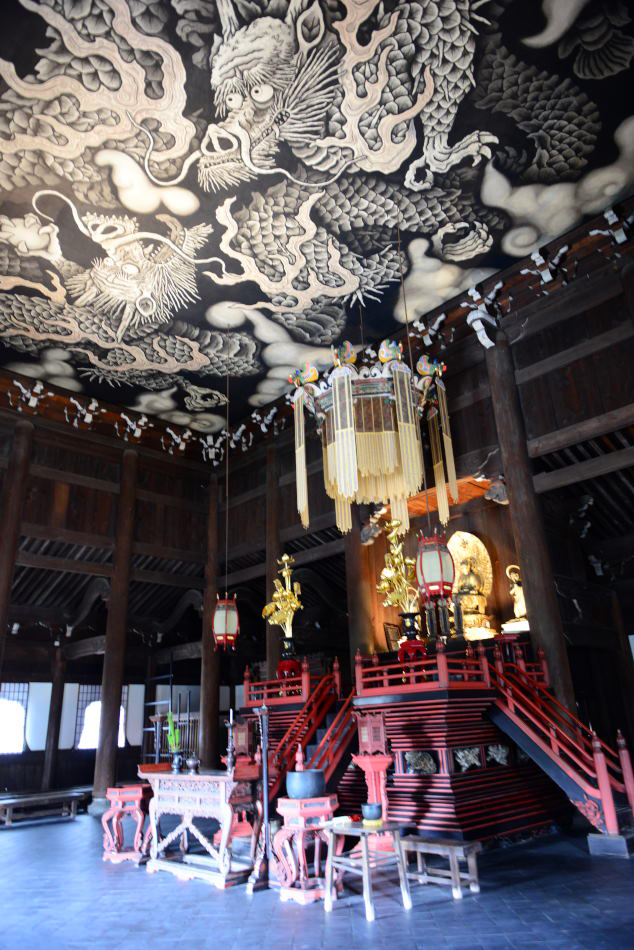 Twin Dragons over the main altar at Hatto.

A stone tsukubai (蹲踞) or stone waterbasin in the tea house garden of Kenninji. 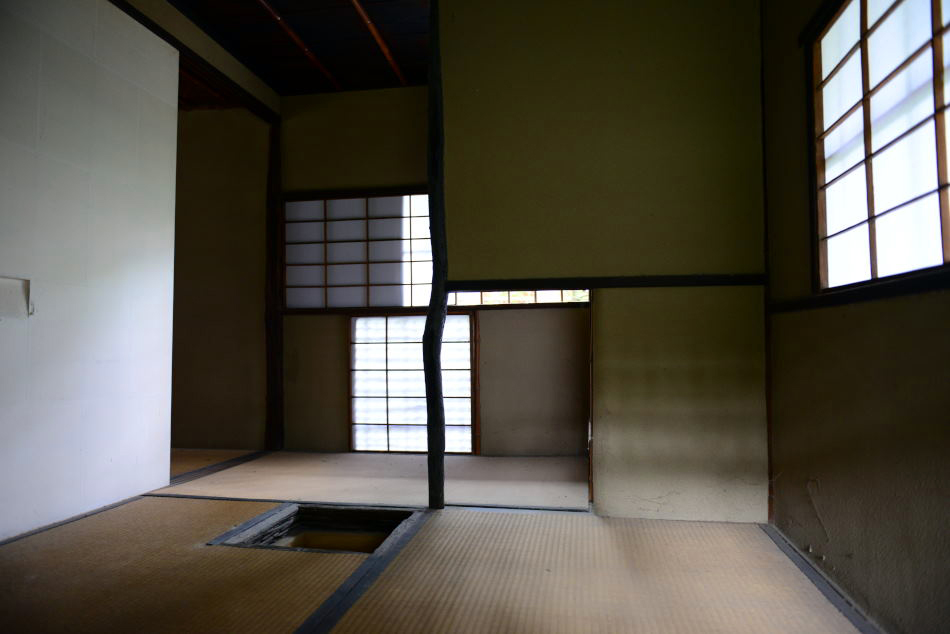 The minimalist Toyobo Tea-house was built in 1587. 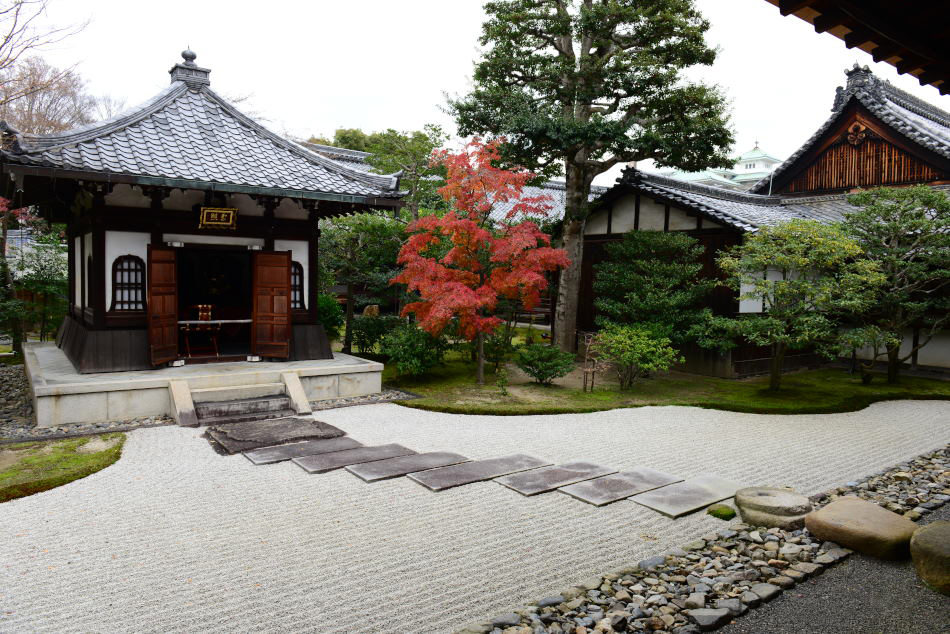 A path of stone pavers connected a prayer pavilion with the building’s veranda.

Overview of Chouontei Garden (潮音庭), with the San-zon seki (the three stones that represent Buddha and two Zen monks. 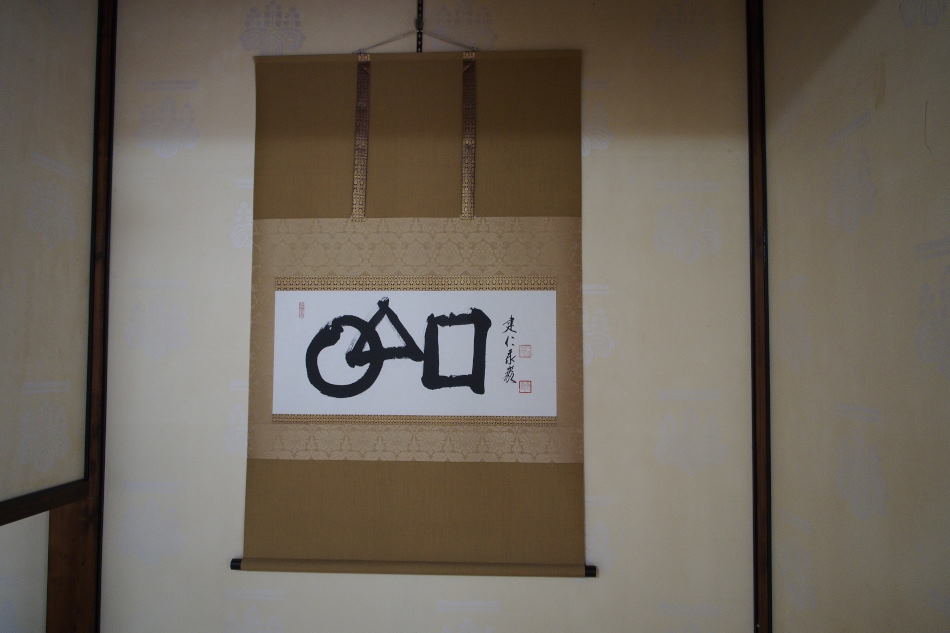 Leaving Kenninji behind, we were ready to venture into Downtown Kyoto to experience the other side of the ancient city.