After having a quick  lunch, we hopped on a tuk-tuk to reach our next destination, Jama Masjid.  The driver dropped us off on Esplanade Road at the east entrance, one of three gateways into the complex.  We climbed up a long flight of stair to reach the level of the main courtyard and east gate.  At the entrance gate, we took off our shoes and paid a “camera fee”.  It was late afternoon and the sun was behind the mosque and its 40m minarets, casting long shadows onto the ground of the main courtyard.  It was not the best time of the day for photo shooting but we still found this red sandstone & marble building magnificent despite signs of deterioration.

Built between 1644 to 1658, Jama Masjid is the largest mosque in India.  The Mughal architecture was built out of marble and red sandstone, with two minarets, three domes, a prayer hall, three sides of covered colonnade, and an open courtyard that can accommodate 25,000 worshipers for prayers.  Because of the afternoon heat, there were not many people staying in the vast open ground in front of the prayer hall.  Most people took shelter under the covered colonnade surrounding the courtyard.  There was a large rectangular fountain in the courtyard outside of the prayer hall for ablution.  Without our shoes on, we could feel the burning heat from the stones under our feet.  We followed the path made out of a fabric to reach the semi-opened prayer hall.  Without interrupting other people, we picked a quiet corner and sat down on one of the 899 bordered marble slabs (marked for worshipers) to absorb the atmosphere.  Sitting by an open bay facing the courtyard, we saw a group of enthusiastic young children helping a senior staff to wash the courtyard floor.  Under the scorching sun, the children seemed to be the most energetic people in the courtyard.  They ran around the courtyard, chasing each other and the pigeons.  It was their laughter and giggling that made us feel more at ease in this unbearable heat.

The magnificent architecture of the east gate, flanked by the covered colonnades. 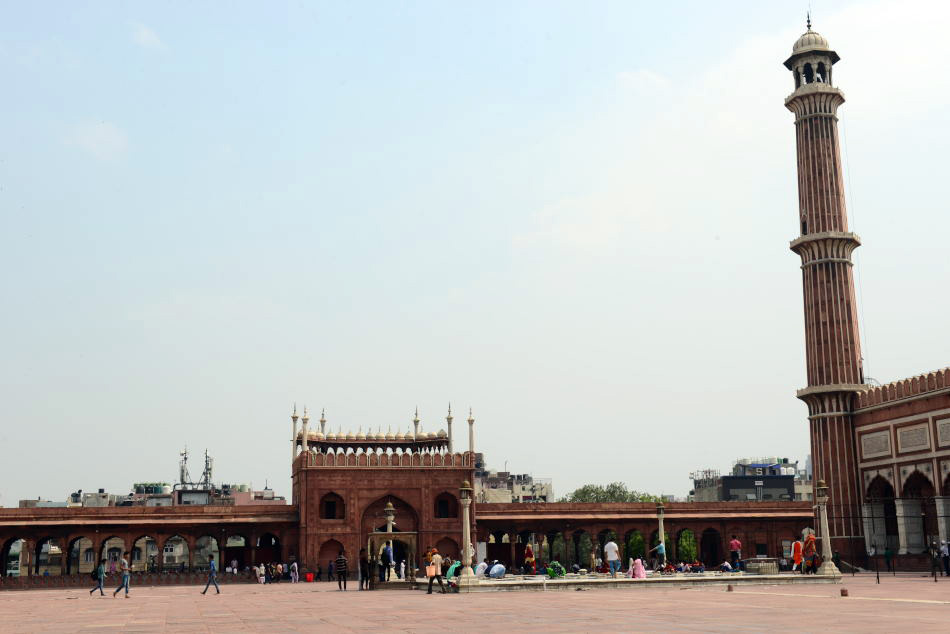 The south gate and one of the two 40m minarets.

The prayer hall with its three domes and two minarets.

There are 899 marble floor slabs inside the prayer hall defined for worshipers.

One of the worshipers at the prayer hall with the courtyard beyond. 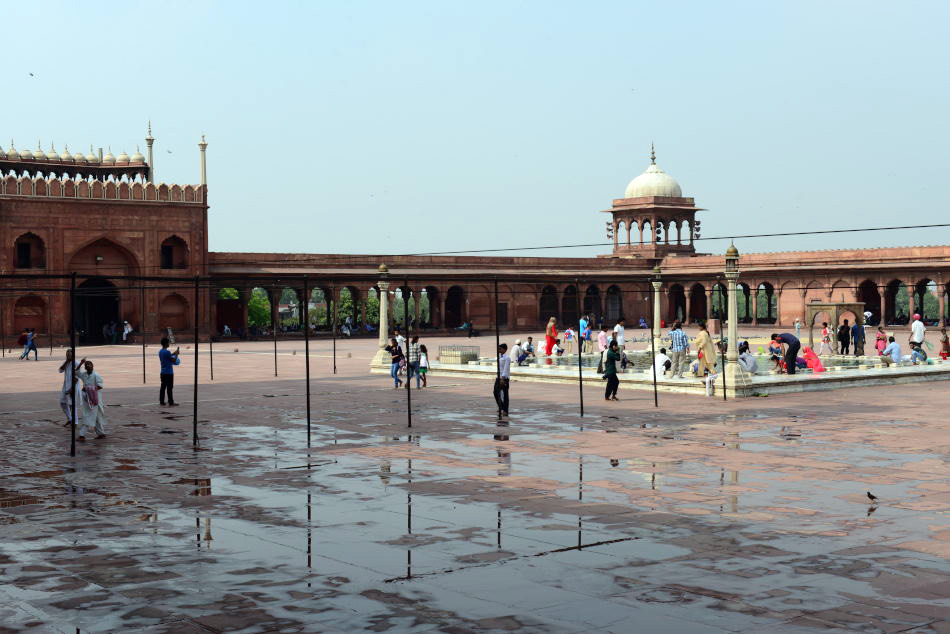 The east gate, fountain and the main courtyard. 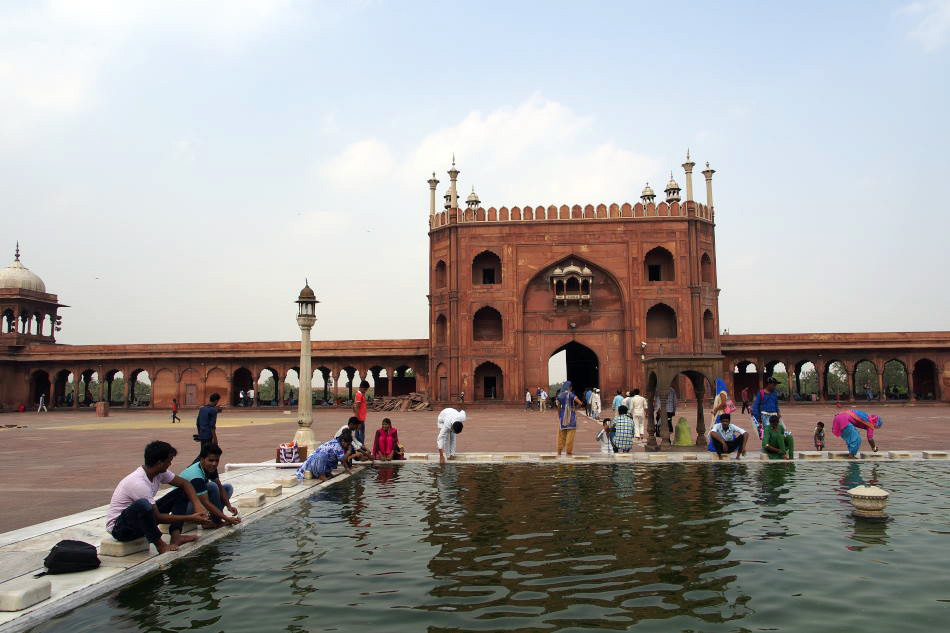 People sat around the fountain for ablution.

Worshipers inside the semi-opened prayer hall.

The ground was constantly washed with water by staff.

Visitors with shorts and sleeveless tops had to cover up their bodies with fabrics provided at the entrance gate. 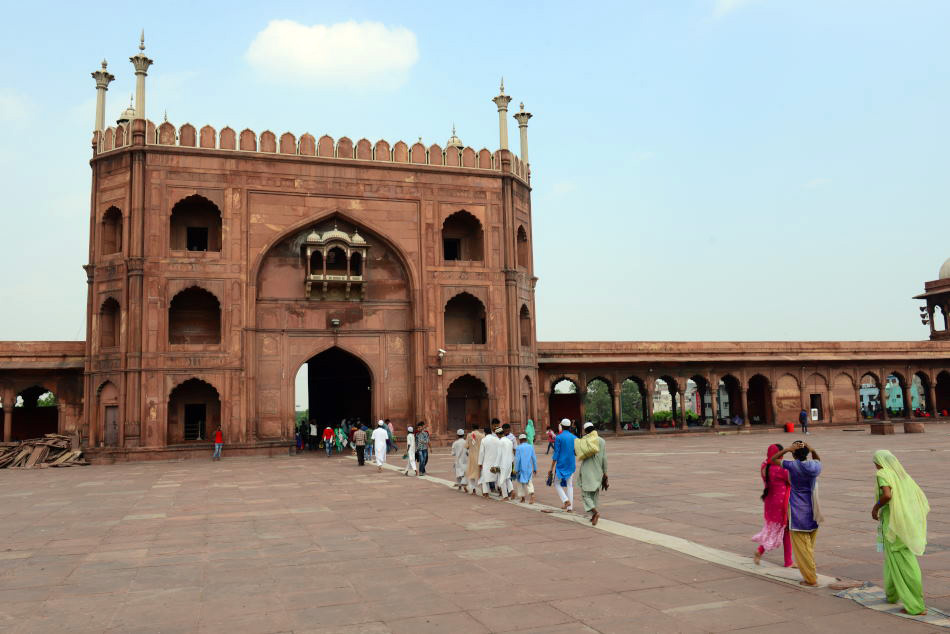 The path paved with cloths leads to the east gate. 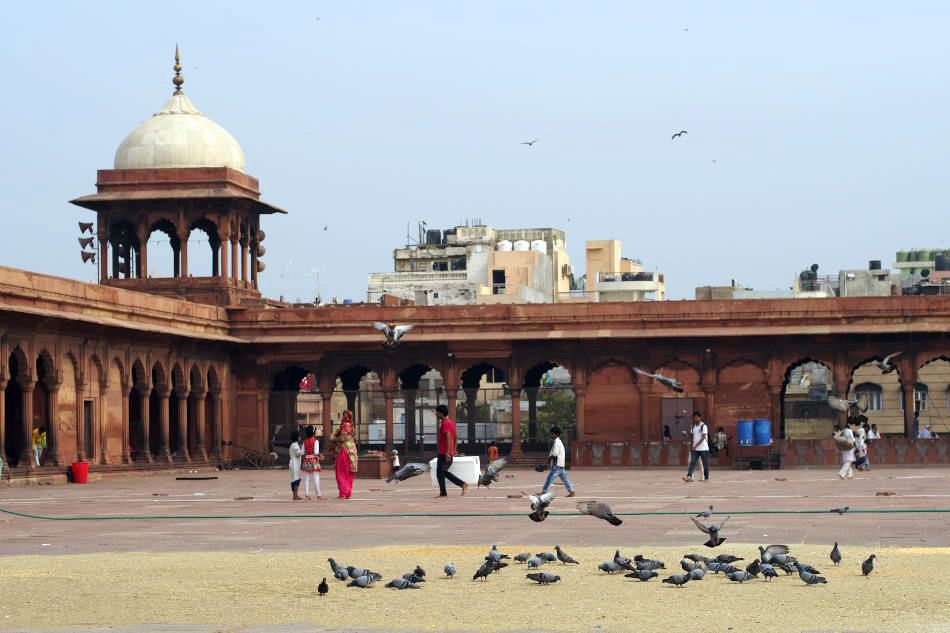 Pigeons gathered at the main courtyard where a large patch of yellow grains were scattered.  The birds were constantly scared away by children.

We could hear the kids’ laughter as they successfully chased off the pigeons.

A boy running across the courtyard in front of the prayer hall. 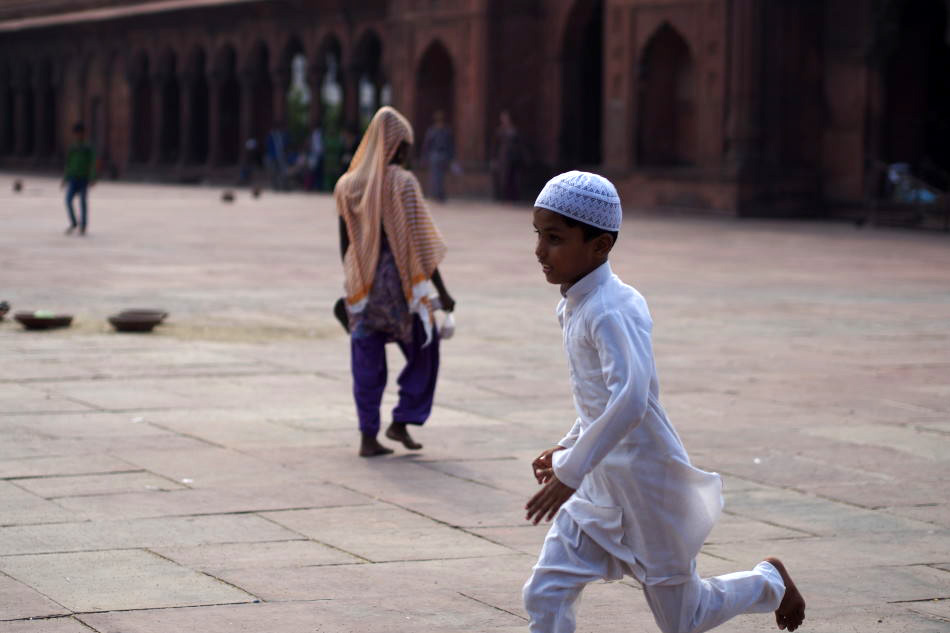 Close up of the running boy. 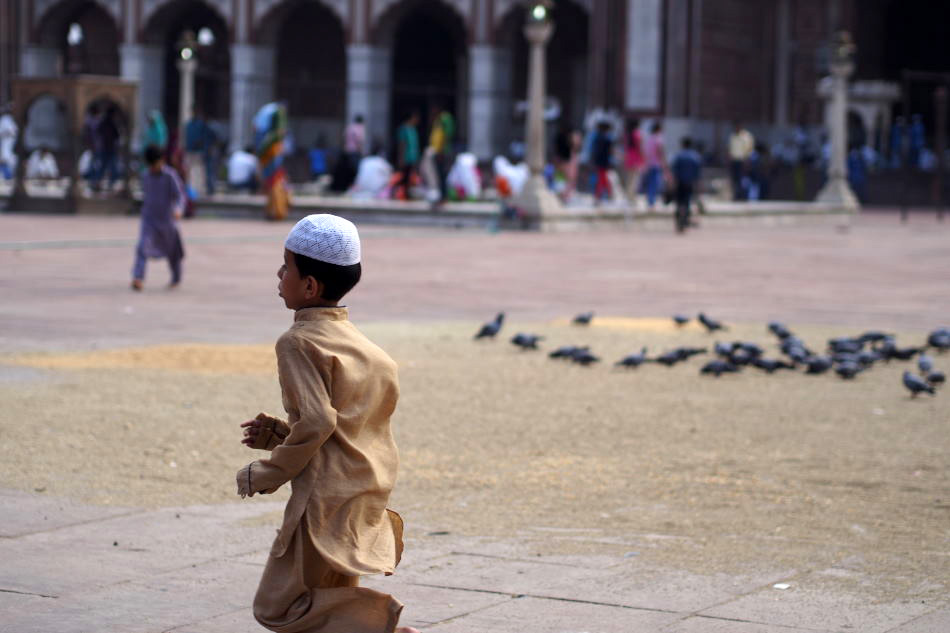 Another boy running in the main courtyard.

The defensive wall and watch towers of the Red Fort didn’t seem to be far away from Jama Masjid. 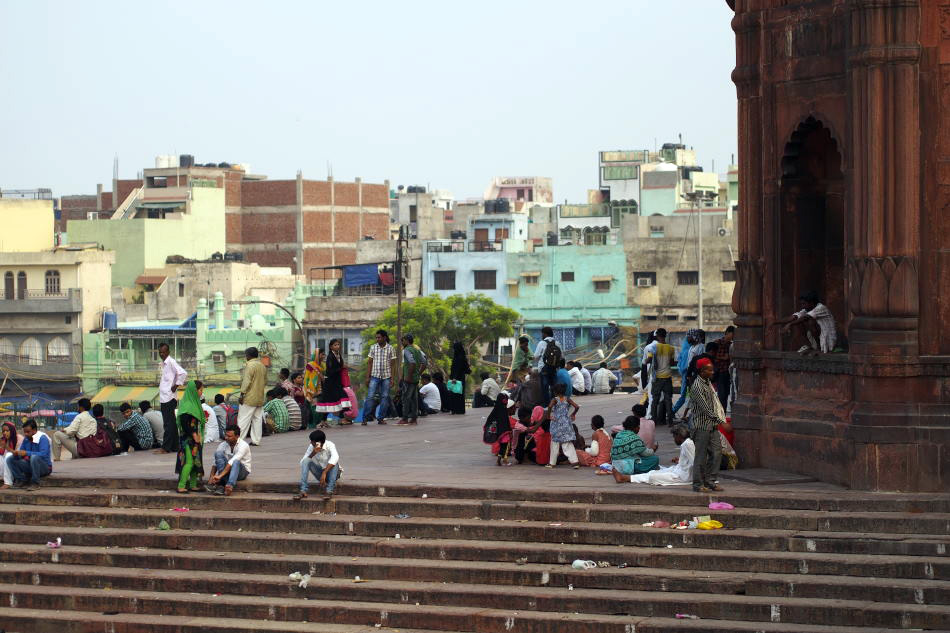 There were many people gathered around the east gate where we entered the building. When we entered the mosque, there were people offered to safe guard our shoes for a little money. 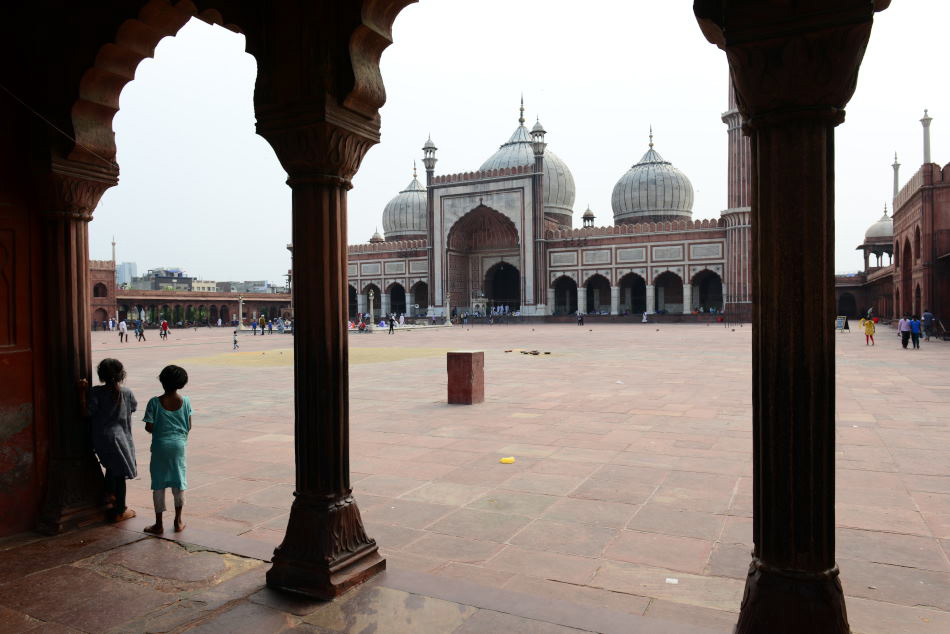 View of the payer hall from the cover colonnade.

We exited the mosque through the west gate.  The grandeur of the steps with the domes and minarets beyond was breathtaking.