We had high expectations for Alchi Gompa, which has long been famous for its wall paintings dated back to the 12th century.  It was already past noontime when we were done with Lamayuru.  By the time we reached our next destination Alchi, we couldn’t wait to sit down at the outdoor restaurant of Zimskhang Holiday Home for a quick bite.  Under the shades of trees and fabric canopies, Tachi and we had a relaxing lunch of local dishes.  After the meal, we entered a winding passageway and through a lane full of souvenir stalls until reaching the monastery compound.   A number of centuries-old stupas decorated with colourful prayer flags flanked the monastery forecourt.  There were three ancient shrines that visitors could enter and admire the wall paintings, along with the huge statues of Buddha.    It was not allowed to take photographs inside the shrines.  We could only admire the richly decorated halls while we were there.  The Buddhist statues and interior architectural details dated back to almost a thousand years were amazing.  However, many of the wall paintings were either darken over the years or were partially ruined by brutal restorations painted over the originals.  There wasn’t as much to see at Alchi as we imagined before our visit.  After visits of the three halls among the crowds of local tourists we decided to move on to Likir Gompa.

Situated at an relatively isolated about 10km away from the Leh-Srinigar Highway, Likir Gompa is a beautiful Tibetan Buddhist monastery of the Gelug sect founded in the 11th century.  As we approach the monastery, we could see the 23m golden statue of Maitreya Buddha (Buddha of Future) from a distance.  Tashi didn’t join us for our tour of the monastery as he wanted to wash the car.  On our own, we first walked to the platform where the 23m Maitreya Buddha sat.  Opposite from the golden plated statue stood a lama school complex.  Several young lamas were playing and chasing each other at the school courtyard.  Their laughter certainly lifted our spirit a little in the grey and cool afternoon.  Inside Likir Gompa,  we visited two assembly halls: an older hall with rolls of seating flanked by wall shelving full of ancient texts and a newer hall decorated with glossy wall thangka depicting Mahakala (a fierce looking protector deity) in various gestures.  We took our time to admire the wall paintings and walk around the monastery from its rooftop to exterior platforms.  By the time we returned to the entrance plaza, Tachi was done cleaning the car and ready for our return journey to Leh.

The winding passage that led into Alchi Monastery.

The twin trees marked the location of the original spot where Lama Rinchen Zangpo put his walking stick down and founded the monastery in the 10th century, so as the legend said.

The ornate woodwork of the columns and the interior decorations at Alchi were created by Kashmir artists.

Details of the entrance woodwork. 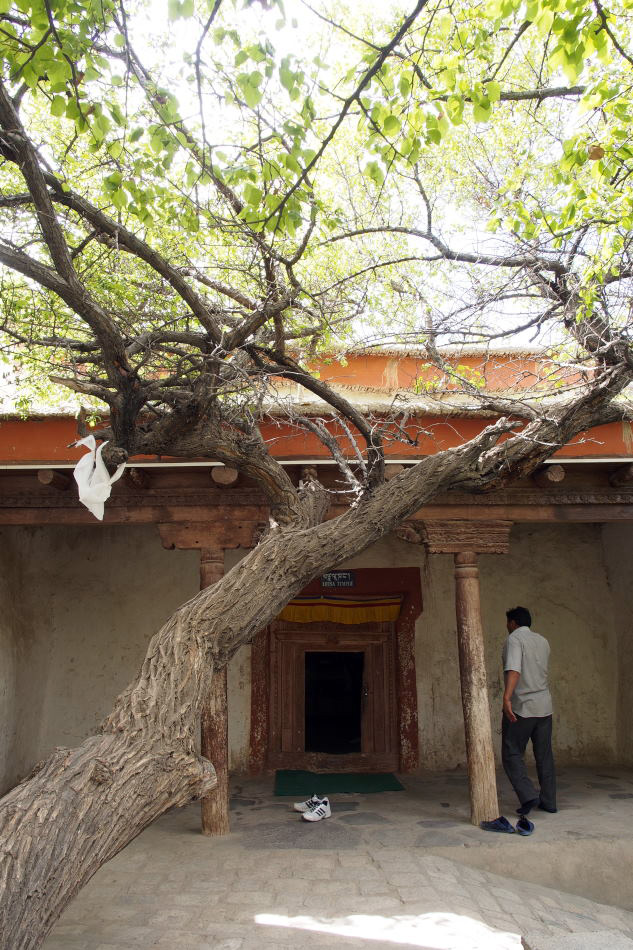 Entrance into one of the two shrines at a garden near the Dukhang of Alchi.

The oldest stupas (chorten) at Alchi dated back as far as the 13th century.

A mother and daughter at a prayer wheel at the entrance of Alchi.

We arrived at Likir in late afternoon.

The Buddhist school complex across from the statue of Maitreya Buddha.

The 23m Maitreya Buddha could be seen from far away.

Entrance to one of the two main assembly hall at Likir.

Inside the assembly hall, yellow ropes of each lama were folded neatly on the rows of seating.

Hundreds of ancient Buddhist texts were stored in glass cabinets against the wall of the assembly hall. 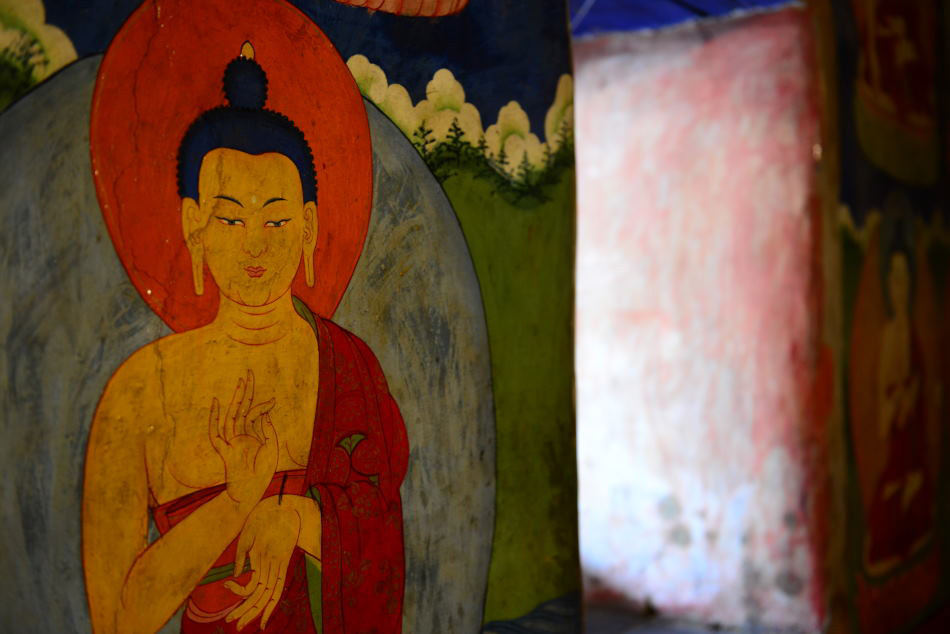 Detail of an old wall painting. 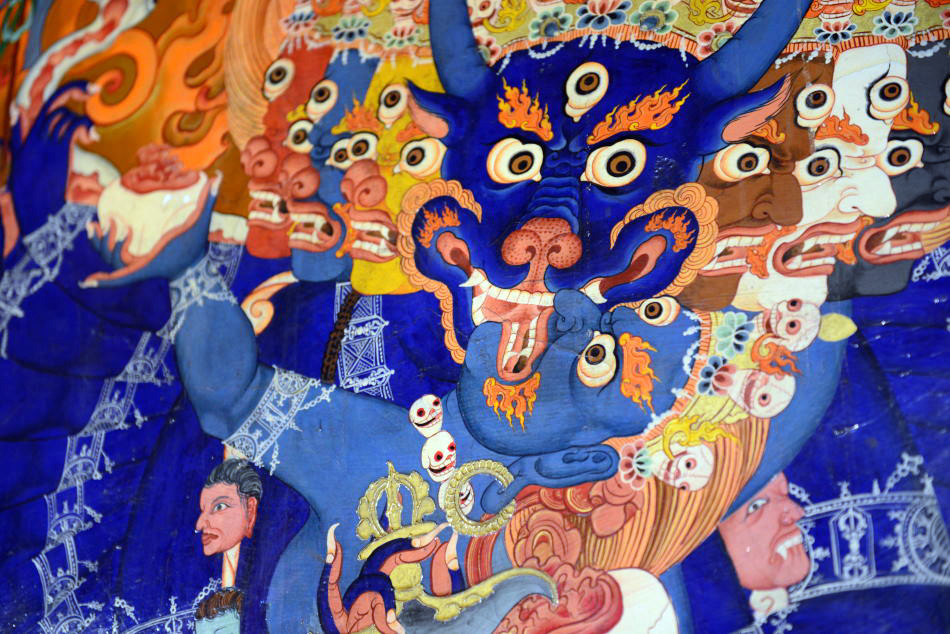 Detail of a new and glossy Mahakala wall painting at the other assembly hall.

Photo of Likir Gompa from distance. 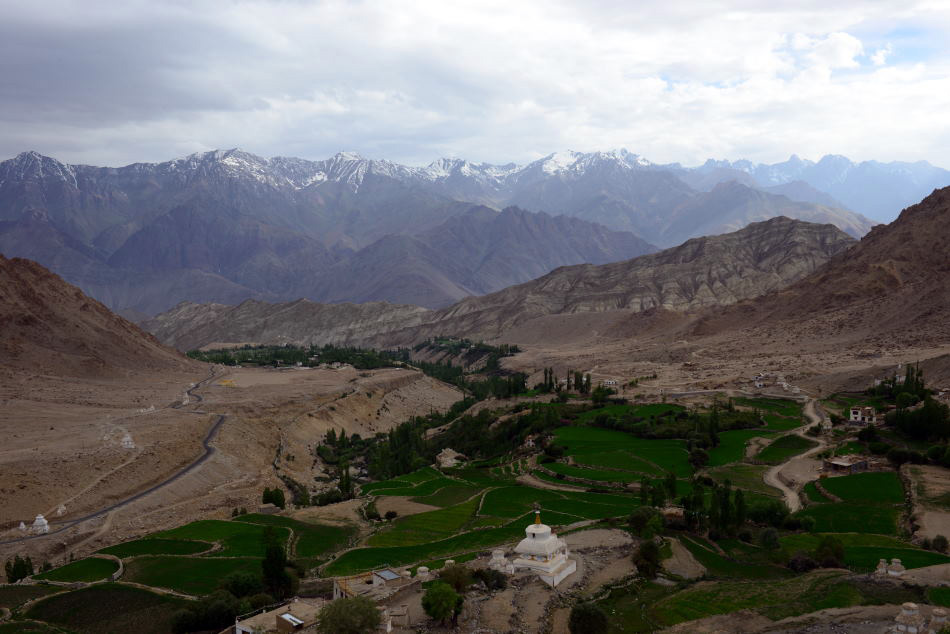 The main courtyard of Likir as seen from rooftop.

Likir wasn’t a popular destination comparing to Alchi or Lamayuru.  We could hardly see any visitors in the monastery and the entrance plaza was also empty.