We left Hotel Ladakh Greens at around 5:45am to embark on our day-long exploration of Tibetan monasteries in the Indus River Valley southeast of Leh.  Our first stop was Thiksey Gompa, the only lamasery in the area allowing visitors to attend their morning prayers.  We arrived at Thiksey slightly after 7am, and hastily walked up the exterior terraces to look for the main prayer hall.  The session had already started as we could hear Buddhist chanting and the sounds of drum.  We followed the sound of prayers up various stairs until finally reaching the entry of the main prayer hall at a covered terrace overlooking Thiksey village.

Inside the hall, about two dozens of lamas sat in several rows of carpeted platforms.  An European couple with their guide arrived before us were sitting in the back row against the wall of Buddhist murals.  We entered the hall and followed suit.  The rhythmical chanting of the lamas sounded like a soothing song reverberating under the old timber structure and suspended thangka banners.  The stress of our hasty arrival was soon calmed down.  A few more tourists soon arrived and joined us at the back row.  We sat quietly and witnessed the lamas chanted, drank butter tea, and had their breakfast porridge.  Lamas of different age groups seemed playing different roles.  Some younger lamas were drummers while others helped serving butter tea.  We were also offered butter tea during the session.

The prayer session lasted till about 8am.  By the time the last chant stopped, we were the only tourists left in the hall.  One by one the lama exited the prayer hall except one lama.  He was kind enough to show us around the hall, and led us to the back chamber where a number of Buddhist statues stood behind offering tables.  Outside the prayer hall, the land was warming up as the sun was already quite high up in the sky.  We walked back down to the main assembly courtyard where workers were repainting the colourful external walls.  At one end of the courtyard there was a building with its doors opened.  Peeking through the door we could see the side profile of Maitreya Buddha statue.  The 2-storey tall golden Maitreya Buddha was a well known feature of Thiksey.  The Maitreya Temple and its statue were erected in 1970 to commemorate the visit of the 14th Dalai Lama.

The visit of this famous Gelug sect (Yellow Hat sect) lamasery was a delightful start for our long day of monasteries hopping in the Indus River Valley.  The morning prayers was definitely one of the most memorable moments of our Ladakh trip.  Before leaving Thiksey, we stopped by a decent eatery at the monastery entrance for breakfast. 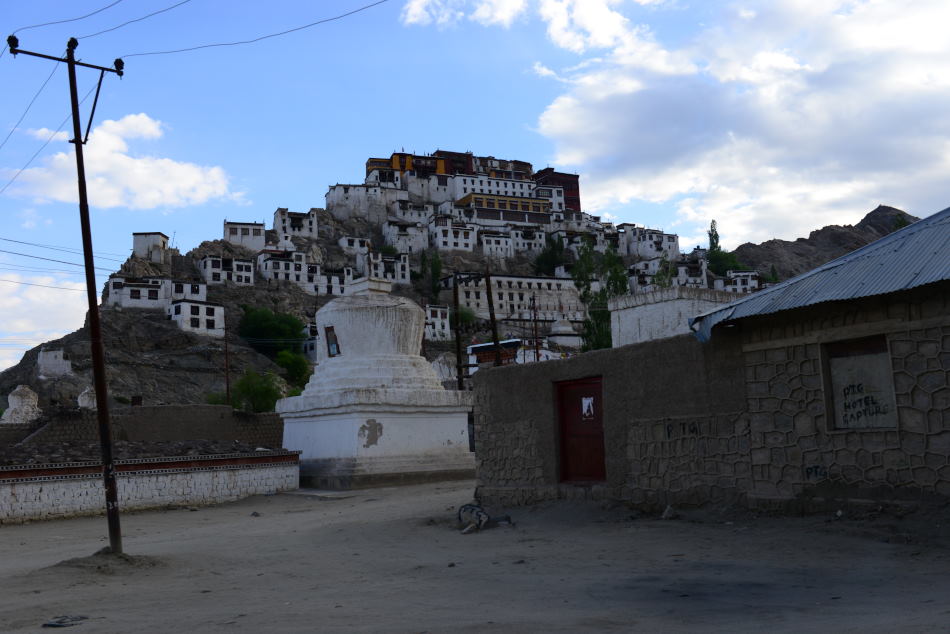 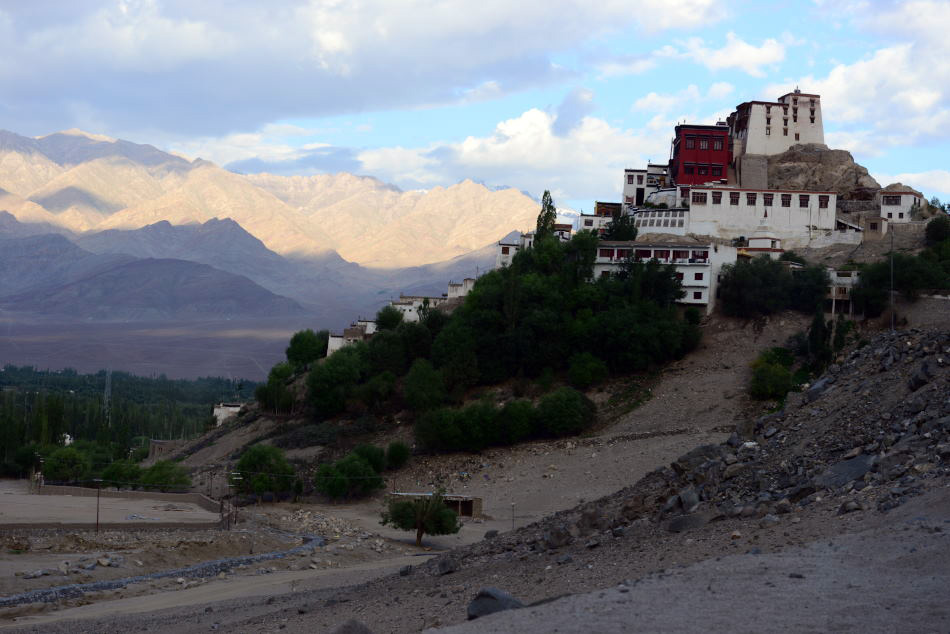 Thiksey Gompa against a beautiful backdrop in early morning. 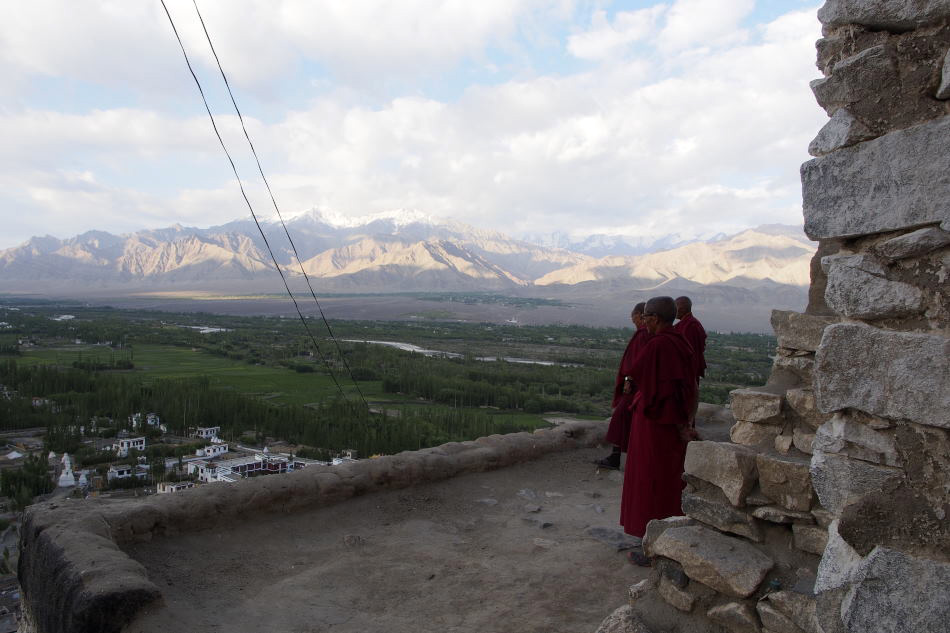 We didn’t know how we could find our way to the main prayer hall. We followed the chanting and climbed up numerous stairs and terraces. Half way through, we met three senior monks who were also making their way up.  They took their time and walked leisurely.  At one point, they stopped at a terrace to admire the amazing view. 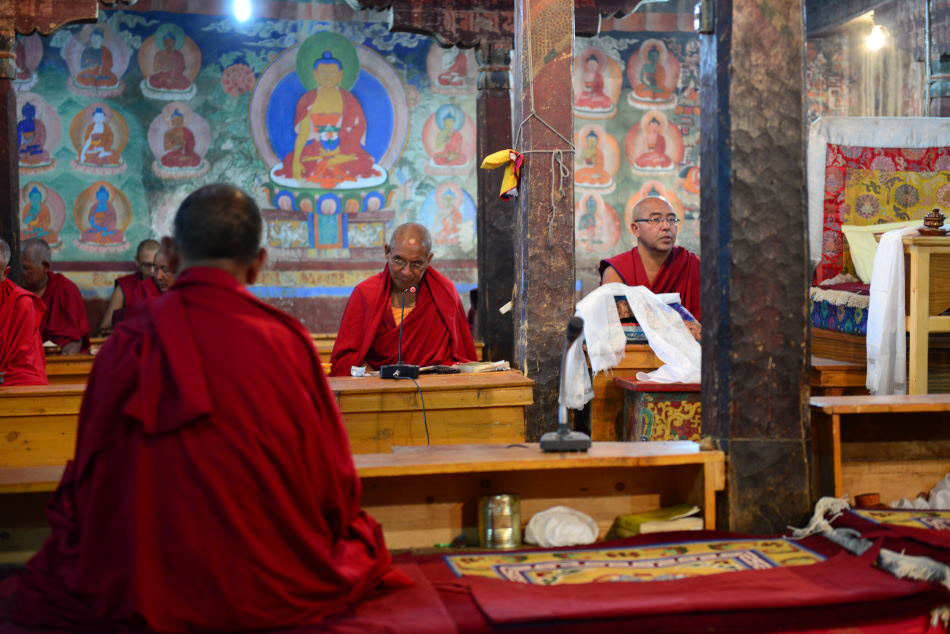 They chanted, stopped, then chanted, then stopped again for a break of butter tea, or a bowl of simple breakfast. 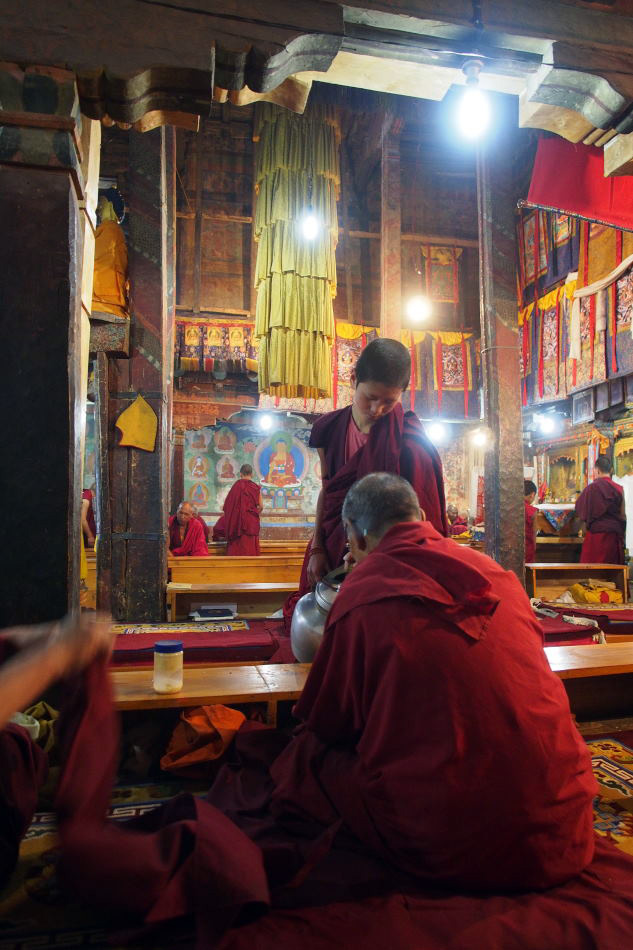 The younger monks served butter tea at regular intervals to everyone, including us, between chanting sessions. 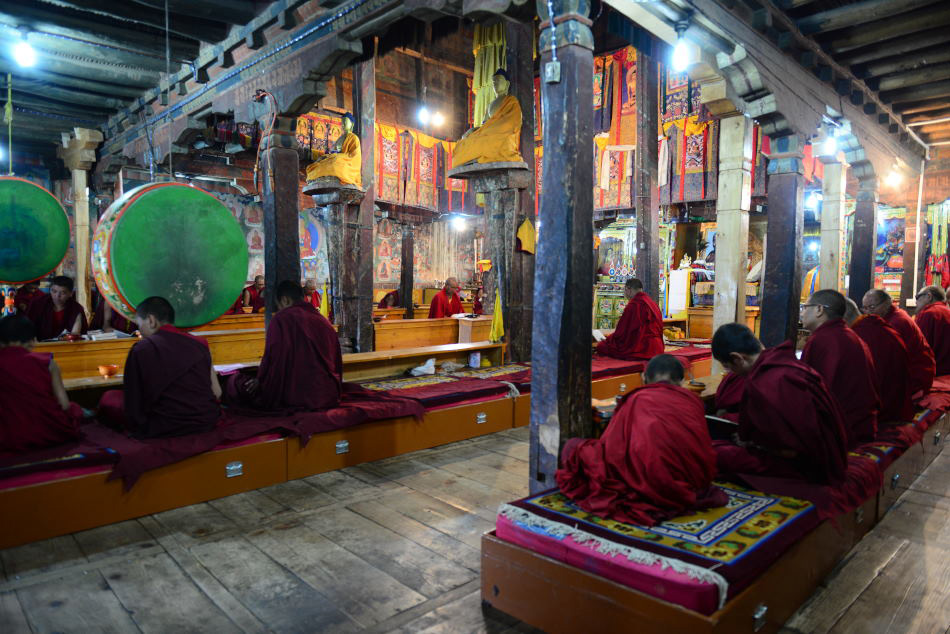 Lamas of various age groups were present at the morning prayers. 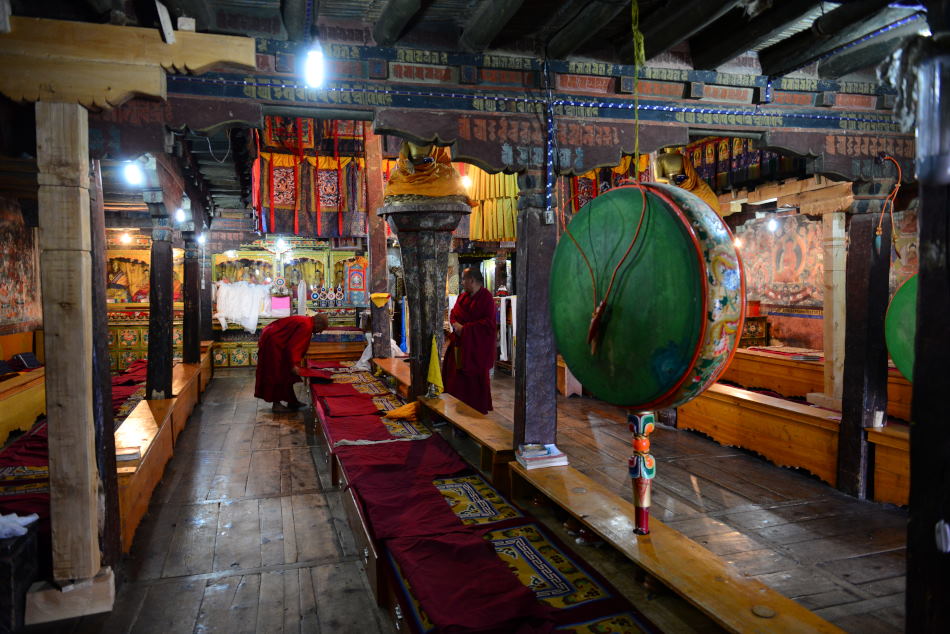 After morning prayers, almost everyone left the hall except a caretaker lama and us. 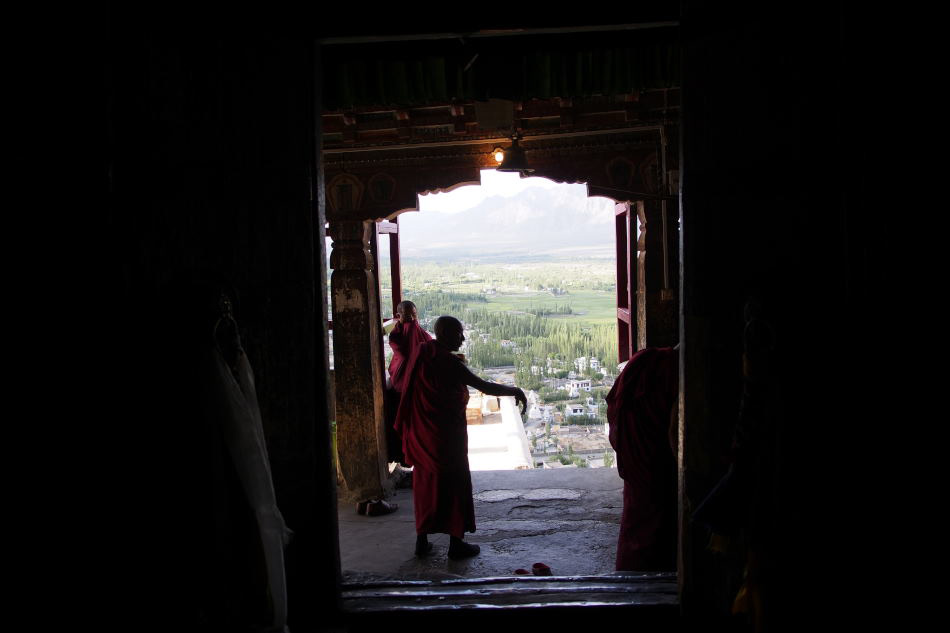 We were the only tourists who stayed till the end.  We stayed behind and the kind caretaker lama let us wander around the prayer hall before locking up the doors. 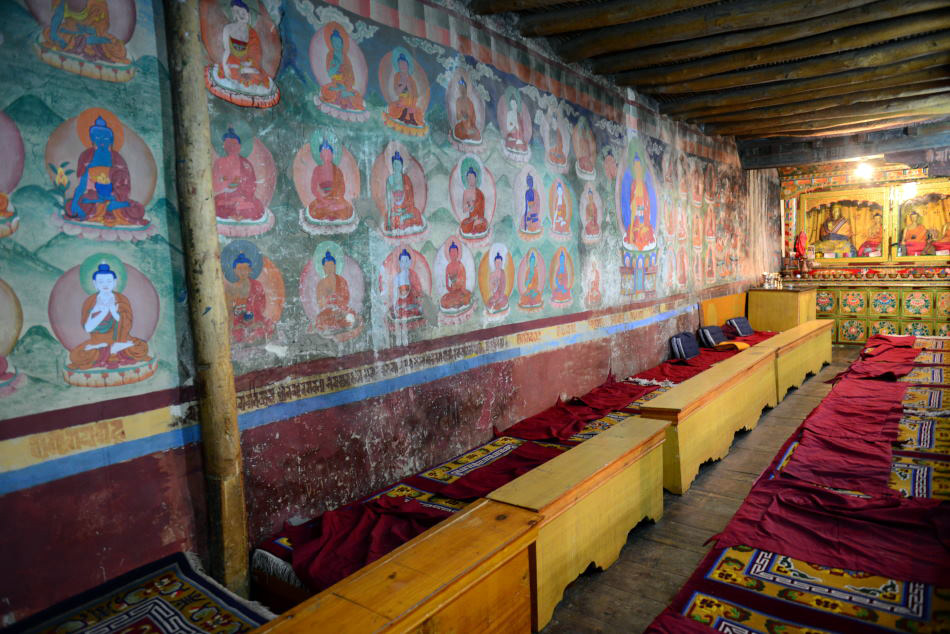 Buddhist murals at the prayer hall. 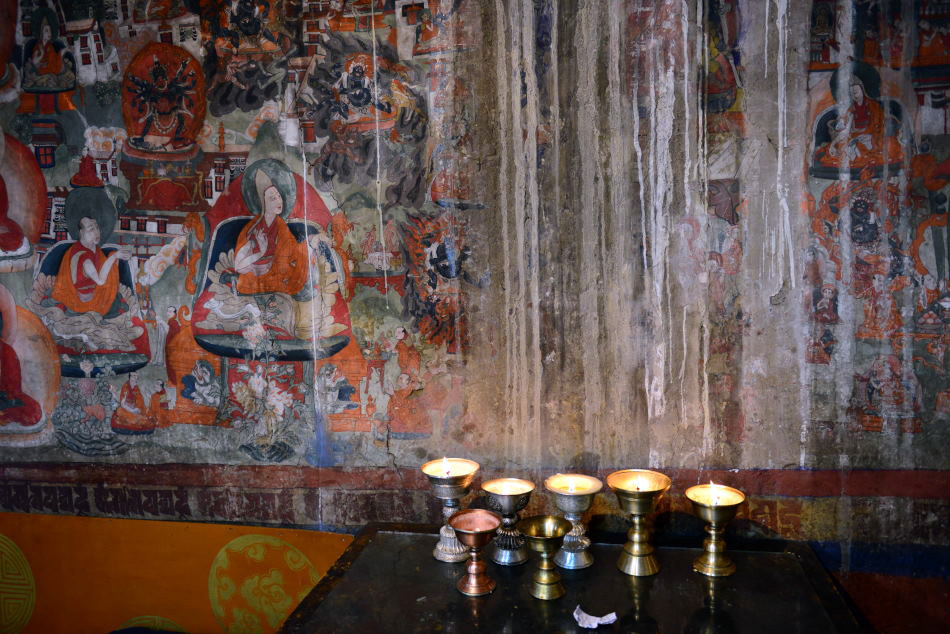 Some of the murals were in need of restoration. 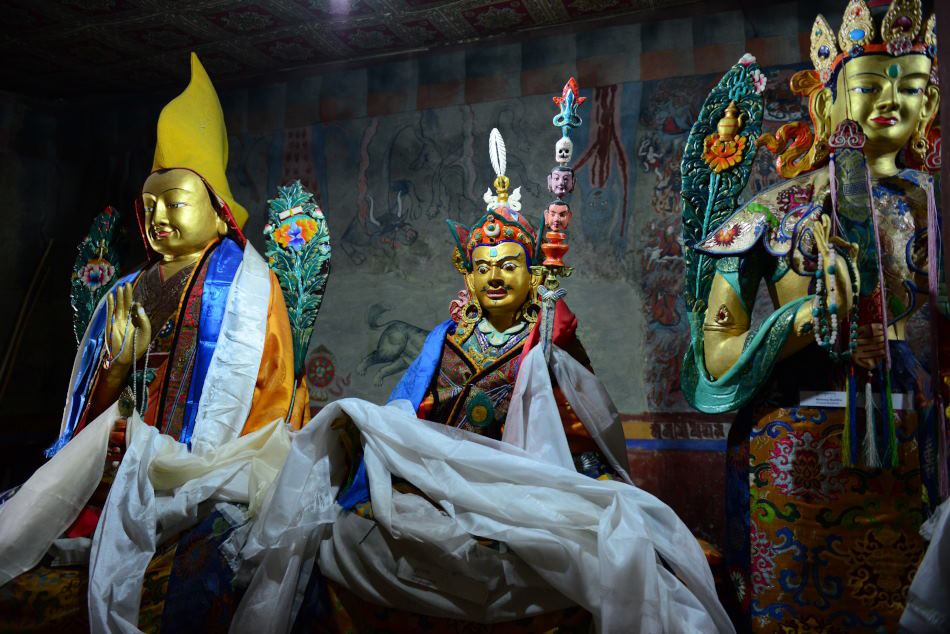 The statues in the inner chamber of the prayer hall. 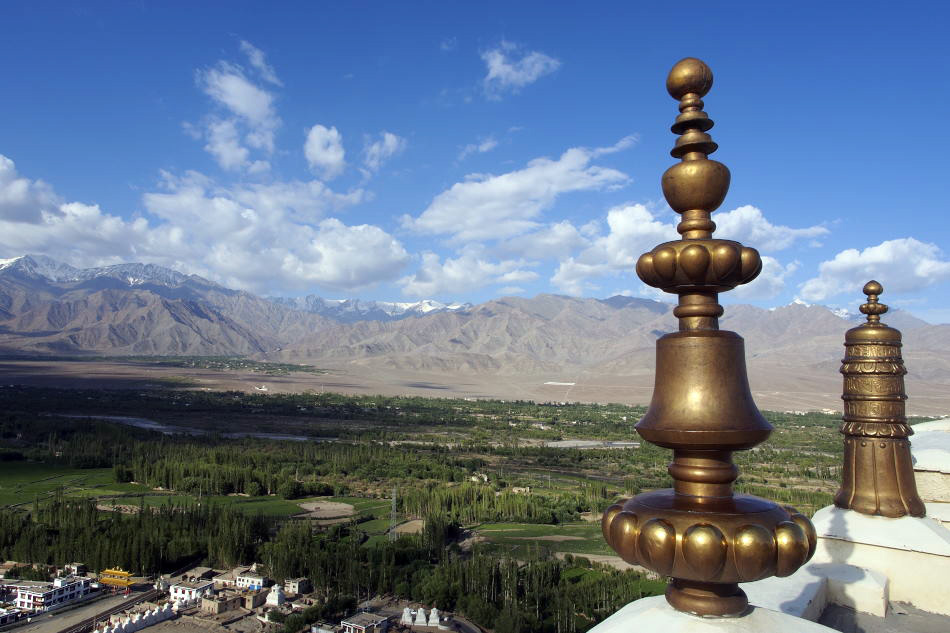 The sun was quite high up after the morning prayers.  We walked up to the roof terraces for great views of surrounding landscape. 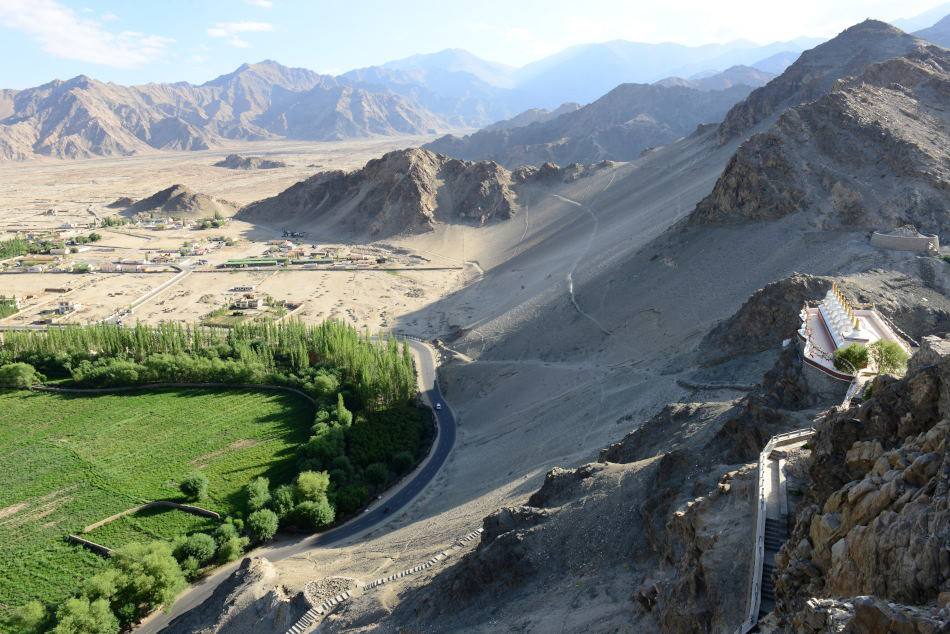 Looking down towards the main road and the group of stupas downhill. 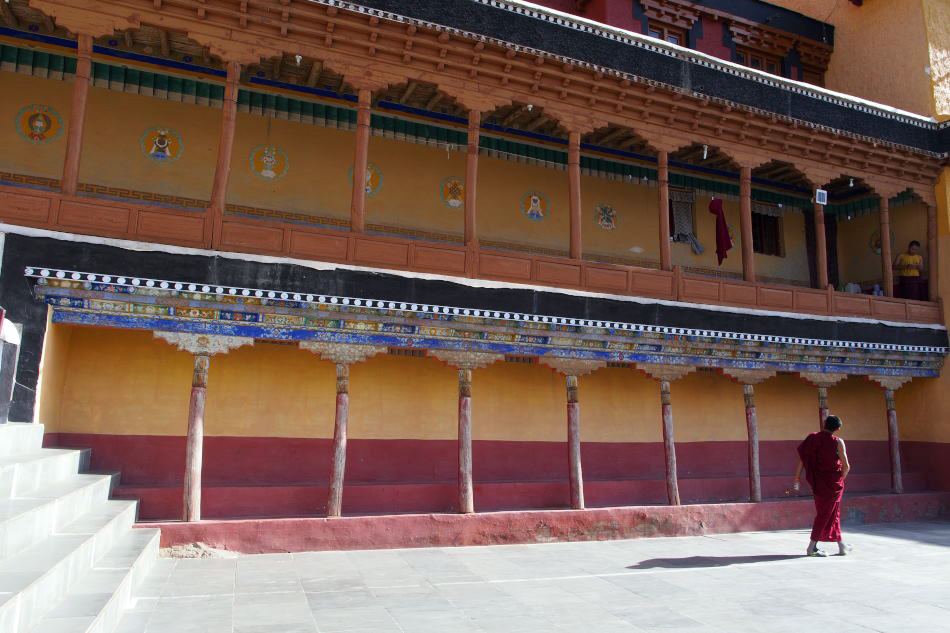 Lama at the main assembly courtyard. 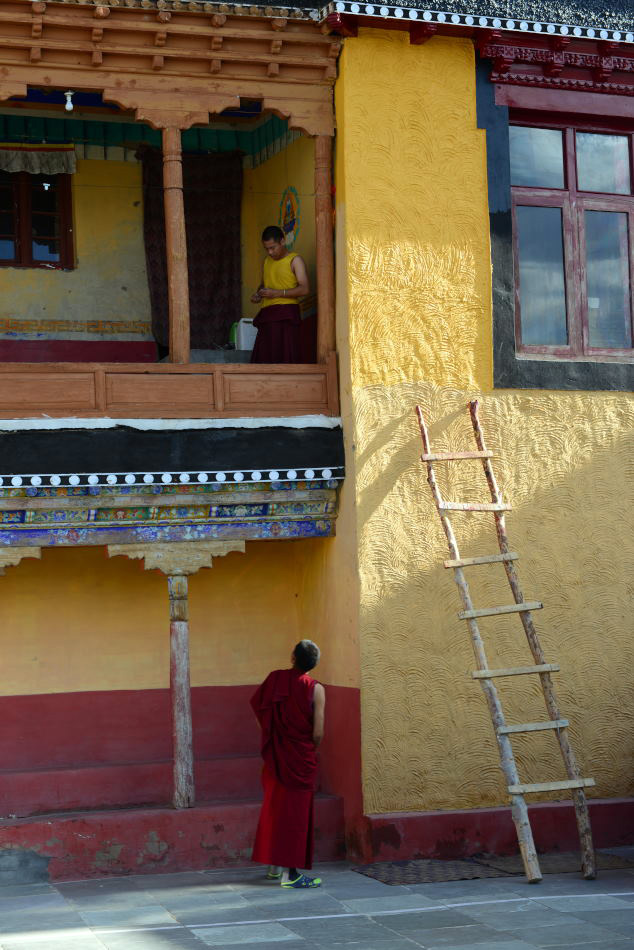 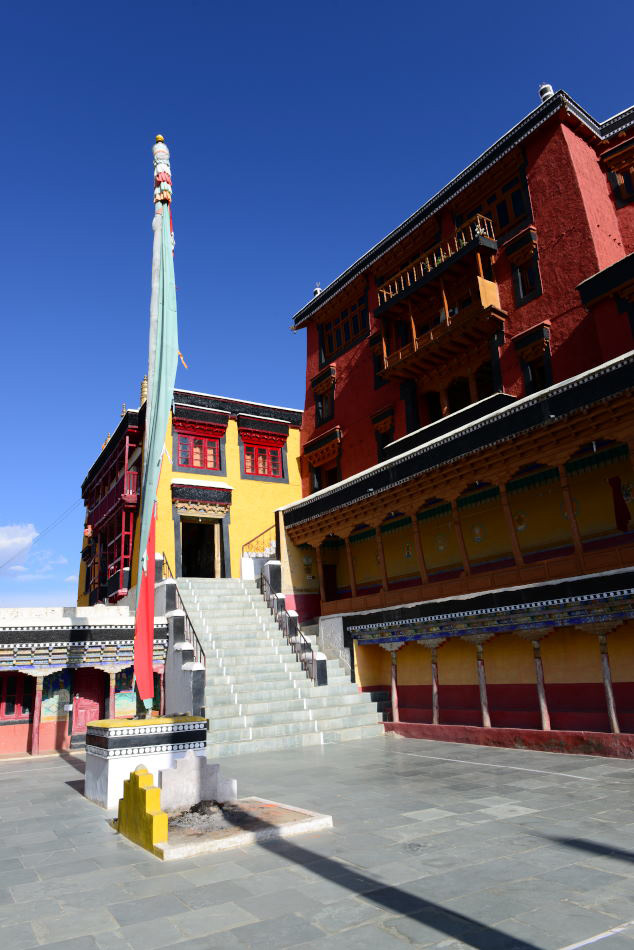 The assembly courtyard and assembly hall of Thiksey. 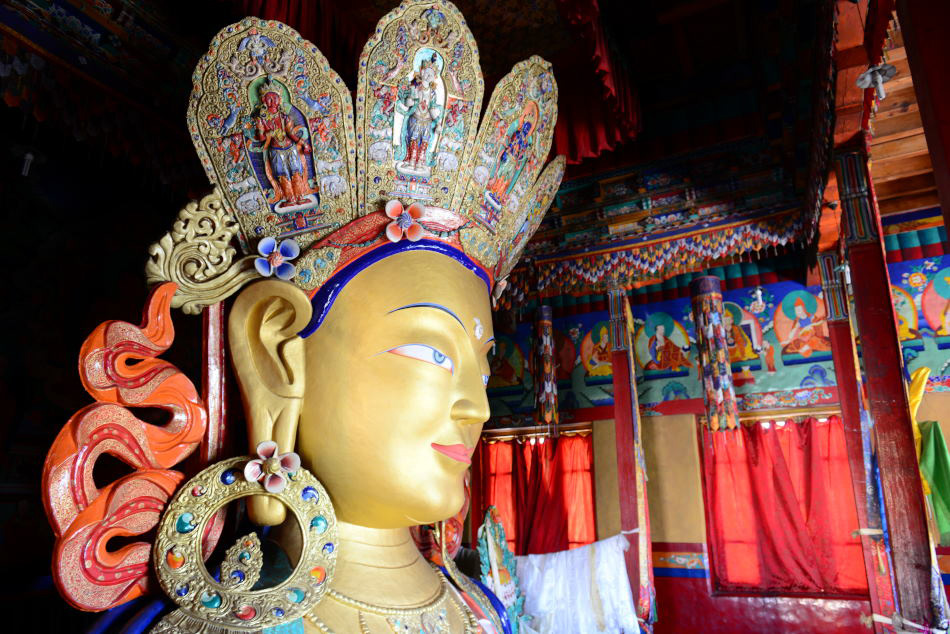 We entered the temple which housed a giant statue of Maitreya (future Buddha). 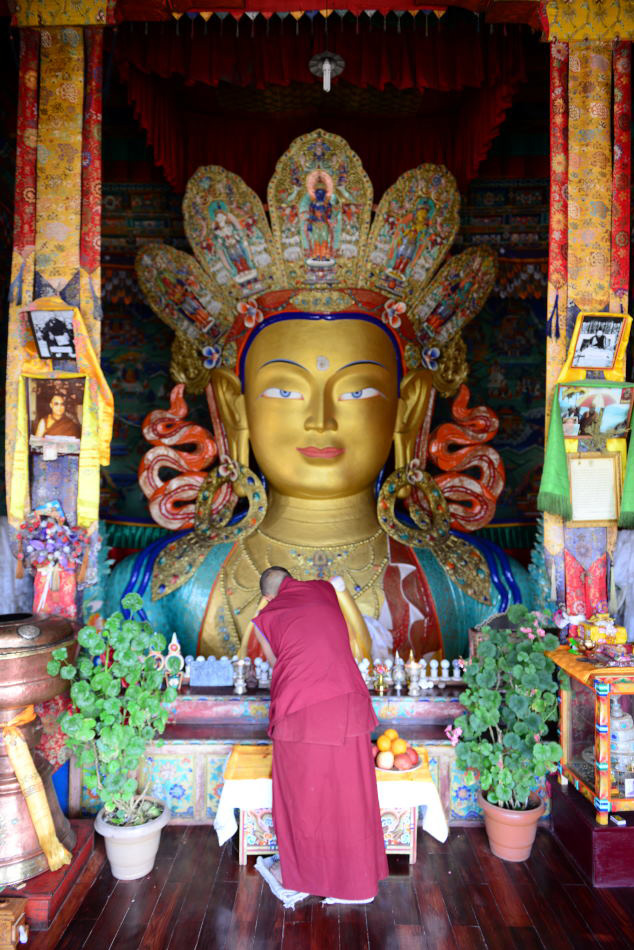 Every room we visited at Thiksey was very well maintained. 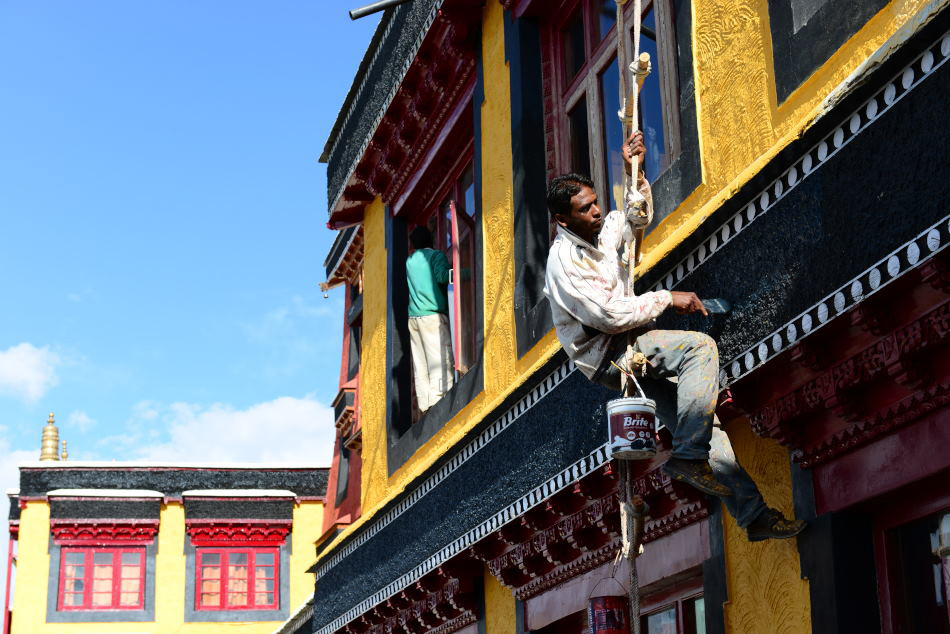 Worker painting the exterior wall of the monastery. 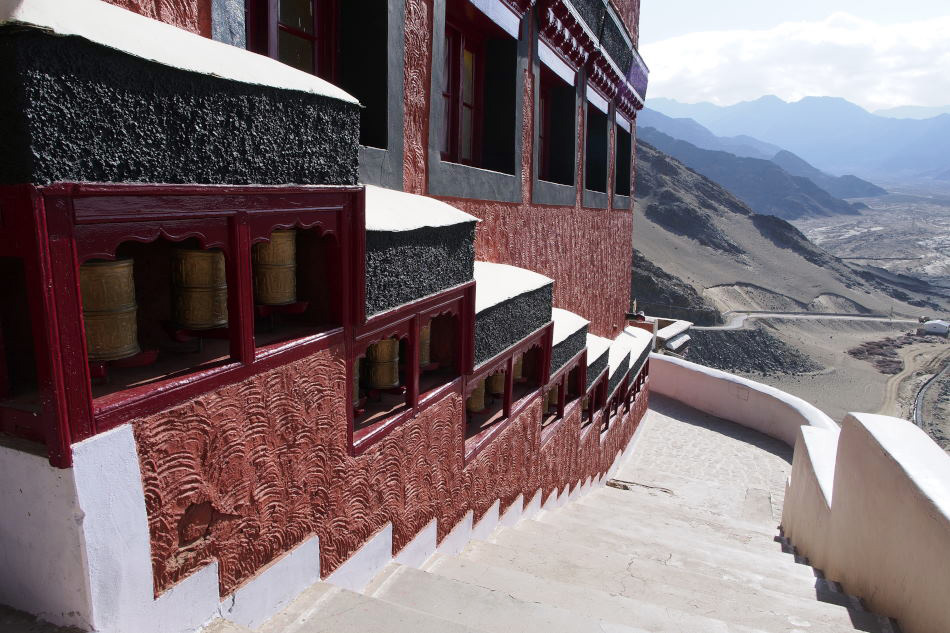 The prayer wheel along the entry stair. 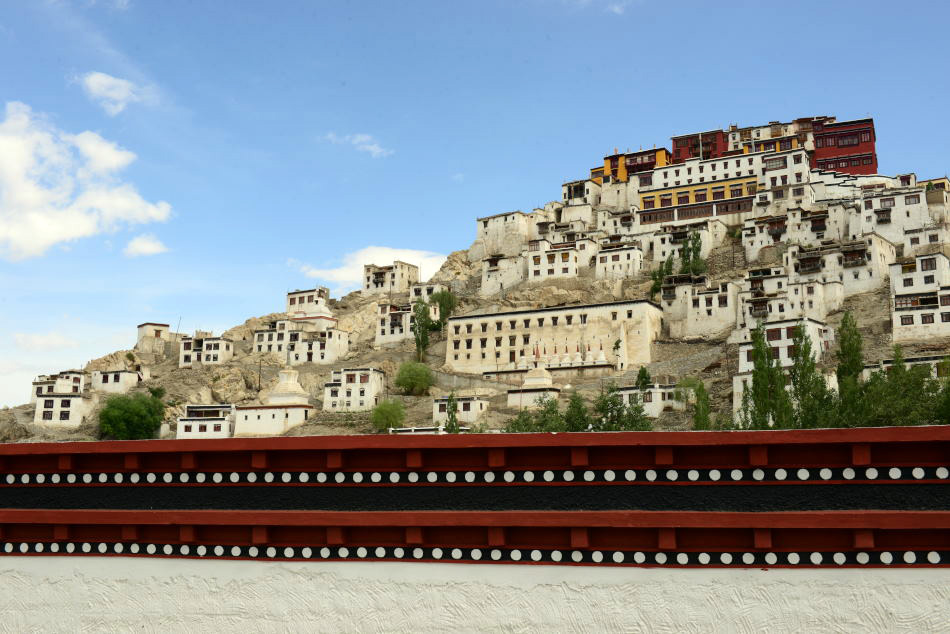 The dramatic view of Thiksey Gompa has become an iconic image of Ladakh, appearing on various marketing mediums for tourism in the region.