After Namgyal Tsemo Gompa, the taxi dropped us off at the main bazaar.  From there, we walked into an alleyway next to the mosque Jama Masjid which led us to another part of the old city.  At a street corner we saw a two-story house with an interesting facade.  The sign “Lala’s cafe” was hung above the entrance.  We walked up the wood stairs  to the second floor where the cafe was located.  It was hot, dusty and dry outside but inside the cafe it was nice and cool.  We sat down at a cushioned area, ordered two cups of tea and checked out the postcards and handcrafts on display.  We were the only visitors in the cafe until another couple came in and joined our table.  They were Sunny and Ann, an Indian and Taiwanese couple who came to Ladakh for trekking.  We four had a pleasant chat.  An hour easily passed before we decided to move on for our day.  Outside the cafe, we took a few pictures of the small but interesting cafe building, which was once the old Sankar Monastery Labrang saved from demolition back in 2006.  Despite the heat, the street outside Lala’s Cafe was full of neighborhood life: barber shop, tailor shop, cloth dyeing shop, eateries, and of course souvenir shops as well as Buddhist stupas.

Off the busy Fort Road in a small alleyway there was a popular restaurant called Tibetan Kitchen.  Recommended by Sophia, fellow traveler that we met the day before at Gesmo Restaurant, we were keen to try out some authentic local food at Tibetan Kitchen.  Because of the noontime heat, instead of tables at the entrance courtyard we chose a table inside the restaurant close to a painting of Lhasa’s Potala Palace.  The staff were friendly, especially the owner who spoke perfect English with the British ascent.  He suggested us to try the bottom fried lamb momos and hot Tibetan soup.  It was a delightful and tasty meal.

The sun was strong at late morning, prompting us to seek for shelter at Lala’s Cafe. 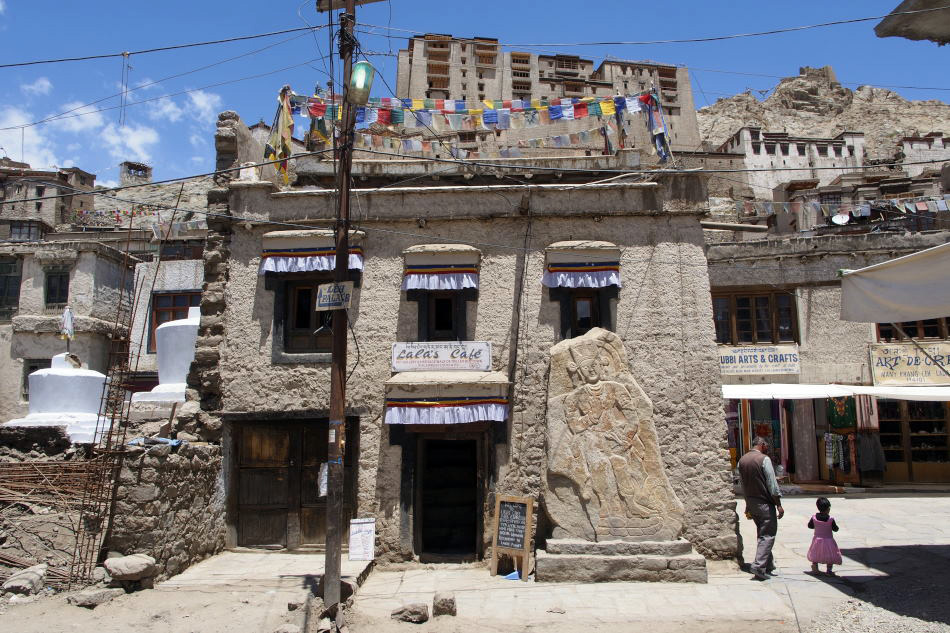 Lala’s Cafe is located right below the Leh Palace.

The interior decor of Lala’s cafe was simple but comfortable.  Customers could choose to either sit at the cushioned areas on the second floor or the rooftop.

Lala’s Cafe was once the old Sankar Monastery Labrang but saved from demolition back in 2006.  It stood alone at a street corner when the adjacent buildings had been demolished.

A local tailor was busy with sewing. 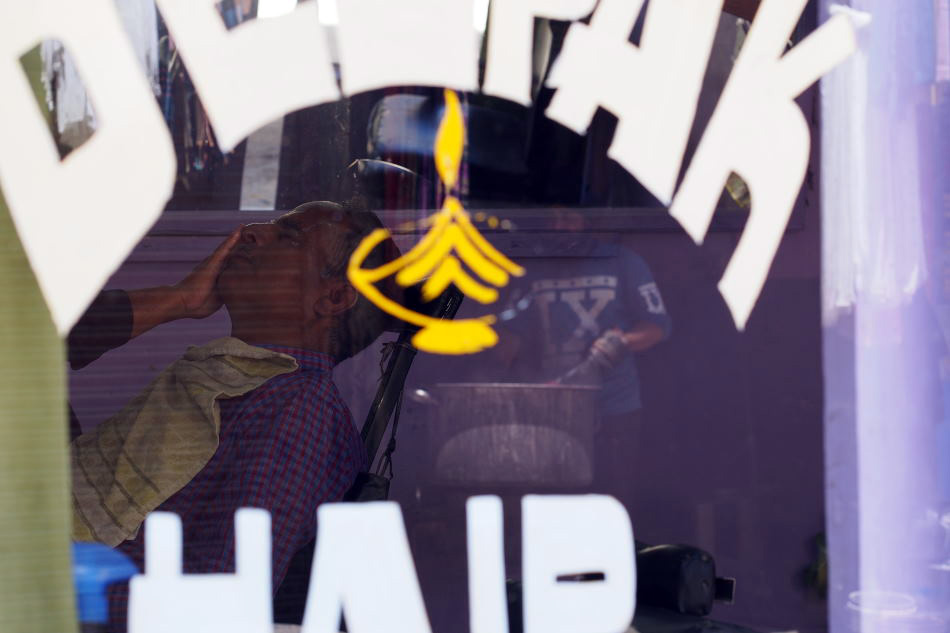 Peeking into the window of a barber shop. 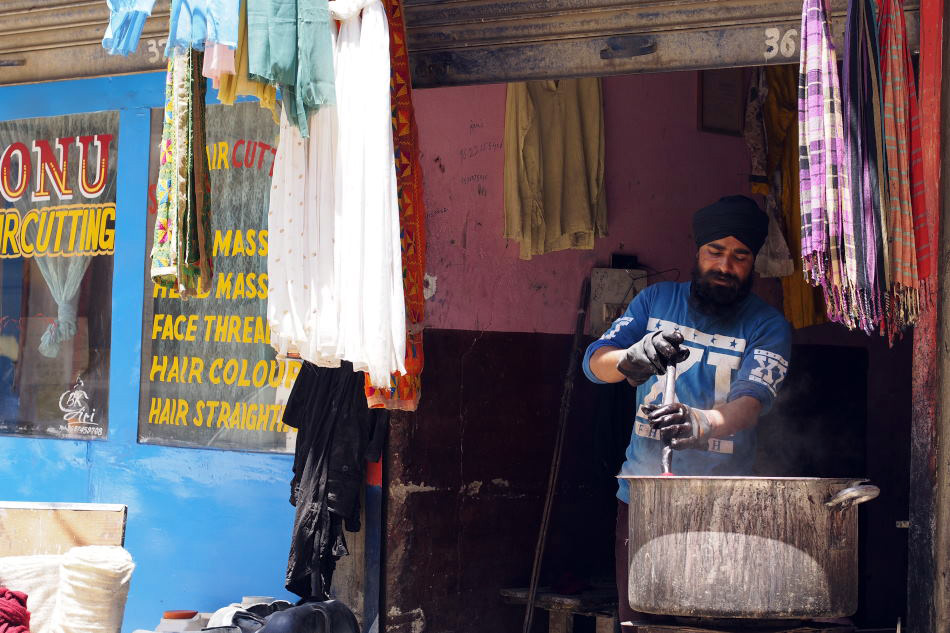 A man dying fabric in front of his shop.

A snapshot of a passerby walking along the alleyway near Lala’s Cafe.

Tibetan Kitchen was not far from Gesmo Restaurant, where we met the Spanish traveler Sophia the day before.

At Tibetan Kitchen, we sat near a painting of Lhasa’s Potala Palace.

The interior of Tibetan Kitchen was decorated with photos of Tibetan landscapes and the Dali Lama, Tibetan flag and Oriental lanterns. 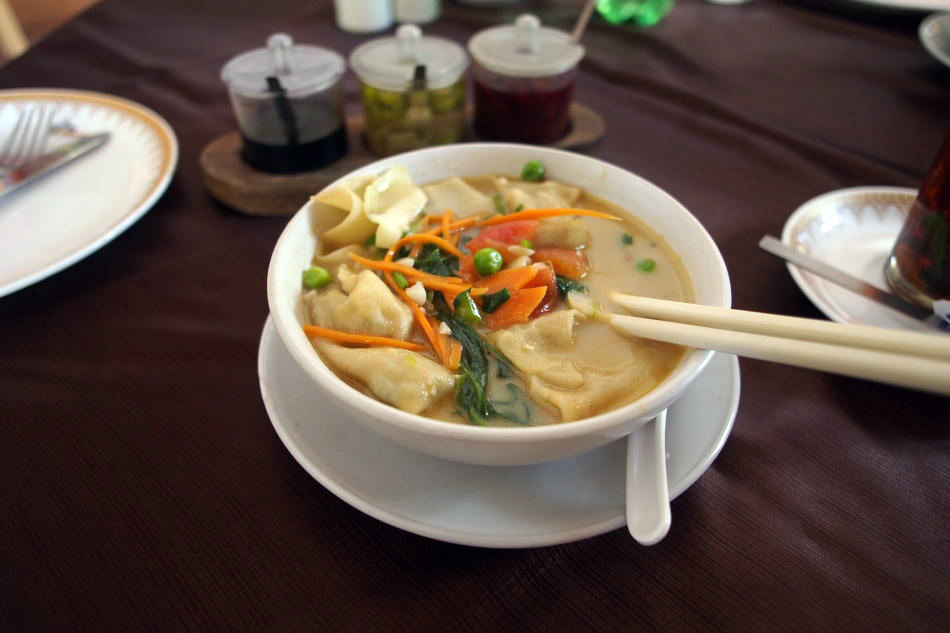