After Majianlong, our hired driver Kwan drove further southwest to Jinjiangli Village, near the town of Xian Gang.  Jinjiangli is relatively less visited by tourists because of its distance from Chikan.  We went here specifically to see Ruishi Diaolou (瑞石樓), the tallest diaolou in Kaiping.  Ruishi Diaolou is still privately owned.  We were fortunate that someone from the owner’s family was there when we went to Jinjiangli, who was willing to open the door for us with a fee.

With 9 storeys at a height of 25m, Ruishi Diaolou (瑞石樓) was built between 1923 to 1925.  The owner was a Hong Kong businessman named Wong.  The tower was structurally constructed in reinforced concrete.  Building material in China was scarce back then, Wong imported the concrete, steel rebars, glass, and timber from Hong Kong and transported up to the site via canals.  The diaolou was a mixture of architectural styles, including Roman, Byzantine, Baroque and Chinese influences.  From the living room on ground floor, we walked up the stair to visit every single floor.  The second to sixth floors were similar, with bedrooms, kitchens and bathrooms.  The seventh housed a semi-outdoor terrace, the eighth an ancestral hall, and the ninth a watchtower.  The view from the top of Ruishi Diaolou to the surrounding diaolous, village homes, bamboo forest, and distant rolling hills was marvelous.

At Jinjiangli, we also passed by the other two diaolous, the Shengfeng Diaolou (升峰樓) and Jinjiang Diaolou (錦江樓).  Shengfeng was built in 1928, again using reinforced concrete.  It featured a fusion of Indian and South Asian architectural styles.  Jinjiang Dialou was built in 1918.  We didn’t stay long at Jinjiangli because we needed to catch an afternoon bus to Guangzhou.  The tour of Jinjiangli concluded our visit of Kaiping Diaolous.  Other than its photogenic qualities, the diaolous are highly valuable in documenting an era of interesting social and architectural phenomenon, when thousands of Chinese from this region of Guangdong left their homes to work and lived in the West.  Some settled permanently on foreign soil, but showed affection to their homeland by building these unique fusion architecture throughout Kaiping; while some others returned from the West with new architectural visions, and also resulted in erecting their unique versions of diaolous.

After Jinjiangli, Kwan drove us all the way to the bus terminal at Kaiping.  We were grateful to have Kwan as our driver.  Without him, we weren’t able to reach Majianlong and Jinjiangli in half day’s time.  We left Kaiping with the 3pm bus to Guangzhou.

Another scene of Chinese rural setting greeted us at the entrance of Jinjiangli Village.

The gateway of Ruishi Diaolou, with Shengfeng Diaolou and Jinjiang Diaolou at the background.

Ruishi Diaolou is the tallest tower in Kaiping. 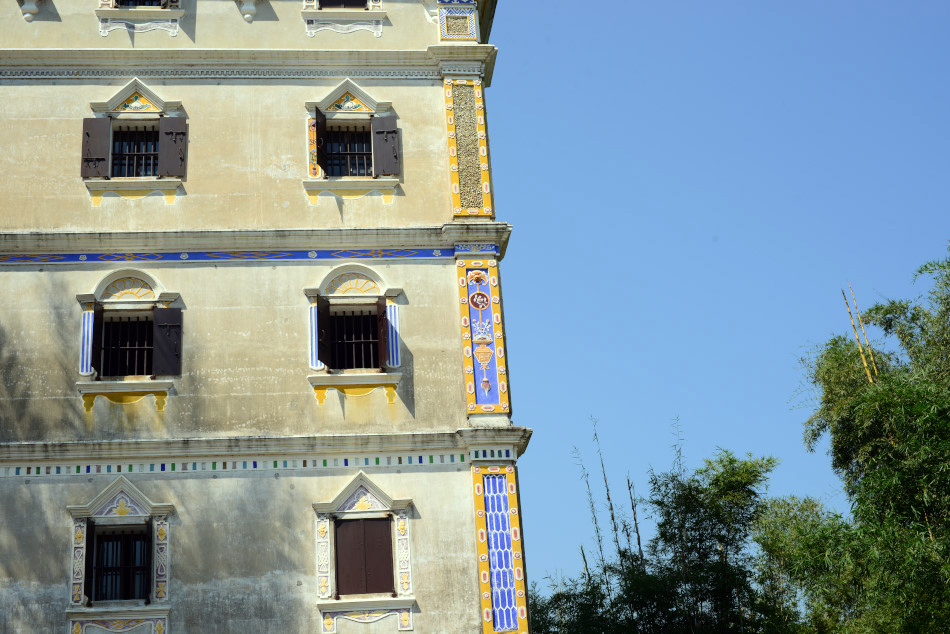 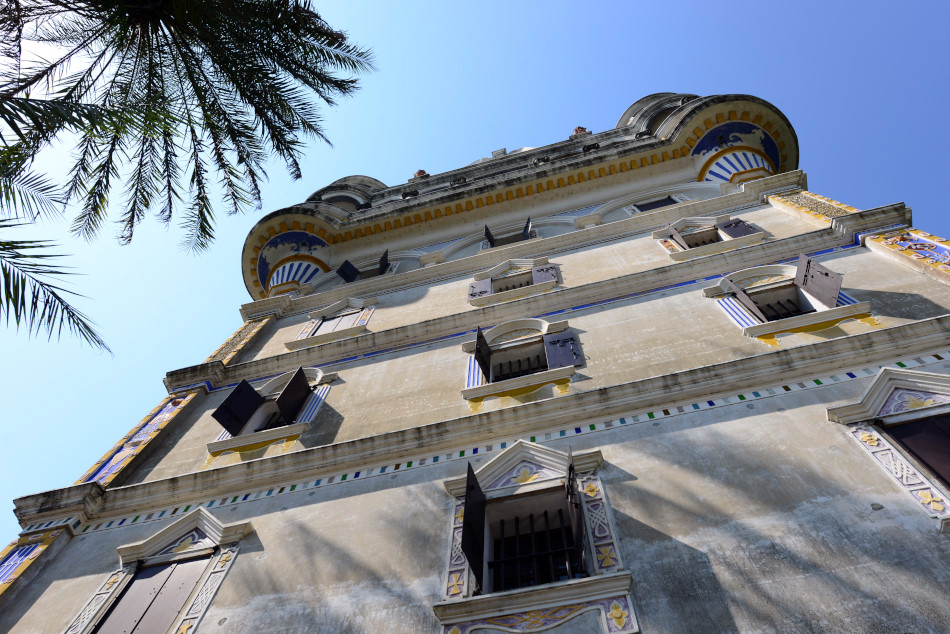 The vivid colours of Ruishi Diaolou looked a little funny.

Photograph of Ruishi Diaolou before its new paint.

In many floors there would be a common space, with bedrooms flanking both sides.

Old photos of the owner’s family were allover the interior. 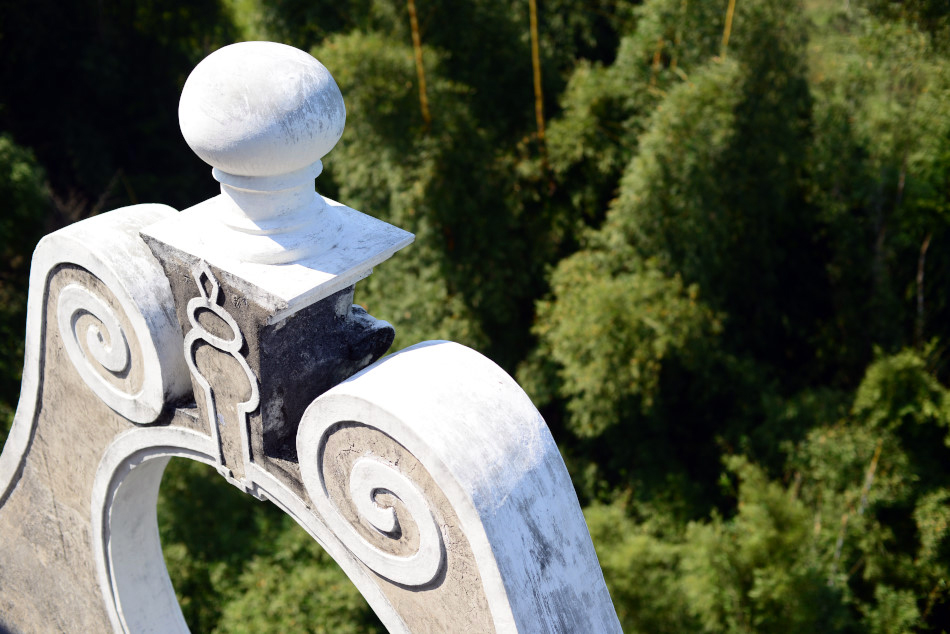 Baroque details near the roof against a bamboo forest. 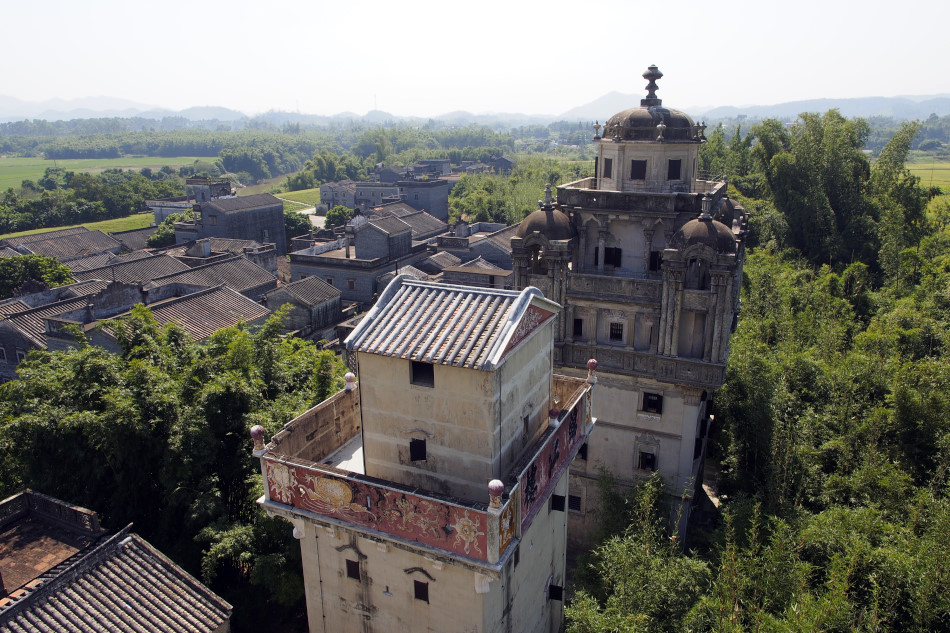 The Shengfeng Diaolou was heavily influenced by Indian architecture.

Final view of Ruishi Diaolou after we returned to the ground.

Closeup of the architectural details of Shengfeng Diaolou.