The next morning, we took a local bus to Chikan again for another half day of diaolou tour.  At Chikan, we found out that the tourist shuttle bus going to Majianlong Village was temporarily suspended due to a damaged road bridge.  Across the canal from Chikan Movie Studio, we stepped in a youth hostel to seek for advise.  The staff was very kind and she suggested us to either rent a bike or hire a car/ driver.  We opted for a local driver because of time constraint.  The driver Mr. Kwan turned out to be nice and talkative.  From the construction of diaolou to the standard of living in the region, Kwan offered us good insights into the history and life in Kaiping.  We requested Kwan taking us to two more villages, Majianlong (馬降龍) and Jinjiangli (錦江里) for diaolou visits.

Due to the damage of the road bridge, Kwan took us on a rural journey via a network of small village roads.  After winding through old villages, fish ponds and rice fields, we finally reached one of the parking lots at Majianlong.  Kwan dropped us off at the village entrance and we ventured into Majianlong on our own.  The area of Majianlong was relatively large, with a few villages clustered within a large expanse of bamboo forest.  Through winding footpaths in the shade of bamboo groves, we visited a number of diaolous in Majianlong.  It was a pleasure to wander in the bamboo forest to look for the diaolous and villas.  Mosquitoes were sometimes a nuisance but in general arriving at each diaolou was like a small discovery in the forest.  Some diaolous were actually opened for visitors, with staff at the entrance checking tickets.  We also visited a privately owned diaolou where a small fee was paid to a lady by the door.  Even more so here than in Zili, the interior of some diaolous were magnificently preserved with antique furniture, beautiful floor tiles and interesting wall motifs.  For a few times we climbed up to a diaolou’s roof terrace to appreciate the scenery of distant hills and bamboo forest, in which nostalgic diaolous stood out from a sea of green. 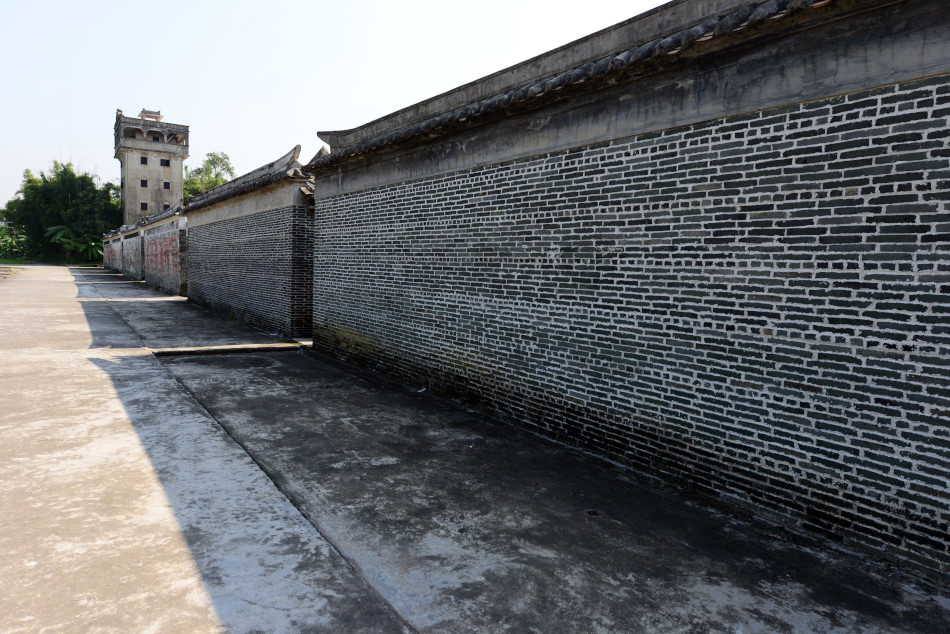 The high walls and diaolou watchtowers reminded visitors of the violent history of the area when banditry was common. 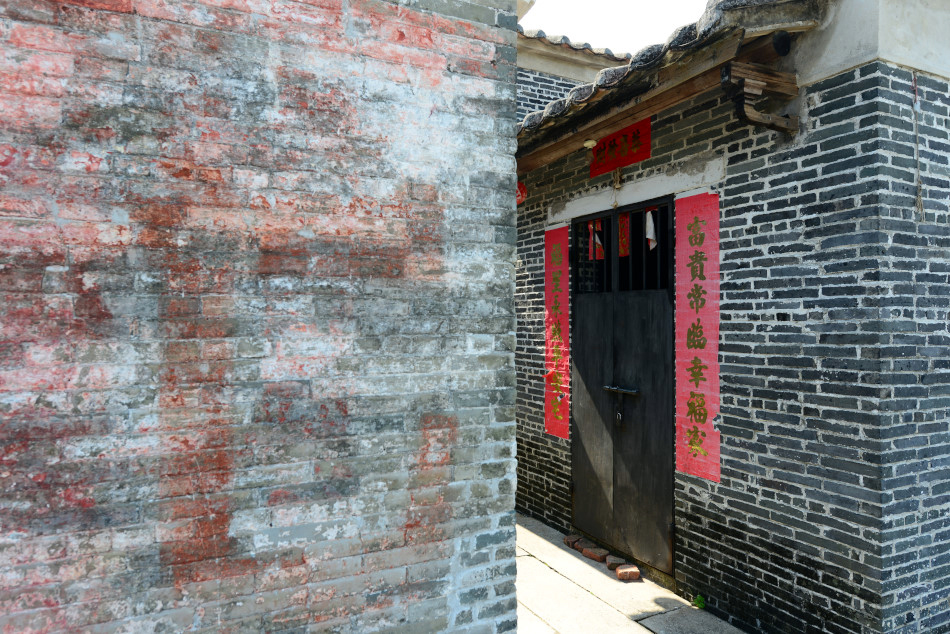 One of the many small lanes leading into the village centre. 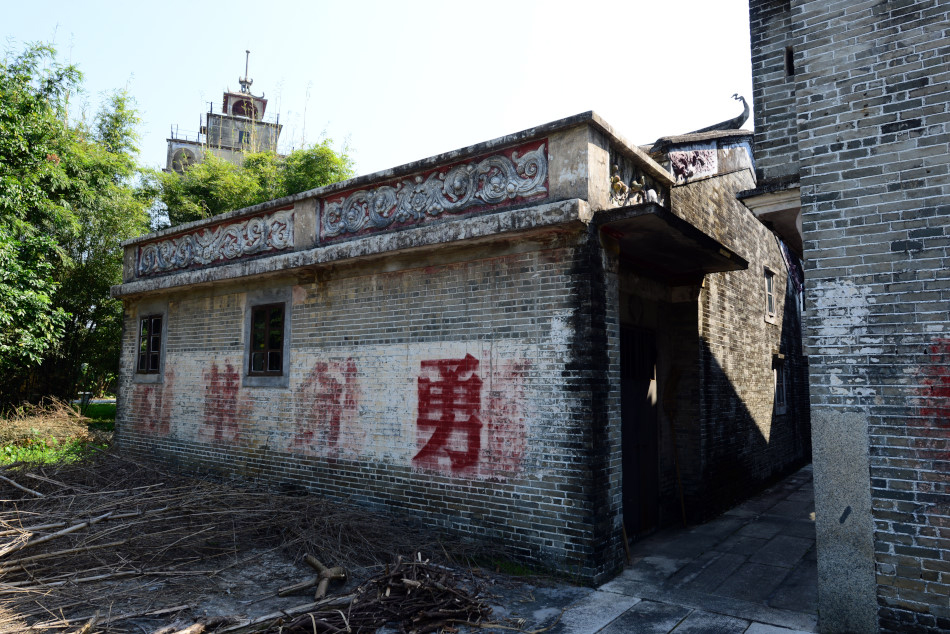 Red painted political slogans could be found on walls of many village homes. 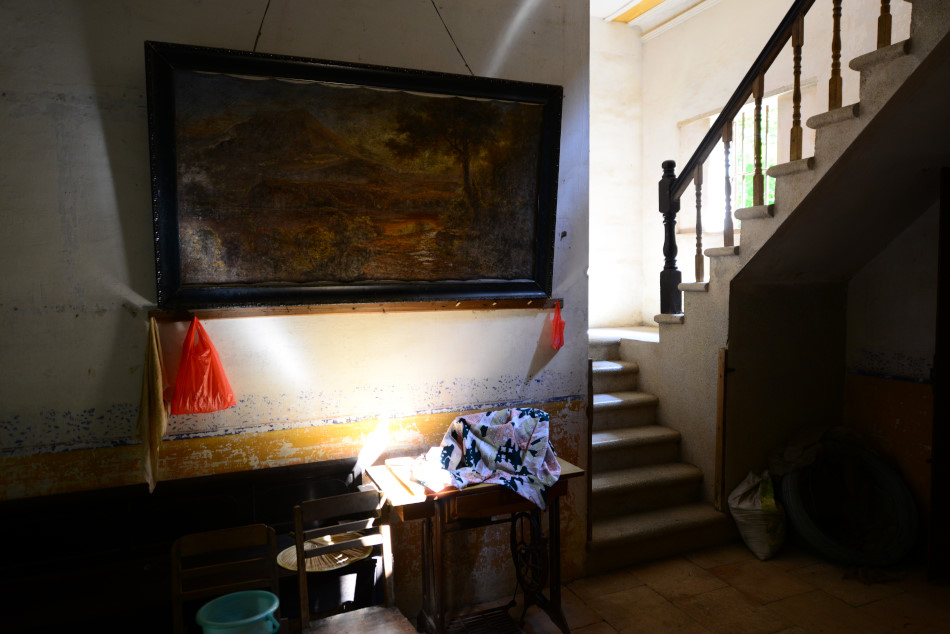 In one of the diaolous we visited, a darkened oil painting was hung in the ground floor living room. 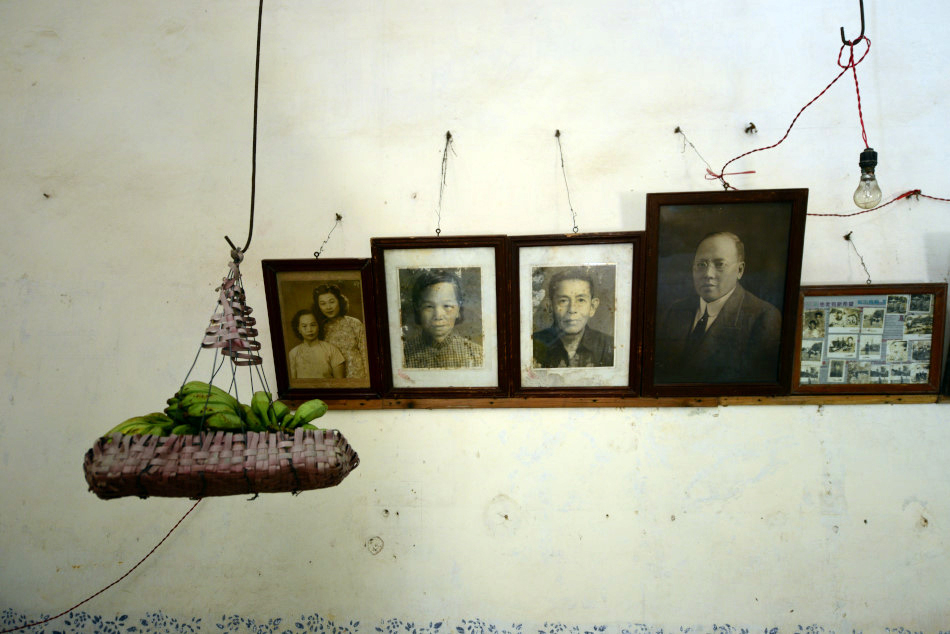 Old black and white photographs of the owner’s ancestors and families in one of the diaolous. 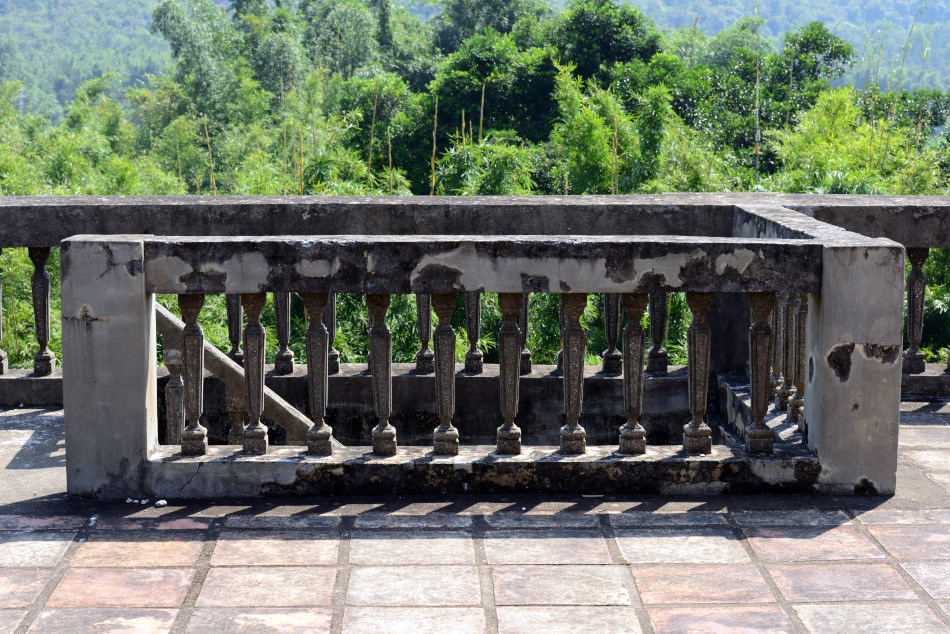 A richly articulated stair led to a diaolou’s rooftop patio. 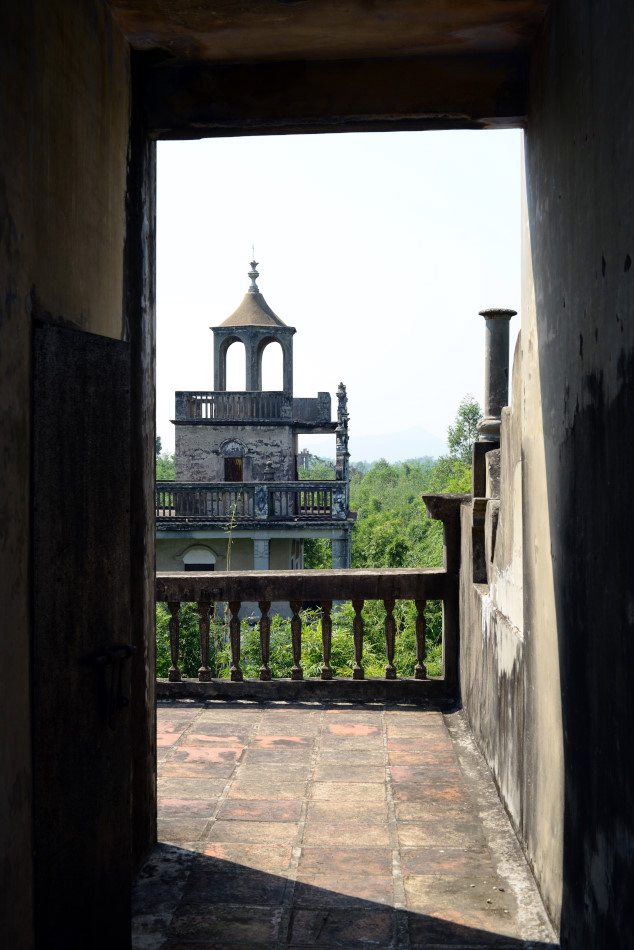 Like Zili, the diaolous in Majianlong presented an interesting fusion of East and West design styles. 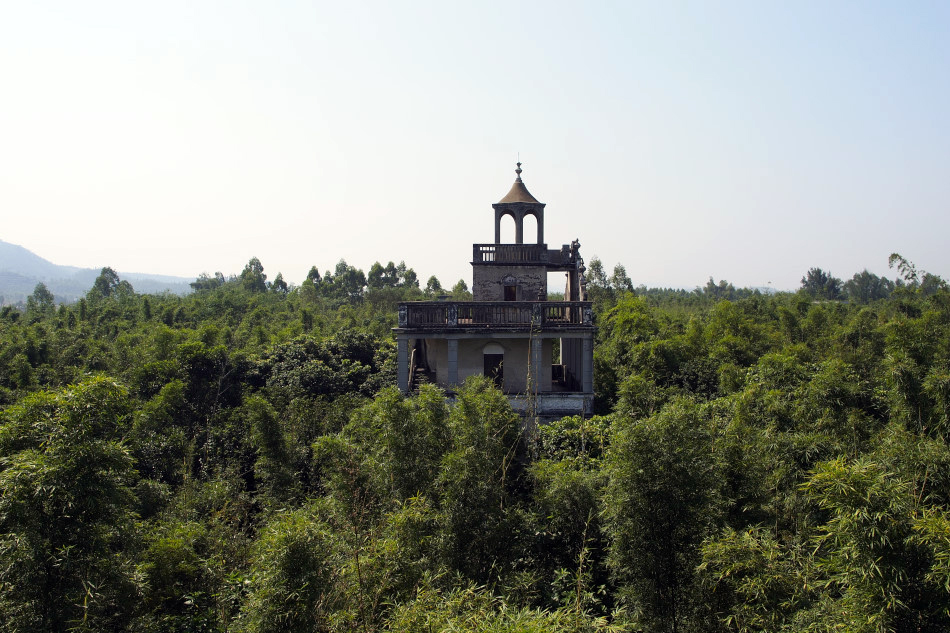 A diaolou stood in the midst of a bamboo forest. 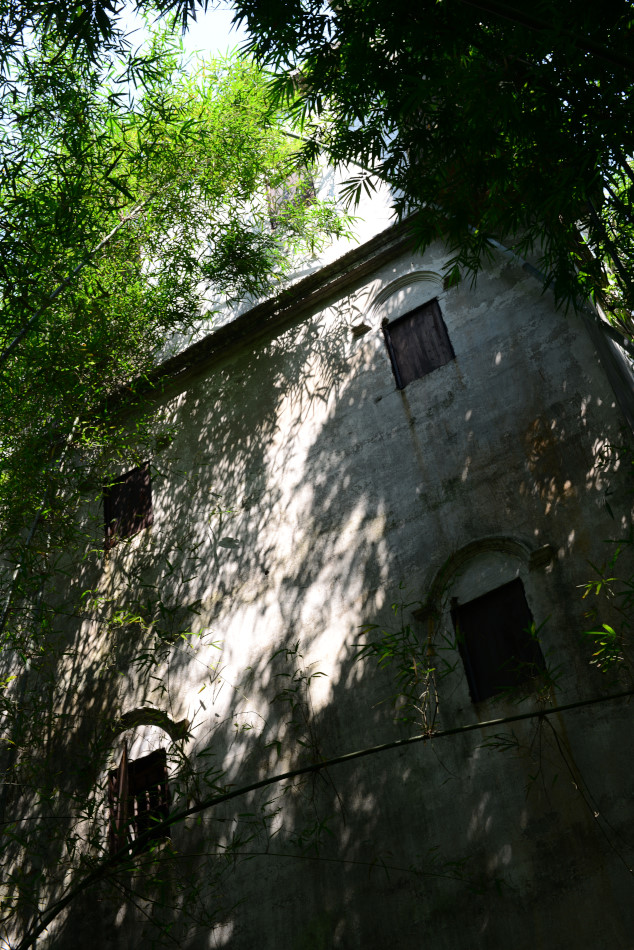 Some diaolous in Majianlong were covered in the shade of bamboo for most of the day. 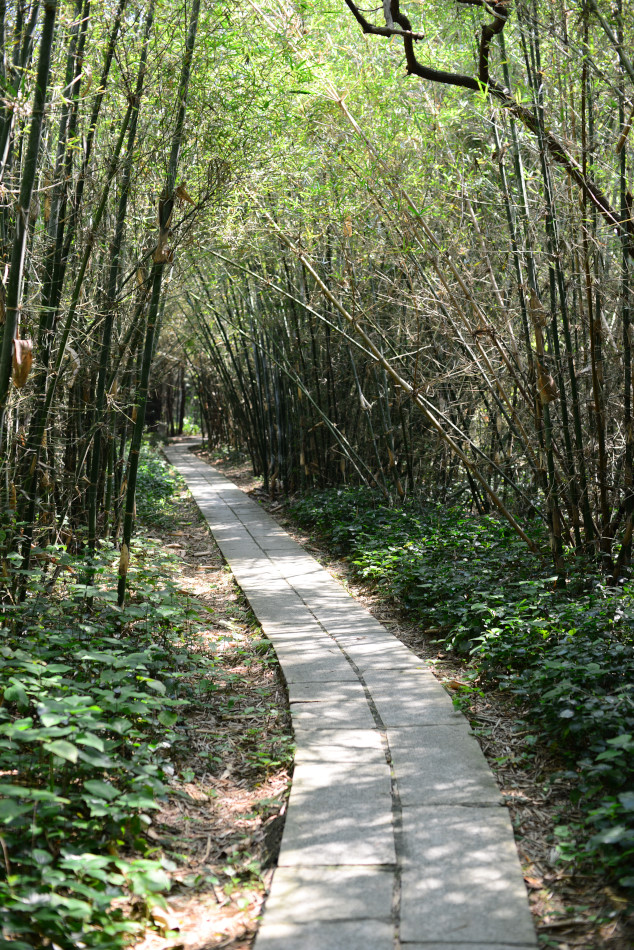 Walking on the footpath under the bamboo shade was pleasant if not the occasional mosquitoes. 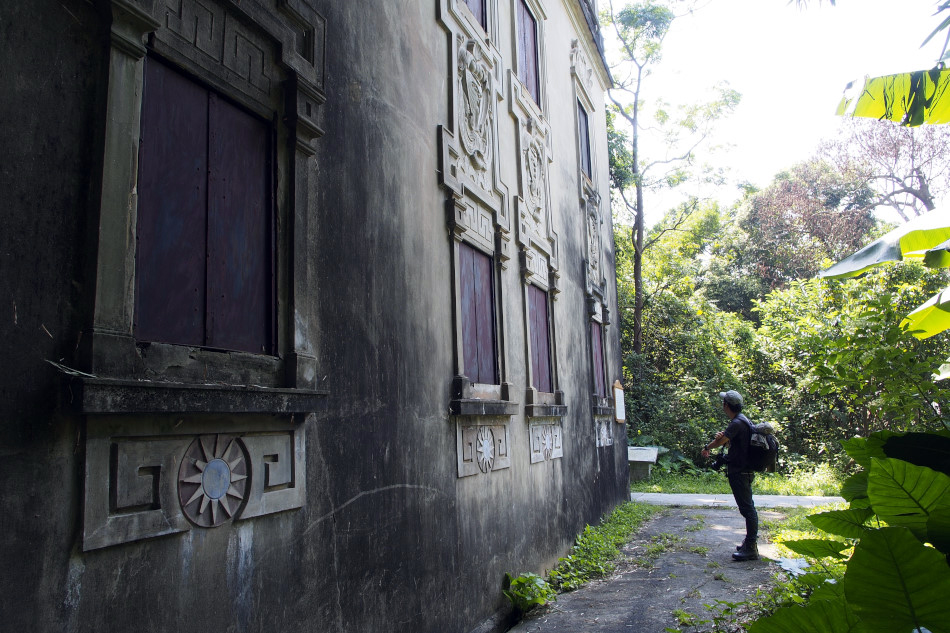 Because of the humidity and lack of maintenance, the exterior walls of many diaolous were not in good shape. 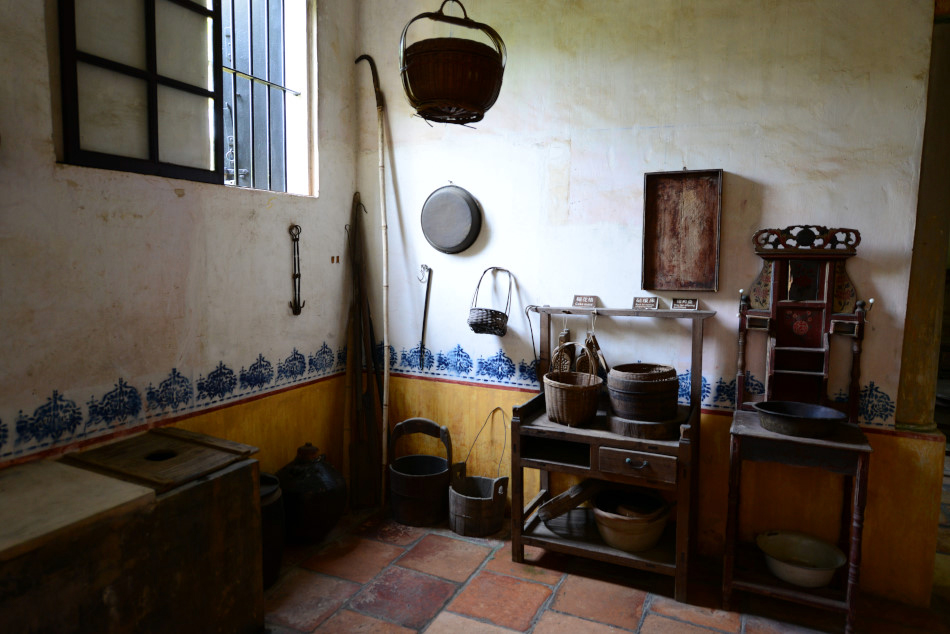 This kitchen of a diaolou looked untouched for decades. 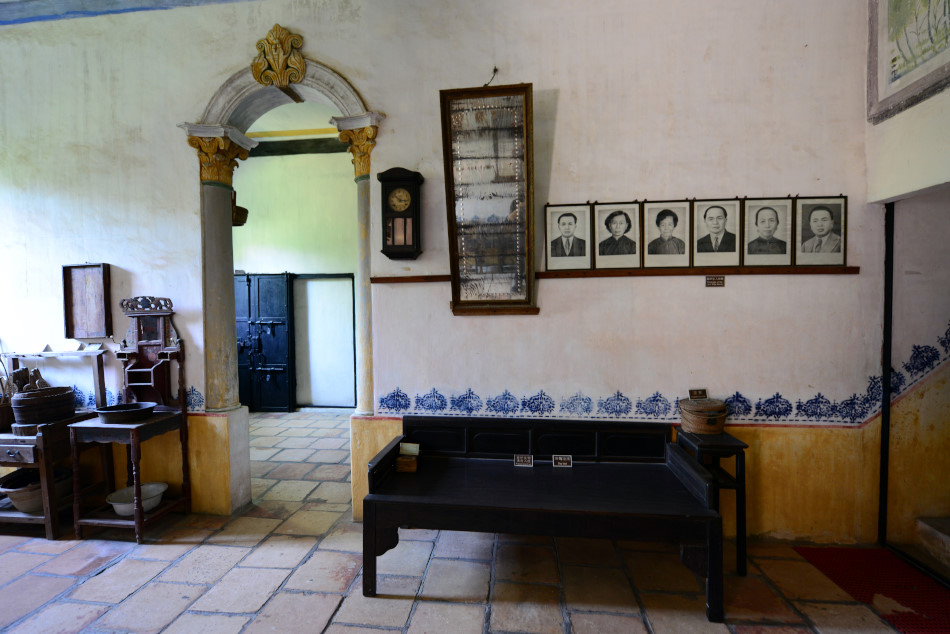 Photos of different generations of house owners could be found in many diaolous. 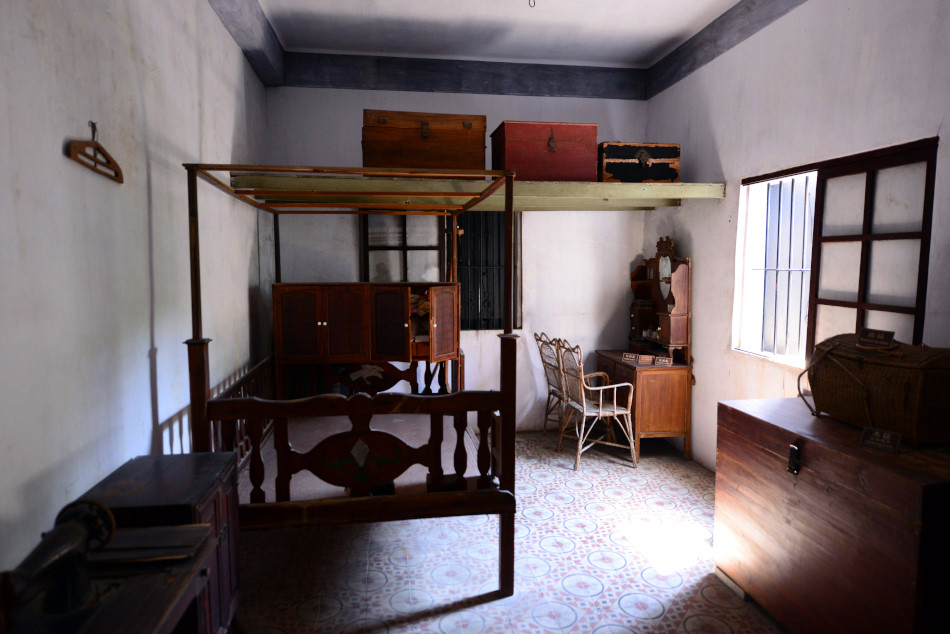 Bedroom with an overhead storage. 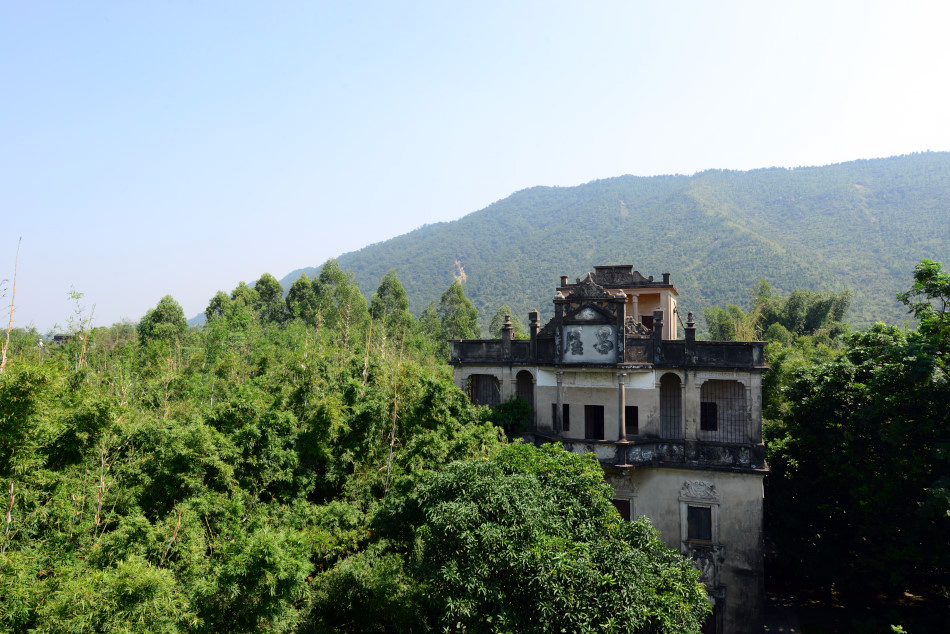 A splendid villa partially hidden in a bamboo grove. 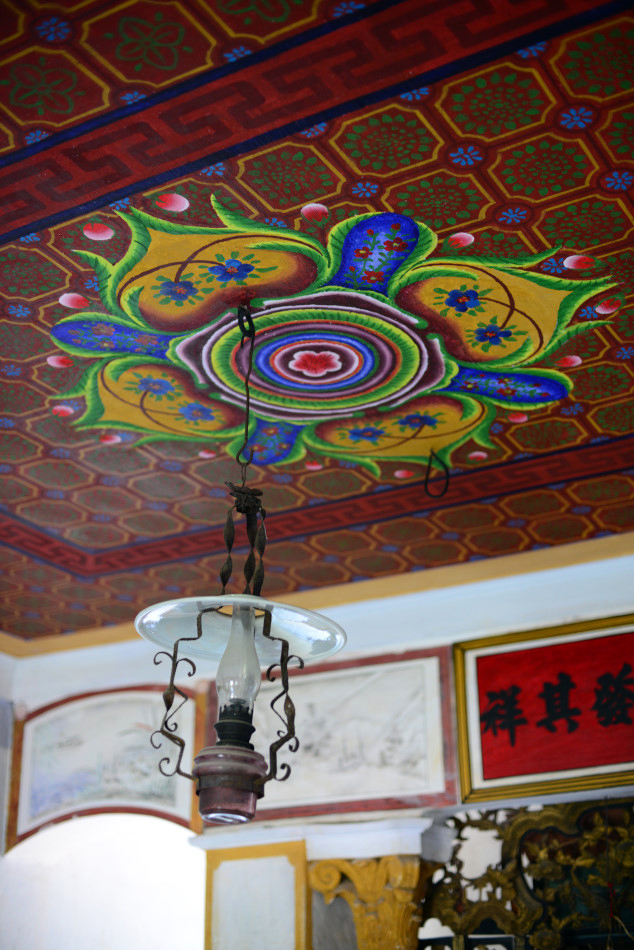 Most of the diaolou interior opened to the public had been repainted. 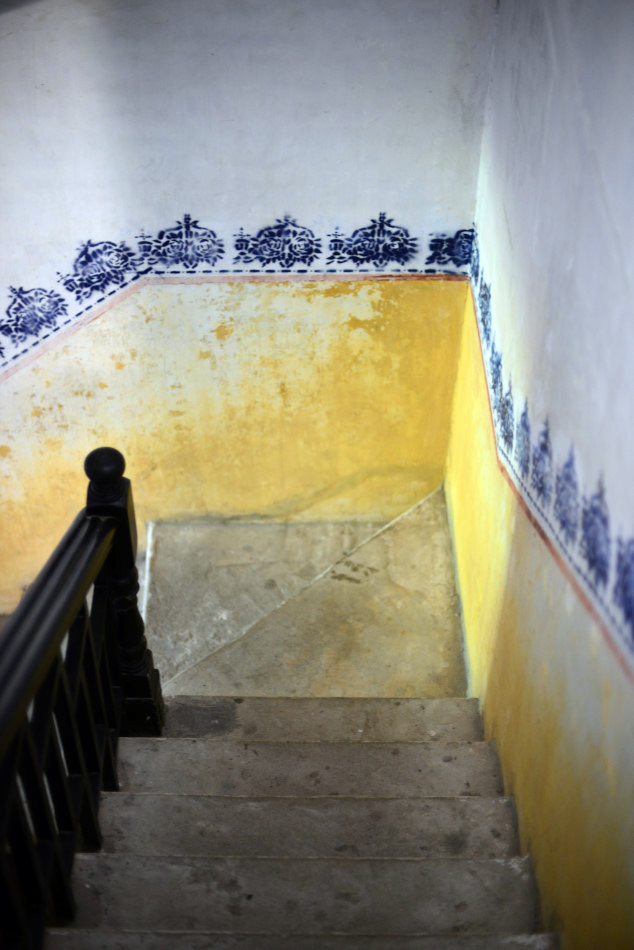 Because of its height, the main stair of a diaolou was an essential element of the building. 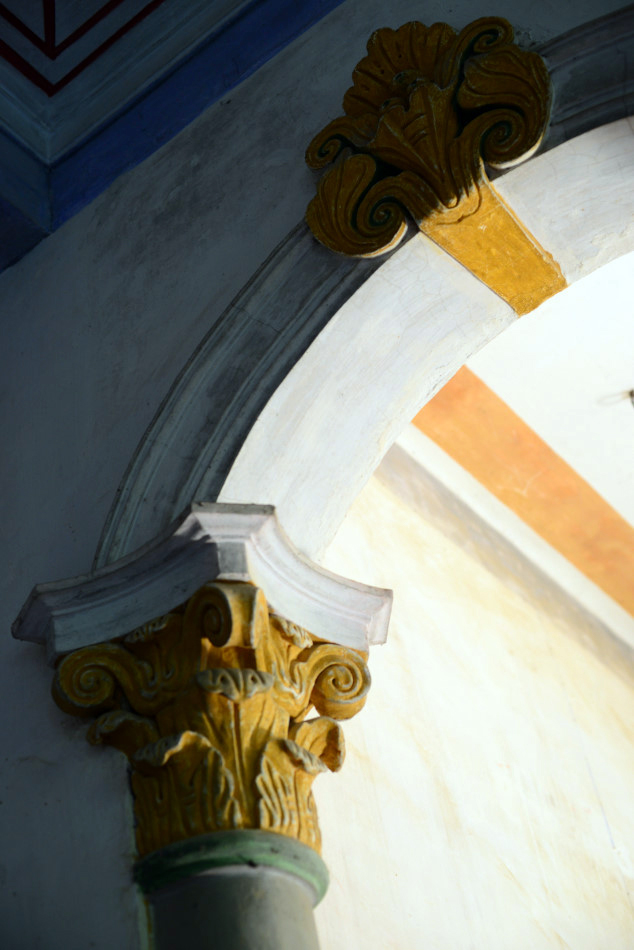 Classical keystone and column capital were popular back then. 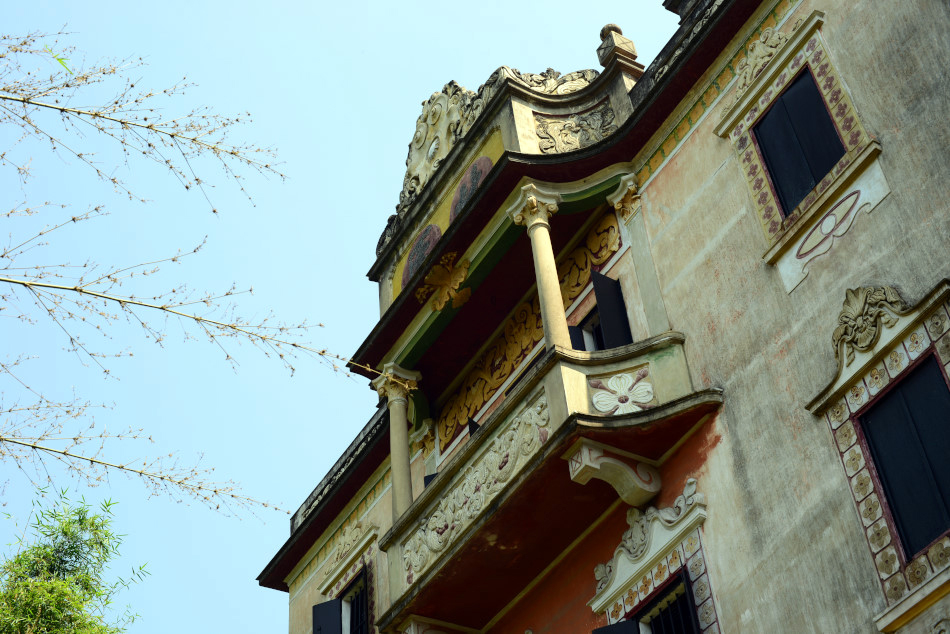 Splendid balcony of a diaolou. 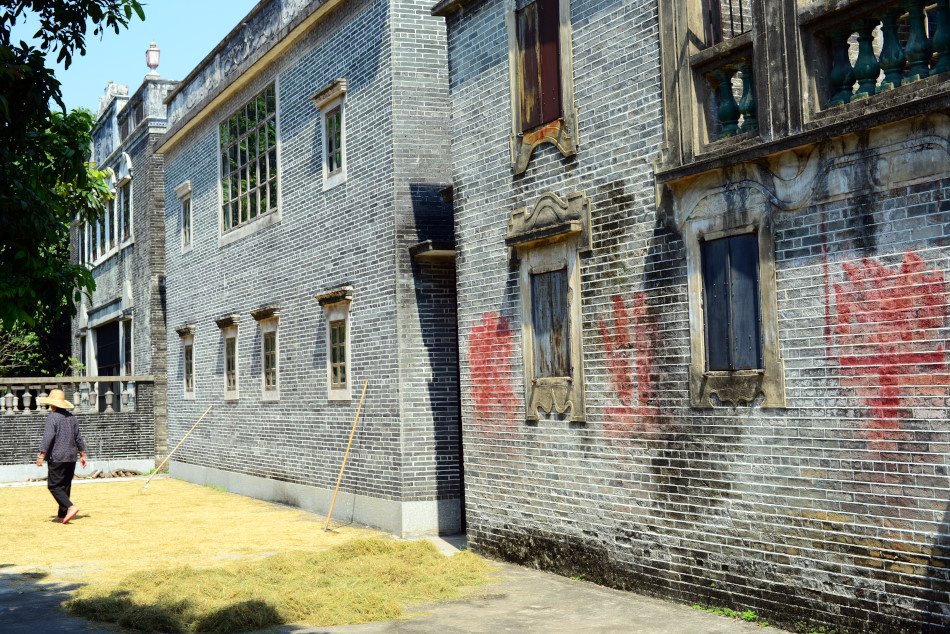 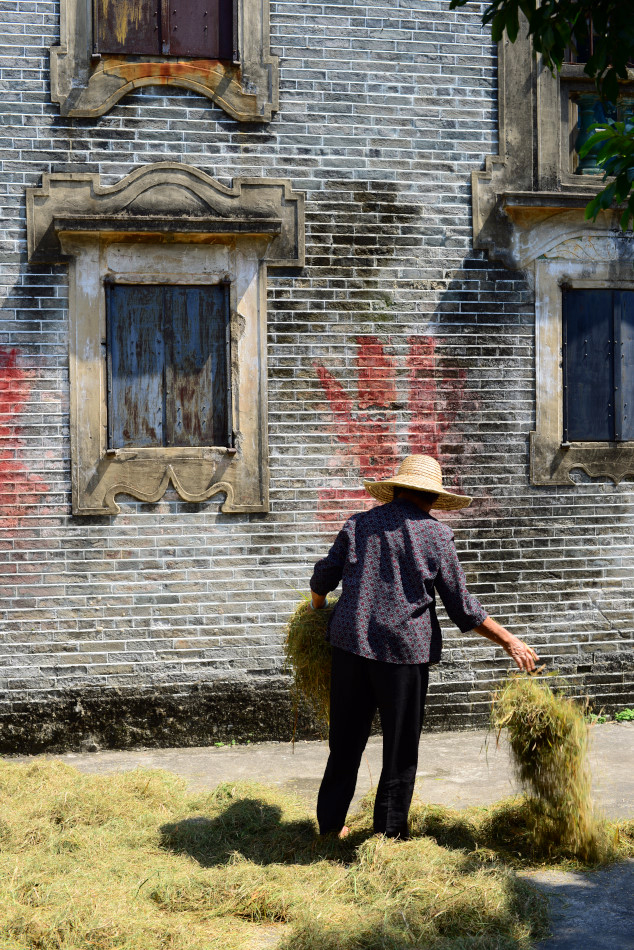 We encountered a lot more villagers in Majianlong than in Zili.

This entry was posted on March 12, 2016 by Blue Lapis Road. It was filed under China, China: Kaiping and Guangzhou 2015, Guangdong and was tagged with Chikan, diaolou, 馬降龍, Guangdong, Kaiping, Majianlong, rural, villa, village.