Chikan (赤坎) is a historical town in the County of Kaiping.  It is also a convenient hub for visiting the villages of diaolou (碉樓) in the area.  From Kaiping City, we took one of the many local buses to reach Chikan in about half an hour.  Out of the bus window, the well preserved colonnaded buildings or qilou (騎樓) took us by surprise.  The vintage atmosphere of the streets and lanes in Chikan made us imagine that we were going back in time, to the early 20th century.  Streets after streets of qilou buildings, two to three storey high, lined along the main thoroughfare.  Rusty metal doors, broken window panes, darken plaster walls, most of the qilou buildings looked well past their prime.  From the occasional stained glass windows and ornate plaster motifs, Chikan must have seen its splendid moments in the first half of the 20th century.  Despite some were fenced off, on the ground floor of qilou we could still find all sort of local shops serving the remaining population of this historical town.

During our day and a half in Kaiping, we often found ourselves returning to Chikan to switch transportation.  Many local visitors came to Chikan to visit the small but famous movie studio where a number of TV shows and movies were filmed, including Wong Kar Wai’s The Grandmaster.  We did, however, find the streets and lanes flanked by qilou buildings far more interesting and photogenic.  During our first visit, after wandering through its streets and lanes, at the ticket office of Chikan Film Studio we bought a combined ticket that covered some of the most popular villages in the area.  We then hopped on a tourist shuttle bus for Zili Village for our first taste of Kaiping diaolou.

Qilou (騎樓), also known as tong lau (唐樓), was greatly inspired by Western arcade design and traditional Chinese mixed use buildings, exemplifying a hybrid design culture once flourished in urban areas of the Guangdong area.  During the 18th and 19th century, Guangzhou was the only port city in China designated for international trading.  European architectural styles flourished in Guangzhou and spread around the province.  Henceforth, qilou architecture emerged with shops on the ground floor and two to three levels of residences atop as the most common style of Lingnan (嶺南) architecture.  Many qilou buildings in Guangzhou and nearby cities didn’t survive to this day, but Chikan still has some of the best preserved streets of continuous qilou buildings found nowhere else in the province.  The Westernized qilou of Chikan reminded us its heyday when about 80% of the town inhabitants had connections with the Western world.  They either studied or worked abroad during the turning of the 20th century when emigration was common in this part of China. 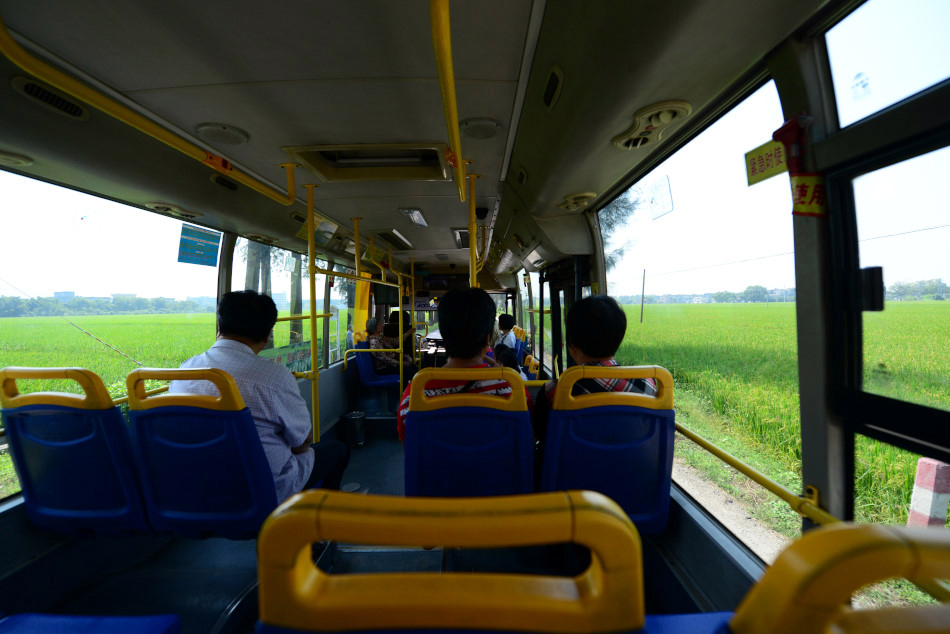 There are a number of local buses connecting Kaiping City with the Town of Chikan.

There are many villages with diaolou and rice paddy fields along the way between Kaiping and Chikan.

The first sight of the well preserved qilou of Chikan was really impressive.  Like Hong Kong and Taiwan, many shop signage were written in traditional Chinese, suggesting their long history that predated the Communist takeover in 1949. 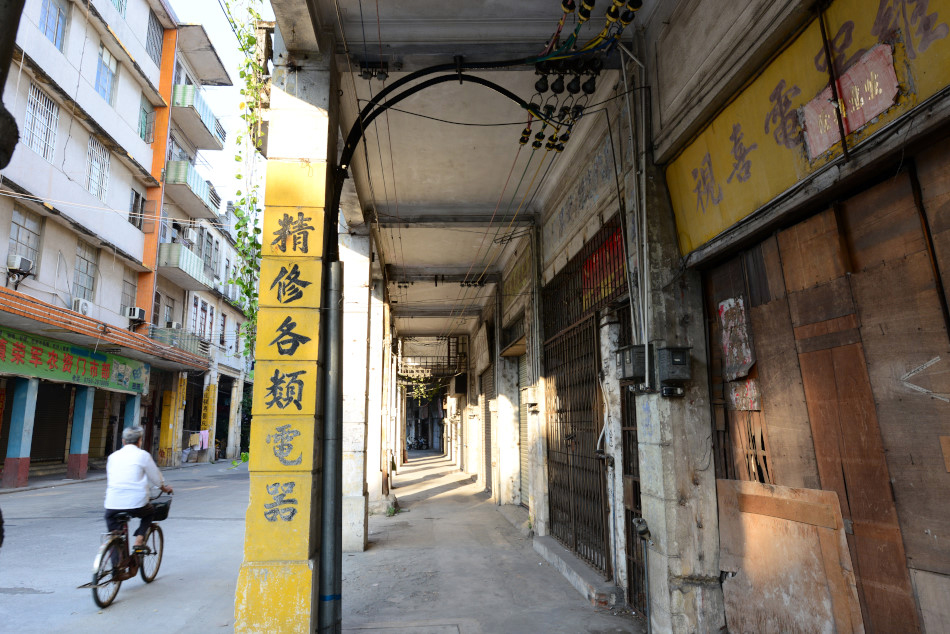 Many qilou arcades in Chikan are continuous and hardly changed a bit since early 20th century.

Apart from the ground floor arcade, continuous balconies were also common in Chikan. 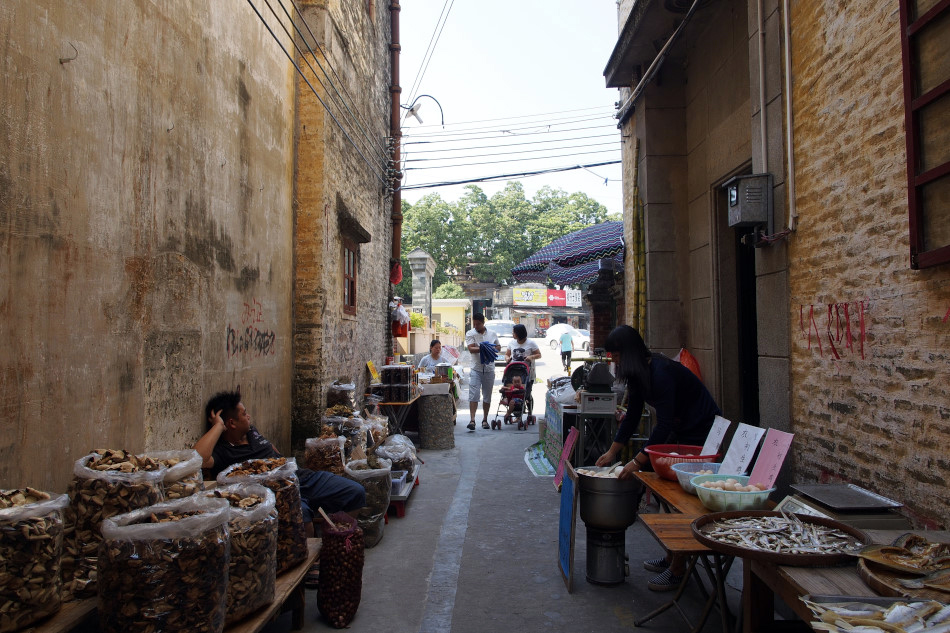 Vendors were selling dried tangerine skins (陳皮) from Xinhui (新會), fresh eggs and dried fish along the lanes of Chikan. 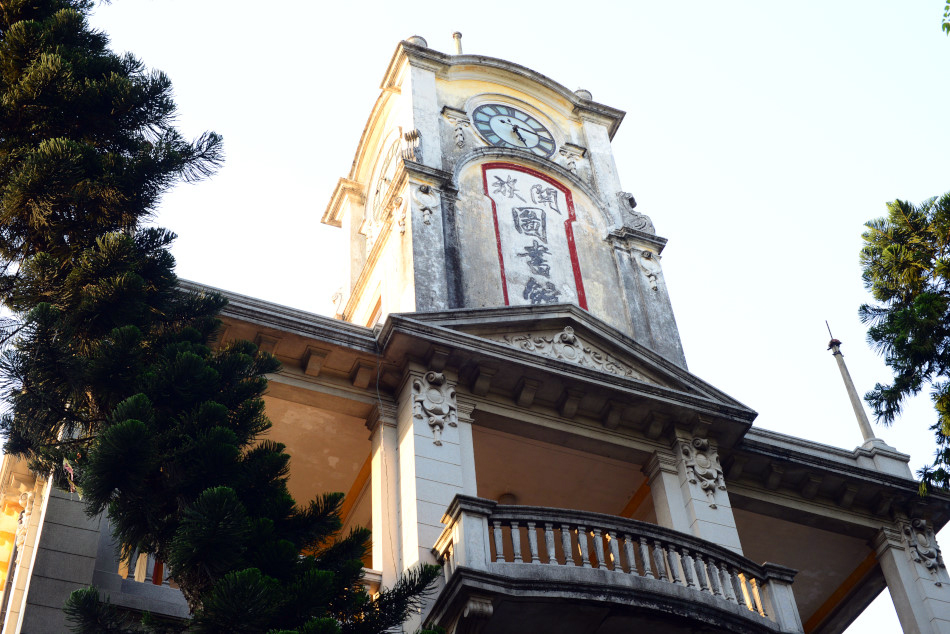 The library of the surname Kwan (Guan) was one of the two well known old libraries in town.

The splendid but abandoned buildings in the town centre revealed Chikan’s affluent past. 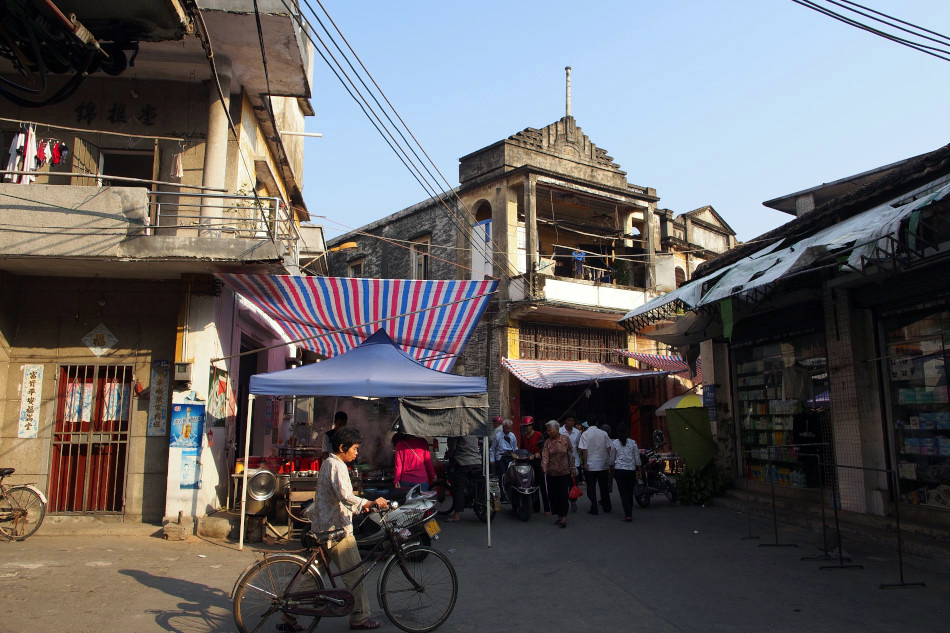 In the morning, the street market was already quite busy.

Some qilou arcades were used as semi-outdoor eateries.

Traces of paint and architectural ornaments were still visible.

The colonnaded arcades could be seen as a communal semi-outdoor space. 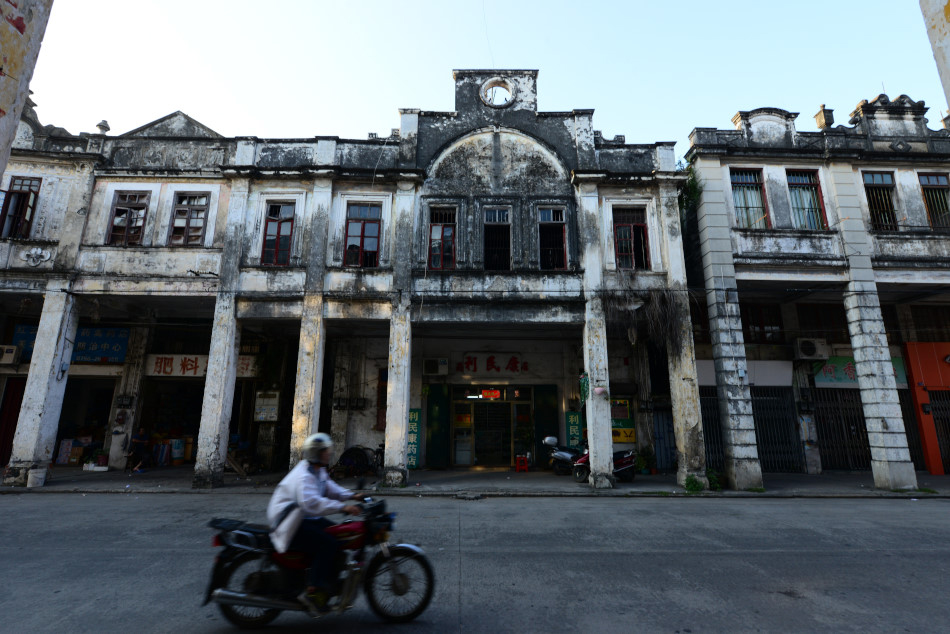 The scale of the qilou buildings is quite pedestrian friendly.

The entire downtown of Chikan is like a movie backdrop.

The continuous qilou is also a perfect backdrop for photography.

Many of the back lanes were tranquil and peaceful in the morning. 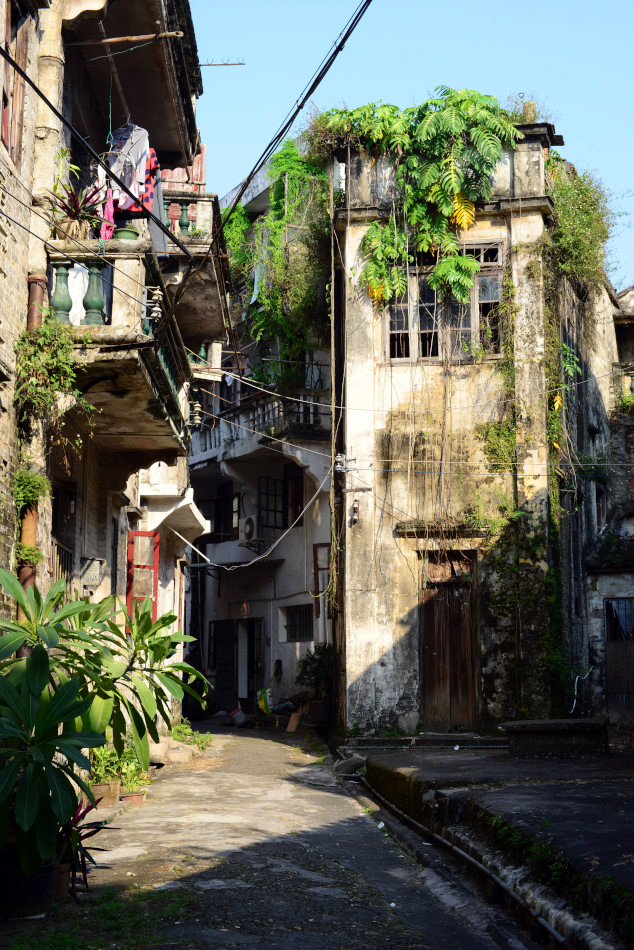 Quite a number of abandoned buildings could be found in the back lanes. 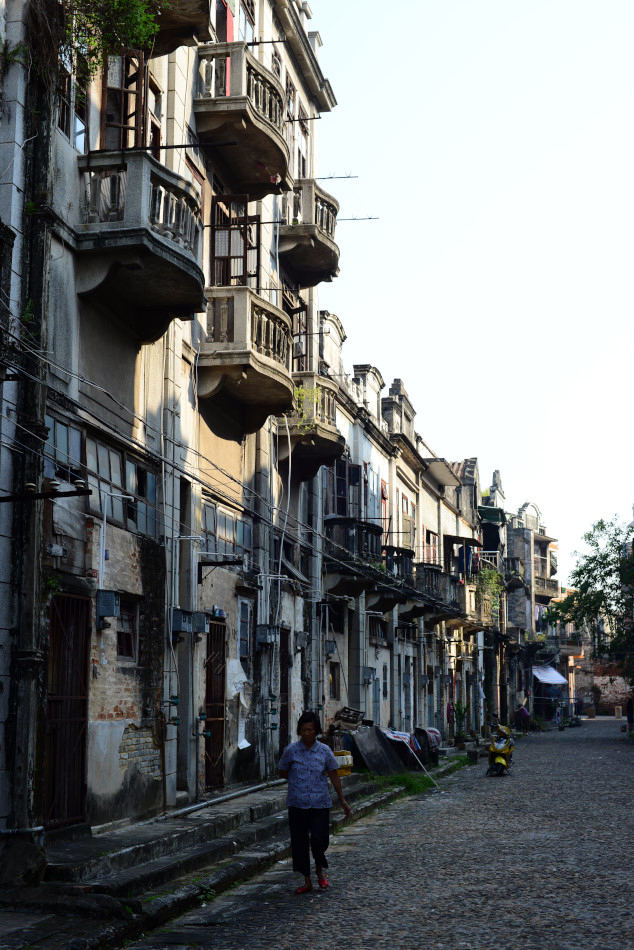 Just a block away from the riverfront tourist area, pedestrians were scarce in the back lanes. 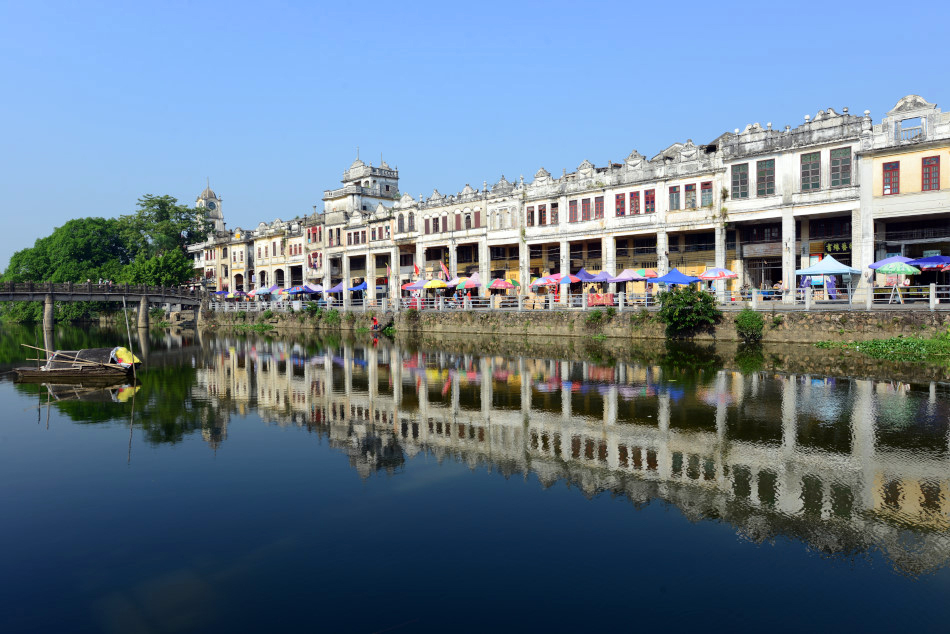 The riverside qilou is picturesque where most visitors take their postcard-like shoot of Chikan.