We got up at around 7 in the morning.  The air was cold and refreshing.  We walked down to the courtyard to brush our teeth and then into the dining room for breakfast.  After breakfast, our host suggested us to take a morning walk to the “beach”.  He gave us simple instructions and we ventured off onto the rural paths of Taquile again.  We walked to a part of the island where we had not been to before, following a winding path with a low stone wall along both sides of the path that stretched all the way to as far as we could see.  The beach was at the far end of the island. We could get a glimpse of it from the village centre. Without signage for direction and a clear path leading to the beach, we could only trust our gut to find a way to descend to the beach at the foot of the hill.

The lake water was freezing cold. Two cows were wandering on the sandy beach while we chilled out in the cool breeze.  We stayed on the beach for about 20 minutes until we decided to walk back to the village to check out the handcraft centre.  We climbed back up the hill to the main path.  The handcraft centre had a huge collection of exquisite textiles and wearable pieces handmade by the villagers, such as knitted belts and hats.  The colourful pieces are often decorated with traditional patterns unique to Taquile.  In 2005, the textile arts of Taquile was declared Masterpieces of the Oral and Intangible Heritage of Humanity by the UNESCO.  Taquile is often considered a successful example of community-based tourism.  Many islanders participate on making handcrafts for sell at the handcraft centre, or take turns to become hosts for visiting tourists.

After we visited the handcraft centre, we walked by a teenage girl sitting by the road, quietly knitting wool bracelets.  She lined up her colourful bracelets nicely on a piece of fabric for display.  The colourful bracelets had several different patterns knitted on both sides, and they all looked lovely to us.  While we were appreciating the works, a local islander waved at us from afar and he looked anxious.  He tried to tell us something important but we had trouble understanding.  After moments of confusion, we finally understood that he had been looking for us for quite sometime.  A friend of our host, he wanted to let us know that the boat leaving for Puno had changed its departure time earlier than scheduled.  Our host, on the other hand, had gone to the pier to urge the boat captain to wait for us.  By the time we were informed, we had less than half an hour to rush to the pier.  We followed the messenger’s lead to the exit archway of Taquile, where a long flight of stone steps led to the community pier by the lake.  We hurried down the stone steps in a single breath and finally jumped onto community boat leaving for Puno.  The community boat was much slower than the tourist boats, and the ride took over two hours.

After docking at Puno,  we went into a local restaurant at town centre for a big glass of warm chicha morada.  Chicha is a Peruvian drink made of purple maize with a variety of spices or fruits.  Fermented or non-fermented, chicha drinks have been popular with people on the Andes for centuries.  A glass of purple chicha morada (with spices of some sort) became the perfect conclusion for our visit to Lake Titicaca.  The next morning, we would head northwest to the historical heartland of the Inca Empire, Cusco and the Sacred Valley.

The boy of the host family was shy but curious. He invited us to play football with him at the forecourt of his house. 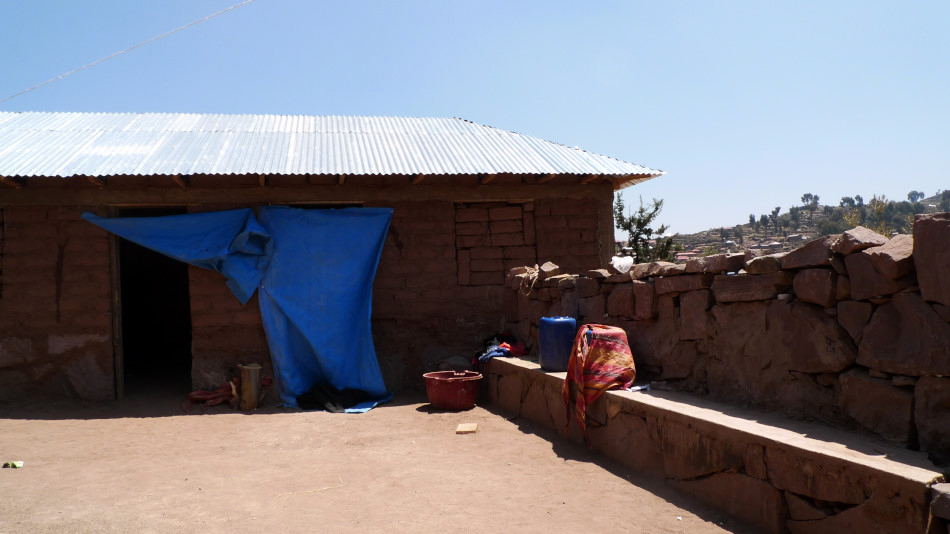 Our host’s home had a big foreground surrounded by adobe houses on three sides and a wall at the front. The forecourt is a perfect place for the kids of the family to play football.

The rural scenery of Taquile in early morning. 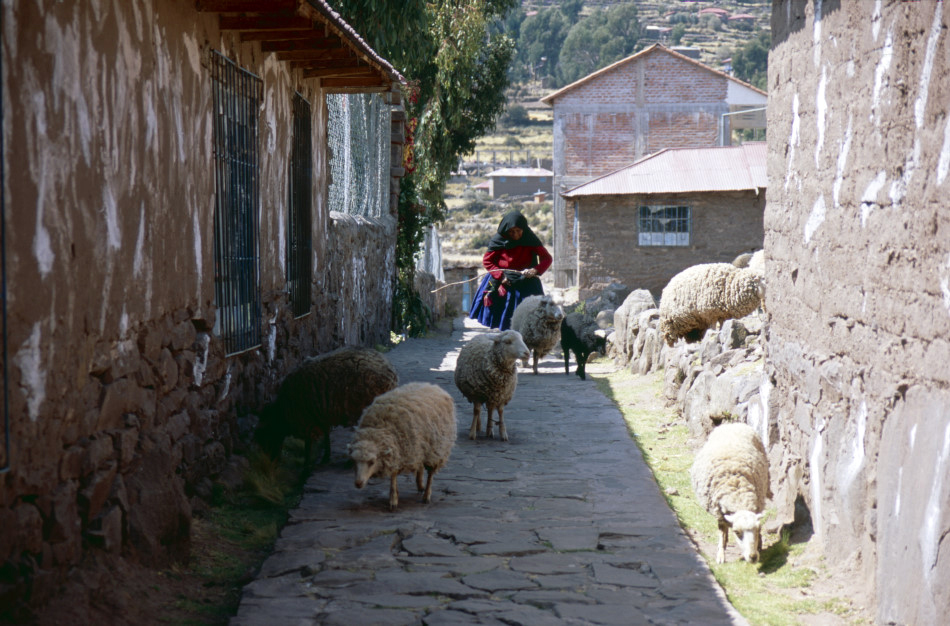 A woman with her sheep for a morning walk.

The beach that our host recommended was down the hill from the main path.

The beach is right at the foot of the terraced farmlands.

We finally reached the beach. We were greeted by a cow and its calf there. The water was too cold for a comfortable swim but the sun was warm and the sand was fine. 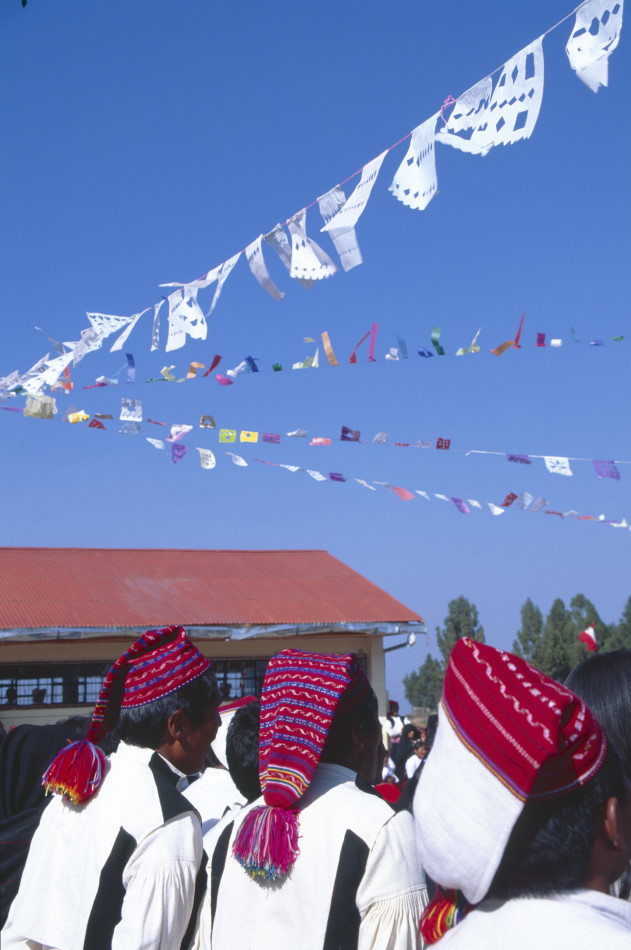 At the Handcraft Centre, we found many finely made textile items and knitwears.  Examples of Taquile’s famous knitting could easily be seen everything on the island, including the traditional headwears of the villagers. 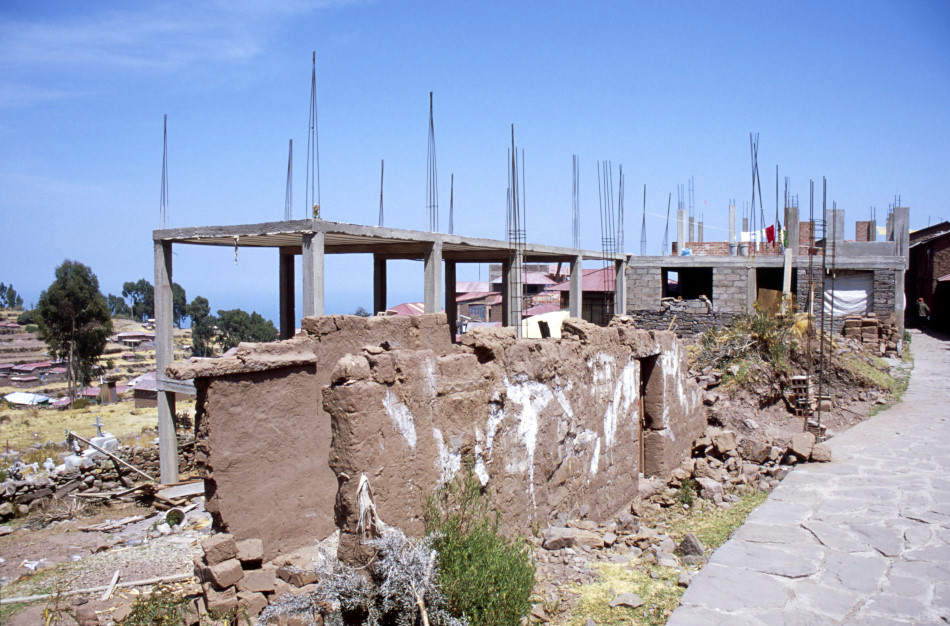 We passed by a number new buildings under construction when we rushed to the pier.  Many buildings were left unfinished until villagers saved up enough money to complete the second level.

After passing this arch, we would bid farewell to Taquile island.

Following the messenger, we hurried down the stone steps to catch the community boat.  The stepped path was long with uneven stone risers. 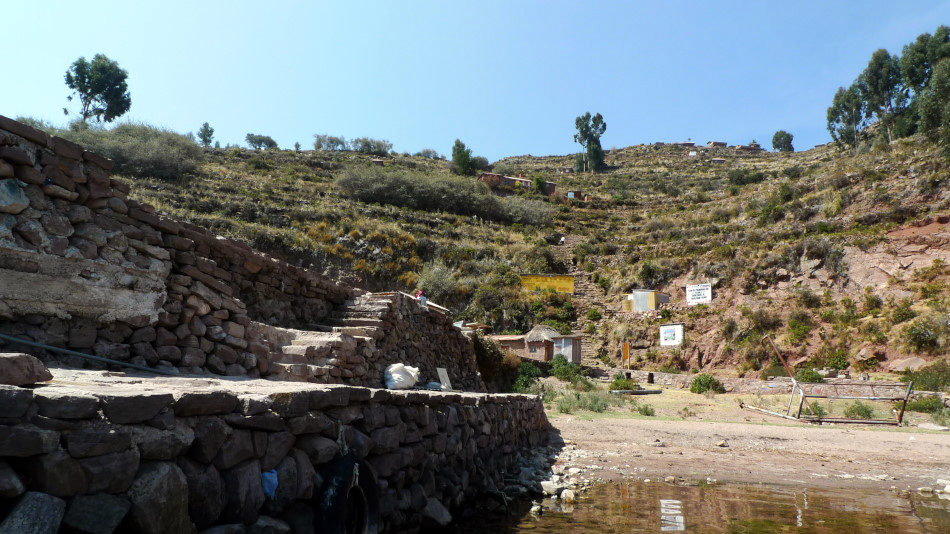 We finally made it to the pier and were amazed by the speed at which we descended the uneven steps. 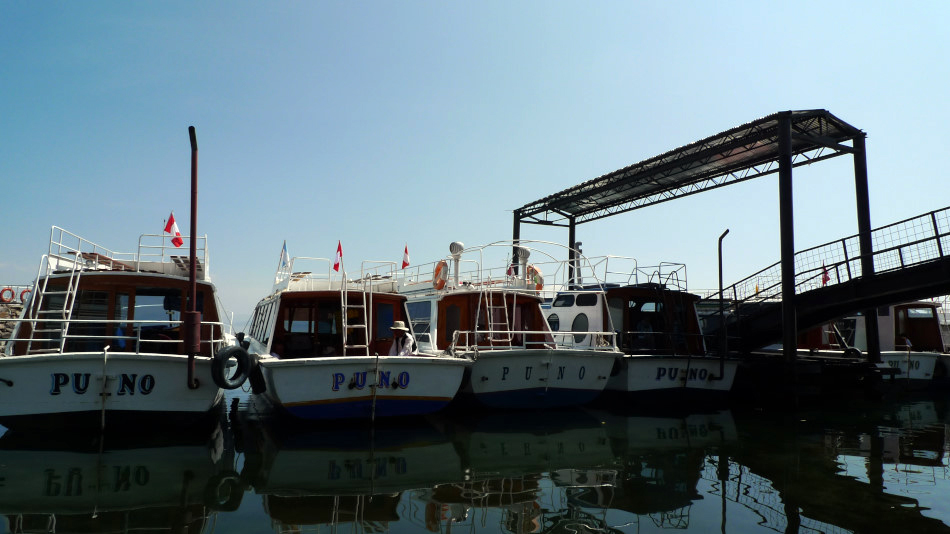 There were a few boats at the dock. The community boat left from a different pier than where we arrived a day ago.

At last, the farming terraces of Taquile Island was behind us. 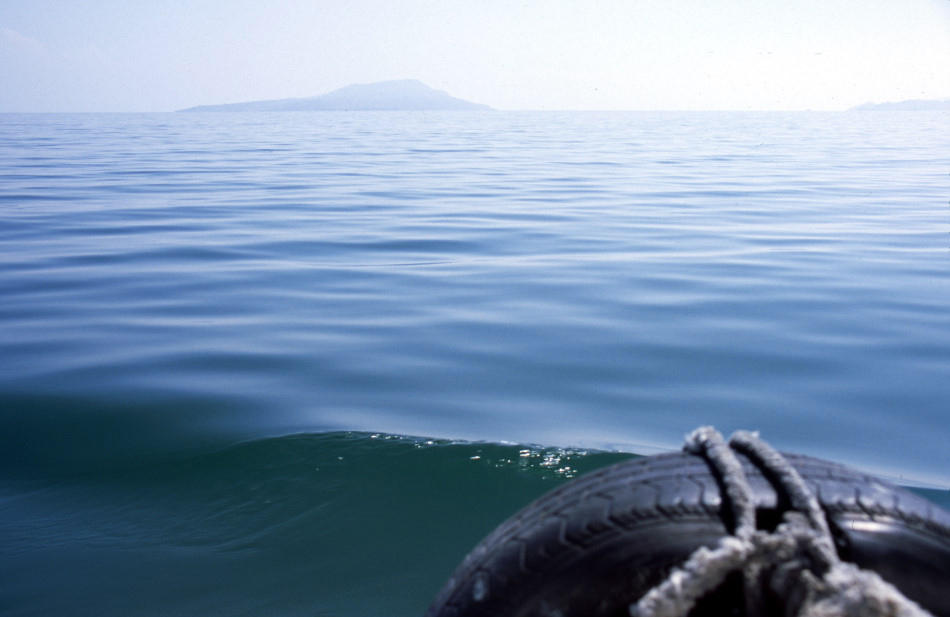 As the boat moved out to the lake, Taquile Island appeared smaller and smaller until it disappeared completely. 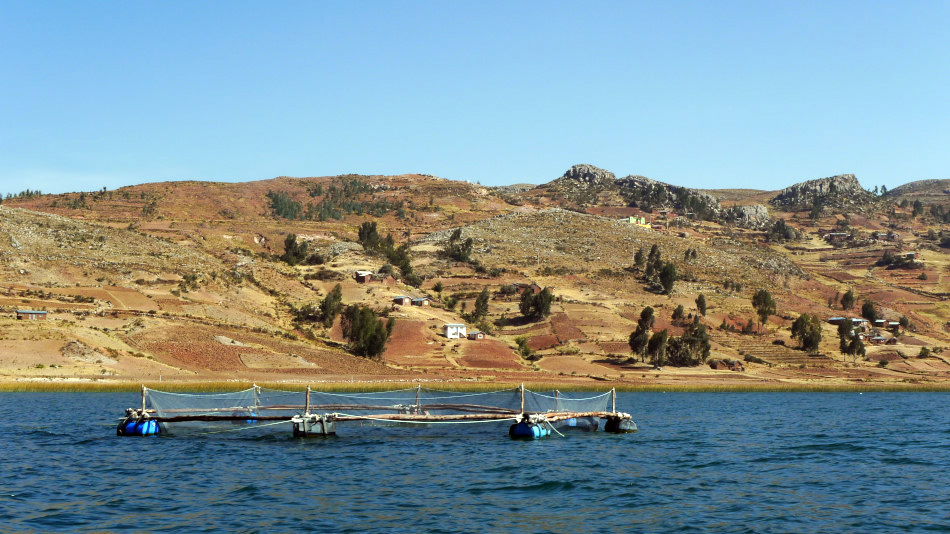 Our boat passed by some fish nets in the lake.

During the boat ride, we passed by a number villages along the coast of the mainland. 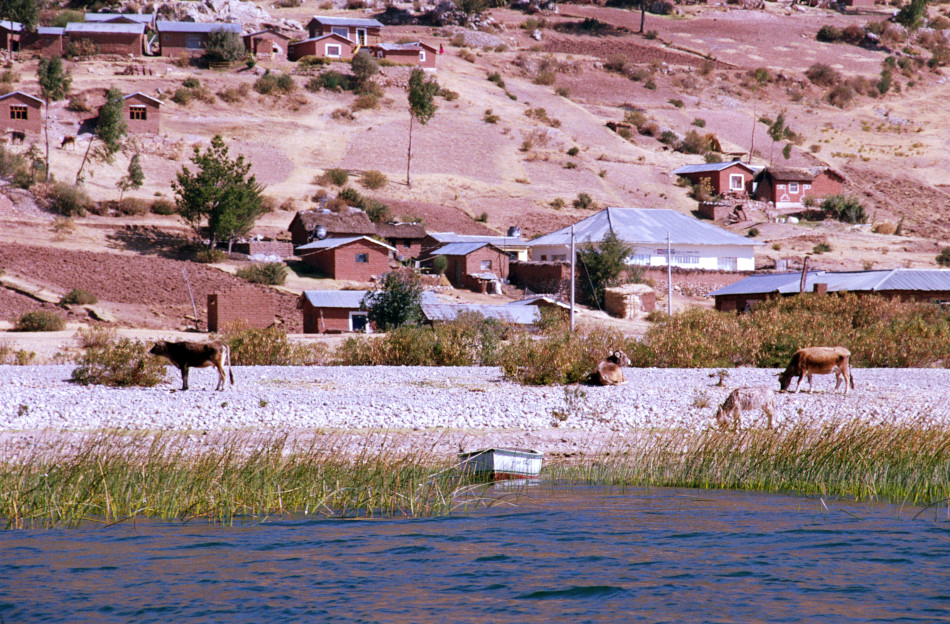 Close up of a coastal village by the Lake Titicaca.

We were sitting out on the boat deck.  After the gate marked by the light towers, we knew Puno would soon be in sight.

We arrived at Puno at late afternoon. We strolled around the market near the town centre and went into a small local restaurant for a warm chicha moranda.