Before we left the Xiangshan campus, we dropped by the new Folk Art Museum.  Designed by Japanese architect Kengo Kuma, the Folk Art Museum is the latest addition to the campus.  Similar to Wang Shu, Kengo Kuma’s work has long been considered as a contemporary representation of the essence of traditional architecture.  Last year when we were In Tokyo, we visited Kengo Kuma’s Suntory Museum of Art and Nezu Museum, and immediately fell in love with Kengo Kuma’s clever interplay of light and shadow, magnificent treatment of transitional spaces between interior and exterior, poetic arrangement of circulation spaces and contemporary interpretation of traditional Japanese architecture.

The Folk Art Museum at Xiangshan sits against a hill like a series of overlapping parallelograms.  Aligned with Kengo Kuma’s principle “to recover the place”, the spirit of the sloped landscape is carefully maintained with the cascade arrangement and ramp circulation of the building.  Old roof tiles are extensively used as roofing and also an outer screen outside the glass walls of the building.  The tiles serve the purpose as shading device by casting a myriad of floating shadows in the interior.  Their existence provokes a poetic atmosphere made of light and shadow.  Before our trip, we were delighted to find out that the Folk Art Museum would be ready to open its doors two days before our visit.  Unfortunately, when we arrived at its door, all we could see was an empty building with several installation workers inside the building.  All we could do was walk around the building and ascend to the accessible roof via a long flight of exterior stair that penetrates the museum in the middle.

After our visit to Xiangshan, we took the public bus back to Downtown Hangzhou.  We returned to the hotel to pick up our bags, took a taxi to the airport bus station, and hopped onto the bus for Hangzhou International Airport.  When we get off, the yellowish afternoon sun and a banner promoting a new direct flight from Hangzhou to Copenhagen greeted our arrival at the airport.  It wasn’t too busy in the airport concourse and we had plenty of time after checking into the waiting zone, reviewing our photographs in the cameras while waiting for our Dragon Air flight back to Hong Kong.  This concludes our 5-day visit to Anhui and Hangzhou.

The pathway that leads up to the museum entrance and entrance forecourt. 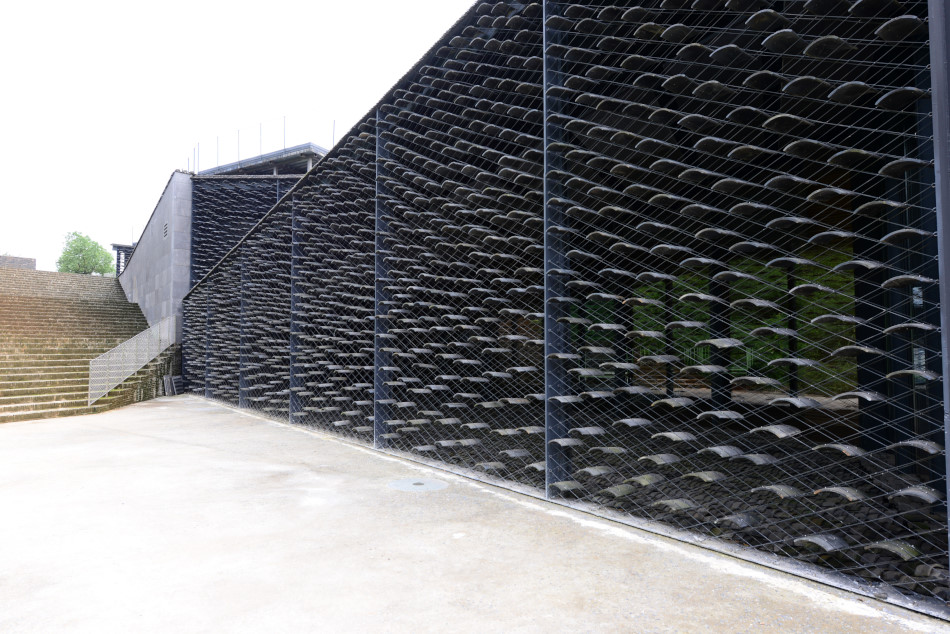 After we walked up the stair to the upper part, we reached a platform and a secondary entrance of the museum, and a stair that leads further up to the roof. 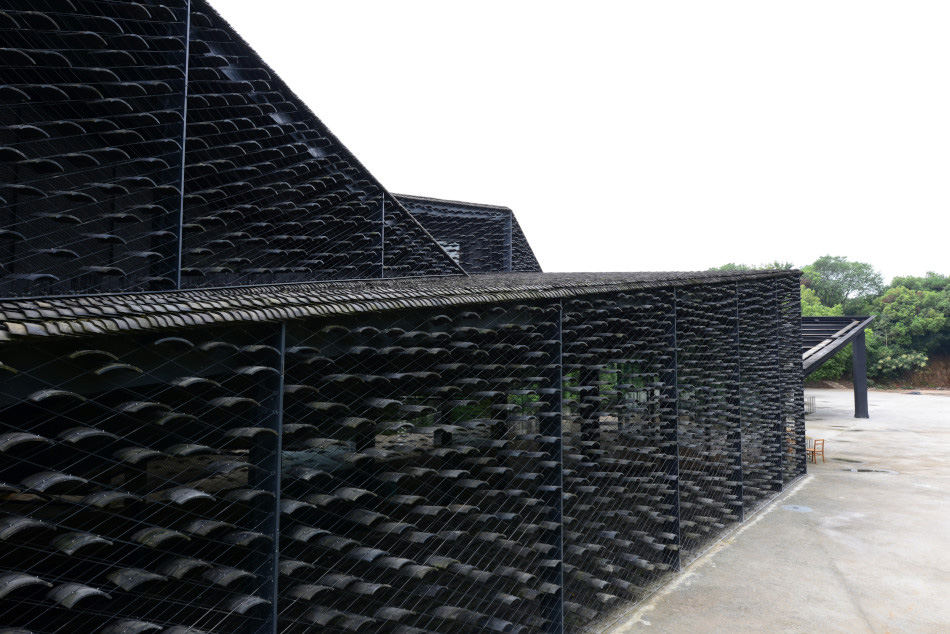 Upper platform of the complex.

A peek into the museum interior from the upper platform.

Our reflection on the glass wall of the museum beyond the screen of tiles.

Dark tiles are clipped with tiny hangers onto the diamond shaped wire system.

Space between the outer screen of tiles and the inner layer of glass windows.

Second stair that leads to the upper roof. 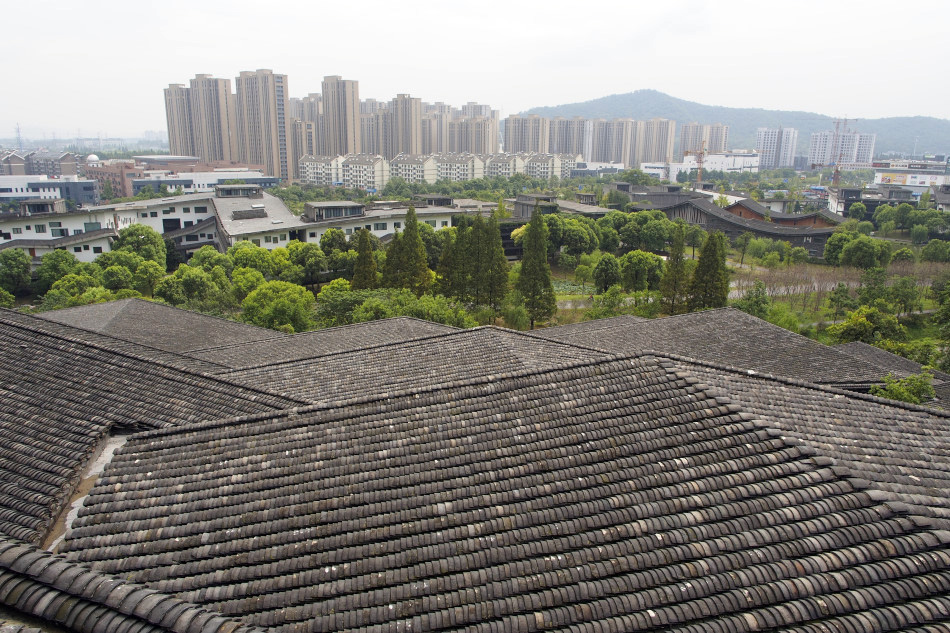 View from the upper roof down to the Xiangshan campus and beyond.

Sometimes, the tiles seem like floating in mid air.

We were forbidden to visit the museum interior, we had no choice but to return back down to the main campus after a walk around the Folk Art Museum. 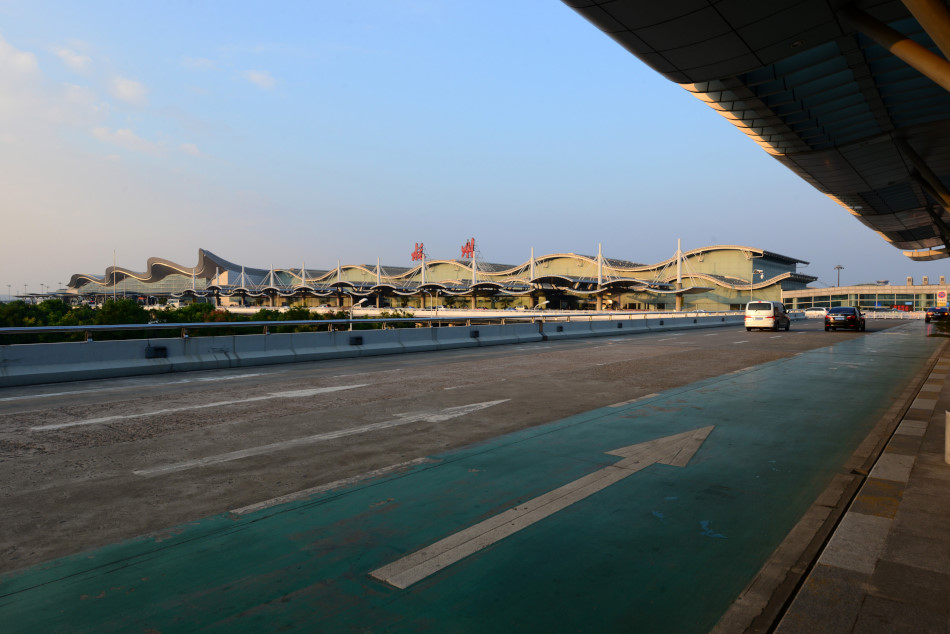 It was late afternoon when we arrived at Hangzhou Airport for our flight home to Hong Kong.